The racing for the eighth Head of the River was conducted on 14th and 15th May after a postponement on 13th May due to flooding. As further postponements were not available, two individual races were conducted.

Geelong Grammar School crew finished second to Scotch College in the first heat with Wesley having a bye. The Geelong crew had lost their original number three Cole, who was replaced by Armytage who lacked condition.

The second heat or final was raced between Scotch and Wesley with Scotch winning.

Geelong Grammar joined the competition in this year necessitating heats and finals. Geelong Grammar had commenced rowing in 1870 using Barwon Rowing Club equipment. In 1874 they purchased their own boat and established their boat club.

The Sumner Challenge Cup was presented this year for the first time and was to be won permanently by the school who should win the event three times. Scotch College won the trophy permanently. From The Age (13.05.1875) What has been known for years as the Annual Schools’ Race will know that title no more. For seven years the race between the schools has been for the mere honor, but in future the contest will be for the challenge cup, the gift of the Hon. J. T. Sumner

Melbourne Grammar did not compete this year again reportedly arising from the 1873 controversy. 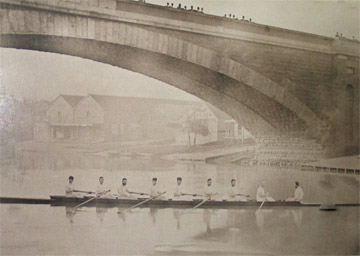 In the foreground is a Civil Service Rowing Club crew who won the first eight oared race in that year. In the background is the old Edwards boatshed.

The Age recorded the racing.

Punctual to time, the boats took their allotted stations some six yards apart, the Geelong boat taking the leading position. From the start they were outpaced, the Scotch gradually drawing on them till reaching the Baths corner, where they got on level terms, and soon passed them, winning by about four lengths.

As in the first heat, the race was a one time, the Scotch College taking the leading position, the Wesley in the rear. Both crews got off together, rowing well, the Wesley gaining slightly up the first reach. They, however, soon began to lose ground, being overmatched, the Scotchmen gradually going away up the long reach and passing their post first by some three or four lengths.