The fifty-seventh Head of the River was conducted on the Barwon being the turn of Geelong Grammar to choose the venue. The course was moved 300 yards upstream due to the demolition of the Barwon Bridge. The heats were conducted on Friday 9th May and the final on Saturday 10th May.

The event as always had many spectators. It was estimated that over 2000 vehicles made the drive from Melbourne with even more people travelling by train.

Melbourne went to the lead early with Geelong second and Scotch last. At Packington Street the same order prevailed with Melbourne leading by only a quarter of a length. At the Mills, Geelong made a huge effort to catch Melbourne. With 50 yards to go Geelong got to the lead and won by only 1 foot in a magnificant race.

The crowd probably numbered 30,000 or there abouts.

At the bridge Scotch were a length and ¼ behind. Nearing the finish Melbourne Grammar raised the rate of striking to 42, Geelong Grammar going to 40 and Scotch were rowing about 36. The Geelong boys, however, had more power behind their blades, and they gradually wore the leaders down, and won on the post by a foot. There was a wild outburst of cheering when the white flag went up to denote a win for Geelong Grammar. 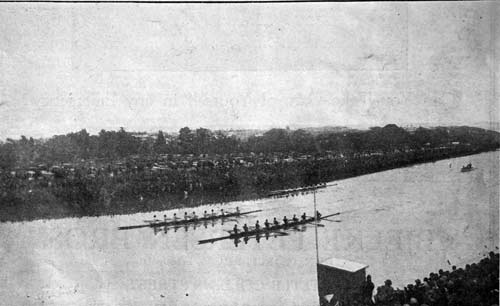 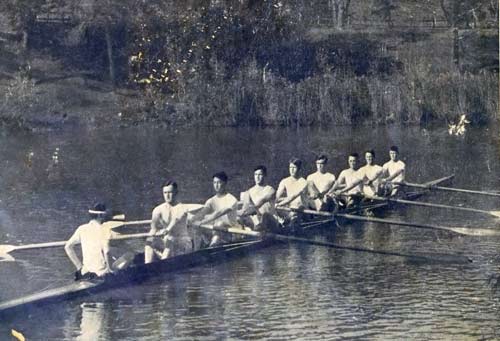 From Lift her home to victory, lads! A centenary history of Xavier College Rowing by Michael Lefebvre

The Age reported on the heats extensively.

Scotch had the south and Xavier the centre station, and Mr. Speed had no difficulty in sending the crews off to a fine start. Xavier started at 39 and Scotch at 38. A minute from the start Scotch, rowing at 35, were a few feet to the good. Xavier had slowed to 36, and the blade work of both crews was very clean. Scotch reached Pakington-street in 2 min 40 sec, and were about ¾ of a length in front. Coming on to the temporary bridge it was noticed that the time in the Xavier boat was not good, whilst Scotch were rowing with excellent blade work, and passed under the bridge a length and a quarter in front. Nearing the finish Xavier quickened to 40, and Scotch 38, Xavier drawing up slightly but were still a length behind when the gun was fired. Time: 5 min 32 3-5th sec

Melbourne Grammar were on the centre station and Geelong College on the south, and there was a slight delay in getting the crews away. Both crews started off at 40, and at the end of a minute’s rowing the Melburnians had a few feet advantage, rowing at 37, the College rowing at 36. The two crews reached Pakington-street on level terms in 2 min 42 sec. Melbourne Grammar rowing a couple of strokes faster than the Geelong boys. Coming to the bridge the Geelong boys were slightly in front, rowing the slower stroke and with a nice east action. Grammar however were determined not to give an inch away and sprinted. The effort brought them level, and they shot the bridge a foot in front of the College boys, despite the fact that their boat rolled a little. Immediately after passing the bridge they began to work up the rate of striking, and finished at 40, rowing a very short stroke. Geelong College finished at 37, and Grammar secured the judge’s verdict by the small margin on six feet. Time 5 min 34 1-5th sec

In the third heat Wesley were on the south and Geelong Grammar the centre station. There was no delay in getting the crews away to an excellent start. Wesley went off at a cleanly rowed 42, and gained a few feet on Geelong Grammar, who started at 38. Geelong Grammar however soon made their weight felt, and were level at the end of a minute’s rowing, striking 34 to Wesley’s 36. At Pakington-street, reached in 2 min 42 sec, Wesley were about a foot or two in front. It was noticed that the blade work in the Wesley boat at this point was excellent, the blades being ripped through smarter and cleaner than in the Geelong boat. Nearing the bridge the light blues made a great effort, and though not rowing as cleanly as Wesley, their superior weight began to tell, and they shot under the bridge 5 feet in front. Wesley responded gamely, but were a trifle too powerful, and they had added another 3 feet onto their lead when the finish was reached. Both crews were striking 33 at the finish. Time: 5 min 30 4-5th sec. 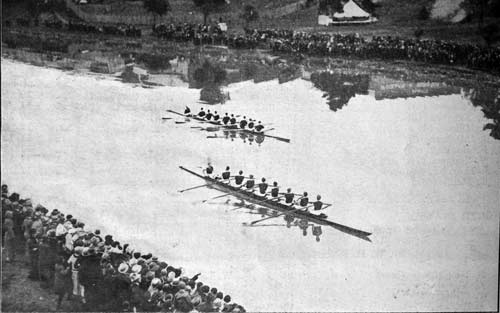 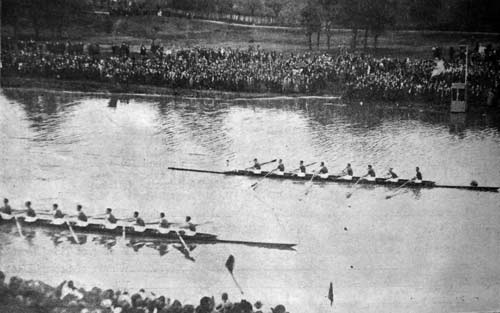 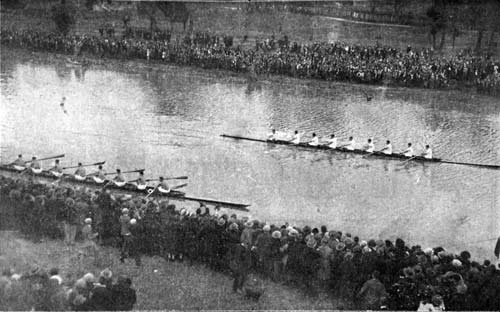 (Not conducted at the Head of the River regatta. Second and Third crew races were conducted on 3 May on both the Upper Yarra for metropolitan schools and the Barwon for the Geelong schools.)

(Not conducted at the Head of the River regatta. Second and Third crew races were conducted on 3 May on both the Upper Yarra for metropolitan schools and the Barwon for the Geelong schools.)