The seventy-third Head of the River was conducted on the Upper Yarra on 26th and 27th April, three weeks earlier than normal.

The war was impacting most parts of life but in this year, it had little impact on rowing. Both the Head of the River and Junior Regatta were undertaken in the same way as before with one exception. The Scotch Collegian of May 1940 described the arrangements for the Junior Regatta in stark words: ...the arrangements for the Junior Regatta was transferred in somewhat unprecendented fashion from the hands of the Captains of Boats to the control of a meeting of "Rowing Delegates". The meeting decided to hold the Junior Regatta on April 20th a few weeks earlier than usual, and to limit it to five races, instead of the usual half-dozen or more, "Unofficial" races were arranged for the Eights and Ninths on the afternoon before the regatta.

The MGS were regarded as not smooth but very relaxed coming forward, thus enabling a high rate whilst looking very relaxed. They gained half a length by the half mile and increased it to 2 lengths coming out of the bend. From that point MGS were being slowly caught up but were in never serious danger. It was a superb race by MGS.

The former Government Printer, Mr. Herbert Green, one of the lightest oarsman to have won an Australian eight-oar championship, despatched the crews to an excellent start. Strangely MGS, holders of the Fairbairn Cup, had the slowest rate of striking with 38. Geelong were fastest with 41, and Scotch 39. The Melburnia, the Dark Blues’ shell, was a third of a length ahead of Geelong Grammar at 100 yards, with Scotch a canvas back last.

At Morell-bridge, MGS, rowing with power, increased their advantage to ¾ of a length from Geelong Grammar. It was evident here that they already had the race well in hand. As the leaders emerged from the bridge, MGS coach Mr. Ricketts spoke to them, and immediately the rating was increased, and, rowing with added vigor, the crew pulled away to a lead of 1 ¼ length at the quarter mile.

Scotch, rowing with clean blade work, drew on Geelong Grammar as the Light Blues increased their rating, and lost form momentarily. With the advantage of the inside running, Scotch and Geelong Grammar gained slightly on MGS, but it was only for a few strokes. When the crews approached the straight for the drive home, MGS, with a lead of ¾ of a length, passed the half mile post in 2min 21 4-5th sec.

Entering the last straight, Hoffert set his crew the almost perfect stroke, with fine length and plenty of vim. The Melburnia began to draw away again. Over the last 300 yards, Scotch drew level for the first time with Geelong Grammar. Scotch increased their rating in an effort to catch the leaders, but it was a hopeless chase, and Melbourne Grammar stroke quickened, and the cox called for a half dozen strokes to send the boat flashing over past the line with a margin of 1 ¼ length. Scotch were challenged in the final stages by Geelong Grammar, but raced into second place with a canvas to spare. Time: 5min 4.2sec. 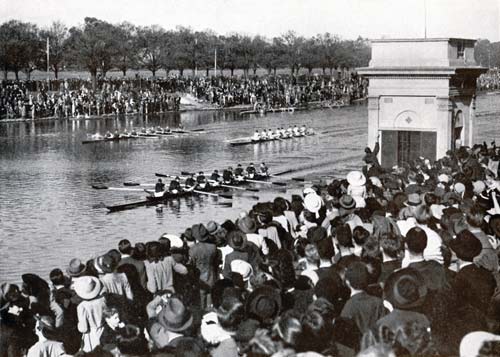 Melbourne Grammar winning the 1940 Head of the River 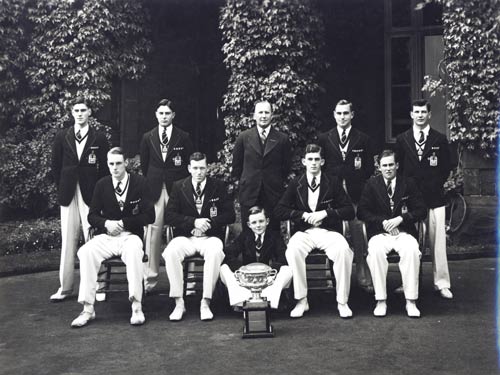 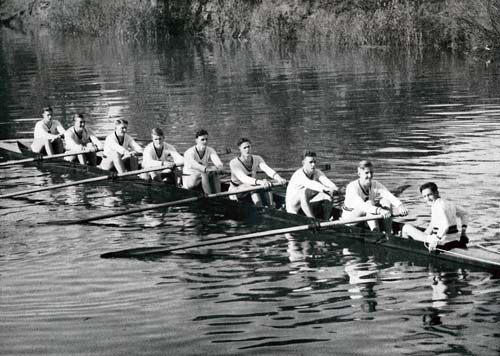 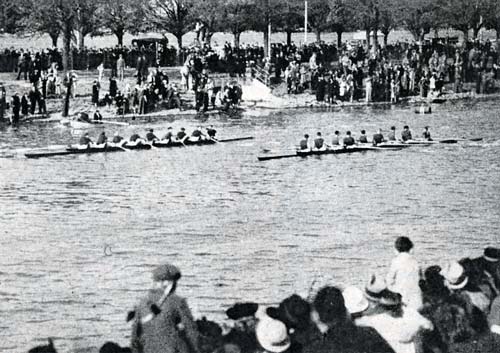 Scotch College win heat one of the Head of the River

Photo from The Scotch Collegian

“Over 30,000 people distributed along both banks of the yarra”

Wesley proved livelier at the start and led Scotch by 2 feet after the first 100 yards. Both crews splashed a lot and the boats were rolling. Wesley gained another couple of feet before passing under Morell-bridge. As the crew raced through the cox called on it for a little extra, and Wesley emerged with a canvas to spare. Scotch then lengthened out and steered a straight course to make the most of the bend. Here Wesley floundered a lot and lost much running. In the race to the half mile, Scotch drew level with Wesley, and rowing with dash gradually gained on its plucky rival. The boats seemed to be heading for a collision, which was averted at the last moment.

It became a terrific struggle, and Scotch on the north station had a clear lead of a canvas as the crews raced stroke for stroke. One hundred yards from the line the Wesley stroke called for one last desperate effort, and the Wesley boat was seen to be rapidly gaining on the “Jeannie Jamieson”, the Scotch shell. A dead heat seemed probable, but just as the Scotch oarsman crabbed their boat they flashed past three feet ahead. Time: 4 min 53 4-5th sec.

Geelong Grammar led Xavier from the start and struck faster than its opponent, which splashed a lot. Four of the Xavier crew were suffering from colds, and the stroke had a slight attack of influenza. Geelong forged ahead and passed under the Morell-bridge with almost half a length advantage. It then settled down to a good swing, with the legs driving down solidly. Then Xavier stroke quickened in an effort to draw on Geelong, but the effort was unavailing. The Light Blues actually slowed their rate and swung in fine unison. Rowing well within themselves, Geelong sprinted to the finish and won by 1 length and a quarter, with something in hand.

Although the Geelong College struck faster than the favorite, MGS, the latter had a handy lead of half a length at the Morell-bridge, passed in the same time as Scotch. Frequently the crew in the centre leads at the bend, but on this occasion, so superior was Grammar’s rowing, that it was in front and already appeared a certainty. The coach, Mr. W. Ricketss, did not worry the lads with needless instructions. He just asked for more leg drive, and the response was magnificent. The boat drew further ahead with the lads sitting her with strength and confidence. Geelong crabbed and missed a stroke. Entering the straight, Hoffert, the Grammar stroke, maintained a perfect length that was easily followed by his crew, and quickening a little, the boat forged ahead, to score an easy and impressive victory by 2 and a ¼ lengths in 4 min 49 sec.

This year was to be the last time Charles Donald would coach the Wesley crew. 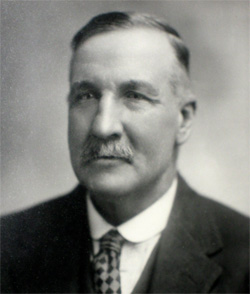 Charles Donald was appointed coach of Wesley when the change was made from fours to eights in 1901. He was a leading Victorian oarsman at that time with Albert Park Rowing Club. He began at Wesley with a sequence of six wins, and for 40 consecutive years coached the Wesley crew. He gained the title as the "Prince of Coaches". He was known by all as "Charlie" and held in the deepest of regard by all who rowed under him for his lessons in the art of rowing and the lessons in life that he passed onto his rowers.

After an awkward start having to negotiate a ferry on south station, the crews got away not exactly on their desiganted stations. SC got away well and were never headed. MGS stuck deperately with SC and showed that they too were a good crew.

GC and SC second crews met again in a private race, this time on the Barwon. SC won the event this year.

Despite a bad start due to not being ready, the SC quickly gained the lead and never lost it. The XC crew led for the first part of the race with a very high rating. Unfortunately they were unable to maintain that pace and eventually finished third. Wesley were rowing well and were able to eventually pass a tiring XC crew but could not make an impression on the SC crew.

An interesting race with SC looking very good out of the start but were then rocked by a bad crab which allowed WC to take a length lead and leave SC last. The SC crew fought back very well clawing back the other crews to win by 5 feet in a superb display of rowing.

(This race was conducted as part of the Junior Eights regatta amongst Melbourne metropolitan schools on April 20 on the Upper Yarra. It was not part of the Head of the River regatta.) 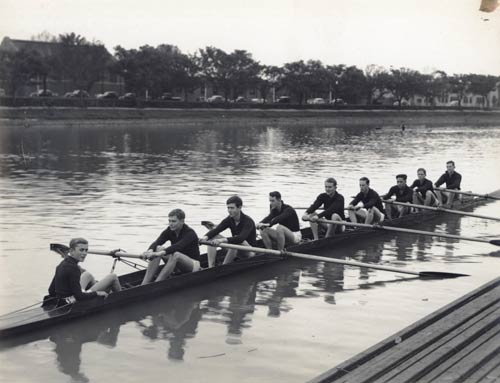 Unfortunately this was not a competitive race. One commentator stated: This was not a boat race - it was a procession.

(This race was conducted as part of the Junior Eights regatta amongst Melbourne metropolitan schools on April 20 on the Upper Yarra. It was not part of the Head of the River regatta.) 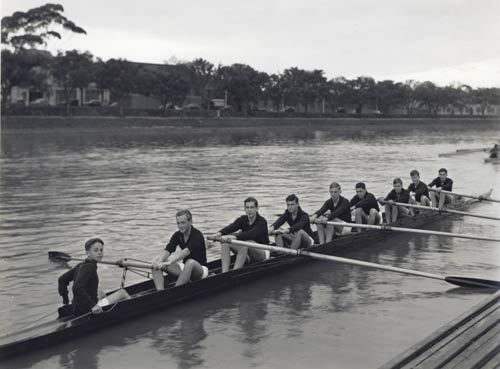 This was a close race with only a canvas between the top three crews and only half a length across the field. The lead changed many times and the better sprint in the end by the SC seventh crew was the deciding factor.