The thirtieth Head of the River was held on Albert Park Lake on 21st May 1897 which enabled a first & final. The use of Albert Park Lake was not a first choice. Melbourne Grammar who had the choice had both the Upper and Lower Yarra courses refused by authorities.

The start was uneven and Geelong led early from Scotch. Melbourne then made their run and took a length lead. Geelong fought back in the last part of the race but their run was too late and a one half length margin resulted.

This was the last year of string test gig fours with fixed seats. In the following year, outrigger fours with sliding seats were introduced in 1898. 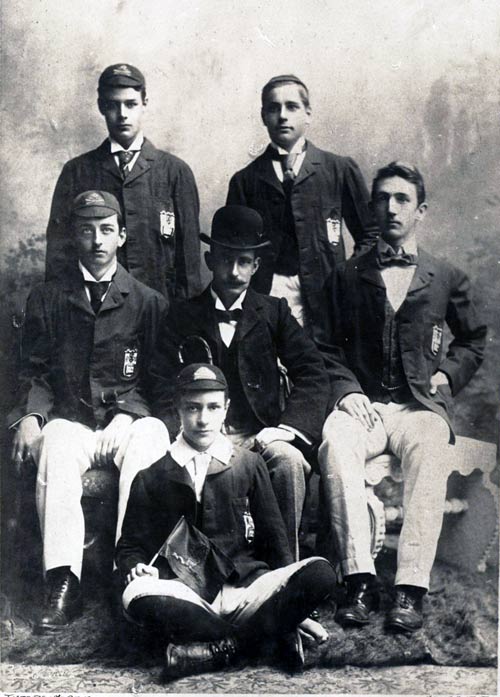 The stations were: Eastern - MGS, WC next, then GGS and on the outside SC. The course favoured the eastern station. The start was uneven with WC getting the benfit of the start. By the half mile, GGS had gained a lead of a length from Scotch and then MGS. MGS then made their move gaining a lead of a length. GGS fought back but their efforts were too late and the MGS won by 1/2 length. Scotch lost a lot from poor steering and were 3 lengths further back with WC still further in the rear.

The Argus reported as follows:

The boats got away well together, but the Geelong boys, rowing with a smart, hard stroke, were soon in front. The Scotch College stuck well to them, but it was some time before the MGS and Wesley could get underway properly. Coming over to the east shore Geelong were a length ahead of Scotch College, with Melbourne half a length further astern, and Wesley farther back. The cheering and inciting were intense, and they became perfectly deafening when it was seen the MGS had caught Scotch and were overhauling the victorious Geelong. When the boats left the east bank again Melbourne were leading, and had gained a length by the time they ran under Pagoda Island. It was Geelong’s last chance, and they made a gallant spurt, in which they gained foot by foot, but it was too late. Mr. Harold Irving, the judge, declared that Melbourne won by half a length. Scotch were a couple of lengths astern, and Wesley still further in the rear.

(This was not raced at the Head of the River regatta but on the Barwon on 8th October 1897.)

The Geelong Advertiser reported this race as follows:

The second crews of the public schools of Geelong and Melbourne competed on the Barwon river yesterday afternoon.

A capital start was effected, the three crews catching the water together, but after the first four strokes the Geelong boys rapidly shot ahead and passed the end of Pakington-street a length and a half ahead of MGS, who were splendidly held by Wesley. From that point the Geelong crew, without apparently much exertion, steadily increased their lead, and passed the winning post 5 lengths ahead of MGS, whilst the Wesley crew were more than 12 lengths astern at the finish. The time over the mile was 5 min 53 sec.