By rotation, the sixty-sixth Head of the River was run on the Barwon course on 11th and 12th May.

Scotch has a row over in the heat over because Geelong College withdrew due to diphtheria in the crew.

The final was conducted at 2pm with SC on the north station, WC centre and GGS on the south. There was a delay at the start due to a rigger repair on the WC boat. The race eventually got away excellently with Geelong rating the highest of the three crews and Wesley soon gaining a quarter of a length over the other two crews. Wesley increased their lead to half a length by Pakington Street with Geelong second and Scoth last. The lead of Wesley grew to a length by the Mills. However Geelong increased their rate and took after Wesley. Wesley managed to hold on by half a length to Geelong with Scotch a further length back.

Scotch had the north station, Wesley the centre, and Geelong Grammar the South. The water was quite calm with just a light head breeze, which made the time slower. Wesley went off at 40, Geelong striking 42 and Scotch 38. Wesley immediately took the lead and were soon a ¼ of a length in front with the other two crews on level terms. At the end of a minute’s rowing Wesley still had their ¼ length lead rowing at 36, whilst Geelong Grammar had dropped to 38 and Scotch 36, these two crews still being level. Wesley were now rowing like a machine and moved further ahead, having a half length at Pakington-street, whilst Geelong Grammar had gone ahead of Scotch, the three crews maintaining their precocious rates of striking. Coming to the mills Wesley increased the lead to a length, with Scotch half a length behind Geelong Grammar. Reaching the mills Wesley had put daylight between the boats, and were still striking at 36, to Geelong’s 38 and Scotch 34. After passing the mills Geelong made an effort, and increased their rate. They gradually drew up on the leaders, but Wesley were able to maintain a lead and never showing any signs of being hustled, passed the line with a length to spare. Scotch were third behind Wesley by a length. Time: 5 min 42 4-5th sec. 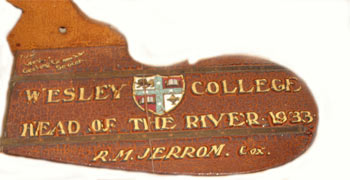 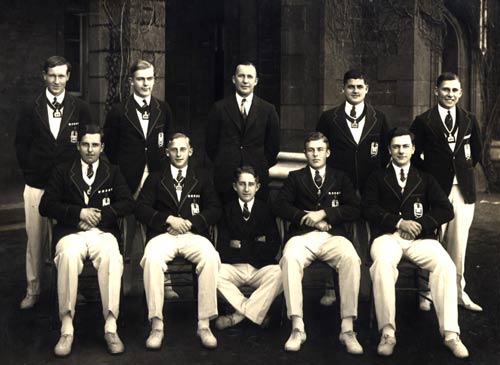 Heats
E1: 1st WC, 2nd MGS, Margin: 1 1/4 length, Time: 5:37.
Whilst Grammar got the best of the start, Wesley came back mid way through the race to take the lead. MGS suffered from steering issues and also the ability to claw back the Wesley crew whose boat was running beautifully. WC extended their lead of the final stages.
E2:  1st SC, 2nd GC. Time 6:16.0, Margin: row over.
This was a row over given that GC withdrew after illness to several memners of their crew. This was obviously devasting for them. SC unsuccesfully tried to gain entry to another heat without success. SC paddled over the course hence their time of 6:16.
E3: 1st GGS, 2nd XC, Margin: 2 lengths, Time: 5:31.2
An all the way win to GGS.

In the first heat Wesley had the north and MGS had the centre station. Both crews struck 40 at the start. In the first few strokes MGS forced the nose of their boat in front, and gradually worked ahead until they had an advantage of a canvas at the end of the first minute’s rowing, when both crews now dropped to 38. MGS now dropped to 34, and further increased their lead to a ¼ of a length at Pakington-street. Wesley were still retaining a bright 36, and commenced to move up on the leaders. Their clean blade work was having effect and the work of the Grammar boys was becoming a little disorganized. Wesley were drawing up, and it was now seen that the MGS were feeling the strain and losing their combination. Half-way between Pakington-street and the mills Wesley had wiped out their deficit and drawn a few feet in front. At the mills Wesley had the race in hand, rowing 36 to Grammar’s 33, and the latter were a length to the bad. Grammar failed to recover in the run from the mills to the finish, and Wesley increased the lead to a length and a quarter. Time, 5 min 37 sec.

In the third heat Xavier had the north and Geelong Grammar the centre station. Geelong Grammar went off at the very high rate of 41, Xavier striking 38. The light blues immediately went to the front. At the end of a minute’s rowing their rate had dropped to 38, and they were a ¼ of a length to the good. Slowly the leaders increased their advantage, continuing their high rate of striking, and they were a length ahead at Pakington-street, with great use being made of the legs. Shortly after passing Pakington-street, Grammar went further ahead, and were still rowing at 38, and their advantage was now a length and a half. Xavier seemed to be able to make no impression, and were rowing at 33. Coming to the mills Xavier raised the rate to 36, but failed to reduce the gap. At the mills the Geelong boys were a length and ¾ ahead, rowing at 36, whilst Xavier had dropped the rating to 34. Geelong maintained their rate of 36 to the finish, and increased their lead to two lengths. Time: 5 min 31 1-5th sec.

The crews lined up with Scotch on the north station, Wesley on north centre, south centre was Melbourne Grammar and Xavier was on the south station. The start was difficult with a slight north wind blowing both Scotch and Wesley off their line. Regardless of the line, the race was commenced with Scotch in particular suffering. By the staging, Melbourne Grammar and Wesley were fighting out for first place whilst Scotch and Xavier were having their own race a length and a half behind the leaders.

The final result was tight between Melbourne and Wesley with the other crews well behind.

The Age reported as follows:

Wesley took the lead soon after the start, closely followed by MGS, Xavier close up, and Scotch, who had obtained a bad start, was nearly a length behind. In a hard struggle down the side of the staging Wesley and Grammar were fighting for the lead, and in a very interesting finish Grammar won by just 2 feet. Xavier was two lengths away third, being half a length in front of Scotch. Time: 2 min 41 sec. 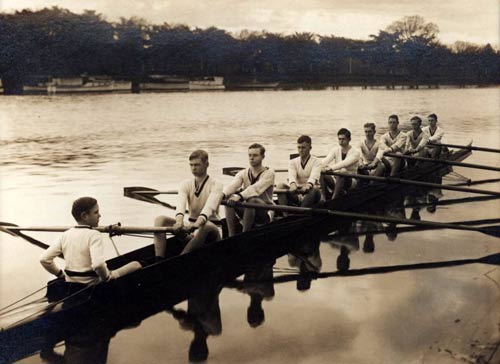 The crews started as follows:

Scotch had the better of the start and led in the early stages. However the good form of both Melbourne and Wesley soon saw the Scotch crew overtaken.

MGS took the lead in the first 100 yards, and at the commencement of the Henley staging was half a length in front, Wesley, with Scotch handy, closely followed by Xavier. Wesley made a determined effort down the side of the staging, but the dark blue crew was too strong, and won a good race by half a length from Wesley, which was a length in front of Scotch, with Xavier half a length away. Time: 2 min 50 1-5th sec.

Finish of the Third Eights

In the first start, Melbourne broke an oar and a restart was required. The crews started as they finished with a fine win to Wesley.

On the second start, Wesley immediately took the lead, and was nearly half a length ahead at the Henley wall, when MGS challenged, but Wesley, rowing in good form, was able to hold its lead, and passed the winning post a half length in front of Grammar, with Scotch a length further behind. Time: 1 min 26sec.