The fifty-first Head of the River was conducted on the Upper Yarra and was conducted on 11th May with the heats on the day before. Melbourne Grammar won well from Wesley and Geelong Grammar but did not have all their own way in the final as the picture below shows.

Cecil McKay, who raced in the first crew last year, stroked the crew this year. McKay was to stroke the crew again in 1919 and become a noted Victorian oarsman. Alex Sloan returned to coaching the Scotch crew this year after a long absence.

The reporting of the final comes from The Age.

When the crews rowed up to the start, there was a fair breeze blowing across the course, and though having practically no effect on the water it would catch the crews. Wesley, on the south station, would feel the force of the wind more than the other crews, and Melbourne Grammar on the north had the favored position. As anticipated in the notes on Friday’s racing, published in “The Age” Melbourne Grammar finished first, with Wesley second. Geelong Grammar were unfortunate, as No. 3 crabbed a little more than halfway over the course. Had it not been for this they may have finished second. It must be remembered, however, that Wesley lost considerably in rounding the big bend, as their coxswain took them out too far wide. Welsey’s loss by bad steering probably counteracted Geelong’s loss by the crab, and on the rowing Wesley merited second place. The winners were a fine crew, and undoubtedly superior to any other crews in the race. They made much more use of their weight than their opponents. In the final they were not pushed hard as they were by Scotch in the heat, and they were less exhausted at the finish. The time, 5 min 13 sec, was very good under the conditions. Melbourne Grammar’s time in the heat was taken at 5 min 16 sec, but as the crew was a length past the post when the pistol fired, owing to a misfire at the first attempt, and their time would probably have been 5 min 13 sec for the heat.

The three crews went off to a beautiful start, the rowing being very clean. Melbourne got away at 40 and Geelong and Wesley at 38. After covering about 100 yards Wesley were a few feet ahead, and at the bend approaching the bridge Wesley had a canvas on Geelong who were slightly ahead of Melbourne. Just after passing the bridge, Wesley had increased their lead over Geelong to half a length, Melbourne Grammar being a few further feet away. Approaching the big bend Wesley were nearly half a length in the lead while Melbourne had overhauled Geelong and had a canvas on them at the bend. Going round the bend the Wesley boy kept out too far and Melbourne, on the inside running, quickly drew on the leaders. When the crews had straightened up after getting round the bend Melbourne and Wesley were level, with Geelong half a length away. Melbourne now settled down to a solidly rowed 36 and drew away from Wesley by ¾ of a length, with Geelong a canvas behind. No. 3 in the Geelong Boat crabbed before reaching Brander’s and before the crew got going again Melbourne had a lead of nearly a length and a half on Wesley, the latter being a similar distance ahead of Geelong. Melbourne were not troubled on the run to the finish, and rowed with a fine swing and drive. When Geelong got going after the crab they had made a great effort, and got within a few feet of Wesley. Near the end of the Henley staging, Wesley sprinted and got further ahead of the Geelong boys. Melbourne Grammar reached the finish amidst great excitement two lengths and a half ahead of Wesley, who were half a length ahead of Geelong Grammar. Time 5 mins 13 sec.

The reporting of the heats comes fromm The Age.

Geelong Grammar had the north station, and Geelong College the centre. Grammar started at 39 and College at 38 strokes to the minute, and at the Botanical Bridge the College were leading by a few feet. Passing under the bridge the College crew faltered, and Grammar got in front, settling down to a solid 36 to the minute. Half way to the new cut corner Grammar were leading by a canvas. When the boats straightened up after rounding the bend Grammar were half a length ahead, rowing 38 to College’s 32. At Brander’s Grammar led by ¾ of a length. Coming along the Henley staging Grammar quickened to 37 and College to 36, and College gained slightly, both crews raising the rate to 38. A great struggle ensued to the finish, Grammar winning by ¾ of a length. Time 5 min 28 sec.

Xavier had the north and Wesley the centre station. The latter crew got away with a beautiful start at 39, whilst Xavier were rowing 40. After covering a few hundred yards Wesley had nearly ¾ of a length lead, and passing under the bridge there was daylight between the boats. Wesley then settled down to a well-rounded 35 strokes to a minute, whilst Xavier maintained the high rate of 38, occasionally reaching 40 in their sprints. Wesley were rowing very well, and were able to maintain the lead at 35, though Xavier were gradually getting up at the higher rate of striking. Wesley reached the finish a bare length ahead of Xavier, whose rowing was too short, though very plucky. Time 5 min 22 sec.

Melbourne Grammar had the north, and Scotch College the centre station. The latter started at a high rate of 42, Grammar striking 40. The bow oars in the Scotch boat did not take the water cleanly on the first stroke, and Grammar got away with a lead. Scotch, however, soon got going, and led by a canvas at the bridge, both rowing 38. Grammar maintained a fine swing, and a great struggle ensued to the bend, where both crews were level. In going round the bend Grammar gained a few feet, rowing at 36 to Scotch’s 37. Nearing Brander’s Grammar led by a canvas, and at the staging they began to draw away at a solidly rowed 36, despite a good effort by Scotch. Towards the finish Grammar were able to hold their lead and won by a bare length, both crews being rowed right out. This was the fastest heat being 5 min 16 sec.

Geelong Grammar during their heat win 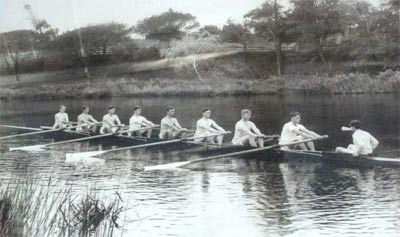 (Not conducted at the Head of the River regatta. It was run on 4th May on the Upper Yarra course.)