The second Head of the River race was conducted on the Upper Yarra on 18th June 1869.

The Grammar crew had trained for a longer period than the College crew but the College crew were heavier. The race was open for both crews to win but a strong finish by Scotch with some final strong strokes got them across the line. There is a dispute as to whether the margin was 2 feet or 5-6 feet. Either way the race was tight.

A press report syas: It was utterly impossible to say which crew would win till within a few yards of the winning post, when the College lads, with a few powerful strokes, succeeded in winning by four or five feet, The boats were not clear of one another from start to finish.

The winning Scotch coach of the previous year, was this year joined by John Phillips as co-coach.

The time of 8:30 shows that the equipment used, being string-test gigs with fixed seats, were no match for current equipment. Also the average weight of the MGS crew was only 9st 8.5lbs so the rowers of today would be considerably larger.

The lithograph on the right provides an impression of river life at that time. 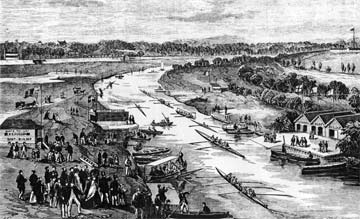 The lithograph shows the river on Easter Monday in 1865 with Edwards Boatshed on the right.

The Age reported on the race in the following terms:

From the start to the close the race was very keenly contested, neither boat being at any one time more than a couple of feet in advance of the other, and the room for conjecture as to the winners therefore very limited. Almost at the last moment, however, the Scotch College crew managed to pull ahead of their competitors, and won by half a boat’s length. Time: 8 min 30 sec.

An article in the Melbourne Herald in 1950 records that William Oliver of the Scotch crew was born in 1853 in Sale. He was still alive in 1950 and was the oldest living Scotch Collegian at that time and the holder of the No 1 medallion of the Melbourne Cricket Club and also the Victorian Racing Club.