Wesley again returned to the winning dias in the forty-eighth Head of the River with a good win over Scotch and Geelong Grammar on the Upper Yarra course on 8th and 9th May.

This was the last year Lt Col A F Garrard coached the Geelong Grammar crew after coaching the crew since 1897. 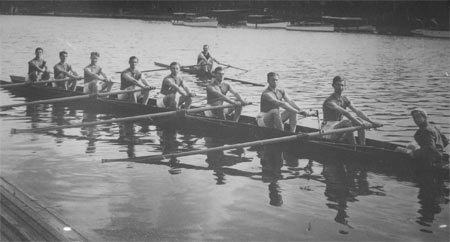 Note that coach Charles Donald is in the scull

Well on to time, the starter, Mr. T. Davis, got the three crews away to an even start without any trouble. Wesley, rowing at a fast rate, immediately forced ahead, Scotch and Geelong Grammar not doing as well as in the heats, the latter crew not being by any means together.

On the stretch to the Bridge, Wesley kept further over to the north side than was necessary there by giving the Geelong Boys an awkward task in negotiating the bridge. After passing the bridge Wesley had half a length's advantage on Scotch, with Geelong in the third position. Coming round the comer, Scotch appeared to be too close in to the south bank, but had Wesley kept their true course it would have been seen that Scotch were simply allowing both the inside crews ample space to negotiate the turn. Unfortunately, Wesley were not so considerate for the Geelong boys, who were forced right against the north bank, where the water is notoriously, dead and shallow. In addition to this disadvantage, Wesley, who had just about a length advantage on Geelong, and half a length on Scotch, Kept so close to the visiting crew that the latter's stroke side blades were dipping in the wash of the bow side’s blades of the leading boat. Had the Geelong coxswain not given way, or, after giving way, had he made up his mind to again take his true course, a foul was inevitable, which would have meant the disqualification of the leading crew, who were not on their true course.

After entering the straight the three crews raced on in the same position. Wesley, rowing the best form being able to maintain their lead. Passing along the Henley wall, Scotch and Grammar both made great efforts, and reduced Wesley’s lead. Wesley, however, were capable of retaining a fair advantage, and crossed the line half a length ahead of Scotch, who were a similar distance ahead of Geelong Grammar. The work in the Wesley boat was an improvement on their showing on the previous day, the length and recovery being good, whilst the finish of the stroke was particularly hard and clean, as compared with the other crews, neither of which rowed up to the standard of their heat. Scotch made great efforts to gain the lead, but the recovery was rushed, and the forward swing too short. Geelong lost their form completely in their effort to overhaul the leaders towards the finish, and some of the men mere swinging out of the boat.

The winners were undoubtedly the best rowing crew of the day.

Xavier was racing well in their heat but one of their crew caught a crab and fell a length behind. They fought back to lose by only 1/3 length.

The Age reported on the heats quite extensively.

Shortly after half past 3 Scotch College and Xavier College lined up at the start, and, owing to the ideal state of the water, the starter had no difficulty in getting them off. Both crews went away at about 38 strokes to the minute. Scotch College, whose blade work was the cleaner, quickly going ahead. At the botanical bridge Scotch had an advantage of nearly half a length. Xavier then closed up, and reduced the lead to a quarter of a length. Scotch then sprinted brilliantly, and increased their lead, but Xavier were keeping in a handy position when stroke 'crabbed,' thus relieving the situation for Scotch. Xavier again made a determined effort, and got up to within a quarter of a length of the bow of their rival boat, but the latter were able to respond, and drew away slightly, winning a desperate race by nearly half a length. Scotch had a good leg drive, and. their blades were taken through hard and clean. Xavier also rowed a vigorous stroke, but the pause immediately before the catch was detrimental to their rowing.
Time: 5 mins 25 secs

Second Heat
(Wesley College v Geelong College)
In the second heat Wesley College met Geelong College. The former went off at 40 strokes to the minute, but their blade work was very dirty on the recovery, and there was far too much splashing. However, they quickly took the lead, and had an advantage of half a length at the bridge. Geelong were rather short, and the recovery was too unsteady, but they were rowing a plucky race. Passing under the bridge, Wesley steadied down to 35 strokes to the minute, and had increased their lead to a length and a half entering the straight. The Geelong crew then made an effort and drew up on the leaders, but were unable to keep their position. Nearing the finish Wesley quickened a little, and increased their lead to a length and a half as they crossed the line. The Geelong crew used the Barwon Rowing Club's boat, which is capable of carrying a 12-stone crew, and they would have had a better chance of showing pace had they been in a boat specially built for a school crew, seeing that they only averaged 10 st 3lb. A light crew is never seen to its best advantage in a big boat
Time: 5 mins 30 secs

Third Heat
(Melbourne Grammar v Geelong Grammar)
After the pistol had misfired twice the starter got Melbourne Grammar and Geelong Grammar off to a good start. Geelong went away at a very fast pace, rowing 11 strokes in the first 15 seconds and 42 strokes, for the full minute a , really good performance, as the blade work was so clean and uniform. The metropolitan crew started at 39, and by the time they reached the bridge had dropped half a length behind. At the new cut comer the Geelong Boys were rowing at 37, the bodies being well together and the weight uniformly applied throughout the stroke. On entering the straight Geelong College. had almost a length to their advantage. Melbourne Grammar had now steadied down, and were getting fair pace. Shortly after this they made an effort, but the last piece of the recovery was rushed, whilst stroke was getting in before reaching out the full length, so that the Geelong boys were able to retain, their lead, though their blade work was not quite so clean as at the start. Rowing at a rate varying from 37 to 35, the Geelong Grammar increased their lead to a length and a half by the time they reached the finish.
Time: 5 mins 35 secs 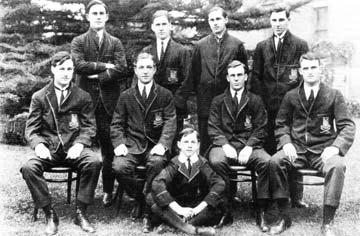