The twenty-first Head of the River was conducted back on the Upper Yarra on 18th and 19th May. Wesley, for reasons unknown, did not compete.

Geelong Grammar won both races by 6 lengths and the competition was poor. The Geelong crew was as strong as the opposition weak. The margins were probably much more than Mr Carlile officially prescribed.

Geelong raced the first inter colonial schools race against St Ignatius of Sydney on the Barwon.

The final was reported by The Argus:

The Scotch College boys were big and strong-looking and rowed fairly well, but the Geelong were more thickly set, exhibited better form, and as the sequel proved, were much faster, the race resulting in a very easy victory for the Geelong, who jumped away from the start, and gained a length in the first reach, which they increased to two before Brander’s Ferry, four at the baths corner, and six at the winning post.

The heat was reported by The Age as follows:

The advantage in stations enabled the MGS boys to gain a short lead, but they were unable to maintain it for more than a couple of hundred yards. The Geelong boys, rowing a clean and more powerful stroke than their opponents, got level at the first turn, and very quickly forged ahead. At Brander’s ferry they had secured a lead of nearly two lengths, and the race was the practically over. Having the inside position at the baths corner, the Geelong boys increased their lead to five lengths, and rowing well within themselves, they passed the judge as winners by this distance. 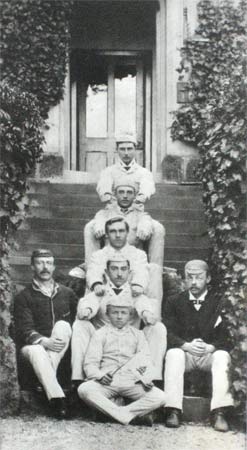 (This race was not conducted as part of the Head of the River regatta but on 4th and 5th October on Albert Park Lake.)

The Argus reported the heats as follows:

The Scotch College had the western station, and were conceded half a length start in consequences. Mr. J. Irvine got the crews away on very even terms. The Scotch College, in spite of rowing a very fast stroke, could not get away from the Geelong, who maintained their pace by a long, slow, forward stroke after the initial spurt of their opponents subsided. At Obstruction Island the Geelong crew had a length’s lead, and the turn enabled them to double it. The Scotch boys lost a lot of ground there through want of judgement on the part of the coxswain. Approaching Pagoda Island the Geelong crew, still rowing as they had started, had three length’s lead, and by the time they passed the post had increased it to six lengths.

The Wesley College had the inside or eastern position. Mr J. Cuthbertson gave the word and both crews struck water simultaneously, but the MGS cox had not got complete control over his boat, which ran into the wind. A good race took place up to the corner of Obstruction Island, but the Grammar crew, rowing almost the same stroke as Geelong had succeeded with, there gained a length and a half lead, which they steadily increased until they finished four lengths ahead.

The Age reported on the final:

The crews got away together, and rowed stroke for stroke to Obstruction Island, where the Geelong boys drew slightly ahead. The Melbourne spirted and drew level and another tussle ensued for a lead. The crews rowed level and were within 200 yards of the post when the stroke of the MGS crew, who were slightly ahead, made a faulty stroke, and the Geelong crew gained a ¼ of a length, which they kept to the finish.