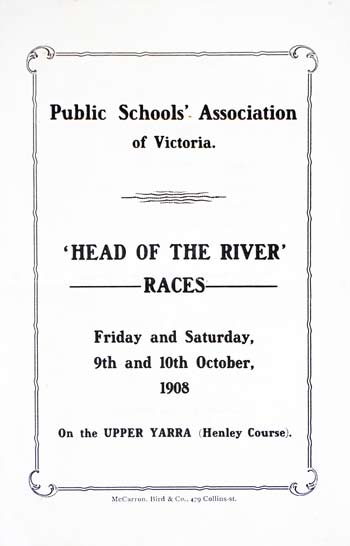 The forty-first Head of the River was conducted on the Upper Yarra on the new Henley course. The new course enabled a final containing three crews.

The very succesful Henley on the Yarra Regatta enabled many other river improvements to be made to the area of the Henley staging and Henley lawns. This followed the significant changes to the course of the river made last in the last century.

Geelong College joined the Head of the River in fine style finishing second behind Scotch College.

The six schools now enabled three heats of two crews and a three crew final. This system continued until 1961 except for the war years of 1942 and 1943.

A losers final was introduced in 1943. 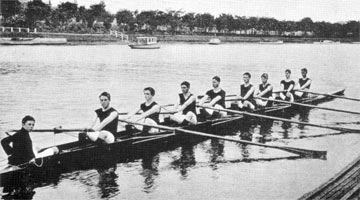 Photo reproduced from "Lift her home to victory, lads, a centerary history of Xavier College Rowing" by Michael Lefebvre 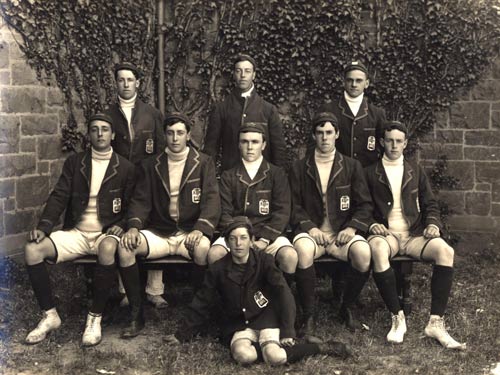 The heats brought out some very interesting results. Melbourne Grammar met a maligned Xavier crew in the heat. Xavier had a fast start and maintained a lead into the final stages of the race. Melbourne Grammar were beginning to overhaul the Xavierians, when the Grammar cox steered off course, causing a clash with Xavier and for Xavier to stop rowing. Melbourne Grammar won by a canvas. A protest by Xavier was upheld and Xavier raced in their first final.

The second heat was a splendid race for thre quarters of the distance, after which the Geelong College crew forged ahead and won by a bit over a length.

The third heat saw Scotch College row with much greater power and steadiness than their rivals and won by over 2 lengths.