Summary of APS Head of the River for the Fairbairn Cup

The first cup for competition was presented in 1875 by the Hon. T J Sumner, to become the property of the school which should first win it three times. Scotch College won it in 1875, 1876 and 1879 and have retained it since that date.

In 1911 Mr Charles Fairbairn presented the Challenge Cup and the winners of this handsome trophy and previous "Winners of the Race", as it was known then, are listed below This was not before many years of discussion amongst the schools about Mr Fairbairn's kind offer. The schools delegates had accepted the offer in 1880, but unfortunately the schools did not ratify this decision at that time.

In 1880, after the Sumner Challenge Cup had been won in perpetuity by Scotch College in 1879, Mr Fairbairn came forward with the offer another. The offer was accepted by MGS and GGS, but not SC and WC. Later that year at a meeting of school delegates, the offer was accepted and the Hon Secretary conveyed this message to Mr Fairbairn. However they had not ascertained whther the school authorities would also agree. The Headmasters refusewd to ratify the decision. Meanwhile, Mr Fairbairn purchased the Cup. The decision caused a great deal of unpleasantness at the time and much sympathy for Mr Fairbairn was felt. for this awkward position. It was not until 1911 that the trophy became the Perpetual Trophy for the boys Head of the River.

Until 2001, the race was rowed over a distance of about a mile. From 1938, the Upper Yarra course was reduced to 1 mile less 66 yards, and the Barwon course was also shortened to this distance from 1948. From 2001 onwards, the race was conducted over 2000 metres.

In 1942 due to war restrictions, only two crews raced at a time. In 1943 wartime travel restrictions forced the event to be conducted both in Melbourne for the Melbourne crews and in Geelong for the Geelong crews.

Scotch College is the only school to have competed in every event. 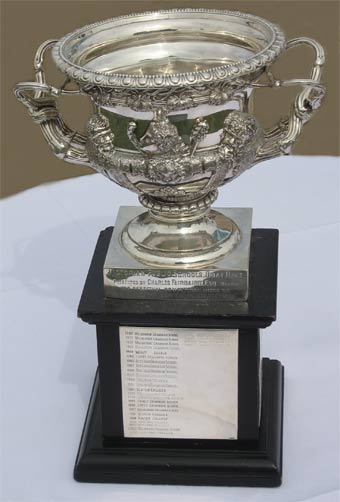 Summary of Results of the Boys' Head of the River

The results from 1977 to date have been largely drawn from the work of Robert Wakefield and his contribution is gratefully acknowledged.

A key to the abbreviations used for each school can be found below.

Index to APS Head of the River

Summary Girls' Head of the River