The course used for the sixty-eighth Head of the River was the Upper Yarra course. The heats were conducted on Thursday 16th May and the finals on Friday 17th May 1935.

Many schools were adversely impacted by the floods of December 1934 with many boats and boat sheds lost. SC for example lost it's boat shed at the school and replaced it with a reinforced concrete shed which is still in use today and showing no signs of deterioration.

Of note with the Junior Eights Regatta, sixth crews were introduced after the successful introduction of fifth crews in 1934.

New Xavier coach Marcus Bourke was generous both in his work for Xavier and also the wider rowing community. An example of this was his hosting of 1932 King's Cup picnic at his property "Doongara" at Ferny Creek.

The new Scotch coach Arch Dobbie was also heavily involved in the wider rowing community. He was President of his club Mercantile from 1933 to 1955 and also President of the Victorian Rowing Association from 1953 until his death in 1955. 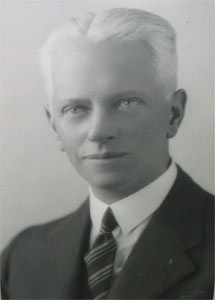 All three crews adopted the Fairbairn style of racing. GGS had a fast start and outrated the other crews materially, taking a 2/3 length lead at the Bridge. As the crews swung around the bend, they drew closer together amking a good race. Down the straight all crews raced strongly but GGS moved away gradually to win 2/3 length from MGS with SC a further length back.

The Age reported the final in the following terms:

Scotch had the north station, Melbourne Grammar the centre and Geelong Grammar the south. Mr. Green effected another fine start without any trouble, and the three crews dashed off together. MGS and Scotch rated at 42 for ten strokes after the first three, and Geelong Grammar were two strokes slower, but were first to show in front. After covering a little over a hundred yards Geelong were nearly a ¼ of a length in front of MGS, whilst Scotch were another ¼ of a length behind. The Geelong boys kept increasing its lead on the run to the bridge, whilst Scotch could not hold MGS at this stage. Geelong reached the bridge in 59 seconds and were slightly over a length ahead, rowing beautifully. Scotch were ¾ of a length behind MGS at this point. Opposite the drain at the corner Geelong were rowing a well-timed 33, and were a length and a half in front whilst MGS, rowing at 36, were nearly a length on Scotch. Coming to the half mile, MGS were inclined to be ragged, and Scotch, with the inside running, began to make up some of the leeway. After entering the straight the Grammar boys were laboring, and Geelong were holding their lead. Scotch at this stage were rather irregular in the blade work, and were a length behind MGS. The dark blues never relaxed their determined efforts, despite the irregularity of the blades and bodywork, and at ¾ of a mile mark had decreased the lead. It looked possible that Melbourne might come further up as Geelong seemed to rowing every ounce. The more even work of the Geelong boys, however, proved effective, and they were able to hold off the dark blues, despite their desperate attempts to draw level. In the last stages of the race Geelong Grammar raised the rate to 35 in response to the challenges of MGS and Scotch, both of whom were striking at 37 in their final efforts for victory. The Geelong crew retained its lead to the finish, and gained a well earned victory from the south station, which was the least favored. Won by 2/3 of a length with a length and three feet between second and third in 5 min 35 sec. 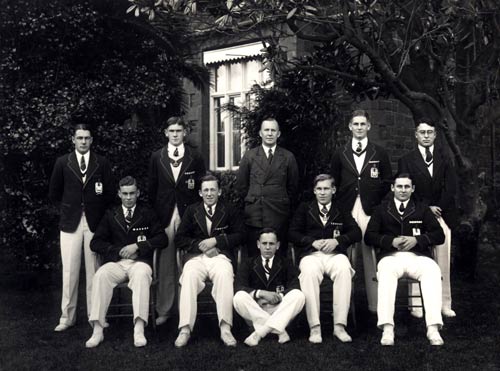 Photo reproduced from The Scotch Collegian

Heats
E1: 1st MGS, 2nd WC, Time: 5:09.6. Margin: 1 length.
A contract of rowing bstyles with WC rowing the style which had made Charlie Donald famous for over 30 years and MGS adopting the Fairbairn style. Despite wapping the lead at various stages of the race, MGS had a 1/4 length lead when WC crabbed and MGS increased their lead to one length. Despite the lead widening to 2 1/2 lengths, WC rowed back to finish 1 length behind.
E2: 1st SC, 2nd XC, Time: 5:30.2, Margin 1/4 length.
As the margin indicates, this was the race of the day. SC lead early and maintained the lead throughout despite some tough tussles. Around the big bend XC picked up on SC having the advantage of that bend. As they entered the staright, a great race commenced. Both sprinted together without any change in margins. Then XC slowly crept up on SCgetting within 2 feet before SC moved away to win by 1/4 length.
E3: 1st GGS, 2nd GC. Time: 5:26.8, Margin: 5 lengths.
An easy win to GGS from start to finish.

Wesley and MGS paddled up to the start for the first heat in plenty of time, and the race started punctually. There was no delay in starting and Mr. H. J. Green sent the crews away to a perfect start. Grammar on the centre station started at the higher rate, and soon began to draw away. Half-way to the bridge the dark blues appeared to be nearly half a length ahead. The leaders reached the Morell-bridge in 40 strokes, the time being 59 seconds, whilst Wesley took two strokes less for the distance, rowing throughout at a slower rate than Grammar. Grammar was still drawing ahead, and had an advantage of nearly 2 lengths. Wesley now began to move up, but just before the half mile was reached they crabbed badly, and had to stop rowing. They lost two lengths, but gamely set after the leaders again. Wesley were quickly into their swing, and rowing more effectively than in the earlier stages they began to close up the gap slowly. In the straight there was less than a length of daylight between the two crews, and before covering ¾ of the course Wesley were within a ¼ of a length of Grammar. They made a further gallant effort, and drew closer, but Grammar took no chances and responded well. MGS won with a length to spare. Time: 5 min 9 3-5th sec.

In the second heat Xavier had the north station and Scotch the centre. The crews were again sent away to a good start, and, rowing about three strokes a minute faster than Xavier, the Scotch crew soon had the nose of its boat in front. After covering 200 yards Scotch were nearly half a length to the good, and had added nearly a ¼ of a length more to their advantage by the time they reached the bridge, their time being 1 min 4 sec. Both crews were rowing well, and the bodywork was uniform with good leg drive. Xavier were now rowing very effectively and holding the leaders at a slightly slower rate of stroke. After passing the half mile mark the crews struck the full force of the wind, and Xavier began a splendid effort, which quickly reduced the lead of Scotch. Scotch responded, and, amidst the din of shouting from the 50,000 throats, won of the most thrilling contests seen in a Head of the River race by the narrow margin of a ¼ of a length. Time: 5 min 31 sec.

Geelong Grammar and Geelong College were drawn in the third heat, the former having the north station.

The crews got away to a good, and the College boys were rowing the slower rate. Quickly the light blues shot ahead as the result of the quick application of the legs and the bodies in a piece of splendidly-blended rowing. Half-way to the bridge saw Grammar half a length in front, and another half length had been added as the crew shot under the bridge in 62 seconds. Grammar now drew clear of the College, and were two lengths ahead at the big drain on the bend entering the straight. Grammar were now rowing a solid 33, and the even body work, without any rolling of the boat, was a feature of the rowing as the crew neared the finish, drawing further ahead at every stroke. The water was fairly rough in this heat, and the head wind was a big handicap to the Geelong College crew, who were nearly a stone lighter per boy than the Grammar crew. Grammar won by 5 lengths in 5 min 26 4-5th sec.

SC got away well but the pace was terrific and they could not make the lead meaningful. The race continued at the same fast rate and it was not until the pace began to tell that SC were able to draw away from MGS and take the race.

The report in The Age concurredt - Melbourne Grammar was the first to gain a lead, but was soon displaced by Scotch, which was half a length ahead at Brander’s, whilst four feet separated the other three crews. Scotch continued to increase its lead to win by a length. There was little difference between the other crews at the finish. Time 2 min 42 4-5 sec.

This was the most exciting race of the day. The three crews left evenly but WC started to forge ahead leaving the others on even terms. MGS then dropped back. Just as the race seemed to be over, SC sprinted and looked like they could win. For the last dozen strokes, SC kept getting closer with every stroke. Alas the judges gun went off with only 1 foot seperating the crews.

The report in The Age follows:

Wesley was the fastest away, and secured a canvas lead early in the race. This was increased to a ¼ of a length half way down the staging, when the other crews spirted and made up some of their leeway. Wesley retained its lead in a great finishing race to win by a narrow margin. Won by a foot, with four feet between second and third. Time 2 min 9 sec.

In difficult northerly winds, a start was eventually achieved. The crews kept together during the first stages of the race. WC then took to the lead but were challenged by the other crews. In the end WC won over SC by a canvas with MGS in last place.

The Age reported the race as follows: Wesley soon gained the lead, and at the Henley staging was ¾ of a length in the lead from Scotch. Wesley continued to draw away to win comfortably by a length, with a length and a ¼ between the second and third crews. Time: 1 min 59 sec.

The crews raced evenly during the early stages of the race. By the staging SC moved away and won in the end by a length.

The Age reported as follows: Scotch was half a length in front as the staging was reached, and gradually increased it to a length by the time the finishing time was reached. Time 1 min 53 sec.

An all the way win to SC. The Age noted: Scotch won by two lengths to MGS Sixths with MGS Sevenths a length and a half further back. Time: 1 min 48 sec.