The fifty-second Head of the River race is the one most spoken about in APS Head of the River history. There were many reasons for this. Not only was the result a dead heat and the two crews had to re-row the final later in the day, but also there was the euphoria of the Armistice which contributed to huge crowds attending to witness both the heats and final.

Details of the racing which took place on 23 and 24 May 1919 on the Upper Yarra are detailed below. 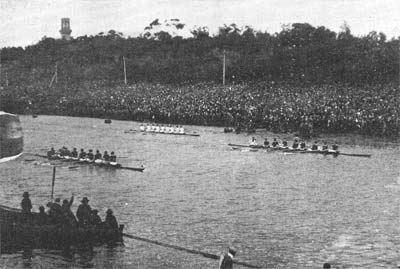 1919 Dead Heat between Xavier and Scotch

Photo from: Lift her home to victory, lads! A centenary history of Xavier College 1906-2006 by Michael Lefebvre

A crowd of 50,000 attended the Yarra River at 3pm on Saturday to witness the final. Geelong Grammar started well and led Scotch by a quarter of a length at Morell Bridge with Xavier third. Scotch and Xavier then overhauled Geelong with Scotch leading at the half mile by third a length.By half way down the Henley staging, Xavier had drawn level with Scotch. Both crews surged for the line in a frantic finish.

The result in those days was indicated by the raising of a flag of the winning crew. In the awkward time following the finish and the fact that two flags were raised, one obscuring the other, that the crowd was confused and supporters Xavier and Scotch both thought their crew had one.

After a long delay the announcment was made of a re-row at 5pm late day. Many supporters of the crews suggested that this was too much for the rowers. The coaches and rwowers had different views.

In the row off, Scotch had the better start and led by half a length at Morell Bridge. At the half mile, the crews were only a canvas apart and by Swan Street level. It was again a tight race with Scotch winning by a canvas is a time some 25 seconds slower.

When the Fairbairn Cup was presented to Cecil McKay, the Scotch stroke, his acceptance speech was simply Three cheers for Xavier College!

The Age reported as follows:

Final (Race 1)
Geelong and Scotch started off at 40, whilst Xavier struck 38, the Scotch start not being as good as in the heat against Wesley. Geelong got away best, and at the bridge they were slightly more than half a length in front of Scotch, and almost a length ahead of Xavier. The three crews now settled down to 36 strokes a minute, with Xavier gradually closing up on Scotch. At the corner Geelong kept out too wide, hugging the south bank of the river, and thereby losing nearly a length. Turning the corner Xavier crept up on Scotch, whilst Geelong dropped back. When the boats were straightened up for the last half a mile Scotch were nearly a length ahead of Xavier, with Geelong two lengths behind. On the run to Brander’s ferry Scotch maintained their lead over Xavier, whilst Geelong were gradually creeping up. Passing Brander’s the three crews quickened up to 38. Xavier were drawing closer to Scotch, whilst Geelong were reducing the gap between their boat and Xavier. Shortly after reaching the Henley staging, Xavier drew almost level with Scotch, but the latter again drew away. Both crews repeatedly sprinted to the finish, and at the end of the Henley staging Xavier appeared in front, but McKay made a great effort, and the two crews shot over the line together amid the greatest excitement, Geelong being a length behind. The latter crew rowed a plucky race, and had the most pace over the half mile, in which they picked up a length over the leading crews.
Time; 5 min 13 sec (deadheat)

Rerow
This race was started without moored boats, as they had been shifted after the first race. The start was perfect, both boats lay exactly on the line, not a boy in either boat stirring despite the great nervous strain, and as the pistol fired both crews shot off at 40, Scotch getting the better start quickly went away to the front, leading by a length at the bridge. Scotch then settled down to a well rowed 36, whilst Xavier, striking 38, began to draw up and were only half a length behind at the corner. A great struggle ensued going round the corner, and when the boats were straightened up Scotch were only a canvas in front. Both crews were now straining every muscle for the run home, and at Brander’s appeared to be level. The last few hundred yards were stubbornly contested, but the Scotch stroke, McKay, appeared to have slightly more in him than Acton, and he rushed his crew over the line a canvas in front of Xavier.
Time: 5 min 38 sec.

A crowd estimated to be 20,000 attended the Yarra River on Friday 23rd May 1919 to witness the heats. Xavier College raced a win all the way heat from Melbourne Grammar.

SECOND HEAT
SCOTCH COLLEGE v WESLEY COLLEGE
Won by a canvas. Scotch were exceptionally fast off the mark and got their boat racing on the first stroke, rowing 39 to 38. At the bridge, Scotch were half a length in front, and both crews settled down to a well rowed 36 stroke a minute. Coming round the corner, Wesley drew up on the leaders, and were only a canvas behind. Both crews then settled down to a grueling race down the straight, rowing stroke for stroke, and by the time they reached Brander’s. Wesley had drawn level. At this point, number 3 in the Scotch boat made a bad stroke nearly resulting in a crab. McKay and Tulloh both sprinted and six stroke after number 4 in Wesley almost missed the water and rolled the boat badly. Wesley raced on to the finish at 38, whilst Scotch got up to 39. Winning a great race by a canvas. Both crews maintained their sprint from the top of the Henley staging to the finish, and it was a great performance for boys, though there was a fair amount of splashing in the both crews towards the finish. Wesley’s performance was a meritorious one considering they had only one of last year’s crew in the boat. Time: 5 min 34 sec.

Third Heat
Xavier College v Melbourne Grammar
Won by ¾ of a length. Time 5 min 30 ½ sec. Grammar got off the mark at 40, whilst Xavier were striking 38. On the 10th stroke No. 4 in the grammar boat came off his seat, but quickly recovered. At the bridge Xavier were had an advantage of half a length, but coming round the corner Grammar had made good use of the inside running and appeared to get the nose of their boat just in front, both rowing at 35. By the time they reached Brander’s Xavier had again got nearly a length in front. On reaching the Henley staging both crews quickened up, Xavier striking at 39 and Grammar 40, but the latter went to pieces in the last effort. Xavier winning a hard race by ¾ of a length. Several members of both crews rowed right out at the finish.

(Not conducted at the Head of the River regatta)