The twentieth Head of the River was conducted on the Albert Park Lagoon for the first time as the Yarra was in flood and deemed unfair. The Barwon was used for the heats on 13th May with the final on the Lake on 14th May. The choice of course was retained by the host school. It was in this year that Wesley College purchased a small boat shed from the Southern Rowing Club.

Geelong Grammar won again for the third of six in succesion and rowed this race with a long sweeping stroke. 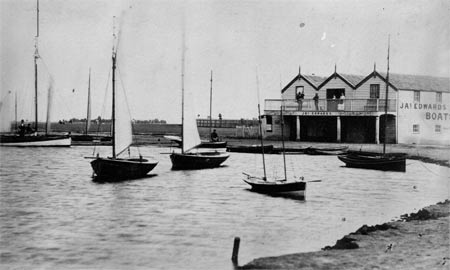 The scene at Albert Park Lagoon at that time

It was reported that the long sweeping stroke of the powerful Geelong crew proved too much for Wesley.

The Argus reported on the finals as folows:

The boys readily obeyed the directions of the starter, and consequently were quickly sent away. The Wesley, rowing at about 42 strokes to the minute tried hard to increase the temporary advantage given to them by the handicap, but Geelong, at about the same stroke, jumped up, and having caught them in less than 200 yards, slackened down to 38, laid themselves well out, and getting hold of plenty of water, sent their craft along in excellent style. The Wesley soon tired of rapid stroking, fell to 39, rowing with plenty of life. At Obstruction Island the Geelong were about clear, and the Wesley well steered, roused by the shouts of some friends on the Island, drew up a little, but again dropped back until half a length separated the bow from the stern of the leading boat. At Pagoda Island the Geelong were a length and a half ahead, still rowing 39. Upon reaching the corner, 300 yards from home, the Wesley College crew made a splendid rally. Their efforts were, however, of no avail against the superior form and power of Geelong, who, having plenty in reserve, added a few pounds to the work, once more drew away, and won by two lengths and a half.

The Geelong Advertiser reported on the heats as follows:

The annual rowing contest between the oarsmen of the public schools was commenced on the Albert Park lake this afternoon.

Melbourne got away first and led for about ¾ of a mile, when they were collared by Geelong, who won with a lot in hand by three or four lengths.

The Wesley got away with a lead, and at halfway were leading by 3 lengths. This gap the Scotch reduced considerably, but after a hard race Wesley won by a good length.

(This race was not conducted as part of the Head of the River regatta. It was raced on the Barwon on 21st October 1887.)

Mr C Shannon acted as starter and umpire, whilst Mr Hope acted as judge before a reported "fairly good attendance of spectators".

The Argus reported the race succinctly:

The race was rowed starting from the top of the Barwon course to the bridge, a distance of one mile. The Geelong crew won easily by two lengths.