Wesley won for the second of six times in succesion.

In some records, Geelong Grammar is noted as finisihing third. Iit is not altogether clear why such a report exists.

No second crews raced this year and this event was not to return until 1917.

The Wesley Shed at Albert Park Lake was remodelled in 1902 to fit eight oared boats with great effect in 1902. 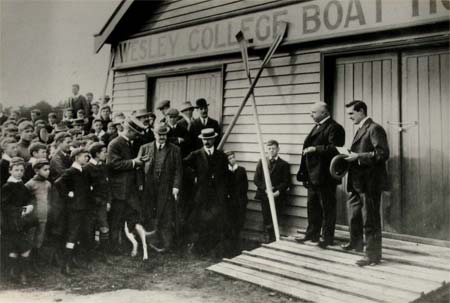 The Opening of the new Wesley Boatshed at Albert Park Lake

The Headmaster Mr L A Adamson performed the opening, Mt J Stewart is on his right and the first crew coach Mr Charles Donald is in front of the other door in a bowler hat.
Photo from the walls of the Wesley College boathouse 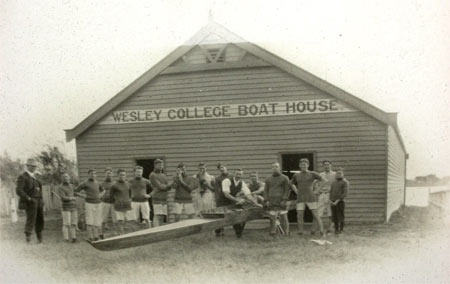 The rear of the newboatshed at the same time.

Photo from the Wesley College boathouse 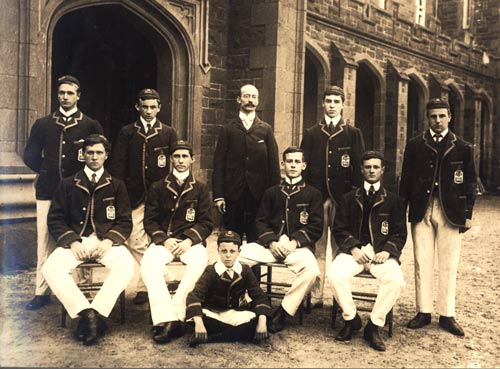 The Argus reported as follows:
The race was started by Mr. A. B. Sloan from a point about 150 yards above the Botanical-gardens bridge. The Melburnians at once took the lead, and with the first bend in their favour increased their advantage materially. Down the long stretch to Brander's, Wesley gradually drew on the leaders, until at the ferry the boats were almost level. Side by side the boys raced till nearing the corner before the home stretch. Here Wesley had the advantage, but the Dark Blues, though nearly a stone per man lighter than-their opponents, were not to be shaken off, and as the boats rounded the bend there was not a quarter of a length between them. Wesley, however, finishing as strongly as they did at Geelong, drew away, in the last 100 yards, and won by a bare length. It was a fine contest, in which both crews rowed hard and well, but victory rested with the stronger and better crew. 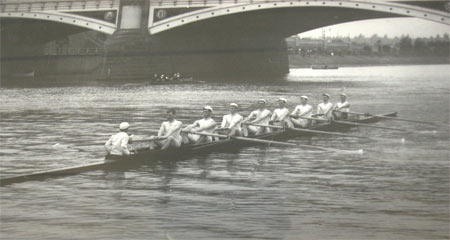