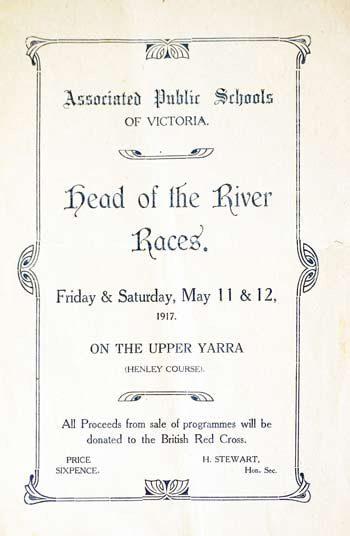 This fiftieth Head of the River was a great race for Geelong Grammar. They were 1 1/2 lengths behind at the half mile mark and then went on to win by 2 lengths. It was a run away win of the highest order. Miss Betty Fairbairn presented the Fairbairn Challenge Cup.

The race was conducted on the Upper Yarra. Second crews were again reintroduced but were not raced at the Head of the River regatta.

In a report of the race in The Referee, there was a poignant reminder of the Great War, where so many APS lads fought and died: ‘There was another great gathering on Saturday [the day of the final], with khaki clad old boys very much in the picture.’ 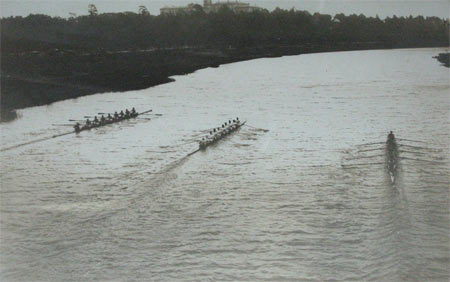 WC drew the south station and led well early. GGS then eased past WC but crabbed under Morell Bridge allowing WC back into the race - see picture above. GGS recovered well and soon passed WC around the big bend as did GC. The two Geelong crews fought out the race but GC caught a crab 70 yards from home enabling GGS to be easy winners by two lengths.

As the crews rowed up the start, Wesley showed the best form, their recovery being very bright. Good judges, however, soon realized on comparing weights, that Wesley would have their work cut out against the wind (earlier mention in the article of strong, gusty winds). Their average weight was 10 st. 11lb., comparing with 11st. 2 lb. of Geelong College and 11 st. 7 lb. of Geelong Grammar School.

The three crews got off the mark rapidly, but Wesley were the first to show in front, and, having the advantage of the inside position at the first bend, they led by a canvas on reaching the bridge. Geelong Grammar were a similar distance in front of Geelong College. The crews kept these positions to the newly cut corner. Upon reaching the corner a gust of wind struck Geelong Grammar and Wesley, and swung both boats considerably off the course. When the crews straightened up the bow in the Geelong Grammar School “crabbed” badly, the crews losing a length and a half. Geelong College then went ahead, and coming into the straight were leading from Wesley and Geelong Grammar. The latter now made a great effort, and slowly caught up on the leaders, passing Wesley about Brander’s Ferry, and, drawing level with Geelong College at the end of the Henley staging. Shortly after this, Geelong College crew tired, and one of the men “crabbed”, the crew falling about a third of a length behind Geelong Grammar at the time. The latter eventually won by two lengths, Geelong College being half a length ahead of Wesley. The time was 5 mins 52 1-5th sec. Grammar effort was a fine piece of work, and their solid leg drive and hard catch stood to them well in their stern chase.

The Argus and other sources had the margin between second and third as 3/4 length.

The Age reported extensively on the heat as follows:

The Geelong Grammar crew, which was a very solid combination, jumped off at the start very quickly. Scotch were rowing much below their usual standard, and by the time they reached the bridge the visiting crew had nearly a length to the good. Passing under the bridge, the Scotch crew had the better form, and drew up on the leaders. Geelong came round the bend very wide, and were about ¾ of a length to the good. Scotch still made a big effort to draw up, but nearing Brander’s they got very short, and the Geelong crew, with a fine leg drive and firm finish, sent their boat well ahead, passing the judge with a lead of two and a half lengths.

This heat also resulted in a comfortable win for the visiting crew. The Geelong College boys were very fast at the start, and Xavier did not get away too well, the blade work was not being clean or even. After half a minute’s rowing, Geelong College had a length’s lead. Shortly after passing the bridge they settled down to a solid row at 32 strokes to the minute, and gradually increased their lead until they eventually won by two and a half lengths.

As predicted, this proved the most exciting race. Wesley, who had practiced a lot of fast starting, were best off the mark, and at the bridge they led by half a length. Melbourne Grammar then began to move up, and by the time they reached the big bend had drawn level. Making the best use of their inside position at the bend, Grammar gradually went to the front, and when entering the straight it was seen that they had a length’s advantage. A hard race ensued to Brander’s, but Grammar maintained their lead. After reaching the Henley (unreadable), Wesley had made a great effort, and at the end of the staging were not more than a canvas behind. The excitement was intense, and it looked as though Grammar were to win, but Barden came with a magnificent sprint in the last half dozen strokes, his crew responded and Wesley snatched victory with barely a canvas level. Towards the finish the blade work in the winning boat was much better than that of the Melbourne Grammar Boys. 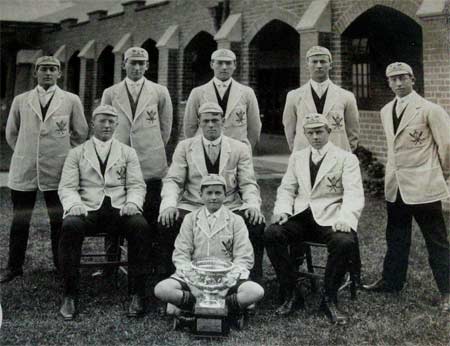 (Not conducted at the Head of the River regatta but the week before on 5th May.)