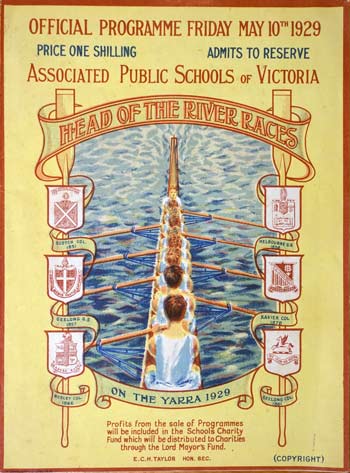 Xavier College continued their winning ways with another win on the Upper Yarra course before a record crowd of between 100-140,000 spectators. No doubt the sunny day was of benefit after the windy, wet and cold regatta of 1928. The heats were conducted on May 10th with the final on 11th May.

The race was tight for the first part of the race but Melbourne Grammar on the north station fell back to a length behind by the half way mark. Scotch raced with a high rate and noticeable rush whereas Xavier rowed with a long steady swing. The crews were locked together until Swan Street when Xavier started to draw away. The winning margin was 3/4 length with Melbourne Grammar 3 lengths further back.

This was the sixty-second Head of the River. 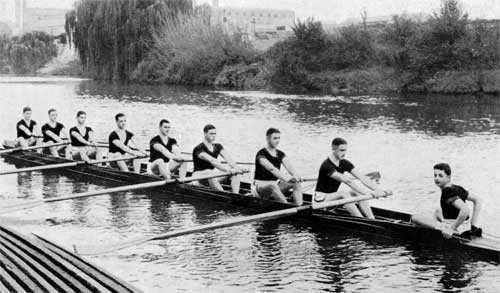 The Age reported the race in the following terms.

Melbourne Grammar went off at 36, Xavier striking 40, and Scotch touched the high rate of 44. MGS soon began to drop back on the run to the bridge. Scotch slowly forged ahead of Xavier. Scotch reached the bridge in the fast time of 50 sec, with a lead of a third of a length from Xavier who were nearly ¾ of a length ahead of MGS. Scotch were still rowing at the high rate of 40, and kept in front of the Kew boys. At the corner, Scotch still had an advantage although it was reduced to a ¼ of a length, the Xavier boys being content with a solidly rowed 36. MGS were dropping further back, and their rowing was lifeless, it now being evident that the dark blues were out of the contest. Racing down the straight, Scotch, still striking at 40, were becoming rather scratchy and slowly the Xavier crew forced their boat up, and as the crews reached the booms, Scotch had an advantage of only 2 feet. The leaders’ rate had now dropped to 38, and Xavier maintained a solid lift and drive at 36, whilst MGS, rowing 34, were two lengths to the bad. At the Henley staging the two crews were level, and Xavier then began to forge ahead slowly. At the west end of the Henley staging Xavier had an advantage of nearly half a length. The Scotch boys were unable to get more pace out of their boat, and Xavier’s position was improved by a further ¼ of a length over the last 150 yards. The crew won amidst great excitement. Xavier won by ¾ of a length, with 3 lengths between 2nd and 3rd. Time 5 min 6 sec. 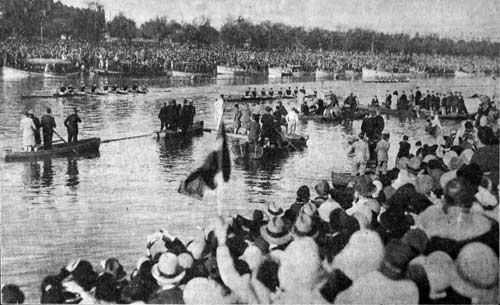 The finish of the race before a huge crowd 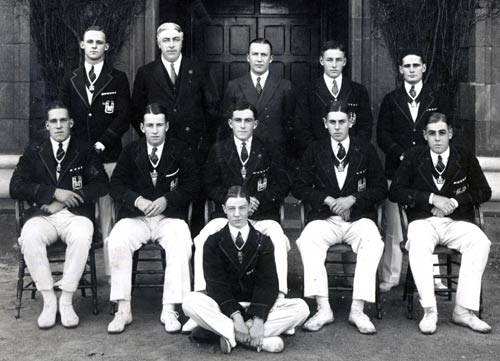 The Age reported on the heats in the following terms -

Melbourne Grammar commenced at 37, whilst Geelong Grammar started at 36. There was little between the cress in the first 12 strokes, but No.4 in Geelong temporarily lost his slide, and MGS quickly gained 1/3 of a length. Geelong Grammar quickly recovered, and the same distance separated the crews passing under the bridge, which was reached in 55 sec. The rating of the crews dropped coming to the storm water drain, Geelong Grammar rowing at 33 and MGS 35 strokes to the minute. The was a good swing in both boats but the MGS crew kept a better length. Racing tot the bend, the Geelong crew gained slightly, and had now settled down to 32, and appeared to have the measure of MGS. Straightening up into the Henley straight, MGS made a well-timed effort, and again held a 1/3 of a length’s lead. Just prior to Brander’s Geelong quickened and reduced the margin to a canvas. From Brander’s down the Henley staging the canvas advantage was still maintained despite challenging sprints from the Geelong crew. Near the stone wall Geelong Grammar got within two feet, but could not continue the run, and MGS drew away in the last 100 yards to win by 2/3 of a length. Time 5 min 10 sec.

Scotch, as in training, commenced at a remarkably high rate of striking, 43. Geelong College starting at 39. It was a great race to the bridge, which Scotch reached with a canvas to spare in 53 sec. Geelong College could not maintain the fast striking rate, and eased to 34, whilst Scotch, now rowing at 38, forged slowly ahead, and coming to the new cut corner had increased their lead to half a length. Geelong College, now rowing at 32, were holding Scotch, who kept a snappy stroke going , keeping the boat well up on top of the water. The blade work of the Scotch crew coming to Brander’s was particularly good, and with plenty of dash in the rowing. College’s task looked hopeless. ¾ of a length separated the crews at Brander’s, where Geelong made a forward move and gained slightly, which was promptly answered by a sprint by the Scotch crew down the Henley straight. Geelong College could not bridge the ¾ of a length necessary to draw level. Scotch sprinted from the stone wall and, not easing their lead, passed the judge’s box with a length to spare. Time: 5 min 16 sec.

Wesley made the pace a cracker from the start, getting cleanly away from the start at 40. Xavier struck 37, but did not get the boat moving well till after the first few strokes. Once settled down to their work both crews rowed splendidly. Rowing the faster rate, Wesley drew ahead inch by inch, and reached the bridge a canvas in front of Xavier, in 53 sec. Xavier were now rowing at 34, with a powerful drive. Wesley, striking 36, had a better swing, but the weighty Xavierians gradually gained, and at the new cut corner were within a foot of Wesley. Wesley, the lightest crew in the race, still held their slight advantage of a foot, with their neat rowing, were proving a tough proposition to the heavier crew. At 36, they raced to Xavier’s 33. Reaching Brander’s both crews were level. Neither crew attempted to sprint, both maintaining a strong driving swing, and for 100 yards the bows of the boats were exactly in line. Down the Henley staging first Xavier, then Wesley would lead by a foot, and to the spectators a dead heat appeared to be the likely verdict. It was expected that Xavier would have a little more in reserve and would draw away at the finish. But Wesley boys stuck to their task tenaciously, and refused to be shaken off. At the stone wall, 100 yards from home, the positions were unaltered, about 6 inches separating the boats as they see-sawed in front of one another after each stroke. About 20 yards fro, the post a slight faulter in the Wesley boat gave Xavier a momentary advantage, but, quickly recovering, Wesley were with Xavier again. In the last desperate half dozen strokes, the extra weight of the Xavier crew told, and they crossed the line with 3 feet to spare. Time: 5 min 13 sec.

The Age reported that: Mr. James got the crews away to an excellent start, and Melbourne Grammar quickly went to the front. The steering could have been much better, and in this connection Xavier gradually overhauled Grammar, and drew ahead. Grammar again challenged, but could not last long enough, Xavier winning by a third of a length, a length and a half between second and third. Wesley finished fourth, a canvas behind Scotch.

The Age reported that: MGS won by three quarters of a length, a canvas between Wesley and Scotch in second and third, Xavier a length and a half away in fourth. 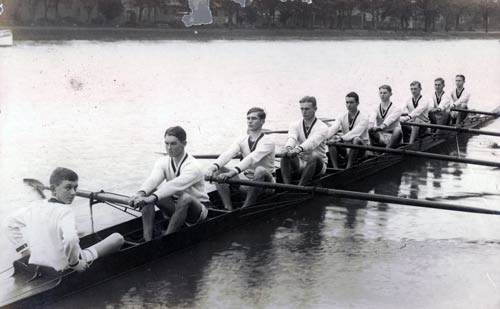 The Age reported the margins as follows: MGS won by ¾ of a length, a length and a half between second and third, Xavier a canvas away in fourth.