The forty-third Head of the River was conducted on the Upper Yarra with a three crew final and with Wesley continuing its winning ways.

Owing to the death of the King, the races were postponed until Saturday 21st and Monday 23rd May.

Xavier met Scotch in the heats and lost by only 1/2 length in a tight race. Wesley won their heat in even a tighter race, defeating Geelong Grammar by only 4 feet.

The final was rowed at 4pm with a strong north westerly wind blowing. Great difficulty was experienced in getting the crews away. Whilst Scotch got the best of the start, it was Wesley on the north station who prevailed.

The Scotch crew contained Clive Disher, the man who was to stroke the AIF crew to victory in the 1919 Peace Regatta for the King's Cup. The Scotch crew was coached by Albert Lindbalde, an early winner of the Head of the River race in the last century.

No second crew races were conducted. 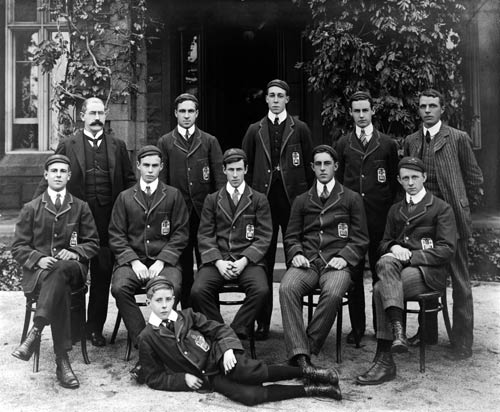 The Age reported on the final well.

The Argus reported on the heats.

Rowing with a nice swing and a good length in better form than shown in practice, the Grammar School were soon in a favourable position. The Geelong College crew rowed well together and brightly, but were not swinging far enough forward, and the result was they were not getting a commensurate amount of stroke for the distance they were travelling up and down their slides. They stuck gamely to their tasks although behind, but were beaten by two lengths in 5 mins 13sec.

It was generally anticipated that Scotch College would score a comparatively easy win in this event, and the excitement was great when it was seen that the boats were level at Brander’s Ferry and Xavier were rowing well together well in mid stream where the strongest current was running. Scotch College, however relieved the anxiety of their friends at about three quarters of a mile by urging their boat slightly ahead. The stern half of Xavier’s crew then weakened, and could not answer their opponent s spurt. Mr. Ross, their coach in previous years ascribed the change which came over the race to the pipe band of the Scottish regiment striking up at that moment on the south bank, and encouraging the Scotch crew while it dismayed Xaviers. He will profit by the experience and have the Irish pipers advantageously posted next year. Scotch won by three quarters of a length in 5 mins 7 secs.

This was the best of the heats. The crews came rather close together at Duke’s Bridge but at a warning from the umpire the Geelong crew got well over to the north. Wesley swung into the straight with well over half a length lead, but Geelong Grammar were rowing with a quick uniform lift, and as though they could go miles at the pace. At Brander's Ferry Wesley were just half a length to the good, and the stern of the Geelong boat was sweeping along unmistakeably past the stretchers and thwarts of the leaders. A desperate spurt was imperative and Doubleday, the Wesley stroke, made it, well backed by his crew. They increased their lead to nearly three quarters of a length, but it was Geelong’s turn then. Lieut-Colonel Garrard their coach, sounded a shrill railway guard whistle, which was the only sound to be heard through the din of cheering and yelling which was going on on both sides of the river. Spowers called on his boys, and again that ever travelling stern passed along the Wesley bow side, but it was loo late. The race ended with Geelong needing still 4ft to make up. Though the shouting ceased, it was a long time before the excitement died down and the crowd remained discussing the race long alter the judge had given his decision. 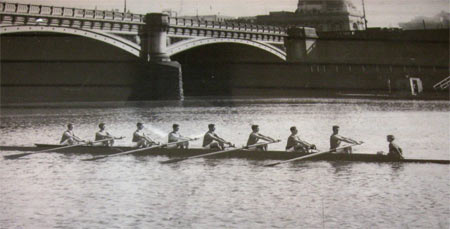