The thirty-second Head of the River race was conducted on Albert Park Lake on 5th & 13th May and the course enabled a first & final. Scotch won in a good fashion under the great Alex Sloan. Again outrigger fours with sliding seats were used.

Eric Tulloch, the three man of the MGS crew went onto coach MGS first crews from 1921 to 1926. Sadly the night before the final in 1926, he was shot by a burglar in his home.

The river improvements on the Upper Yarra course were being completed at this time. 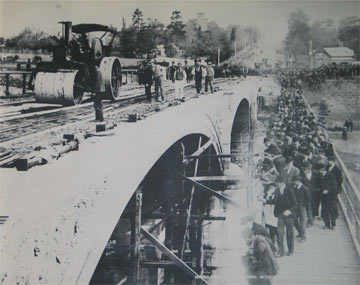 Note that the river was yet to pass under the bridge. This was to occur with the river improvements at that time.
Photo courtesy of Mercantile Rowing Club

The Age reported on the race as follows:

The annual contest between the first four-oared crews of the public school was rowed yesterday afternoon on the lake, at Albert Park. There was a strong northerly wind, but no accident occurred throughout. The competing crews represented the Scotch and Wesley Colleges and the Melbourne and Geelong Grammar schools. Melbourne had rather the best of the start. In a dozen strokes Scotch College gained a slight lead, and MGS had a ¼ length lead of Geelong Grammar and Wesley crews. The Scotch then forged further ahead, and Melbourne Grammar increased its lead upon Geelong and Wesley. Nearing Obstruction Island, the Scotch were fully two lengths ahead of Melbourne. In the last half mile Melbourne Grammar closed a little upon Scotch College, which shot past the post a length ahead. Geelong stopped just before the winning post was reached, and Wesley rushed passed and secured third place. 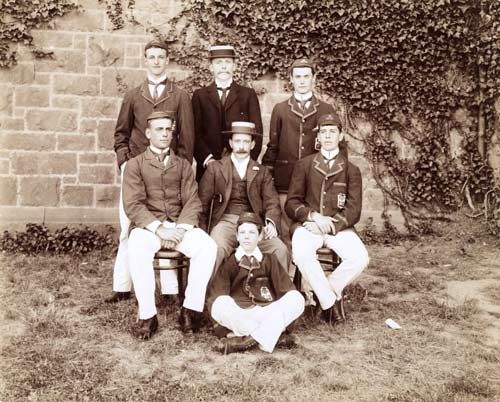 (This was not conducted at the Head of the River regatta but on 19th May.)

The Age reported on the second crews as follows:

The annual four-oared race for second crews of the public schools was rowed yesterday afternoon on the lake at Albert Park. The Geelong and Melbourne Grammar Schools and Wesley College were represented, and after a splendid tussle, Geelong beat Melbourne Grammar School by 2 feet only, Wesley half a dozen lengths behind. Mr Linden, head master of the Geelong Grammar School, acted as judge, and Mr. Geo. Upward as starter and umpire.