The sixteenth Head of the River was conducted upstream on the Upper Yarra on 11th and 12th May 1883.

Melbourne Grammar won both events this year and in good fashion, 1 1/2 lengths in front of Scotch College in the main race.

This was the ninth and final year in which John Wallace coached the Scotch crew. 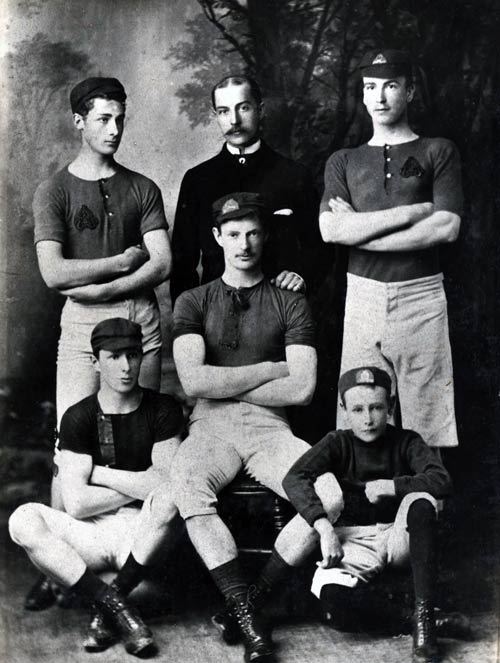 Scotch College were firm favourites but Grammar raced superbly to comfortably win. Strange to say, but all members of the Scotch crew were red heads.

The Argus report on the final was as follows:

The Scotch College caught the water a moment before the word off was given, and rowing a very fast stroke, showed first in front and led the way up to the pontoon sheds. The bustling, however, had the effect of slightly disorganizing he crew, and the Grammar school, rowing a quiet by steady stroke, took the lead from them at the first corner. From this point the latter gradually increased their advantage until they were two lengths and a half ahead at Brander’s Ferry. Here the Scotch College began to come up a little, and rounding the baths corner the nose of their boat overlapped their opponents’ rudder. The rowing in the last 300 yards was very pluckly, both crews doing their utmost. The positions, however, remained unaltered, the Grammar School winning a well-fought contest by just a length.

E1: 1st MGS, 2nd WC, Margin: 6 lengths
E2: 1st SC, 2nd GGS, Margin: easily. The Geelong crew three man caught a crab breaking the oar. He leapt out of the boat to save carrying him but it was to no avail. Some Geelong supporters were upset that the Scotch crew continued to race after the oar breakage. However the rowing authorities assured all that a breakage resulting from a crab was a responsibilitity of the crew.

At the word “off!” the Grammar School caught the water first, and at once took the lead. Their rowing was very good, and Osborne setting his crew a good lively stroke, gained an advantage of a clear length before reaching the pontoon sheds. The Grammar School continued to gain upon their opponents, and ultimately won by about four lengths.

The Scotch College made the best start, and this might be given as the end of the race, as on the second or third stroke the oar of No.3 in the Geelong boat cracked, and then broke into splinters from the bottom up to the handle; evidently thinking his companions might do better without him in the boat he then jumped overboard, but, of course, without any good resulting, the Scotch rowing away and winning as they pleased.

(This was not raced as part of the Head of the River regatta.)

The Argus reported on this race with crews and margin only.