The seventy-first Head of the River on the Upper Yarra brought Mebourne Grammar joy with a good win over Geelong Grammar. Interestingly, there were two false starts for the final, both being starter error. The starter's pistol misfired on two occasions. The regatta was conducted on 12th and 13th May 1938.

The Junior regatta was reduced to seventh crews this year through a lack of demand from the schools.

The crews were drawn with MGS on the north, GGS on the centre and SC on the south. Despite the two false starts due to the malfunction of the starters gun, the start was good. It took until the half mile before MGS broke away from GGS who had already left SC in their wake. By the Henley Staging, MGS led by a length but GGS challenged but only managed to reduce the lead.

The Argus reported the final as follows:

The three crews were ready on the line about five minutes before the time for the starting and after two false starts, in each of which Geelong Grammar broke the line, due to Mr. H. Green’s pistol misfiring, were sent away at last on even terms. MGS and Geelong Grammar jumped off at 40 to the minute, and Scotch 41. The three crews rowed together for the first dozen strokes, and when they settled down to a solid 36, MGS had a lead of a couple of feet. Geelong Grammar was a canvas ahead of Scotch.

The lead changed, however, and at Morell Bridge, reached in 54.5 sec., Geelong Grammar was leading MGS by a canvas. It was a lead that was not to be long maintained however, for MGS, which had dropped the rate to 34 at the ¼ mile, steadily moved to the front. Racing to the big bend MGS continued to go ahead, and at the half-mile reached in 2 min 28 sec, was leading by half a length from Geelong Grammar, Scotch being ¾ of a length farther back. The striking rates at this stage were MGS 34, Geelong Grammar 34, and Scotch 35.

They swung into the straight with MGS well steered, taking every advantage of the inside running and leading by ¾ of a length. Thereafter the only change in positions was that Scotch dropped farther back. MGS passed Brander’s still leading by ¾ of a length, still striking 34, rowing with any amount of power, and holding its own against every challenge thrown out by the lights blues.

Coming down the staging MGS had the race won. Weir, the stroke, rowing a very “heady” race”, was watching Geelong Grammar carefully and was able to anticipate every sprint. A last desperate effort by Geelong Grammar at the end of the staging gained it a ¼ of a length, but raising the rate to 36, MGS went away and won by ¾ of a length in 5min 16.4sec. Scotch was three lengths further away. 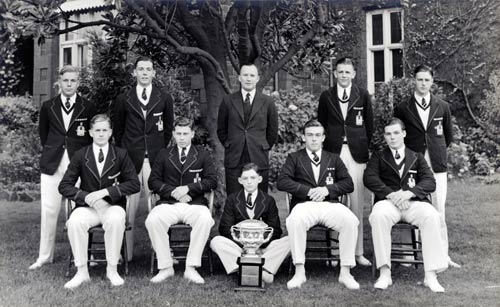 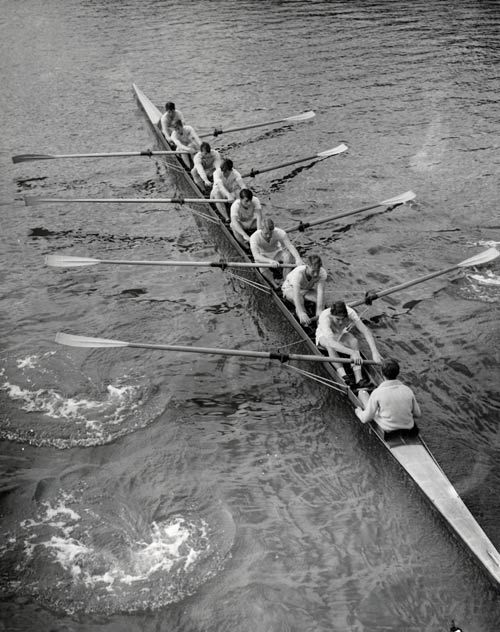 Geelong Grammar School racing on the Yarra in the final

Photo from the Guerin Collection

Photo from The Scotch Collegian August 1938

Heat results:
E1: MGS, 2nd WC. Time: 5:11.0, Margin: 1 length.
MGS settled well after the started to take the lead and moved away from WC gradually throughout the race. Despite valiant efforts by WC, MGS went onto win well.
E2: 1st GGS, 2nd GC. Time: 5:12.4, Margin: 1 1/3 lengths.
GC had a good start and led to the big bend. GGS caught and went past GC around the bend and used its better weight and strength into the breeze very effectively.
E3: 1st SC, 2nd XC, Time: 5:14.0, Margin: one canvas.
The previous dead heats between XC and SC looked likely to be repeated again this year with a top race. Whilst SC had the better of XC for most of the race, XC caught SC around big bend setting up a great finish. As both crews fought for the line, SC maintained their form better and XC began to tire. 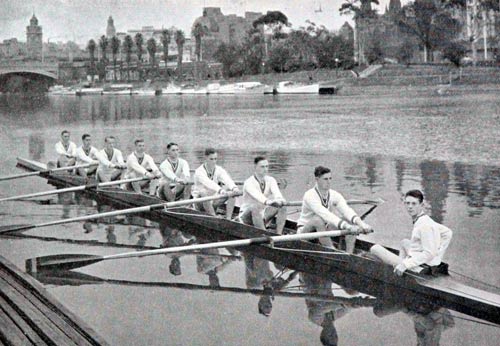 The Argus reported the heats this way:

Mr. H. Green sent the crews away to an even start, both leaving the mark at 40, and settling down quickly. MGS struck its swing in the first dozen strokes, and breaking the rate down to 33, led by slightly more than a canvas at Morell Bridge. Wesley at that stage was striking 36. The time for the run was almost 51 seconds. Although they were clouting the water almost every stroke on the recovery, MGS continued to draw ahead. They had a half-length lead at the ¼ mile, and ¾ of a length at the half-mile, which was reached in 2 min 22 sec.

Grammar’s striking rate had dropped to 34 and the crew was swingin along nicely and rowing well within itself, there being a clearance of 6ft. Wesley was still hitting 36 and was not clearing more than 2ft.

A determined effort by Wesley gained it some ground soon after the half-mile, but Grammar had no difficulty in drawing away again. Approaching Branders the time in the Wesley boat was bad, almost every member of the crew getting in ahead of stroke. A bad roll at Branders threw Wesley farther behind. The full force of the breeze was then being felt, and MGS swung steadily ahead at 32, compared with Wesley’s 36, and with a sprint at the finish MGS won by a length in 5min 11sec.

Dashing away from a good start and striking 42 to Geelong Grammar’s 39, Geelong College soon established a slight lead. Both crews went unnecessarily wide on the run to the bridge and lost ground. Geelong Grammar appearing to be the greater sufferer.

At the bridge, reached in 50 sec, College had a lead of 3ft., striking 38 to Grammar’s 36. Passing the ¼ mile peg College had increased its lead to a ¼ of a length, but it was struggling, whereas Grammar was steady and was rowing with better length. Racing to the ½ mile Grammar drew up on the leaders and, after passing the half mile in 2.26, the crews were level.

At Brander’s Grammar led by a canvas, and then slightly raising the rate, drew away as the booms were reached. Grammar was at its best at that stage, but there was too much hurry forward in the College boat, and this was fatal against the breeze, which had strengthened. As they raced past the staging Grammar drew farther and farther away, and though College threw out challenge after challenge it could not make any impression. Grammar won by a length and 1/3 in 5min 12 2-5th sec.

A rather scratchy start by Scotch, which left the mark at 42, gave Xavier, who jumped away at 39, a slight advantage, but it was an advantage not maintained, because at the bridge, reached in 52 4-5th sec, Scotch was almost a canvas in front. Both crews striking at 36, but there was more life and vigor in Scotch’s work than in that of Xavier. Making good use of the inside running on the bend to the half-mile, Xavier hung to Scorch, and was still only a canvas to the bad when the half-mile was reached. The time was 2min 26 sec.

So they raced into the straight entrance and against the breeze Scotch’s greater length, steadiness and brightness was a decided advantage. Still Xavier could not be shaken off. At Brander’s, Scotch’s lead was a ¼ of a length. Raising the rate to 36, Xavier drew up to within a canvas of Scotch, who, responding well went away again.

Sprint answered sprint in most exciting fashion during the race past the stone wall until with only the distance between the staging and the judge’s box to be covered it looked as though Xavier would win or make a dead-heat of it. However, Scotch had something in hand, and a splendid finishing burst gave it victory by a canvas in a magnificent race. Time: 5 min 14 sec. 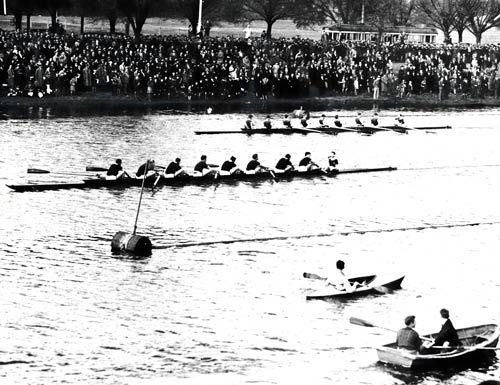 Photo from the Guerin Collection 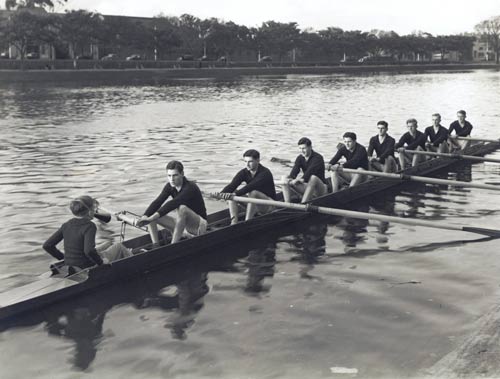 The crews were drawn with XC on the north, MGS north centre, SC south centre and WC on the south. XC and WC immediately got a lead and then fought a great struggle with MGS finally drawing away to win by 1/2 length.

The race was drawn with SC on the north station, MGS north centre, WC south centre and XC on the south station. XC got the best of the start with a high rating and managed to get a canvas ahead of WC. Whilst WC fought hard, the XC crew was too strong. 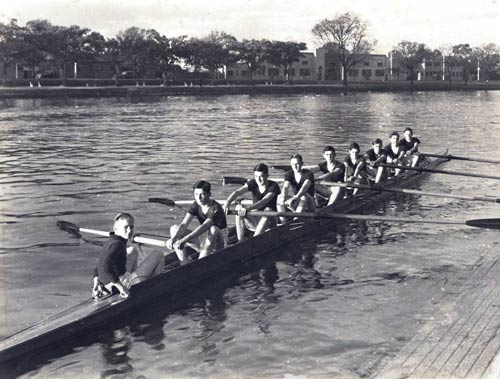 The crews were drawn with MGS on north, SC centre and WC on the south. 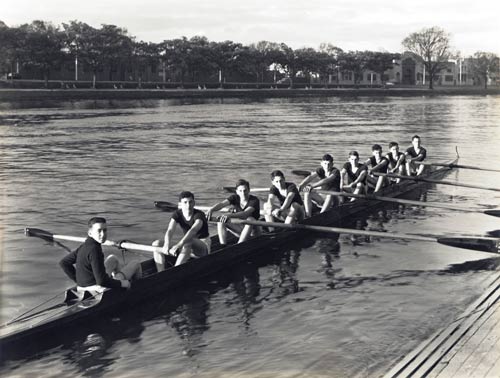 Both crews raced side by side until the last 100 yards when a sprint by Scotch broke the deadlock. 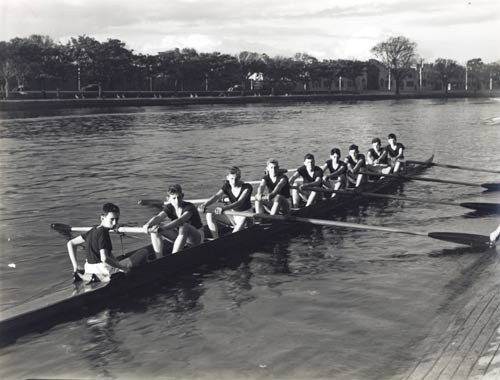 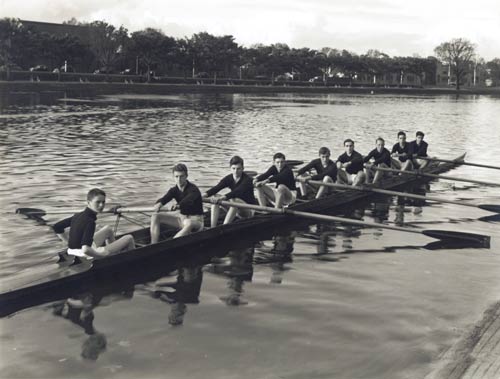 The Scotch 6th and 7th crews obtained their designation by the toss of a coin. As both crews won, the ordering of the crews

This was an easy win for Scotch. 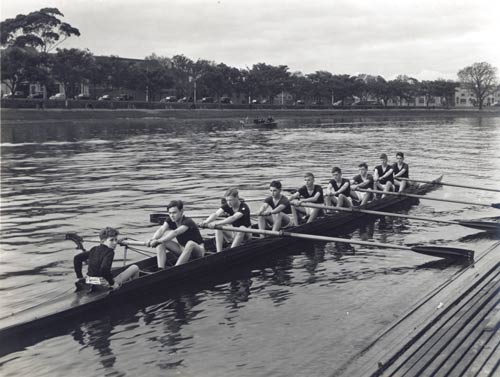