The fifty-eighth Head of the River was conducted on the Upper Yarra course on 8th and 9th May before a crowd greater than 50,000.

Scotch were last at the big bend but worked their way through the field. Interviewed after the race, the stroke Keith Cameron said: "We won because the crew swung well together. Although we were behind in the early part of the race, I was not alarmed, and just kept up the swing, and they came back to us. When I called at the finish, every member of the crew responded gamely and we got there." 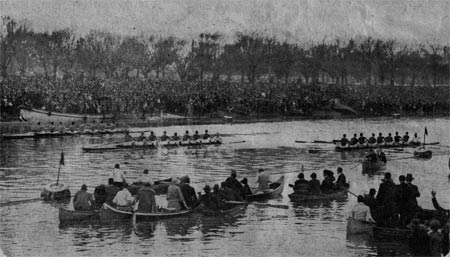 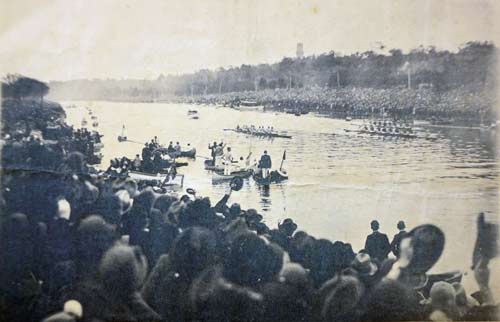 And from the other side of the river 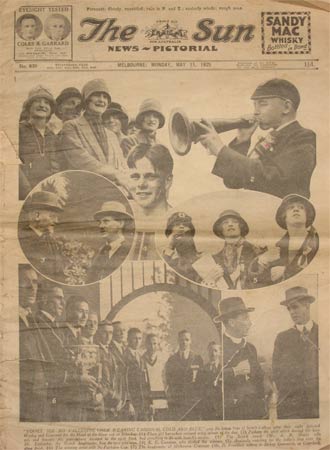 The front page of The Sun on the Monday following the race.

The popularity of the race can be assessed by seeing that both the full front and back pages of the The Sun were devoted to the Head of the River. Middle left is Scotch Headmaster Mr Littlejohn and Scoch coach Alex Sloan. To the right of them is Scotch stroke Keith Cameron, Below those pictures is the presentation of the trophy to the Scotch crew by Mr Jim Fairbairn, son of George Fairbairn. To the right of that is Melbourne Grammar Headmaster Mr Franklin and Bishop Cranswick of Gippsland.

The Argus reported on the final as follows:

It was a fine start, all the crews getting off the mark well. Melbourne Grammar, who had the best station for the first half mile, were first to show in front, whilst Wesley, despite the bad station, soon began to forge ahead of Scotch. Melbourne Grammar were showing great pace and reached the bridge half a length in front of Wesley, who in turn wore nearly half a length ahead of Scotch. At this point things did not look too well for Scotch, who, on the centre station, should at least have been able to hold Wesley. After passing the bridge the Grammar eight maintained the lead, but followed the south bank round too far and thereby lost some of the advantage, Wesley drawing up slightly. At the drain near the corner Grammar still had a quarter of a length On Wesley, whilst Scotch were still last. As the crews straightened up Wesley seemed to be a few feet in the lead as the result of an effort, with Grammar a few feet ahead of Scotch. The crews raced down the straight almost level, and it was a great sight to see the boys straining every nerve and muscle, and maintaining a high rate of stroke. The race was so rowed that there was not the slightest chance of any crew having a 'let up' for a few strokes. At Brander's there was little difference between the bows of the three boats, and as they entered the booms Wesley and Grammar were on level terms, with Scotch a few feet away. Towards the Henley staging the Scotch crew, maintaining their form splendidly, forged slightly ahead, and desperate efforts were made by Wesley and Grammar to prevent the leaders getting a further advantage. The Scotch stroke rowed a good length, and was getting the best out of his crew, with the result that the boat forged further ahead. Nearing the finish both Wesley and Grammar slightly increased the rate but made no impression, Scotch crossing the line half a length ahead of Wesley, with Melbourne Grammar a canvas further back. It was a most strenuous race, and all the boys stood up well to the heavy physical strain. Time: 5 min 15 ½ sec.

The Argus reported at length about the heats.

Scotch College got the better start, striking at about 39, Geelong Grammar at about 38. The steering in both boats was perfect. At Anderson street bridge both crews had lengthened out to 36, where Scotch had almost half a length’s advantage, but at the top corner Geelong Grammar school had almost caught up. On straightening up the boats the rate of striking was still about the same. After covering about 50 yards Scotch College had half a length’s lead, which they maintained to Brander’s, rowing cleanly. The Geelong Grammar Boat was at times rolling considerably. Just before reaching Brander’s Geelong spurted, but Scotch again drew away, and at the beginning of the Henley staging had a clear half a length’s lead. Both boats quickened up to 38, and at then end of the staging Geelong again spurted, reducing the distance by a ¼ of a length between the boats. Scotch, however, preserved their form admirably, while Geelong became a trifle ragged. The post was past first by Scotch, with an advantage of 1/3 of a length lead. Time: 5 min 27 sec.

Xavier started at 40, and Wesley at 38. At the commencement Xavier were badly steered, and on the second stroke crabbed. Wesley got a good start, and at Anderson street bridge had a clear length’s lead. This lead was increased, and at the bend they had about one and a ½ lengths’ lead. At brander’s Wesley had maintained a comfortable lead, and had slowed to 33, whilst Xavier were rowing at 36. At this stage the rowing in the Wesley boat was very neat and clean. Xavier were doing their best, but did not have much effect on the leaders. At the stone wall Xavier spurted, but Wesley were apparently not perturbed. Wesley had a good body swing, and better length than usual. Xavier continued to spurt, but there was a lot of splashing and unevenness throughout the boat. Wesley quickened up a little towards the finish, eventually winning by 3 lengths. Time 5 min 29 ½ secs. 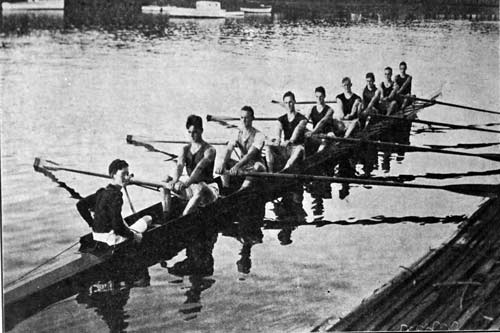 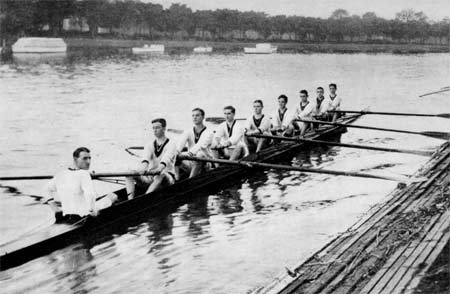 Picture reproduced from Lift her home to victory, lads! A centenary history of the Xavier College Rowing by Michael Lefebvre 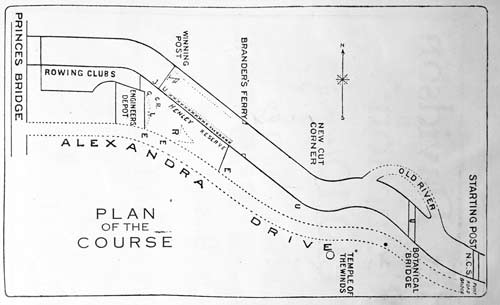 Plan of the Rowing Course