The sixty-fifth Head of the River was held on the Upper Yarra course on 12th and 13th May with again a good crowd well in excess of 50,000 spectators.

Unfortunately the Xavier crew was impacted by illness.

Wesley had the north station, MGS the centre and Geelong Grammar the south. The start was a good one, but MGS set out to make the pace hot from the first stroke, and again rowed ten strokes in the first ¼ of a minute. Geelong and Wesley were striking at a slightly slower rate. MGS reached the bridge in an exceptionally fast 56 seconds with a length lead from Geelong, who were half a length ahead of Wesley. MGS were now striking at 36, and Geelong at the same rate, whilst Wesley were striking at 35. MGS maintained their lead on Geelong on the run to the corner, but Wesley drew up. When the boats came into the straight Melbourne were still a length ahead of Geelong, with Wesley a ¼ of a length further back. MGS were now rowing at 35, keeping the full weight on coming the straight. Wesley and Geelong were striking 36. Towards the finish the Wesley boys found their opponents too strong, and they dropped back, whilst Melbourne drew further ahead of Geelong. All crews showed the effects of the grueling towards the finish but stuck well to the work to the last stroke. MGS won by a length and ¼ with ¾ of a length between 2nd and 3rd. Time, 5 min 13 sec. 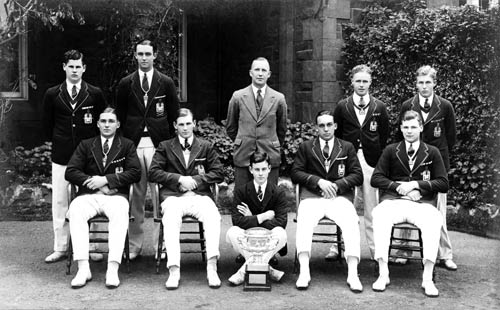 The final was conducted on Friday 13th May on the Yarra River. Melbourne Grammar on centre station got away well and led the whole way. The race for the minor placings had some interest for the first half of the race with Wesley on the north station coming within a canvas of Geelong who were on south station. However the margins spread towards the end with Meobourne easy winners from Geelong with Wesley in last place. 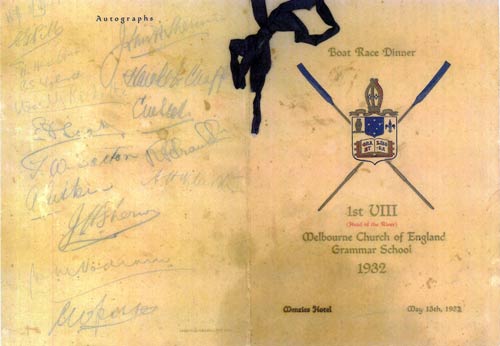 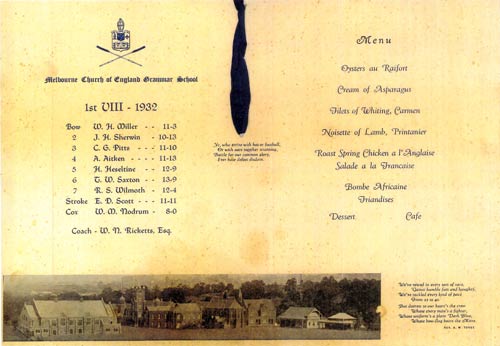 Schools always had dinners to celebrate the event. Above is the menu for the winning MGS crew dinner

Heats
E1: 1st GGS, 2nd XC, Time: 5:19.5, Margin: 2/3 length
Despite Xavier being the favourite for this heat, Geelong led all the way in a tightly fought race.
E2: 1st WC, 2nd SC, Time: 5:26.2, Margin 3 lengths
The first part of the race was very tight but Wesley broke away half way through the race leaving Scotch well out of the race.
E3: 1st MGS, 2nd GC, Time: 5:19, Margin: 1.3 lengths
Despite Melbourne Grammar being clearly a better crew than Geelong College, the Geelong crew put up a "plucky" fight and kept the Mebourne crew honest the whole race.

The Age reported on the heats as follows -

Xavier had the north and Geelong the centre station. Geelong Grammar struck 40 at the start, whilst Xavier went off at the comparatively slow rate of 36. The Geelong crew soon began to forge ahead, and reached the bridge in 60 seconds, with a lead of half a length. The Geelong rating had now dropped to 36, whilst Xavier were striking at 34, and Xavier began to pick up on the leaders, reducing Geelong’s advantage to a ¼ of a length. With the inside running at the corner, Xavier kept moving up, and had almost drawn level as the boats began to straighten up for the last half mile. On entering the straight the Geelong boys began to move ahead again, and continued to strike at 36. It was a fine race, but Xavier were inclined to be a little sluggish, whilst the light blues retained their hard leg drive, which had been so effective despite the lack of support from the bodies. Slowly the Geelong crew drew away, and were nearly half a length ahead along the Henley staging. At this point the body work of the leaders was very irregular. Xavier made an effort to draw up, but there was not much sting in the rowing, and Grammar again held their advantage, reaching the line with two-thirds of a length lead in the fastest time of the day. Time, 5 min 19 ½ sec.

Scotch had the north and Wesley the centre station. Wesley went off striking 38 and Scotch were striking 36. Wesley soon took the lead, and slowly increased it to the bridge, which was reached in 62 seconds, with Wesley a ¼ of a length in front. Scotch now began to reduce the lead, and a great struggle was witnessed to the corner, where Scotch had drawn level amidst great excitement. For a few strokes Scotch seemed to gain an advantage of a few feet, striking 36 to 35 by Wesley. When the boats came into the straight the Wesley crew did a fine piece of rowing, clean and well together with a particularly hard finish. The boat immediately responded and forged ahead. Scotch made every effort to prevent their rivals drawing away, but the clean even rowing of the Wesley eight was so effect that the crew had a length lead at the top end of the Henley staging. Scotch now became thoroughly disorganized, and Wesley increased the lead to two lengths along the Henley staging, and in the last 150 yards added another length to their advantage to win by three lengths. Time, 5 min 26 1-5th sec.

Geelong College had the north and MGS the centre station. Geelong started at 36 and MGS rowed 10 strokes in the first 15 seconds. It was a fine start, and the dark blues immediately commenced to show in front, reaching the bridge in 60 seconds with a lead of a length. The Geelong crew now commenced to move up, rowing with plenty of dash, but not quite so firm a finish as Melbourne. Coming to the corner both crews were striking 32, and Geelong had reduced the lead by half a length. Coming into the straight MGS were still half a length in front. Their fine steady swing and a quick application of the weight as the blades entered the water began to tell, and the dark blues commenced to draw further ahead, until they had a lead of a length and a half. The Geelong boys however, maintained their vigorous rowing, and quickened towards the finish. This slightly reduced the MGS, and they finished a length and a canvas in front. Time, 5 min 19 sec. 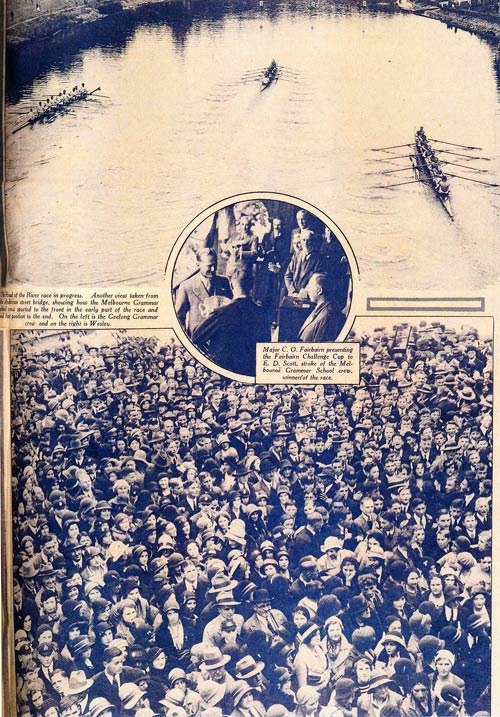 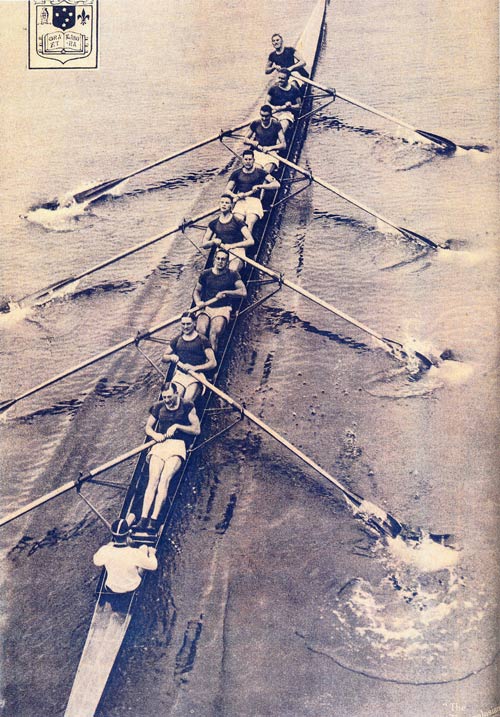 Above: The coverage of the Australasian on 21st April 1932. Directly above is the winning MGS crew going under Morell Bridge.

(These race were not conducted at the Head of the River regatta and were separately amongst the Melbourne metropolitan and Barwon schools. The races were conducted on Saturday 7th May on the Upper Yarra and the Barwon and were regarded still as "unofficial" races. The metropolitan officials were - starter H T James, umpire H Clive Disher and the judge, J R S Cochrane.)

Metropolitan schools
Time: Not known
Margins: 0.5 and 1 length with one foot between 3rd and 4th

This was the race of the day with a great struggle between Melbourne and Xavier. Grammar were best off the mark and led early. Xavier raced strongly to pass Grammar and take a half a length lead. Grammar then spurted to regain the lead and win by half a length. Wesley and Scotch fought out the third and fourth places strongly but both crews were a length behind Xavier.

The Age reported on the race this way: The Melbourne Grammar School crew was the first to gain any advantage and at Brander’s was a canvas in front, with the others on equal terms. Xavier, rowing at a fast rate of striking, challenged for the position nearly the Henley staging, and, still rowing at 40, passed the leader. It was half a length in front down the staging. MGS came again and displaced Xavier at the city end of the staging. Xavier tired towards the finish and was half a length behind MGS as the crews passed the line. Wesley and Scotch, a length further back, fought hard for third position, Wesley only being a foot ahead.

Geelong College defeated Geelong Grammar by half a length.

(These race were not conducted at the Head of the River regatta and were separately amongst the Melbourne metropolitan and Barwon schools. The races were conducted on Saturday 7th May on the Upper Yarra and the Barwon and were regarded still as "unofficial" races. The metropolitan officials were - starter H T James, umpire H Clive Disher and the judge, J R S Cochrane.) 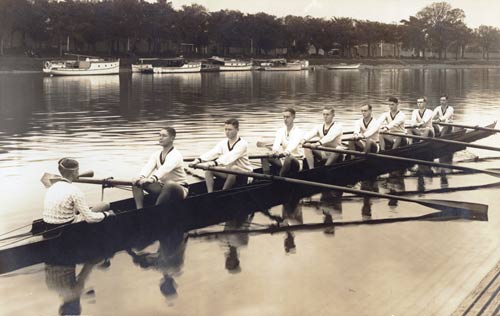 Scotch led all the way but did not have the race all their own way. Wesley was in third place early in the race and passed Melbourne Grammar then went after Scotch. It was a great race. Scotch College were very pleased as this was their first win in this race.

The Age reported the race this way - Melbourne Grammar were fastest off the mark and had a slight lead in the first 100 yards, when Scotch, rowing well, drew level. Approaching the staging Scotch went to the front while Wesley, rowing at a fast rate, displaced Grammar for second place. Wesley challenged, but Scotch held its advantage and was a canvas ahead of Wesley as it passed the post. MGS was half a length away third, with Xavier fourth two lengths farther astern.

Geelong Grammar was by a length and a canvas

(This race was not conducted at the Head of the River regatta and was amongst the Melbourne metropolitan schools. The race were conducted on Saturday 7th May on the Upper Yarra and were regarded still as "unofficial" races. The metropolitan officials were - starter H T James, umpire H Clive Disher and the judge, J R S Cochrane.)

The Age reported on the race - The crews started at the site of the old Brander’s Ferry. Both went away at an even start, MGS being the first to break the line. At the staging the dark blue crew was a ¼ of a length ahead. Scotch challenged as the crews raced down the side of the Henley wall, but Grammar, rowing better, drew away and passed the post with ¾ of a length to spare.