Geelong Grammar was again the winners and again from Melbourne Grammar.

The nineteenth Head of the River was conducted on the Barwon River for the second time with heats on 21st May and the final the next day.

Melbourne had been forced by the regular Yarra River floods to start work on a new Princes Bridge as the old stone bridge did not have a sufficiently large arch to accomodate flood waters from the Yarra River. In flooding, the old bridge acted as a dam causing great dam upstream, including to the boat sheds. 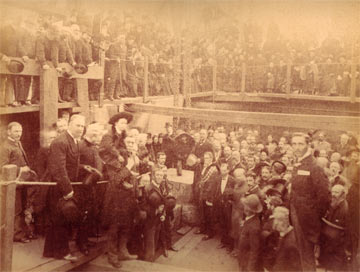 The Geelong Advertiser reported on the final as follows:

About 2000 persons assembled on the back of the Barwon river on Saturday afternoon, to witness the final heat of the annual rowing contest of the public schools.

At the start the Geelong crew shot away in capital style and gained about a length and a ¼, when the visitors, by a quick and vigorous effort, lessened the distance by about a length, the boats continuing on those terms till opposite the Albion Woollen Mills, when the Geelong crew commenced to gradually draw ahead and increase their lead, until nearing the Barwon rowing club’s boat house, when the stretcher of Mann, the stroke of the Geelong crew, gave way and considerably militated against the success of their efforts, and the Melbourne boys again appeared as if they would come into close quarters.  There was a marked contrast between the working of the two crews, the members of the GGS displaying a powerfulness and elasticity of stroke without a too apparent display of exertion, whilst those of the Melbourne bent to their work and seemed to put forth their utmost energy.  On clearing the bridge, however, despite the mishap, the Geelong still maintained a lead of about a length, which gradually increased until reaching the winning post, when they had a good length and a half to spare.  Time was 8 min 30 ½ sec.

The Geelong Advertiser reported the heats as follows:

This annual event was commenced yesterday after on the river Barwon

The crews got away on even terms, and after a spirited race of 300 yards the MGS drew slightly ahead and led around the bend of the river at the foot of Pakington-street. An effort was made by the Scotch College to reduce the advantage gained by their opponents, which was almost a ¼ of a length. Both crews used every exertion, the College gradually lessening the distance, but the school appeared to row towards the opposing boat, and something, which looked like a foul, occurred, the bow oar in the College craft evidently losing the force of his stroke. However, the crews shaped a good course for the bridge, but the Grammar school crew, who exhibited the best condition, quickly drew in front and increased their lead at every stroke, passing the Albion Woollen Mills more than a length in advance of the College. This advantage was further added to between the Barwon bridge and the winning post, at the foot of Swanston-street, when the School won by over two lengths.

The Wesley crew lingered at the post after the signal to start had been given, whilst the Geelong Grammar dashed away with a strong lead. The winners were not asked to pull and rowed home with ease, winning by eight or nine lengths.

(This race was not conducted as part of the Head of the River regatta. It was conducted on Albert Park Lake on 22nd October 1886.)

The Argus reported on the race in the following terms -

Regarding the race itself there is little to record, the GGS running away from the start. The MGS rowed in good form, and with plenty of pluck, but at no time pushed the leaders, and the Scotch, although game from first to last, were slow and had to be content with third place.

Geelong won by 5 lengths, with a ¼ of a length separated MGS and Scotch.