The thirty-ninth Head of the River returned to the Barwon which was both in flood and impacted by strong winds. Wesley however went onto win for the sixth successive time from Scotch College in the final.

Geelong Grammar finished only one foot behind Scotch in the heat with Melbourne Grammar 2 lengths further back.

This was the year Xavier College joined the competition. In the centenary history of the Xavier Colleg Rowing Lift her home to Victory, lads, author Michael Lefebvre records that the inexperienced Xavier crew suffered sickness throughout training and the final crew only rowed together for the last two days before the race.

He goes on to describe the heat race where the crew were defeated by the eventual winning crew from Wesley.

Xavier got away badly and were a length behind after the first fifty yards. The crew then settled down to some good rowing but Wesley were too strong and after three quarters of a mile had increased their lead by another length. Despite the efforts of the Xavier stroke to lift his crew, they were unable to make uo any ground on Wesley and lost by two and a half lengths. 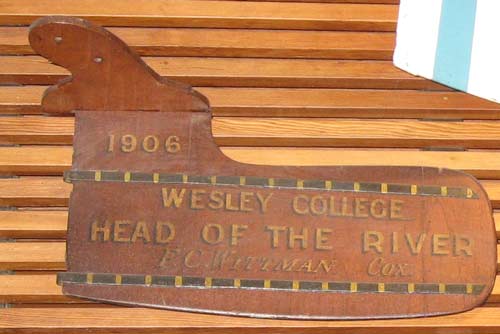 Wesley College rudder on display in the Wesley Boatshed

The Argus reported on the final in the following manner:

The weather was again extremely boisterous on Saturday afternoon, yet a very large number of ladies and gentlemen assembled on the banks of the Barwon River to witness the final heat for the public schools' boat race. The competing crews were the respective winners of the preliminary heats roved on the preceding day, viz;, Wesley and Melbourne Scotch College. The Wesley crew, was was coached by Mr. C. Donald, and showed splendid form on Friday, was fancied by the majority of the people, but the strong south-westerly wind worked up such a roll on the river that .the race could not be regarded as a certainty for any crew. In such weather conditions there was always the possibility of a boat swamping or an oarsman catching a "crab." The race did not start until about half an hour after the appointed time. Each crew received an encouraging cheer as it pushed off from the staging at the boat sheds, but it was a hard and unpleasant row against the wind and the wavesup to the starting point. The staging of the Geelong College boat shed in that locality was availed of by both crews to empty the water which their boats had shipped in the row up the stream, and at about 4.30 o'clock Captain H. Speed sent the two boats away with a running start on level terms.

Wesley had the centre station, and the Melbourne Scotch was on the north side, where there was least protection. For about 15 strokes there was not much difference between the boats, but then the Scotch floundered and Wesley shot to the front, and at Pakington-street had a lead of half a length. At the Albion mills Wesley was three-quarters of a length ahead, and passing under the Barwon-bridge that advantage had been increased to a length and a half. The Scotch then made a spirt, and at the Geelong Grammar School shed had cut down the lead of the Wesley crew to a little more than a bare length. The effort was, however, made too late, for Wesley again drew away, and won by a length and a half, although one of the winning crew caught a crab passing the judge's post

The annual eight-oared races between representatives of the Victorian -Public schools for the coveted honor of "head of the river" were commenced this afternoon on the Barwon regatta course. Usually the public has the advantage of being able to follow the boat races on this course from start to finish, but the Barwon has been subjected to heavy floods during the past mouth, and the southern bank along which the vehicles travel was on Friday in a sludgy condition as a result. This was very disappointing to the immense crowd of spectators that came to Geelong by special train and other means to view the race. Some drags and other conveyances followed the race from opposite the Albion mills to the finish, and spectators mounted on horse back got through from end to end. The weather, too, was very boisterous and showery, and the strong wind from the westward worked up a roll on the river that interfered at times with the passage of the boats, but it also helped them along when the crews were fairly seated. Captain H. Speed officiated as starter, Mayor Bostock and Mr. A. Ritchie as umpires, and Mr. D. Aitken as judge.

The Geelong Grammar School crew, on the north station, led by about a canvas at the minute stump from Melbourne Scotch College, which occupied the middle station. Geelong maintained that advantage to Pakington-street. but steered wide afterwards and lost slightly at the Albion Woollen Mill were neared. Approaching the Barwon-bridge, Geelong Grammar and Melbourne Scotch were on level terms and the Melbourne Grammar a length and a half in the rear. The Geelong crew shot under the bridge a foot to the good, but after that it was a ding dong race to the finish. The Scotch got in the last stroke, and amid great enthusiasm passed the winning post a foot ahead of the Geelong Grammar.

Wesley, on the centre station, took the lead from the start, and. although the Xavier crew rowed gamely for a first public appearance in an outrigger, the Wesley eight was too powerful, and, with a longer and slower stroke, it increased its lead to half a dozen lengths at the finish. Time, 5 min. 36 sec. 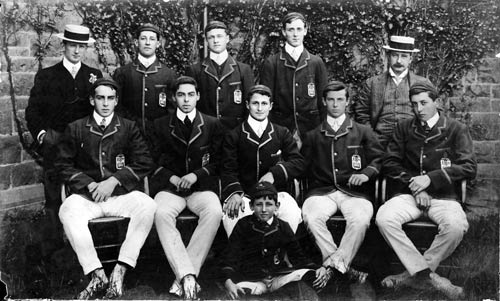 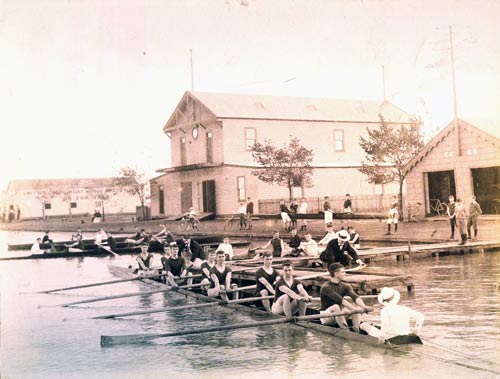 In 1906. The MGS boatshed to the right of this photo is at Albert Park Lake. The bigger boatshed in Albert Park Rowing Club. Please note the offset seating in the eight in the foreground. 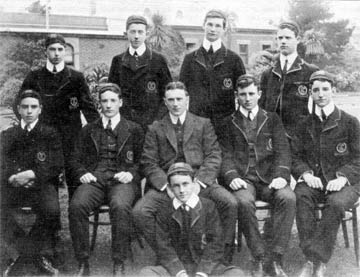 The correspondent of the Geelong Advertiser on Monday 15th October 1906 obviously recognised the importance of the regatta.

The Public Schools Boat Race just concluded on the Barwon is entitled to more than a passing word of comment. In the first place, it is the oldest race in Australia, having beeen rowed consecutively since 1868. In 1901 the contest, which had previously been confined to fours, was conducted in eights, and the interest of the public was proportionately increased.

It is the greatest school boat race in the world, for in this contest only do five school eights meet. The Ladies' Plate at Henley is a race open to both Schools and Colleges, and it is only a chance if Eton, the greatest rowing school in the world, meets Radley in one of the heats.

Looking at the contest from a rowing point of view, Wesley College may he congratulated on their hard won honors. They were the neatest and the cleanest crew engaged, and their victory was well deserved. Scotch College rowed two excellent races, and are quite entitled to the second place. Melbourne and Geelong Grammar Schools were both unfortunate in training, and St. Xaviers were new to the river, but all three schools may be satisfied with the determined way in which their representatives rowed it out in the historic contest.

The mere athletic interest, however, of the meeting pales in comparison with the moral discipline involved in the preparation and actual conduct of the race. The self-restraint, the subordination of the individual to the crew, the complete authority, the ready obedience, the spirit of absolute fair play and the resolution to "fight to the death," are all part and parcel of the qualities fostered in such athletic sport. They tend to produce men who will transfer to the shire, the city or the State the patriotism which they have learned at school. We are the last to place athletic before moral or intellectual training, but we recognise most willingly the educative side of such a race as that recently decided on our water.