The sixty-seventh Head of the River was conducted on the Upper Yarra course on 17th and 18th May. Geelong Grammar had a remarkable finish being behind approaching the Henley staging and then winning by two lengths.

The Xavier coach Marcus Burke made some significant last minute changes to his crew and took the stroke and seven seat from the seconds and put them into the firsts. It did not have the required effect with Xavier being soundly beaten in the heat by the eventual winning crew from Geelong Grammar.

The junior regatta included fifth crews for the first time. 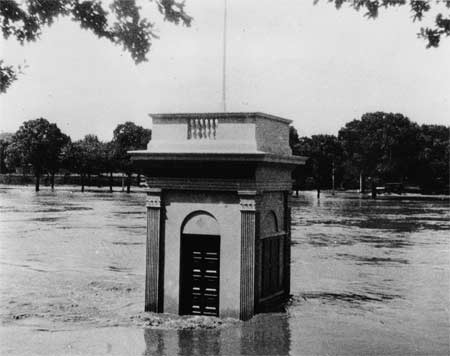 November 1934 floods - the Judges Box on the Upper Yarra

As the many Barwon floods had done to the Geelong schools, the 1934 floods caused much grief to the Melbourne schools. It was not as bad as the 1891 floods but it was bad. Both Scotch and Xavier lost their boat sheds with all their boats. Scotch College rebuilt their shed with a bull nosed reinforced concrete shed which could withstand any flood and probably worse. It is as strong today as the day it was built and will take a lot of work to demolish. 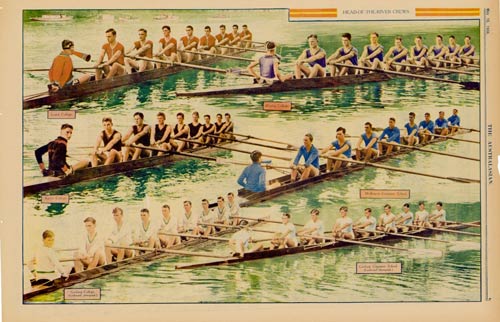 The stations for the final were:
North - GGS
Centre - MGS
South - WC.

All crews got away well but WC tried to gwt too much advantage from the first bend and hit the bank taking any advantage out of it. MGS got the early lead by Morell Bridge (then Monier Bridge), but GGS start an excellent push levelling up with MGS. With the advantage of the bend, GGS then took the lead. Over the last half mile, GGS drew away from MGS who mage valiant efforts to catch them. Despite the margins, it was reported that the race was still in doubt unitil 200 yards to go.

The Age reported this way:

Geelong Grammar had the north station, MGS the centre, and Wesley College the south, and the crews had no difficulty in lining up. They were sent off to an excellent start, in which all went off cleanly. Wesley and Geelong Grammar each rowed 11 strokes in the first ¼ minute, and MGS one stroke fewer. MGS quickly began to forge ahead, and, as in their race with Xavier, Geelong Grammar dropped back, being again slow to get moving. Half-way to the bridge MGS were a ¼ of a length ahead of Wesley, who were ahead of Geelong. The Wesley crew kept a little too close to the south bank and the oars on stroke side seemed to touch the mud. MGS were still moving ahead and reached the bridge with the handy lead of half a length, whilst Wesley were a ¼ of a length ahead of Geelong. At this stage the north crew usually moves up, but Geelong were making no impression. Their stroke, however, was maintaining his length and waiting his time to make the run. MGS continued to moved ahead, and Wesley dropped back. Coming to the first disc MGS had secured a lead of a length, which looked a winning advantage at this stage of the race, as Geelong had still failed to improve their position. Wesley and Geelong passed under the first line of discs together. Geelong now began to make its effort and Wesley dropped back quickly, being nearly three lengths behind Melbourne Grammar. At the second discs Geelong Grammar were only half a length behind and moving up fast. MGS, however, put on every ounce and held the light blues off, maintaining the half-length advantage after the boats came into the straight. At Brander’s the struggle was intense. MGS had only a ¼ of a length. The dark blues, however, were now visibly showing the effects of their grueling, whilst Geelong Grammar maintained their form, even recovery and hard drive. Although the fight was a hard one, it was now seen that Geelong would prevail in the final effort. Slowly they crept up, but the crews were almost half way along the Henley staging before the Geelong boat showed in front. This was the end of the race, as MGS could withstand the strain no longer and quickly dropped behind, whilst Wesley were fast drawing on them. The Geelong boys finished vigorously to win by two lengths. 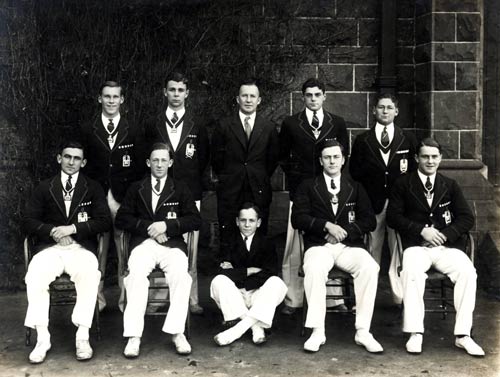 The Argus reported in this manner:

Both crews went off at a very high rating of 44. Xavier was the first to gain the advantage and half-way to the bridge was a ¼ of a length in front. Geelong Grammar then began to draw up and was only a canvas behind as the crews raced under the bridge. The Geelong crew drew level at the drain. Both crews were then striking about 36. Passing under the first disc the Geelong crew, which was making full use of the legs, began to draw further away, and at the second disc was nearly a length in front. Entering the straight the light blue crew had a length and a half lead. Xavier made a gallant effort, but the Geelong crew, rowing well, drew farther away and was two lengths ahead at Brander’s, having the race in hand. At the Henley staging the leading crew further increased its advantage and won comfortably by three lengths. Time: 5 min 18 2-5th sec.

Wesley went off at 42, and Scotch at 40. Scotch was the first to gain the lead, and half-way to the bridge was half a length in front. The lead was increased to ¾ of a length at the bridge. Wesley, rowing with great dash, then began to draw up and there was only a canvas difference at the first disc. Half-way to the next disc Wesley drew level and was 3 feet in front at the no. 2 disc. Coming into the straight, Wesley was half a length in front and was striking 38 to Scotch’s 36. In a great race to Brander’s, Wesley led by half a length, which was increased to ¾ of a length at the staging. Scotch then challenged, but Wesley was not to be bustled and held its advantage. In the last 150 yards Wesley spurted and drew away to win by a length. Time: 5 min 28 4-5th sec.

Going off together, MGS struck 35 to Geelong College’s 34. MGS gained the lead after the first few strokes and half-way to the bridge was a good half length in front. This was increased to a length at the bridge. Both crews at this stage were rowing 32. At the second disc Grammar had increased its lead to two lengths. The race was then all over, as the heavier combination making full use of its strength, continued to go away. Rowing well Grammar passed the post with three and a half lengths to spare. Time: 5 min 34 1-5th sec.

All crews got away well but MGS with a higher rate of striking, moved away early to a 1/2 length lead with XC in second place. MGS never lost the lead and were reported to be one of the best seconds ever seen on the river. Xavier was unable to catch MGS but moved away from WC and SC.

The report from The Argus was MGS first by 2 lengths to Xavier with ½ a length back to Wesley, Scotch last. Time: 2 min 43 sec. 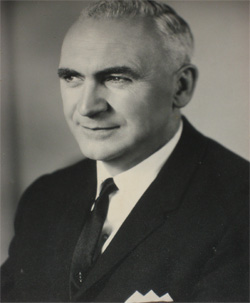 Alan commence coaching the Wesley second and third crew in 1934. He continued coaching these crews from 1934 to 1945. He coached the Wesley first crews from 1946 to 1979. He was the master in charge of rowing from 1935 to 1974. The social rowers of Wesley College row as the Alan Mitchell Club. 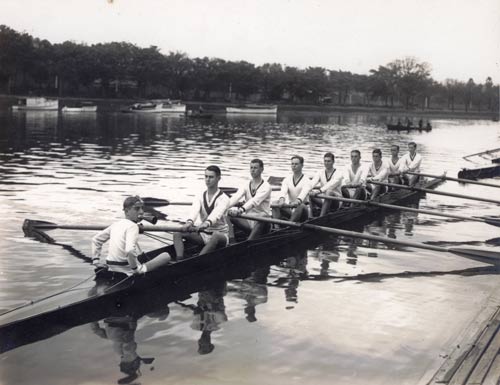 SC had the best of the start taking an early lead. WC challenged and then passed SC. WC kept the race in their safe hands and were never beaten. MGS and SC then had a great duel for second place which resulted in a dead heat.

(This race was conducted at the Junior Eights Regatta prior to the Head of the River on 11th May on the Upper Yarra. It was raced amongst the Melbourne metropolitan schools.)

This was the most exciting race of the day with all three crews within feet of each other. WC had the best of the start taking a small early lead. However all crews raced together to the line in a thrilling struggle. 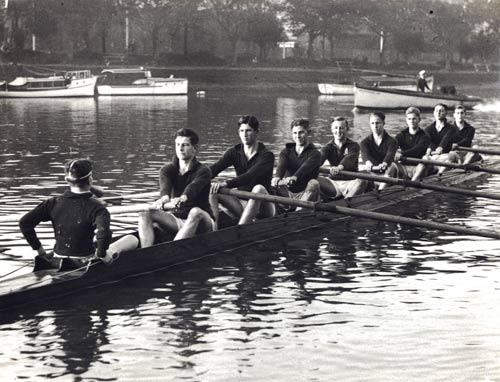 Photo courtesy of Arthur Atkins, stroke of the Scotch crew

(This race was conducted at the Junior Eights Regatta prior to the Head of the River on 11th May on the Upper Yarra. It was raced amongst the Melbourne metropolitan schools.)

This was the first time that a fifth crew raced at the junior regatta. Melbourne Grammar took charge early led all the way to a comfortable victory.

Melbourne Grammar sixth and seventh crews raced together in another race in which the sevenths were given a length start.

Sevenths won by a ¼ of a length.