These Championships were conducted on the Lake Barrington course for the first time and were a great success. The weather and facilities were appreciated even though it was well into winter being on 19th May 1984.

Melbourne once again won the Centenary Cup for the most successful university at the regatta.

Another attraction for this regatta was the attendance of two Japanese Universities Waseda University and Keio University. They raced a challenge race which was narrowly won by Waseda.

The finish of the men's eight

Photo from Australian Rowing Volume 7 No.2 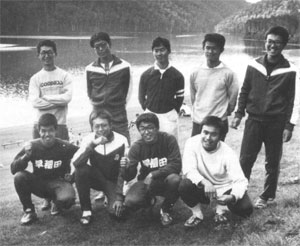