The Melbourne crew won well on their home course over 3 miles from the South Australians with Sydney last. The race was conducted 4th June 1904.

Of note, the Adelaide crew contained Collier R Cudmore (later knighted) from Adelaide competed for England in the coxless four which won. He was competing in the Magdalen College crew from Oxford University where he was studying. He therefore was Australia's most successful sweep rower at the Olympic Games until gold was again won 1992. Upon his return to Australia, he was a prominent member of the Adelaide Rowing Club.

Melbourne got away well were never troubled, winning by nearly 4 lengths. Marcus Bell was originally selected in the crew but withdrew due to an injury in favour of Gordon Shaw. A great race for second place with the two remaining crews never a length apart. Sydney finished q quarter of a length in front of Adelaide. 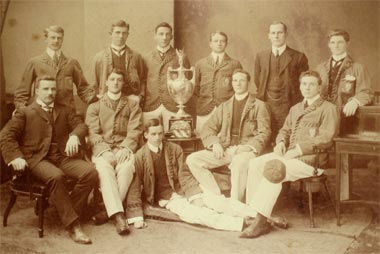