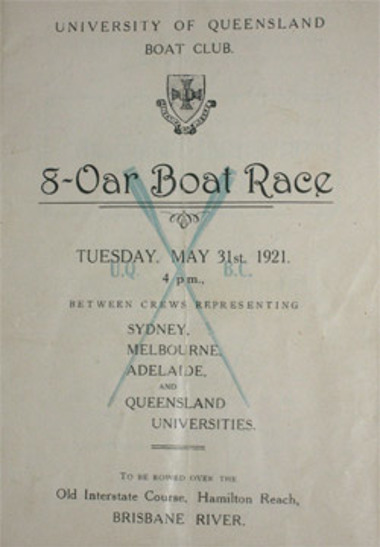 The race was conducted on 31st May 1921 on the Hamilton Reach of the Brisbane River for the first time. It was a three mile race. The University of Queensland had made their first appearance at this regatta in the previous year.

The University of Queensland performed with distinction in their first attempt, very nearly taking the honours.

VARSITY EIGHT-OAR RACE.
WON BY MELBOURNE
QUEENSLAND A CLOSE SECOND.
The inter-Varsity eight-oar race was rowed yesterday afternoon on the Hamilton Reach, in pleasant weather conditions, although the sky was at times overcast, and the day was somewhat close and warm for the end of May. In addition to speed boats carrying officials, the steamer Beaver had been chartered to enable friends of the contestants to follow the race, and a considerable number of persons took advantage of the fine view afforded from the Hamilton-road to see the contest. The finish being off the rocks near Toombul Wharf and made that vantage ground a popular centre.

For the first time since the interstate University contests were held in 1888, Queensland was selected as the convincing place, and the rowing enthusiasts of Brisbane gave evidence of their interest by lining the Hamilton-road in motor cars, as well as crowding the Beaver. Among the visitors on the flagship were Archbishop Donaldson, Canon de Witt Batty, Mr. A. J. Thynne, M.L.C. (chairman of the Queensland University Senate), and Mr. E.B. Cullen (Harbours and Rivers Department).

Starting 40 minutes after the advertised time (4 o'clock) on the top of high water, the stream was practically motionless for the greater part of the journey. The crews struck the water, simultaneously, at a remarkably unanimous rating of nine strokes for the first quarter minute, Melbourne and Adelaide afterwards slowing down to 28.30. With a slightly faster Stroke than the others the Queensland crew was the first to nose in front. The mile pole was passed with all the crews rowing magnificently, but Sydney was getting more to the rear Over the second mile the struggle between Queensland and Melbourne crews was desperate. The crews rowing at 30 each bent to the oars blade to blade, and both Sydney and Adelaide were being relentlessly distanced.
Every ounce was on the Queensland oars, and the question uppermost in every ones mind was would the boys last out the journey. With a mile to go a westerly wind buffered the contestants, but both the leading crews maintained then combination Adelaide and Sydney were dropping further astern. With about half a mile to go the Queensland enthusiasts on the Beaver were dismayed to see the local crew's coxswain take the port side of a moored dredge. It was away from the direct line, and Melbourne profited. A final burst by the visitors stroke (Buchanan) could not be answered by Queensland and the honour was just at the last moment snatched from their grasp with half a length separating the boats. Adelaide was 10 lengths behind third and the Sydneysiders were tailed off four lengths further away. The time was 17min. 25 secs.

(The Australian Dictionary of Biography notes that Lorimer Dods was appointed MVO in 1947 and he was knighted in 1962. He received an honorary doctorate of science from the University of Sydney in 1974 and was further honoured when the title of Lorimer Dods Professor was conferred on the director of the Children’s Medical Research Foundation. At university he had been a rowing Blue and had excelled at skiing. In 1968 he listed his interests as gardening, surfing and antiques. Well read, he enjoyed making literary allusions in his medical writings. He was a warm and charming man whose wisdom and knowledge continued to pervade paediatrics through the many who were influenced by his teaching and his example.) 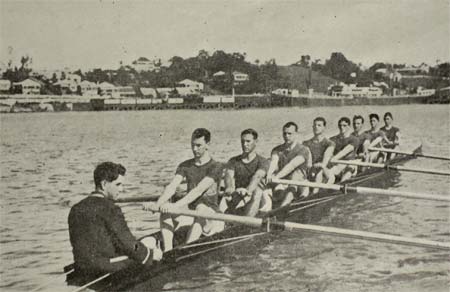