John Lang in the Victorian Oarsman published in 1919 reported on this race as follows:

The revival of boat racing contests between the Universities was due to a suggestion made by Dr. W. Fleming Hopkins, a member of the Melbourne University Boat Club. Dr. Hopkins was deputed by Mr. C. H. Freeman (Hon. Secretary of the M.U.B.C.) to speak to the Adelaide University rowing men on the subject of sending Melbourne a challenge to row a race.

This challenge for a race in eight-oar boats on the Yarra was received from Adelaide University by Melbourne University rowing men, bearing date 27th January, 1888. Sydney University Boat Club was approached, and decided also to send a crew. The first eight-oar race was rowed on the Yarra on 6th October, 1888, and resulted in a win for Melbourne, Adelaide being second and Sydney third.

The two and a half mile course was used. Reports indicated that Adelaide University club was not strong. "In consequence of fewness of members and certain disappointments, the club has not been able to have an emergency man in training.": The Argus 29 Sept 1888.

An interesting but unrelated race took place one month later than this University Championship, namely the first Intercolonial Great Public Schools Race on 5th November 1888. The race was between Geelong Grammar School from Victoria who defeated St Ignatius College from Sydney on the Barwon River Geelong. 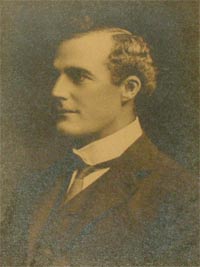 Photograph courtesy of the State Library of South Australia (SLSA: B24294)

The following account of the race is from "The Adverstiser" 8th October 1888 and as reproduced in the 1975 Championships programme.

This afternoon on the lower Yarra River was inaugurated the annual eight-oared race between the Universities of the Colonies. The event bids fair in time to rival in importance the historical Oxford and Cambridge University boatrace in England.

The contest of Saturday was between the 'Varsity oarsmen of Adelaide, Sydney and Melbourne. The weather was excellent and the water was well suited for lightweight eight-oared crafts. The starting point was fixed at the lower end of the hunting reach and the finish was opposite No.3 Customs shed above the Gasworks.

The Umpire was Mr. E. Carlisle, the starter Mr. T.H. Young, and a few of the principal supporters of the three crews were taken on board the launch Commissioner by Captain Fullarton, and the Albatross was packed with those desirous of seeing the race start.

It was arranged for 3-15, but it was fully half an hour after this before the crews were dispatched. The Sydney crew appeared at the start with commendable punctuality, and were compelled to wait until their opponents put in an appearance, it is not likely that the result of the race was influenced by the Sydney men being kept at the post so long, but it is hoped that in future such treatment to the visiting crews may be avoided.

Cheers were given at each of the crews as they proceeded to take up their positions at the starting post, Sydney on the north, Adelaide in the centre, and Melbourne on the south. The stake boats were not evenly moored, and Mr. Young had some difficulty in getting the crews in a line to a good start.

However, the men were sent off. Melbourne was the first to show ahead, rowing a well-timed 40 strokes a minute with good length and power. Their boat traveled at a splendid pace, and they quickly had a length to the good. Adelaide came next, also stroking 40, and Sydney a few feet behind rowing 39.

At the end of the quarter mile the Melbourne crew had slowed down to 38, and were two lengths ahead of Adelaide and rowing up to their best practice form. The steering of the Adelaide crew up to this point had been faulty, due to some extent to a side wind. The Sydney crew did not allow their boat to travel between strokes, and they gradually dropped behind at the junction of Goode's Canal and the reach.

The Melbourne team led by three lengths from Adelaide, who were two lengths clear of the Sydney men for a few strokes. At this point the Melbourne men rowed short, but they quickly recovered themselves and resumed their long swing. They steered rather wide to the finish, but they were well ahead and could afford to lose a few feet.

The Adelaide team kept up a vigorous 38 stroke, but could not draw upon the leaders, and the Sydney crew were pulling pluckily but onsteadily in the rear. As the crews reached the basin opposite the gasworks, the Melbourne team were five lengths ahead of the Adelaides, who were fully that distance ahead of the Sydney men.

In crossing the Basin No.7 in the Sydney crew broke the blade of his oar, and had to row the rest of his journey under difficulties.

The positions of the boats were not changed to the finish, which was reached by the Melbourne crew in 13 mins. 4 secs. from the start. There was quite a crowd of boats on the river, and the wharves were well lined with interested spectators. As soon as the steamers came up the winners and losers were heartily cheered.

The Melbourne men were not at all distressed, and the Adelaide and Sydney teams showed that their training had been thorough. It is unquestionable that the race was won by the Melbourne men by superior skill in rowing with the exception referred to. Mr. McCulloch, their stroke, to whom much praise is due, kept a long, even and telling stroke which could be easily followed.

The Adelaide crew were disappointing, as it was thought that their superior strength would help them considerably. They rowed, too, in good time, but with a rapid recovery that checked the run of their boat. The Sydney crew pulled with gameness, but were outmatched.

In the evening the visiting crews were entertained at a banquet at Paree's Crystal Cafe. Professor A.B. Allen, President of the Melbourne University Boat Club, presided the chair and proposed the toasts of the visiting crews, which were responded to by Messrs R.W. Hawker and C.R. Cox for Adelaide, and by Messrs Hollie and Wilkin for Sydney.

The following are the names and weights of the crews –