The Championships were conducted on a 3 mile cousre on the Huon River on 30th May 1951 with all six universities competing. For the first time ever, a dead heat for first placing occurred. The conditions were noted as fast.

The Mercury in Hobart reported:

Sydney then staged its amazing burst of speed. Rating 40, and getting punch from a terrific leg drive, the crew literally shot ahead. Even with a few yards left Melbourne headed Sydney by the narrowest of margins, but the crews crossed the line locked together. Queensland finished fourth, with South Australia and Tasmania finishing in that order.

Rowing authorities classed the race as one of the greatest ever seen in the Commonwealth. It was the first dead-heat registered since the inauguration of the championship 63 years ago.The Oxford and Cambridge crewshave dead-heated only once in the English classic.The chairman of the Tasmanian . Rowing Council (Mr. J. R. Berkery), who judged, said the finish was the best he had ever seen. It was absolutely impossible to separate the crews. 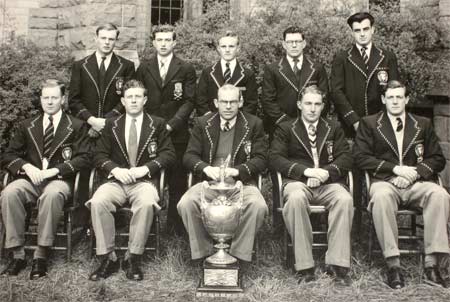