Melbourne won well on the 3 mile Parramatta River course from Sydney then Adelaide on 9th June 1906. For reasons not known, it was recorded as having been raced over slightly less than 3 miles from Uhrs Point (just east of Ryde railway bridge) to One Man Wharf (Abbotsford Point).

This was to be the last year as stroke of the Melbourne crew for H J Whiting who had stroked the crew for the past 6 years. He was victorious on three occasions. He was also the Honorary Secretary of the Victorian Rowing Association at the same time.

N J Hargrave, who had coxed the Adelaide crew for the past two years, raced in the bow seat this year. He was a large cox at 9st 8lb in 1905 and a small oarsman at 10st in this competition. 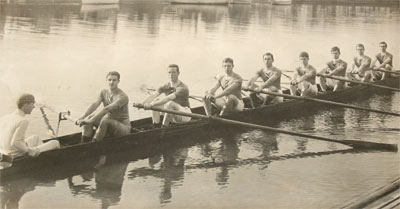