Raced Saturday, May 9 1896 on the Parramatta River.

The 1896 edition of the Greater Public Schools Regatta of NSW was on the same 1 mile 550 yard course between the same two crews: 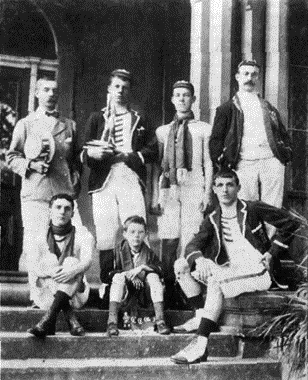 The day was met with favourable racing conditions of cool weather and flat water. Many people watched the racing from several steamboats: The Lady Manning, Birkenhead and Dawn steamboats. Church of England got the early lead and moved away as the race developed, being eventual winners by 1 ½ lengths.
The Sydney Mail and New South Wales Advertiser provided the following report on Sydney Church of England’s retaining the Major Rennie Cup:
The water was very smooth, with a light wind blowing up stream. The first race was started from the point known for many years as One Man Wharf, but it is several years since any wharf existed. There were but two crews prepared to compete for the Schools' Championship, Sydney Church of England Grammar, the holders of the Major Bennie Cup, and the challengers, Sydney Grammar School. Both crews were exceptionally heavy, and showed good form, but very distinct in style. The Church crew was rather stiff in the body work, but did good blade work. The other crew went in for a great amount of body swing, and were not very clever on the recovery. Mr. King F. Giltinan had some trouble in getting the crews well into line, owing to a great measure to the awkward set of the tide. The Church boat was best away, and before the other crew was fairly going had a half-length to the good, rowing about 38 per minute.

Before 200 yards had been covered Sydney felt the sweeping tide, and quickly recovered lost ground, rowing a slashing stroke of 40 per minute. Passing Gladesville wharf Sydney was leading a length, and going well. Meanwhile Church boat was putting in much cleaner work, and the stroke was showing commendable coolness, as if relying on his rivals losing form and pace.

In the next quarter mile Sydney began to labour badly, and the swing, which had been even and solid, now became far from satisfactory. The crisis was at hand, for No. 3 in Sydney lost hold of his oar, crabbed slightly, and became very distressed. The Church crew seized the opportunity, spurted brilliantly, and all was over. Passing Tennyson, which is nearly a mile from the start, the boats were separated by two lengths. Hearing the finish at Putney Point Sydney livened up a little, but was quite out of decent shape, and could not hold the leaders.

The winning crew rowed well, and never lost form, which, added to the coolness of the stroke, secured a well-earned victory. Sydney had a real good man for stroke, and the crew was by no means a bad one, but No. 3 must have been very short of condition. He rowed like a champion while he lasted, and should become a good oar.

Shore was again successful this year but with a far tighter margin. Grammar led early but a strong surge by Shore in the second half of the race over powered them.

Shore: A history of Sydney Church of England Grammar School by Geoffrey Sherington