The 1965 GPS Head of the River was conducted on April 10th 1965 on the Milton Reach of the Brisbane River.

Below are excerpts from The Telegraph and The Courier-Mail written in the lead up to the regatta.
“Three Crews In Favour for Race

Expert opinion seems to be hardening that the crew to win the Head of the River wil come from one of three crews of the six that will line up for the 2000 metre rowing classic on the Milton Reach at 3 o’clock tomorrow.

The three crews are BBC State High and Brisbane Grammar with BBC having very slight edge in predictions. Of the others Gregory Terrace are favoured over CEGS and Southport to run into a place. Veteran coach Mr Dave Magoffin has his heavyweight BBC crew who average 12st 5lbs at the peak of racing condition. They will row from lane 2 between State High and CEGS. Always first to show out at the starts they could be hard to overhaul this time. Yesterday both Southport and State High wound up their hard training by doing a full-pressure row over the course in the lanes that they will start from on Saturday. Timing this final tryout to coincide with similar tidal conditions as will prevail during the race, both crews performed to the expectations of their coaches.

Clavill Bere is particularly please with the way Southport have adjusted to the local water conditions having done the bulk of their previous preparation on the Nerang River. State High’s satisfactory course followed a 1000 metre race they did the previous evening against the Queensland Kings’ Cup crew.

High held the Seniors in the start and had only conceded half a length at the 1000-metre mark. Gregory Terrace who won two eights races on the one program a month ago are the crew who could cause an upset. The beginning of the Head of the River course near the William Jolly Bridge and the finish near the Toowong Ferry will be patrolled by the water police to prevent any undue traffic moving on to the regatta area.

Private boat owners in position before the first race at 1.30 p.m. will be permitted to moor against the south bank opposite the Toowong Ferry.

Normal no-parking rules will operate along Coronation Drive. The road will not be closed to vehicle unless the volume of traffic becomes unduly heavy and there is risk to the public. Main vantage for viewing the finish is the area on the river bank between BBC and Toowong club houses. Davies Park provides a good position to view the eights at approximately the half-way mark and to see the start of most of the fours races.”

Brisbane Grammar School would be the crew to beat in this year’s Head of the River on Milton Reach at 3 p.m. on Saturday.

Veteran “Head” coach Clavell Bere, coach of The Southport School eight, said this last night after watching Grammar workout. Grammar, coached by John Ireland, will be out to repeat their win in last year’s “Head.” Bere said: “We have drawn the extreme south bank lane six and we could have hoped for more than to have the Grammar eight in lane five.

“They are a classy crew and will be the hardest to beat. If our boys can hold Grammar then I think we can win.” Bere who crew arrived in Brisbane on Tuesday for finishing off training over the actual “Head” course was pleased with his crew after its first course trial yesterday. State High eight, under King’s Cup oarsman, Denis Donnelly as coach have been impressive in workouts this week. Donnelly himself in training with the composite crew which he hopes to contest the King’s Cup in Perth next month is given a big chance of coaching State High to its first win in an eight oared Head of the River.”

Conditions will play a big part in deciding the winner of the Head of the River on the Milton Reach at 3 p.m. today.

The weather Bureau has forecast winds reaching 15 knots this afternoon on the Brisbane River. Rowing experts agreed last night that conditions would favour crews which had drawn the southern bank were boats would be sheltered from the wind. Most favourably drawn would be the Southport crew which will start from the No. 6 lane. This is the lane from which Brisbane Grammar won the event under similar conditions last year. The Southport eight is the lightest in the race averaging 11st 4lbs. In the nine river “classics” contested in eights lane six has provided the winner on four occasions. The powerful B.G.S. crew have drawn No. 5. Lane which will give them some shelter over the 2000 metres course.

Chances of early favourites, State High, may have slumped somewhat in the expected weather conditions. Form their No 1 lane, State High will have to face the full brunt of the wind and any sudden squall would be to their distinct disadvantage. The Heavyweight B.B.C. crew, which averages 12st 6lb may also find No. 2. Lane a handicap. Churchie coach, Earl Fry, said last night that he had no worries about the fitness of his crew which averages 11st 7lb. With a “medium” draw in No. 3. Lane, Churchie cannot be written off for the title which they last won in 1963. One of the “suprises” of the race could be Gregory Terrace from No. 4 Lane.

The offices in charge of the metropolitan traffic district (Inspector Crank) said yesterday that cars would not be allowed to park along Coronation Drive during the afternoon. Special would be assigned for duty there he said. Racing will start at 1.30 p.m. with the fourth fours over 750-metres. 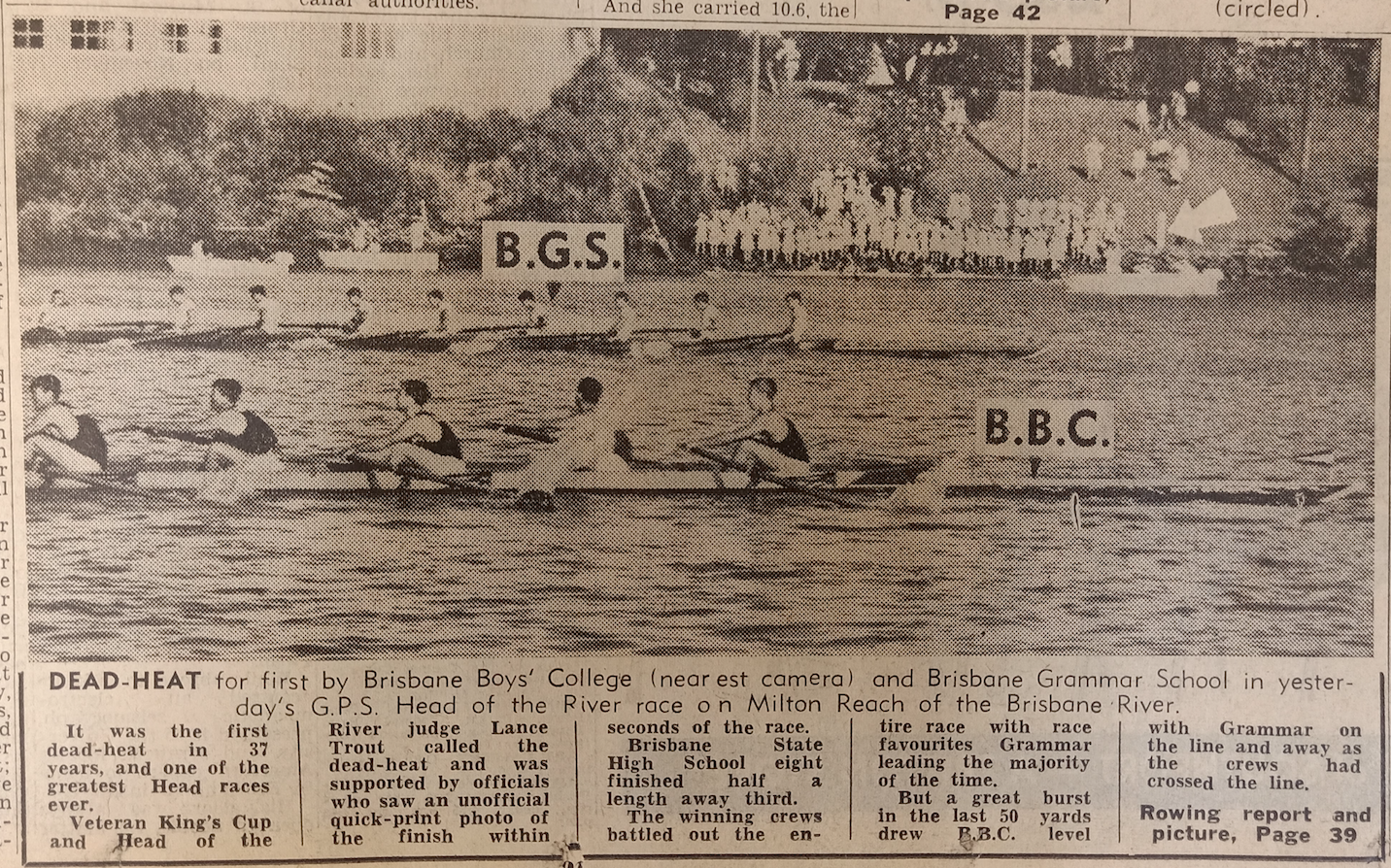 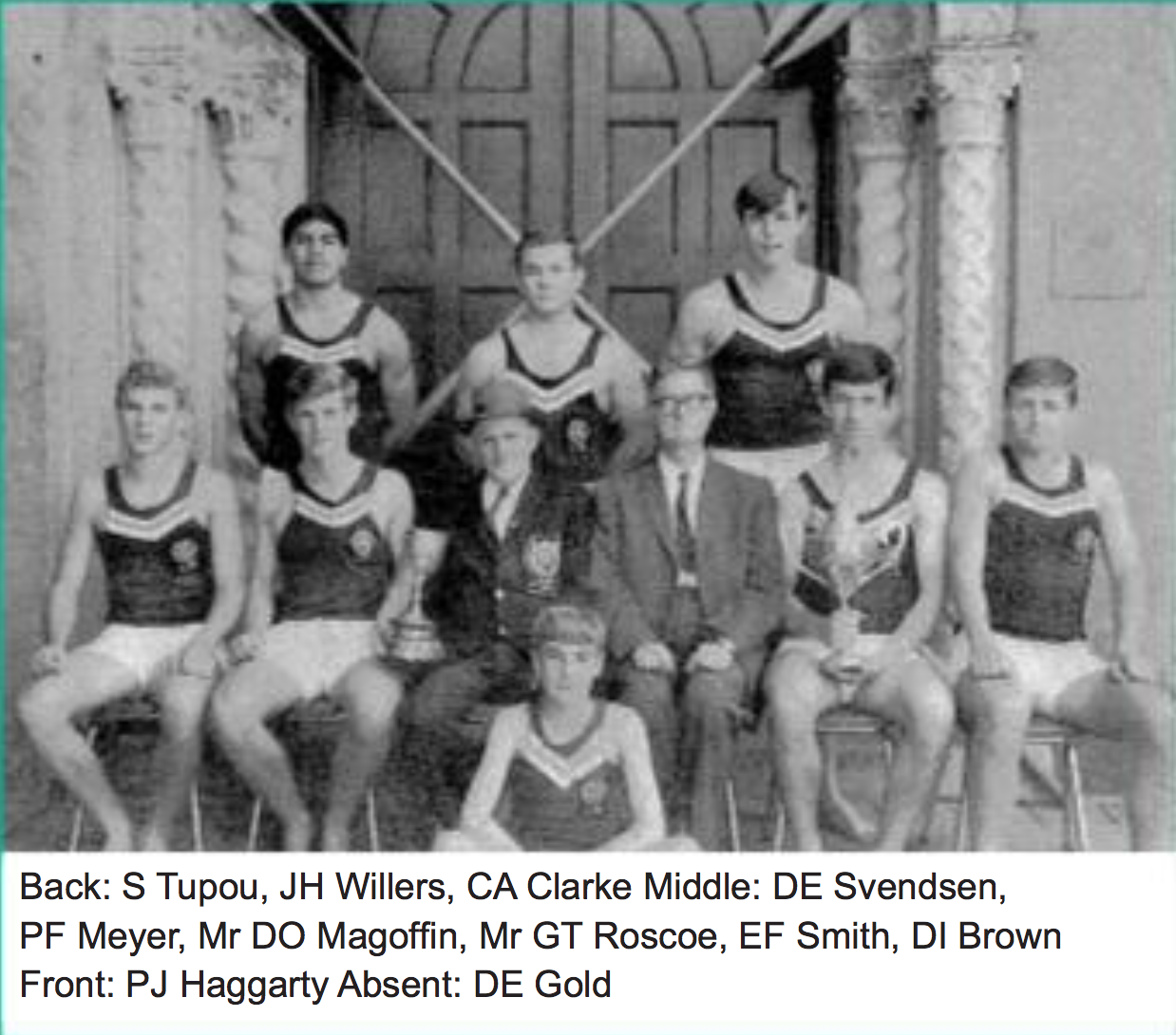 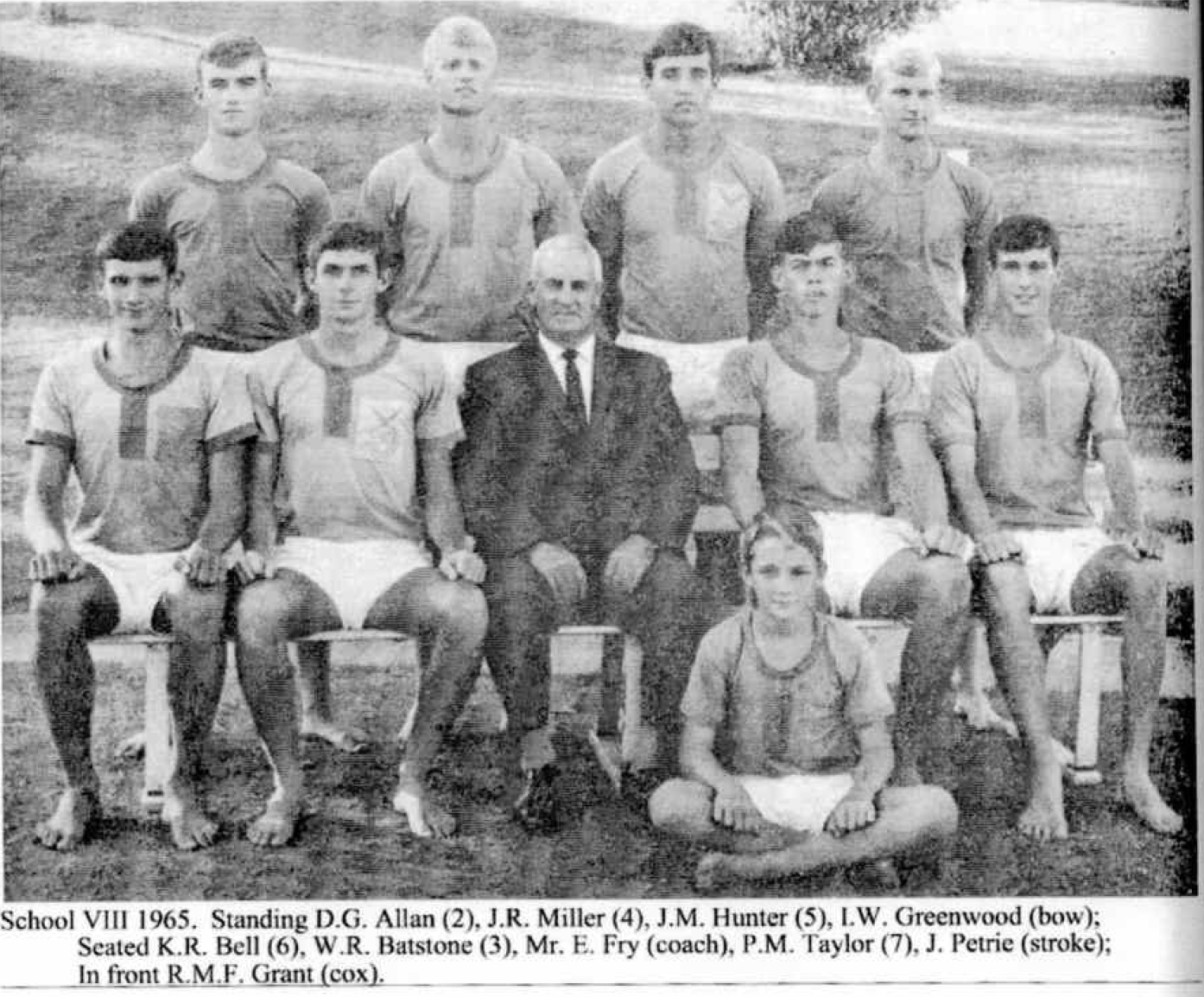 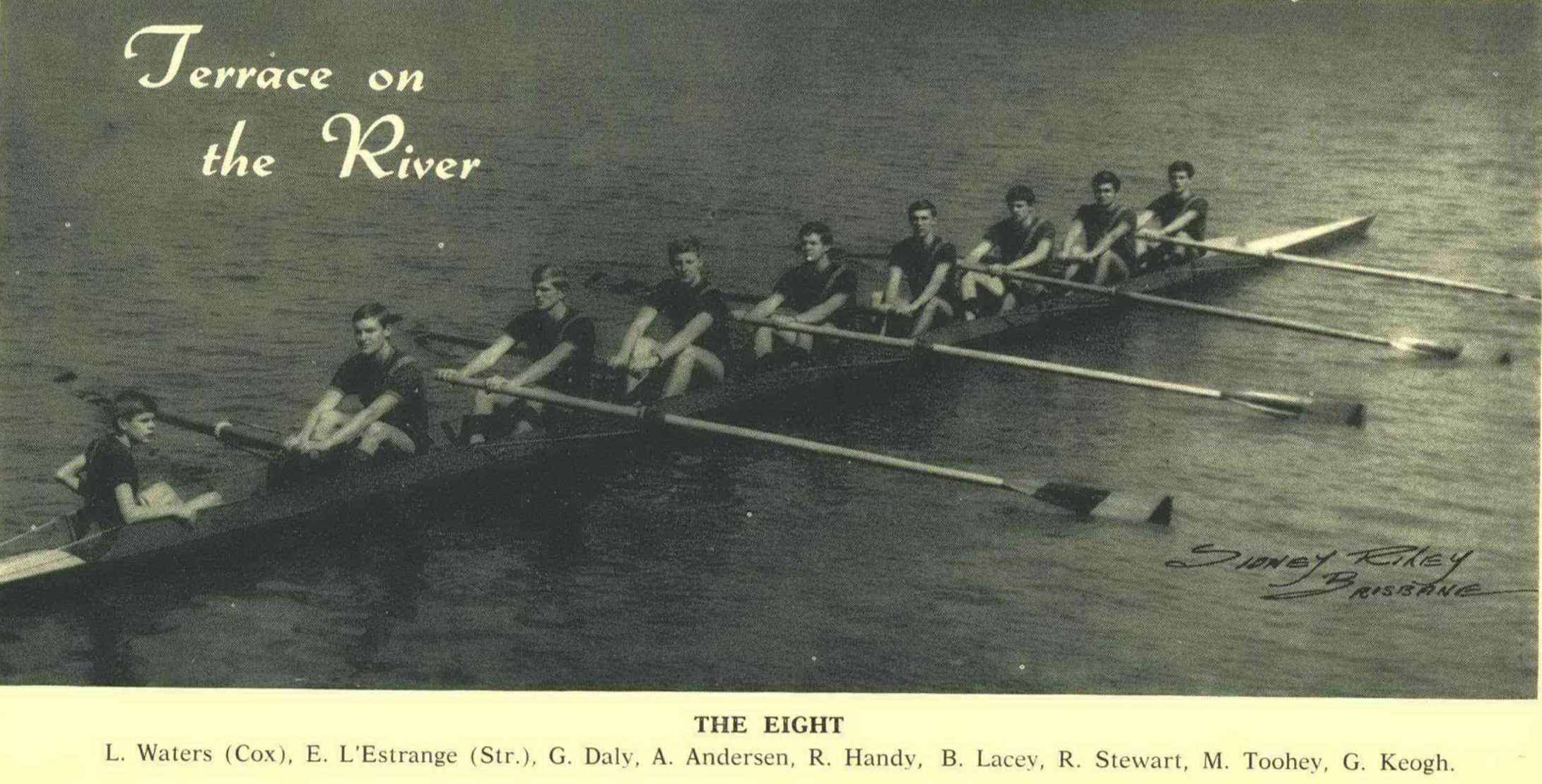 The No. 6 and 7 seat in the 1965 Gregory Terrace First VIII, A. Anderson & G. Daly respectively, represented Queensland in the King's Cup in 1966

R. Batsone, the three seat in the 1965 Church of England Grammar School First VIII was the 1965 Recipient of the Sylvia Dixon Prize Cup awarded to the Churchie sportsman who most demonstrates leadership and skill whilst representing the school in sport that year.

Hal Boardman 1970 (sergeant & Burton) Hal Boardman was a teacher at the school 1955-1966 and then Asistant to the Burser until 1975. He was Rowing Master 1956-1965 during which time he worked long hours for the boathouse in maintaining the fleet and in organising rowing training and competition. He was a retiring man who was often underestimated.

“In a gruelling finish, B.B.C. flew over the last 20 yards to catch the fast finishing Grammar, after Grammar had led from the start. I have little doubt that B.B.C. would have tossed Grammar had the finishing line been 20 yards further away. Veteran rowing judge Lance Trout called the dead-heat and was backed by rowing officials who studied an unofficial quick-print photograph of the finish within seconds of the race.

It was the first dead-heat in a Head since 1928 and the only tie ever in an eight-oared Head. (The Head title was switched from four-oared craft to eights in 1955.)

Fancied, Brisbane State High School rowed into third place, only half-a-lengths behind the winners. Half-a-length away, fourth was the Gregory terrace eight, with a further half length to Churchie, fifth, and only a short distance to the last crew, the Southport School.

Grammar looked set to retain the title they won last year within 200 yards of the line when they put on a great burst to clear immediate opposition from B.B.C.

But with less than 100 yards to go B.B.C. replied with an even greater finishing burst. With only seconds remaining to the line, B.B.C. knifed the water to draw level at the finish. As the racings shells crossed the line B.B.C. appeared to edge past Grammar.

Veteran B.B.C. coach Dave Magoffin, who has been behind B.B.C. rowing for 21 years, said it was the best race he had seen. “I’m happy with the  result. The boys did everything I asked,” he said. Included in B.B.C.’s crew in No. 6 seat was Sontane Tupou, a grandson of Queen Salote of Tonga.

Grammar coach John Ireland said the race and the finish were the best he had ever seen.

But Ireland, who coached Grammar to the Head win last year at his first attempt, and backed it yesterday with the dead heat, had some unhappy news for Grammar supporters - he is unlikely to coach the crew next year because he intends taking full time studies at the Queensland University

In Hobart, the independent schools’ Head of the River was won by the Hutchins School for the second year in succession. They beat Launceston Grammar School by 1 ¼ lengths, with the Friends School another 1 ¾ lengths away third.”