The 17th Head of the River was conducted on Saturday 7th May 1938 on the Milton Reach of the Brisbane River.

Both races would be over a three-quarter mile course.

Brisbane Boys' College were correctly touted to defend their title. The Courier Mail reported that "despite the loss of two weeks training through accident, The Brisbane Boys' College Crew will start the 1938 Head of the River as equal favourites with Brisbane State High School who's combination with its high rating looks most likely to upset Clayfield."

The five competing crews would line up in the following order:

W. P. F. Morris, the headmaster of C.E.G.S. presented  the cup to the winning crew at the Commercial Rowing Club shed's later in the afternoon. 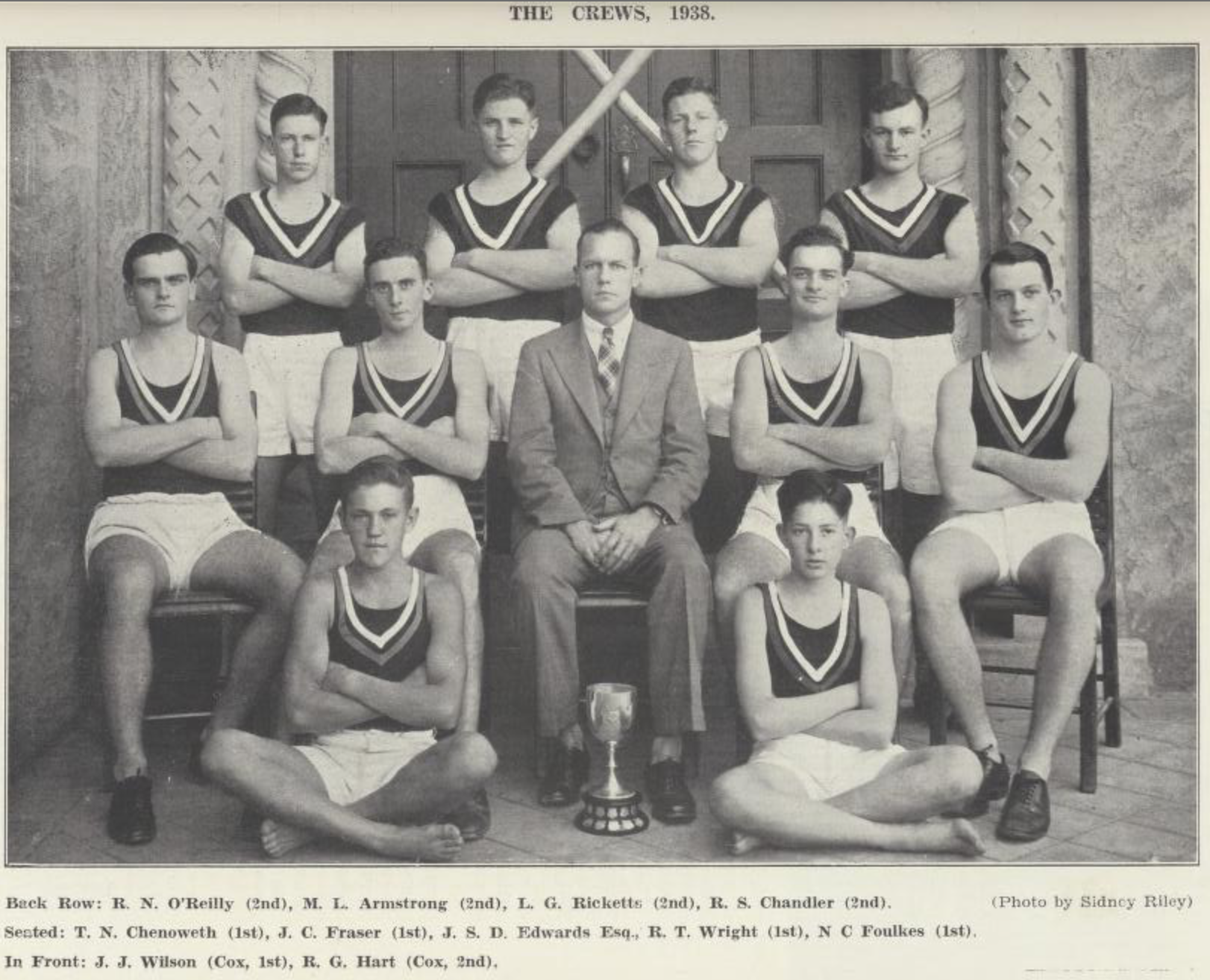 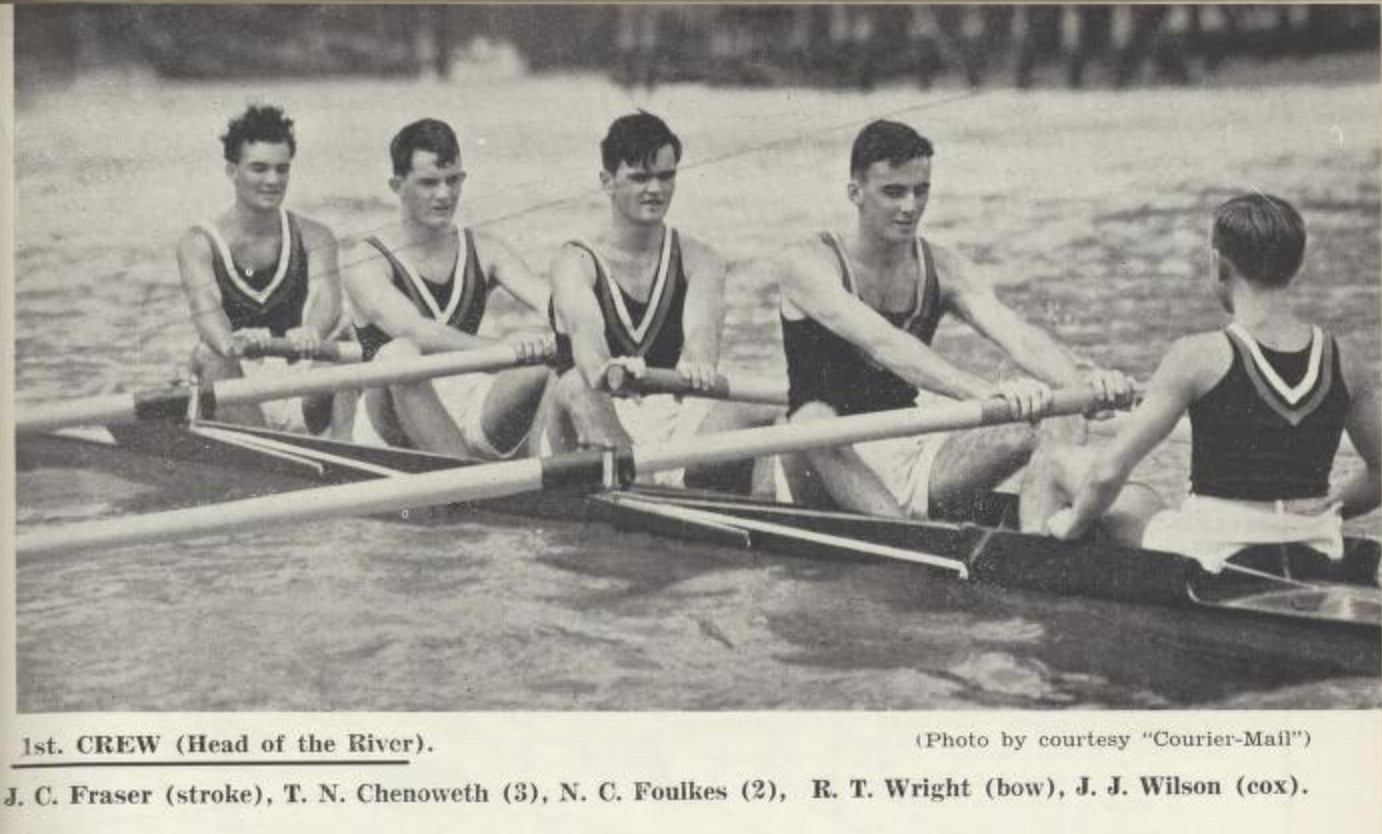 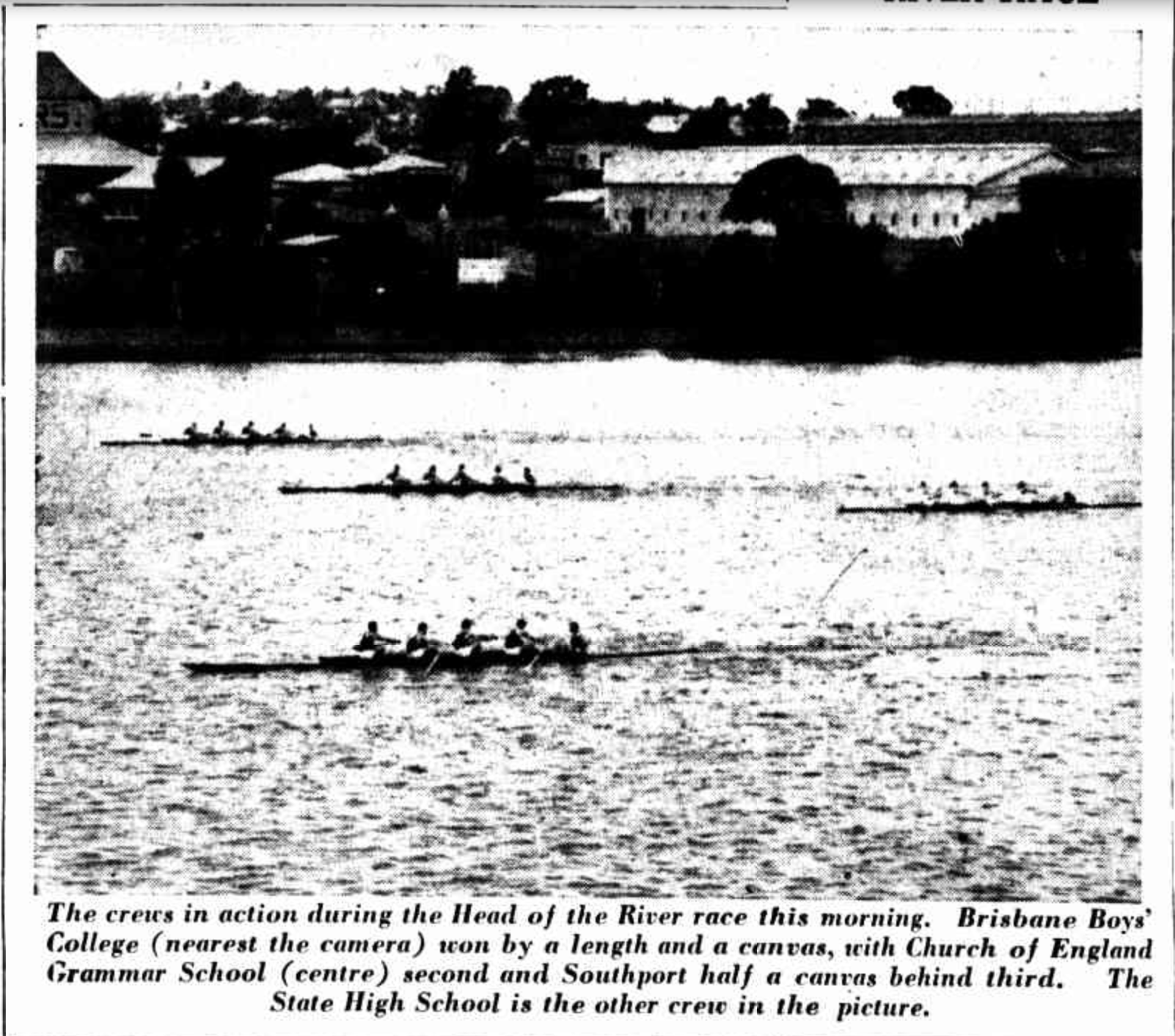 “All crews jumped away to a perfect start. After the first dozen strokes at a high rating B.B.C. was disputing the lead with Grammar, who gained a slight advantage in the first dozen strokes. B.B.C. continued to forge ahead, and with the other crews not slightly behind settled down to a steady 34. Rowing in perfect unison, College continued to pull away from the other crews but with about 200 yards to go, cox passed on the word that Churchy was beginning a final spurt.

Called upon for extra work, the crew put all they had into the finish to cross the line with a length and a quarter to spare from C.E.G.S. with Southport in third position. And so ended the Head of the River race for 1938, a feature of which was the apparent ease with which the college crew won, seemingly to have the race in their keeping after the first dozen stroke. Although comparatively light, their faultless style, stamina, courage and will to win carried them through. Congratulations crew! We are proud of you.”

“ The more experienced first crews gave little trouble at the start. B.B.C. rating about 36 went to the front in the first dozen strokes, and settled down into a long smooth swing which gave them plenty of run and took them away from their opponents with every stroke. At the quarter way B.B.C. led comfortably from C.E.G.S., which was moving well. Southport, Grammar and State High were together.

At the half-way mark, B.B.C, maintaining their good run, still held C.E.G.S by two lengths, Grammar and Southport were level at this stage, with State High trailing. Southport moved up well from this point to within half a length of C.E.G.S who were gaining slightly on B.B.C, although the leaders looked comfortable winners. In the last 100 yards Southport threw out a challenge to C.E.G.S and for a time it looked as if C.E.G.S would be displaced for second position. With a few yards to go C.E.G.S’s spurt removed all doubt. B.B.C. won comfortably by a length and a canvas to the good with C.E.G.S defeating Southport by half a canvas.” 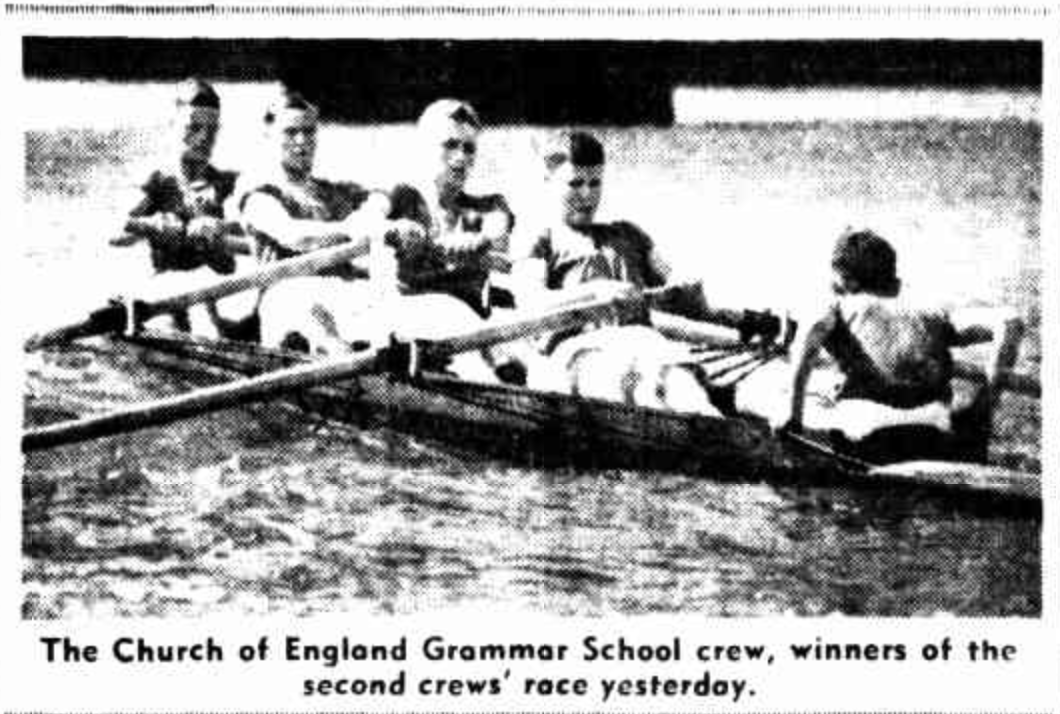 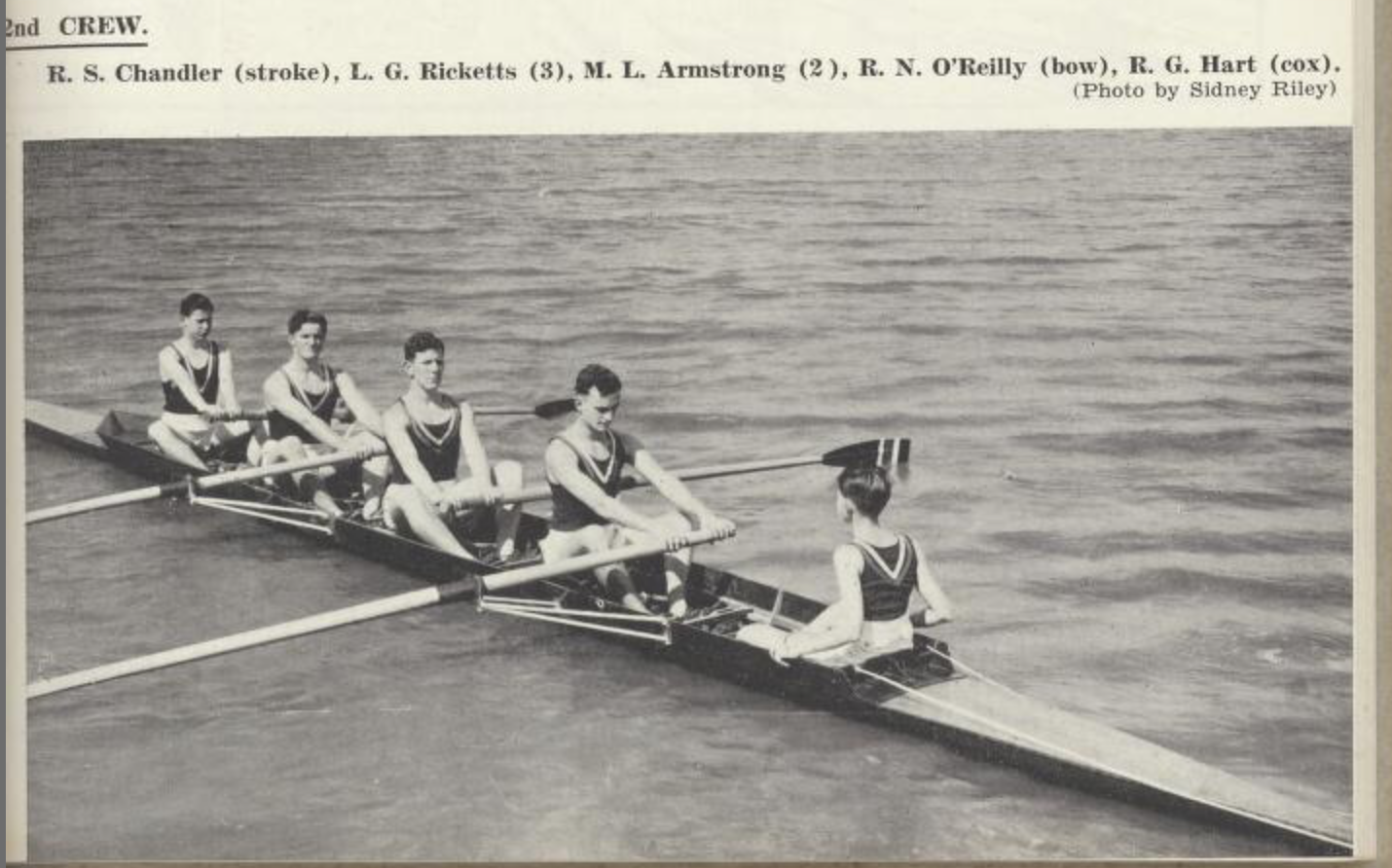 “The crews got away to an even start though B.B.C. appeared to splash badly for a few strokes before settling down. Grammar got the best of the start, closely followed by B.B.C. who had settled down at a lower rating and were slowly overhauling the leaders.

At the half-way mark B.B.C took the lead, followed by C.E.G.S., who had displaced B.G.S. in second position, and were rowing strongly, B.G.S., State High School and Southport. With the race nearly over, C.E.G.S. spurted and in a wonderful finish with both crews racing neck and neck defeated B.B.C. by half a canvas. Southport several lengths back, finished in third position.

We extend our heartiest congratulations to the Church of England Grammar School.”

“The race developed into a tussle between B.B.C and C.E.G.S after the half-way mark was passed, C.E.G.S playing the role of challenger and never letting up on the leaders. With 300 yards to go C.E.G.S spurted and drew level within B.B.C and the two crews fought out an exciting finish. C.E.G.S got the verdict by half a canvas. Southport, which had taken a keen part in the race early, finished third, a length and a half away.”