The 1946 Head of the River was conducted on Saturday 4th May 1946 on the Milton Reach of the Brisbane River.

This year's event on the Milton Reach was the first official Head of the River since 1941 with the regatta suspended due to World War II.

Rowing in a 'Thames Club style', the english rowing style of Brisbane Boys' College throughout the challenge regattas from 1942-1945 had enabled the College to virtually monopolise the competition. This trend would continue in 1946 with B.B.C. again winning all contests on the programme.

The Queensland Times credited Brisbane Boy's College's success to the school's policy of establishing a nursery of sorts whereby young rowers are placed in the fifth crew to be 'blooded' against senior competition whilst racing in the Thirds Crew contest.

A feeling relief no doubt punctuated the atmosphere of the Brisbane River during on the afternoon of Saturday 4th May 1946.

After a tragic war, the return of the official Head of the River in peace time had delivered a sense of normality back to the Brisbane school rowing community. It was noted that young people were seen celebrating long into night in the aftermath of the regatta. (Page 7, Sunday Mail, Sunday 5th May 1946) 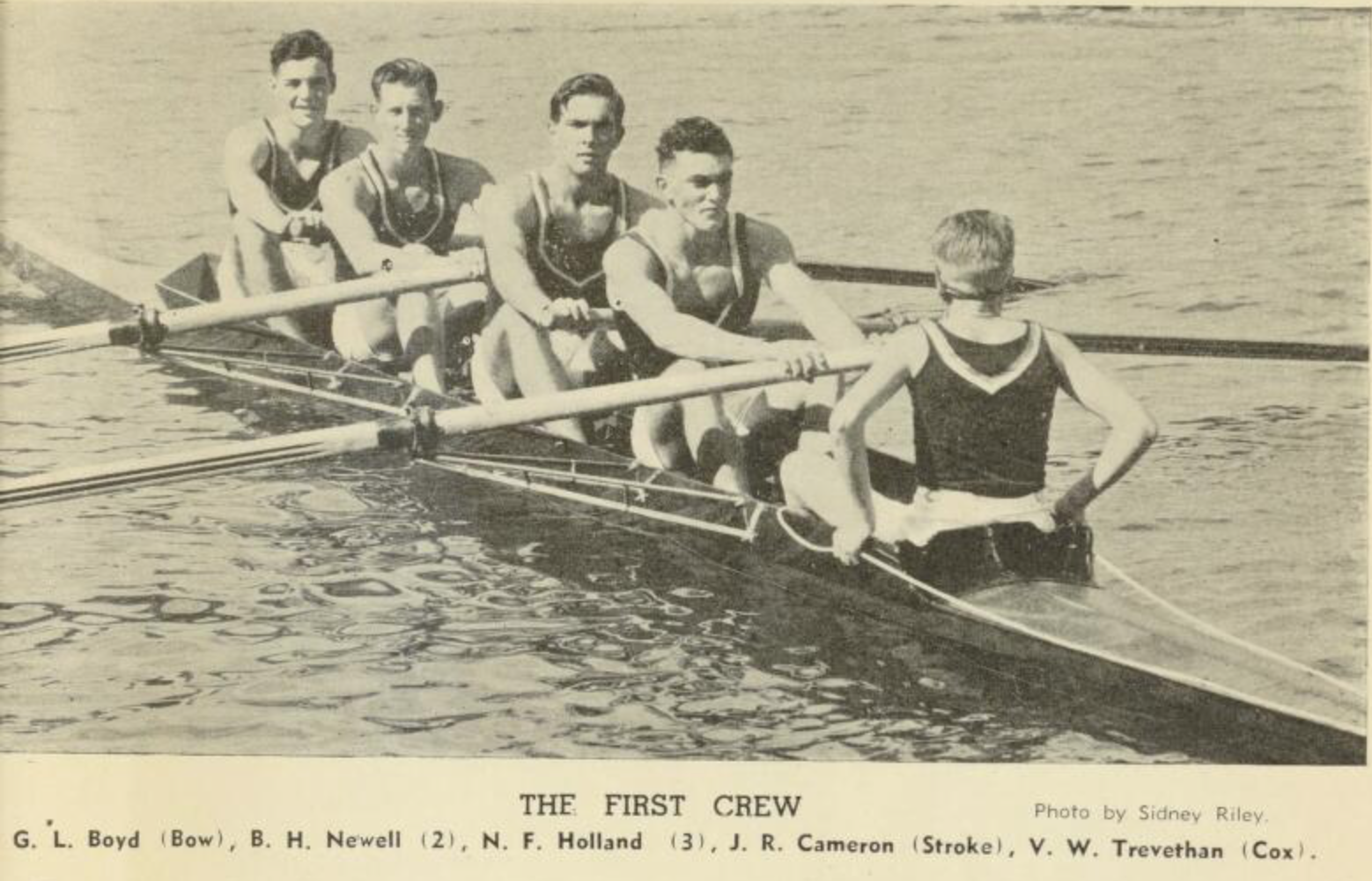 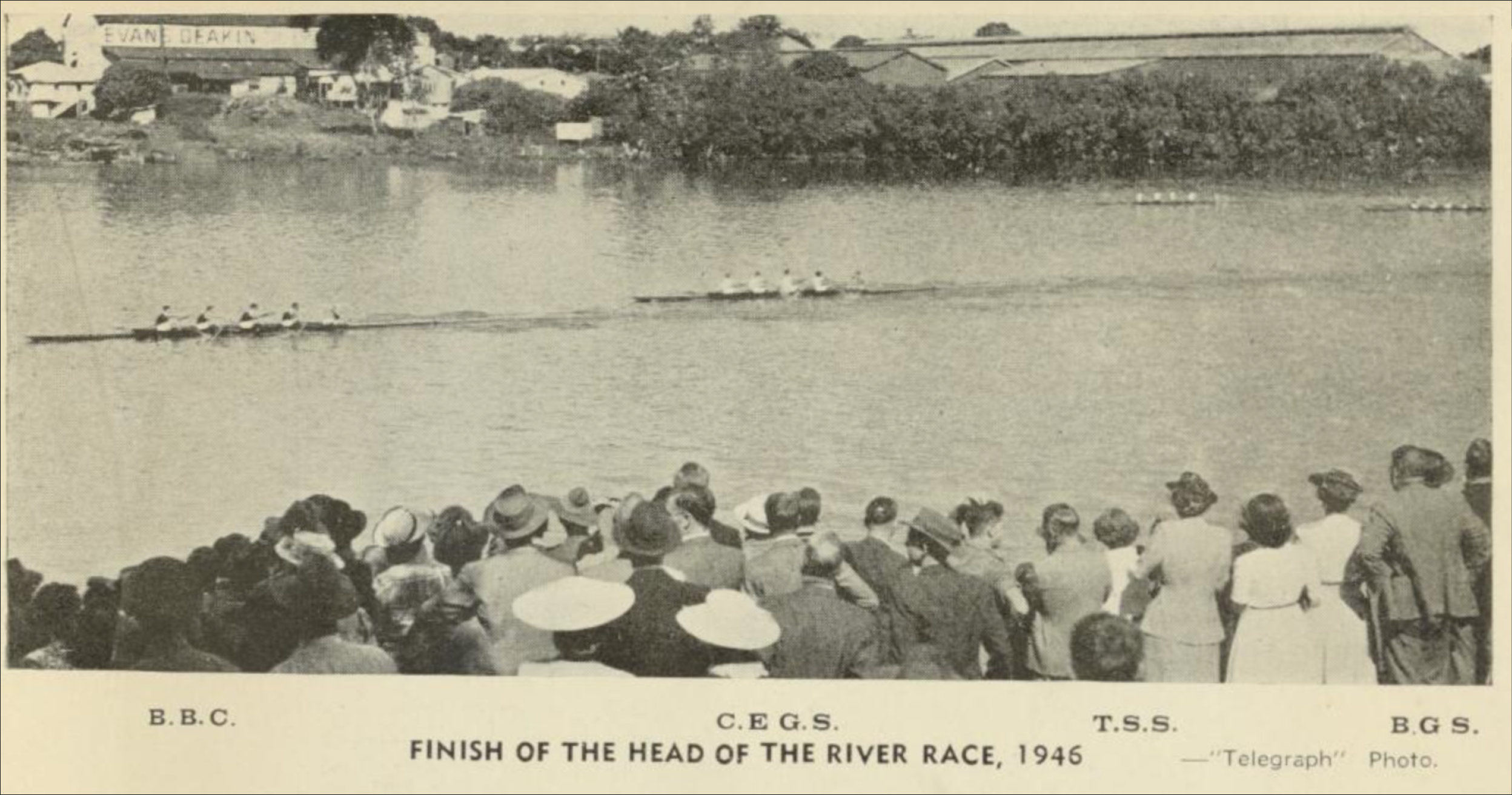 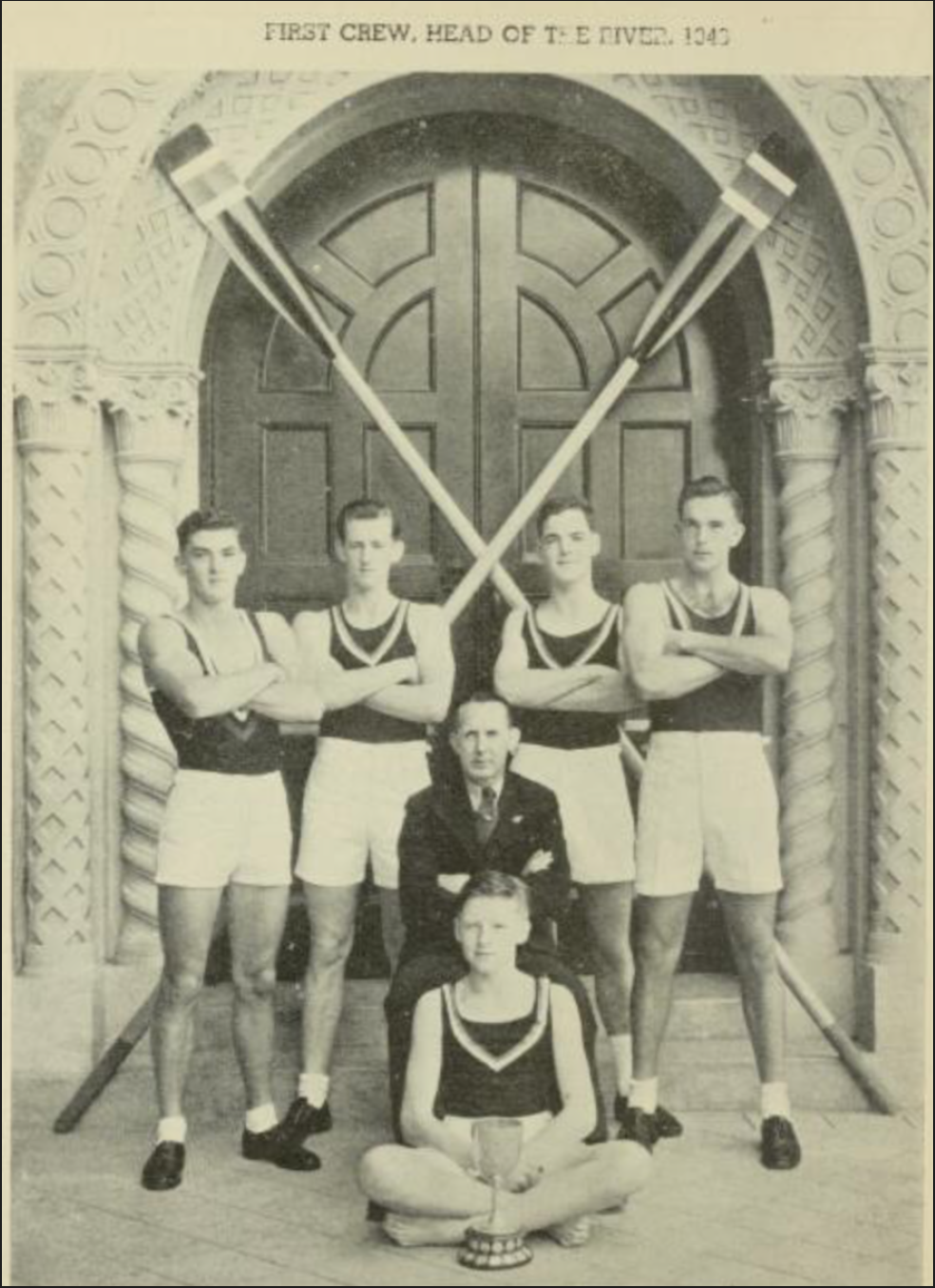 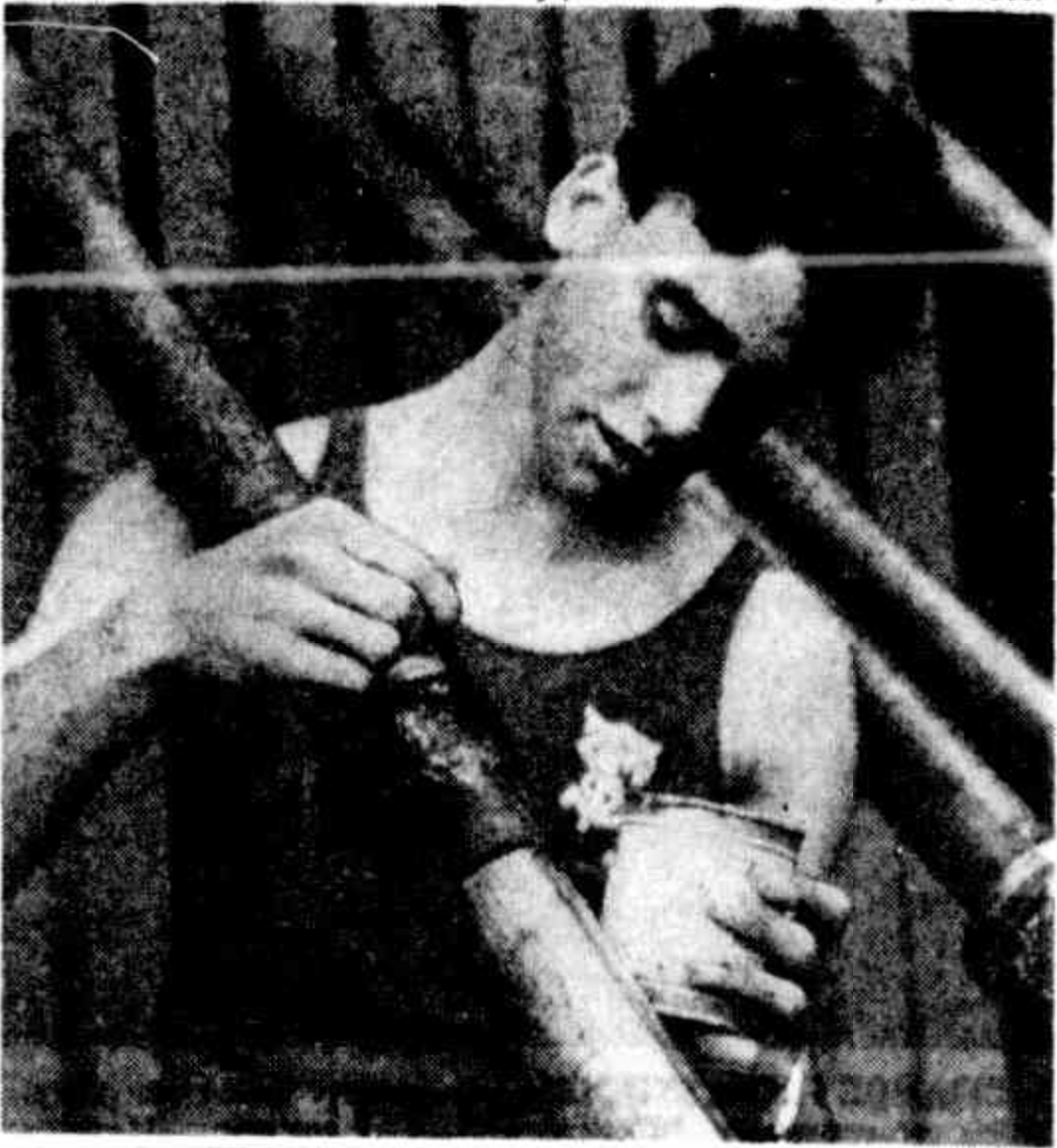 “ Dick Betts, stroke of the Southport crew, greasing his oars in preparation for the head of the river race to be rowed on the Milton reach on Saturday. It will be the first official head of the river held since 1941. All the members of Southport’s first crew have been promoted since last year’s race.” (Page 7, The Courier-Mail, 2 May 1946) 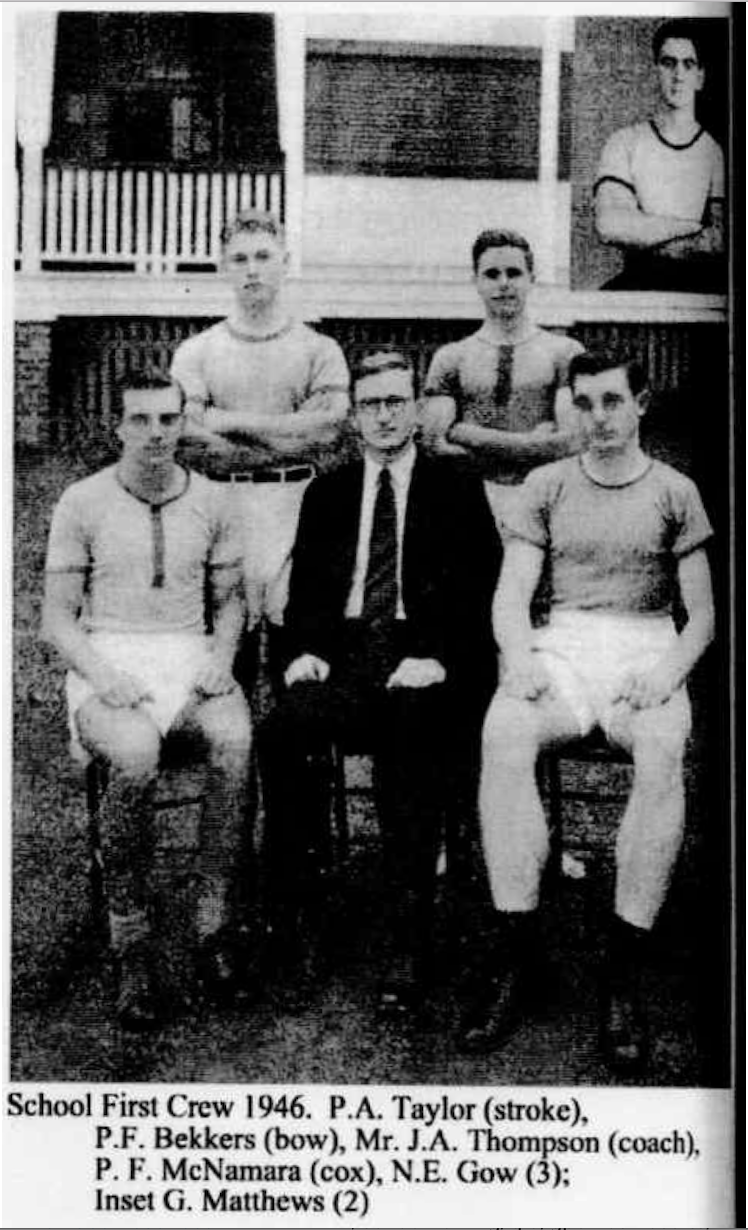 The Stroke of the 1946 Church of England Grammar School, P. A. Taylor, represented Queensland at the 1950 King's Cup.

In 1992, Anglican Church Grammar School commemorated their 1946 Head of the River Runner Up coach by naming a foar-oared racing boat in his honour. John Arthur Thompson attended Churchie from 1927 to 1931. He was a Prefect and Captain of Rowing and won an open scholarship to the University of Brisbane in 1931. He graduated in Science at the end of 1934 and completed honours in 1935. He joined the teaching staff at Churchie in 1936 and became immediately involved in the boatshed, having been a member of the Rowing Committee from that year. He coached the 2nd IV in 1937 and thereafter coached the 1st and 2nd and 3rds IVs until 1946 with a very high success rate (10 first places and 9 seconds among the 27 crews he coached). He teamed up with Max Mattingley to run the boathouse in a very successful era. He left in 1947 to become first Director of the Australian Institute for Archaeology in Melbourne. He completed his PhD at Cambridge University in 1963.

"The "Head of the River" was rowed on May 4, when a fine morning with a slight breeze made racing conditions excellent. B.B.C. took the lead with a fine start, rating 36. After the first dozen strokes, [B.B.C.] had an advantage of a canvas over C.E.G.S., who were rating 38, with Grammar and Southport next in that order.

At the quarter mile mark, the crew had settled down very well, and by driving hard [B.B.C.] lengthened the lead to a length, rating slightly lower than the C.E.G.S. crew, with Grammar in third position, having a slight advantage over Southport. At the half-mile, C.E.G.S. made a gallant effort to overtake us, but by more work, B.B.C. withstood the challenge: at this stage there was no decided change in the position of the other two crews.

As the crews approached the finishing line, B.B.C. had a lead of a little over a length from C.E.G.S., with Southport making a magnificent effort to overtake B.G.S. To the accompaniment of cheers from our supporters, B.B.C. passed the finishing line with a length and a quarter lead from C.E.G.S. Southport and Grammar were still battling it out for third position and crossed the line in a dead heat." 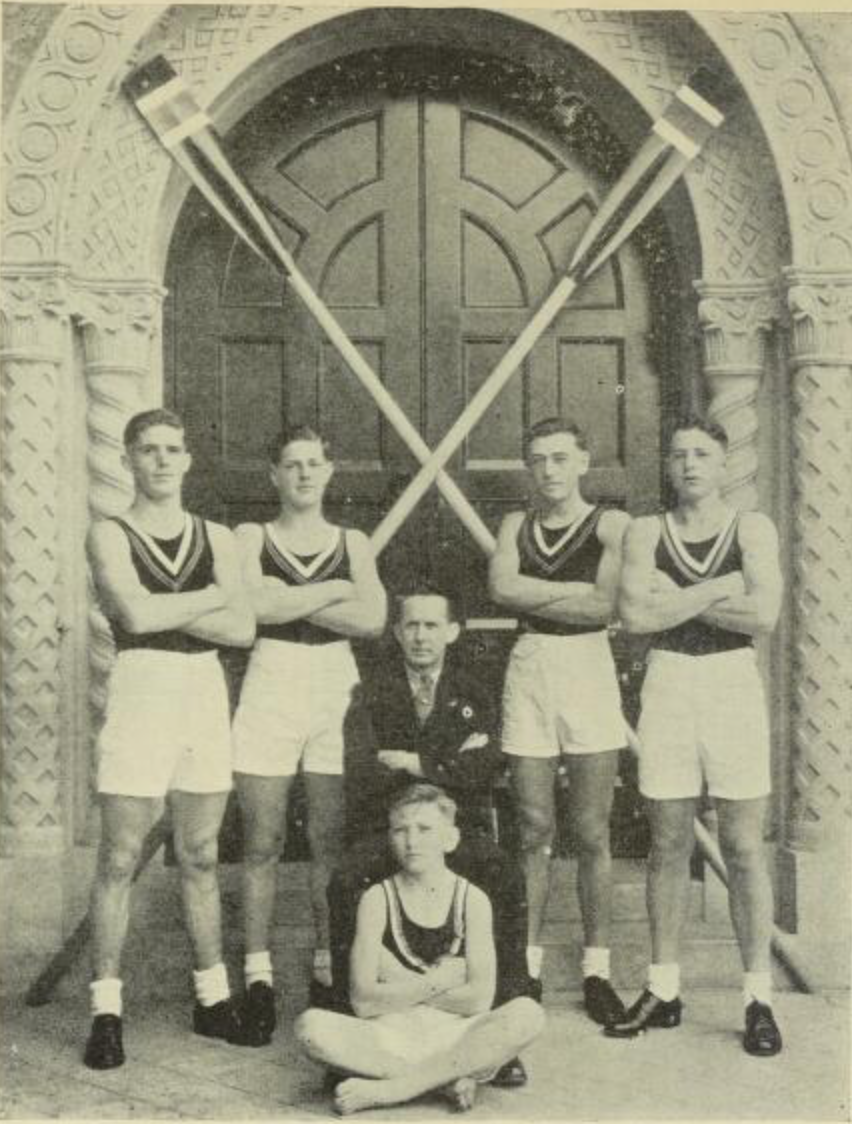 "Although all crews got away well, at the end of the "hard dozen," B.B.C. had something like half a length on C.E.G.S., who had a comfortable lead on B.G.S. and T.S.S. Rating about 30 and in perfect unison, B.B.C. increased this lead to a length at the half way mark.

Here the cox asked for a hard dozen and, as a result, B.B.C. gained yet another half length. C.E.G.S. answered with a hard dozen, but this, however, did not reduce the distance between them and B.B.C., while at this point B.G.S. and T.S.S. were some distance behind C.E.G.S. and were timing badly.

With about 200 yards to go, B.B.C. increased their rating to about 33 and began to draw away from C.E.G.S. who had lost their timing and were tiring. The B.B.C. crew crossed five lengths ahead of C.E.G.S with B.G.S. and T.S.S. third and fourth respectively."

"In this race three College crews were entered, their only rivals being two C.E.G.S. crews. B.B.C. III took the lead from the start closely followed by C.E.G.S. III. As a result of a "hard dozen," B.B.C. III increased their lead by two lengths from C.E.G.S. III, which they maintained for the next half mile.