The 1959 GPS Head of the River was conducted on Saturday 4th April 1959 on the Milton-Toowong Reach of the Brisbane River.

For a second straight year, The Southport First VIII claimed the O'Connor Cup and the Brisbane Newspapers in the week prior predicted that the 1959 contest was likely to be between Southport and Gregory Terrace. Below are some excerpts:

“Gregory Terrace is tipped to win its first “Head of the River” since the race began in 1918. Since the “Head” was switched to eight-oared crew in 1955, Terrace has been placed only once - second to Southport in last years “Head.” Each Terrace boy is in top physical condition, and should have confidence after the strong of wins in minor regattas this season. If Terrace win it will be a triumph for coach “Tiger” Flemin, who places top emphasis on the condition of his oarsman.

B.B.C. Coach (Dave Magoffin) has trained his crew on the lines of top Victorian Coach, Dr. Lloyd Williams  who coaches the victorious 1957 Victorian King’s Cup crew in Brisbane. The College crew has been on a diet of wheat germ, vitamins and other anti-cold nutrients.”

“The husky Southport crew, averaging 12st 8lbs, will again be the heaviest combination in the Head of the River Eights on the Milton Reach of the Brisbane River on Saturday. Ken Krimmer is the lightest oarsman in the Southport boat but his 11.6 dwarfs the 10.4 of Bob Savage, bowman for BBC, and 9.6 of Bruce Copley for State High. Southport, starting from No. 2 lane, will have full advantage of any incoming tide. Fast off the mark they should set an early lead much as they did last year when starting from No. 1.

Anthony Elliot had a run away win as stroke of the first Four last year and with his then No. 3 man, 13.5, 16 year-old Peter Rae again behind him in the No. 7 seat, he could do the same with the eight this year. BBC worked out over the 2000-metre course with Brisbane State High and Brisbane Grammar on Monday and cleared away from them. For a crew with an average weight of 11.7, B.B.C. handled the slightly rough water very creditably.

Brisbane State High School averaging 10.13, probably will be the lightest crew. Four members of their combination only started rowing since the last Head of the River but the stroke, Andrew Pippos, and No. 7 Graham Payne are experienced oarsman from the crew last year.”

The 1959 Head of the River was rowed on the course below:

“The Head of the River eights championship of the Milton-Toowng Reach tomorrow could be the finest in the history of GPS regattas. Experts say there is a strong possibility that the winning crew will break the record of 5 min 58 sec set by BBC in 1956. An extremely close finish is expected for the 2000-metre course with Gregory Terrace slightly favoured to beat Brisbane Boys’ College and The Southport School. A record 54 crews will compete.

The eights should race on a slightly flooding tide but river fresh may upset this calculation. If the fresh counteracts the slight flood it should favour the heaviest crew The Southport School (average weight 12st 8lbs). But in flooding conditions, the fast starting Terrace crew should be best situated. A feature of the start will be the attempt by B.B.C. from No. 5 to stay with Terrace. Gregory Terace have had more racing experience this year than any of the other eights. In five starts this season they have had five wins.”

“Although Gregory Terrace is tipped to win, last years winners, The Southport School, a hard working crew will probably trouble terrace. Brisbane Boys’ College, another stylish, steady eight, will also fight Terrace for an early lead. B.B.C. coach ( Dave Magoffin), a great believer in nursing his crew to a pitch, says it has improved immensely since its top trial performance last Monday and could cause a surprise.

Southport coach, Clavil Bere, never one to bring his crew into the open before a race, has kept his giant schoolboys to starts and steady courses since they arrive on the Brisbane River last Tuesday.”

The 6 crews lined up in the following order from the north bank:

An unusual aspect of the 1959 GPS Head of the River was the number of dead-heats in the minor races - five in all. 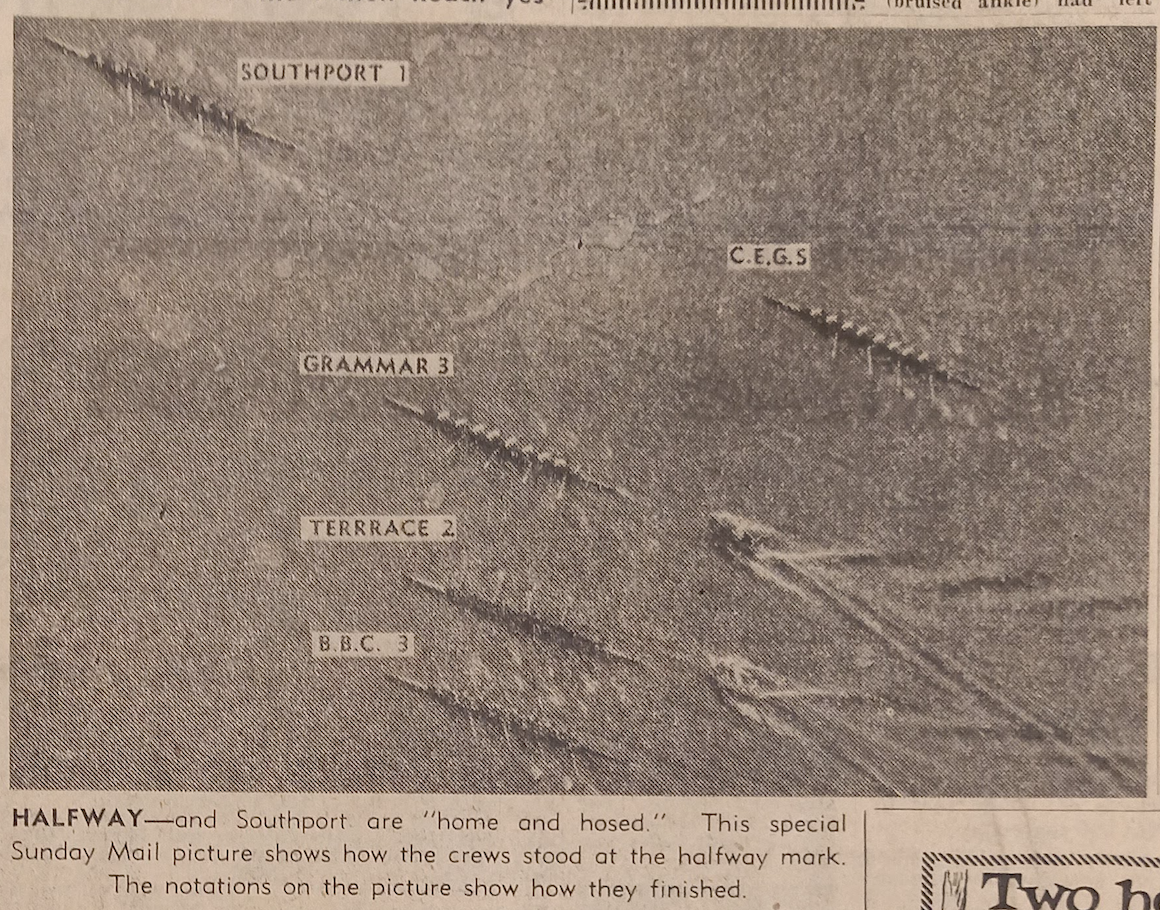 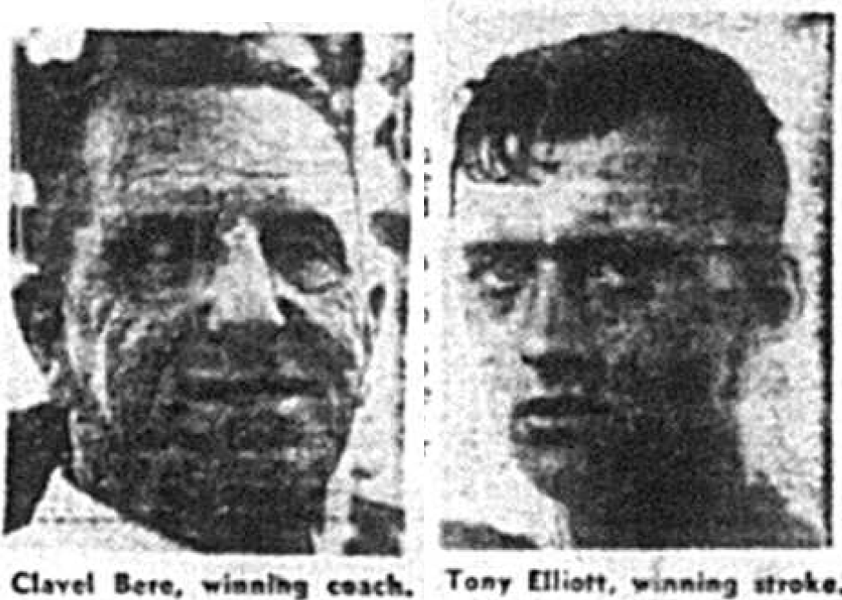 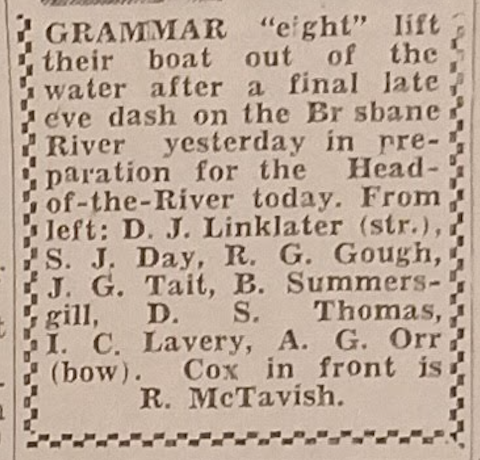 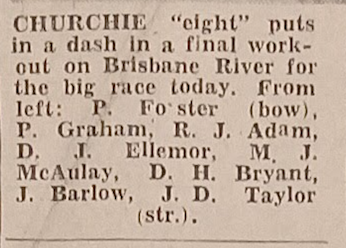 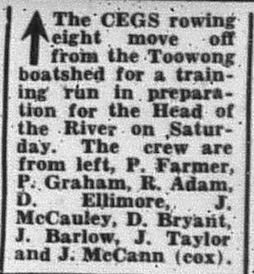 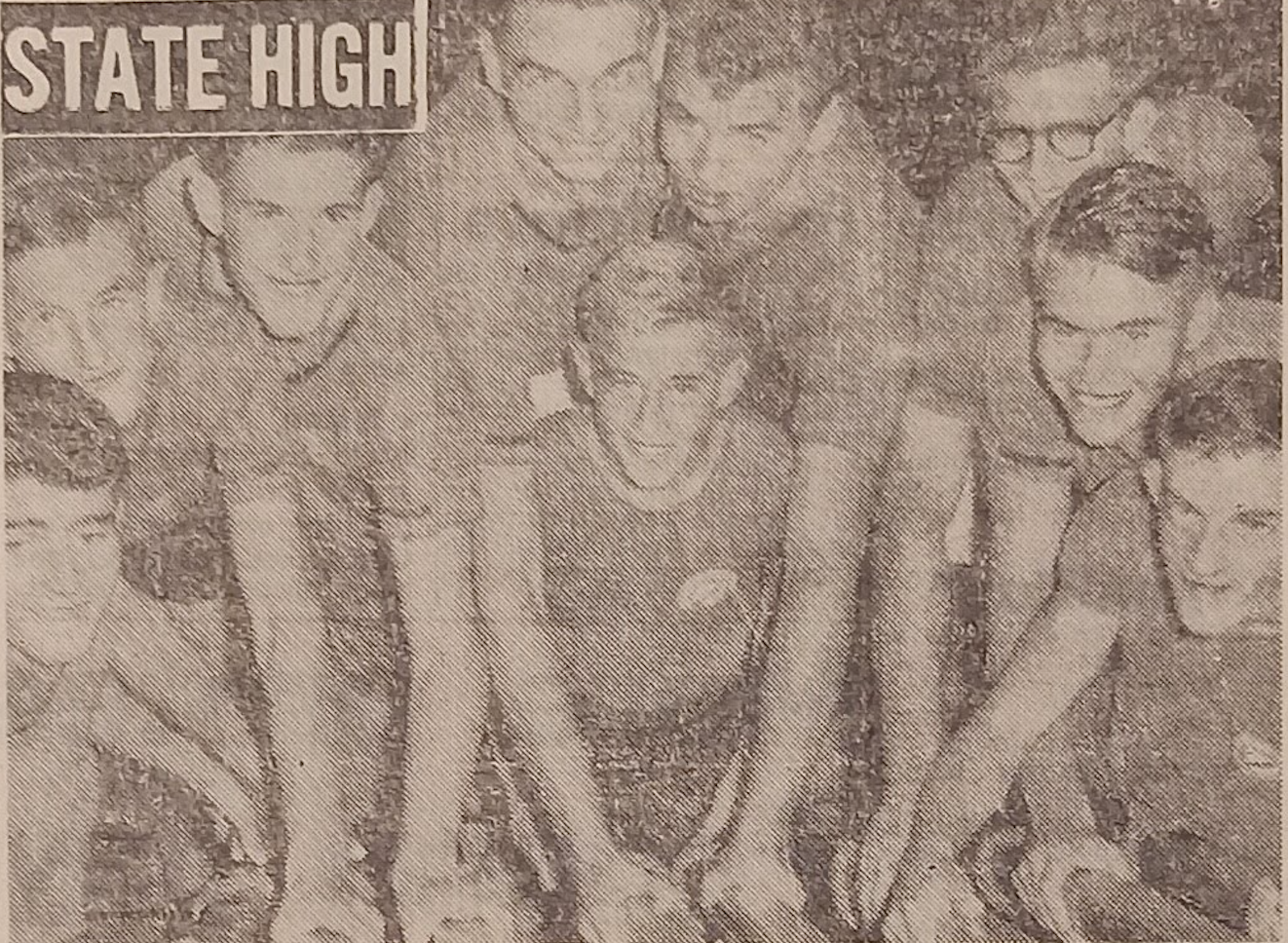 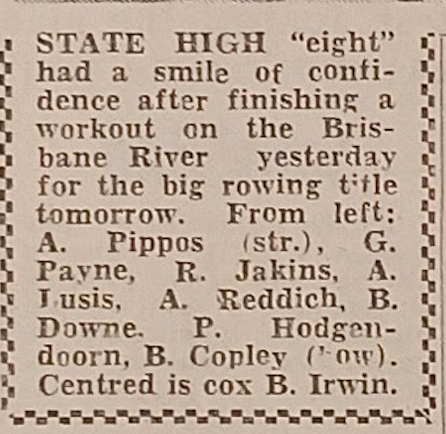 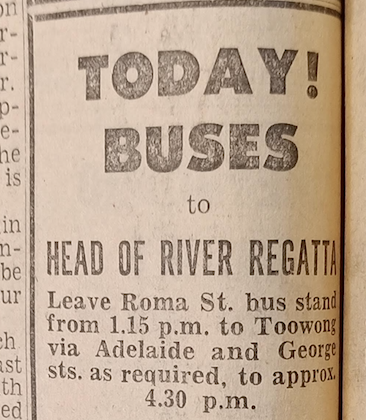 M. J. McAulay, the five seat of the 1959 Anglican Church Grammar School First VIII was the 1959 recipient of the Sylvia Dion Prize awarded to the Churchie sportsman who demonstrates the most leadership and skill whilst representing the school in sport that year.

“Fifteen thousand people saw five of the six crews fight out on of the closest “Head” finishes. Only a length and a canvas separated the five crews. “Churchie,” the unluckiest crew, “crabbed” shortly after the start and had no chance of regaining the three lengths lost. Yesterday's outing was the first time the winning Southport combination had appeared in a race.

[Southport] suffered a major setback in March when No. 7 oarsman, Bob Kelly, retired after an operation. Kelly was the force in last year’s winning crew and his loss was a great blow to Southport. But on yesterday’s form the eight rowers could have been together for years. They copied last year’s winning eight with a perfect course and a beautiful style. The Southport win was a triumph for Southport coach Clavil Bere who is becoming the “fox” of G.P.S. rowing. During his five days in Brisbane with the crew, Bere has kept his crew to slow courses and starts.

Yesterday’s favourites, Gregory Terrace, added yards to their course by bad steering after the start. Course umpire, Alf. Lewis, was forced to call Terrace on course, twice in the first quarter. The start of the race was one of the best seen on the river. All crews hit at the gun and clung together for the first four short strokes. But as Southport swung into their full stroke they almost lifted their special “banana” type boat out of the water and shot well ahead.

The fast-starting Terrace eight had to pull a high rate to stay with Southport. Then came Terrace’s lapse and the crew were hard at it to hold off B.B.C., rowing strongly in centre river. State High, the surprise of the regatta, and Grammar held their own with the top crews for most of the distance. “Churchie” has been left with their crab. Southport crossed with Terrace a canvas away followed by B.B.C. and Grammar, half a length away, dead heating for third.”

“With 100 Metres to go, the four leading crews were grouped within a boat’s span of each other. Spurred by the tremendous roar of encouragement from the 20 000 spectators, they battled it out to the line with the brilliant Southport “eight” inching ahead to a canvas margin over Gregory Terrace with Brisbane Grammar and B.B.C. dead-heating for third, half a length further back.

The race was rowed in perfect condition over a 2000-metre course on the Toowong reach of the Brisbane River. Southport with a rating of 38 were first to grip the water from a perfect start. They literally flew to the front and were never headed. Coming past the gasworks, 400 metres from the start, Southport held a length’s lead over Terrace, with Grammar close at hand, followed by B.B.C., State High and Churchie.

Approaching the half-way mark, Southport still maintained their length margin over Terrace, who had been joined by B.B.C., then coming State High. With three quarters of the race over Southport’s lead was reduced to a canvas over Terrace. Over the concluding stages, Terrace were unable to make any further impression, but Grammar came home in remarkable style to cross the line in a dead-heat with Brisbane Boys’ College for third place.

This was Southport’s second success in a row. The crew were brought to a fine pitch by their coach, 62-year-old Clavil Bere, to whom most of the credit, in the words of Southport stroke Tony Elliot, must go for the victory.”

“In the first fours, the final event on the programme, Churchie in a paralysing burst, caught the leaders, B.B.C. on the line to share first place, half a length being Gregory Terrace in third place.” 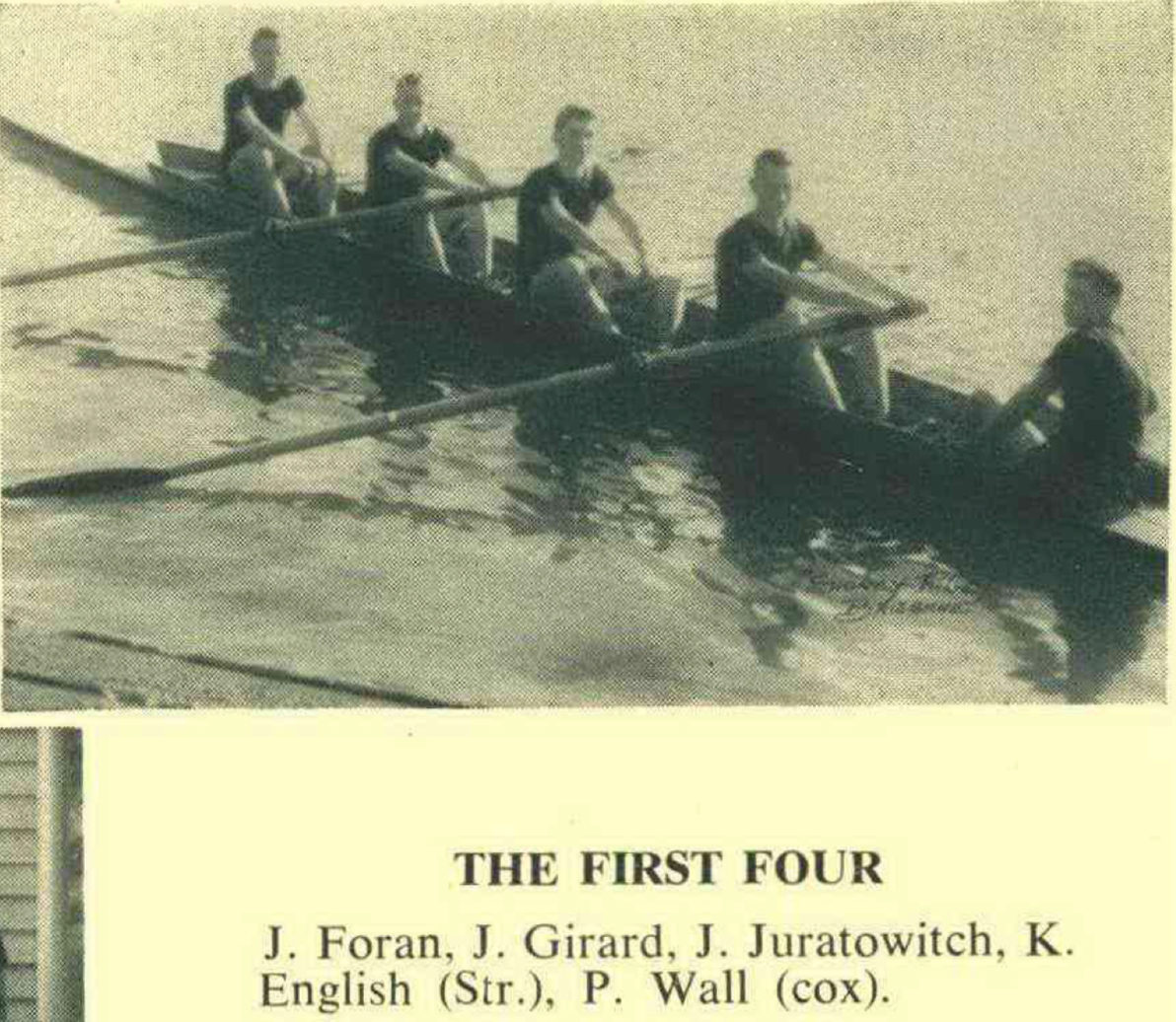 “Gregory Terrace won their first race in a head of the river regatta sicne entering the competition five years ago when they took the second fours by a length, with B.B.C. and Grammar dead-heating for second.”