The 18th Head of the River was conducted on Saturday 6th May 1939 on the Milton Reach of the Brisbane River.

According to the papers, "“A Crowd of about 1000 enthusiasts gathered at the vital finishing point, the Knoll, a few hundred yards above the Grey Street Bridge, and many cars raced along Coronation Drive for the starting point near the Davies Park Baths. There was the usual brilliant showing of school colours and hearty barracking.” (Page 8, The Telegraph, 6 May 1939 Edition)

In the lead up to the event, The Telegraph reported that "“Present indications coupled with past performances suggest that the race will be a thrilling one between Brisbane Boys’ College, Church of England Grammar School and State High School, with the Southport School and Brisbane Boys’ Grammar School settling matters between them at the tail end of the field.”

Church of England Grammar secured a magnificent double, but didn't win every race on the programme. Brisbane Boys College thwarted what would have been an impressive Churchie treble in the inaugural All Schools' Third Race by a mere canvas. in 1939 Churchie secured the coveted Rowing/Rugby double with their 1st XV winning the Brisbane Schoolboy Rugby competition as well. John Mactaggart and Stuart Parkinson participated in both victories.

The 5 crews lined up in this order from the North Bank. 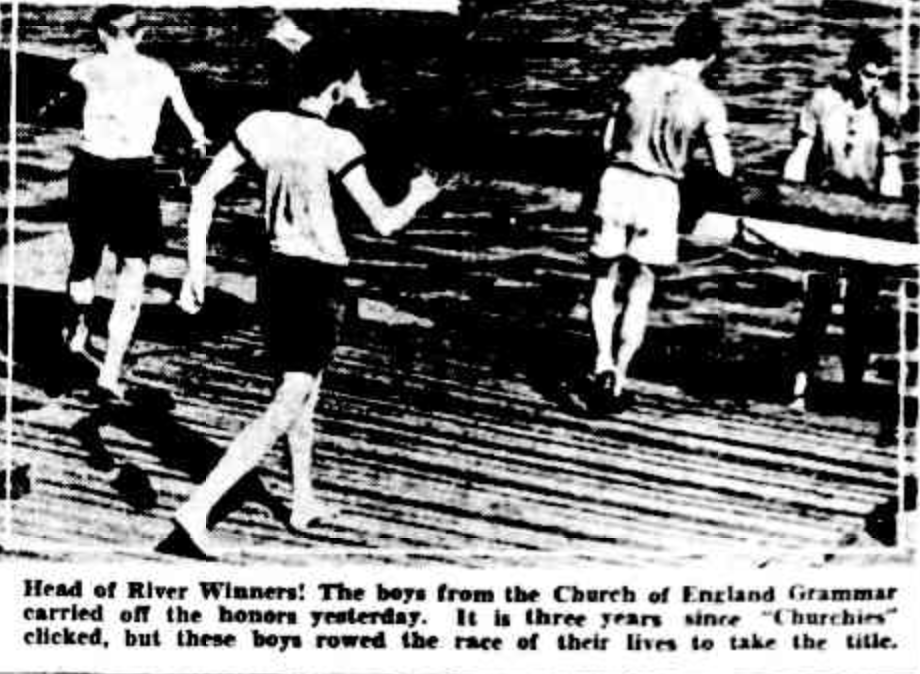 To consolidate this success, Churchie purchased a new racing four in 1939, named: S. M. Bruce. A contempary of Inaugural Churchie Headmaster at Melbourne Grammar School, First Viscount Bruce of Melbourne, statesman and diplomat, Prime Minister 1923-1929, educated at Trinity Hall, Cambirdge called to the bar in 1906 in England, served with distinction in the British Army 1914-1917 (invalided home to Australia), Australian High Commissioner in London 1933-1945, Chairman of the UN FAO intial committee, the first Australian awrded a Viscountcy in 1947, chairman of the Uk Finance Corporation for Industry 1947-1957, first Chancellor of the Australian National University in 1951. 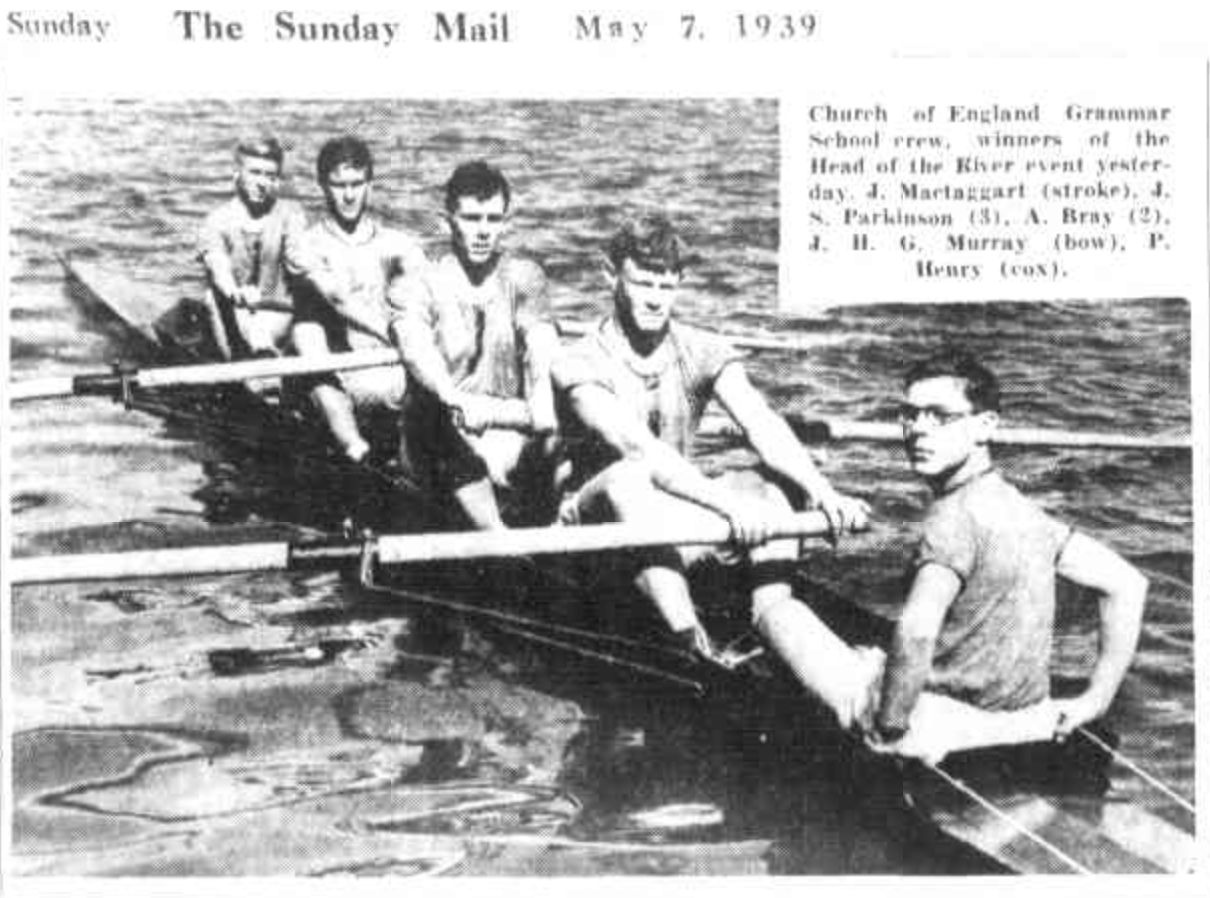 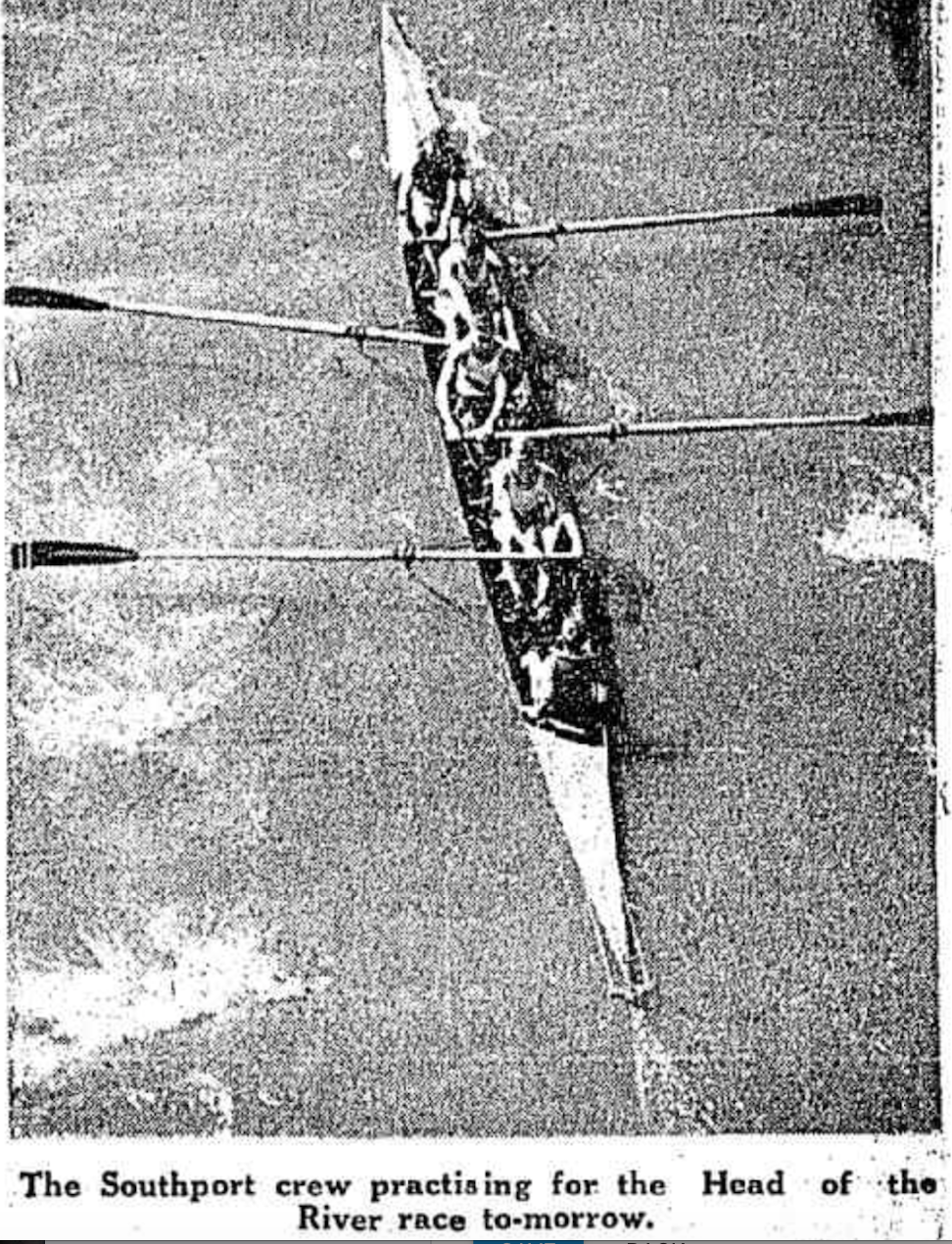 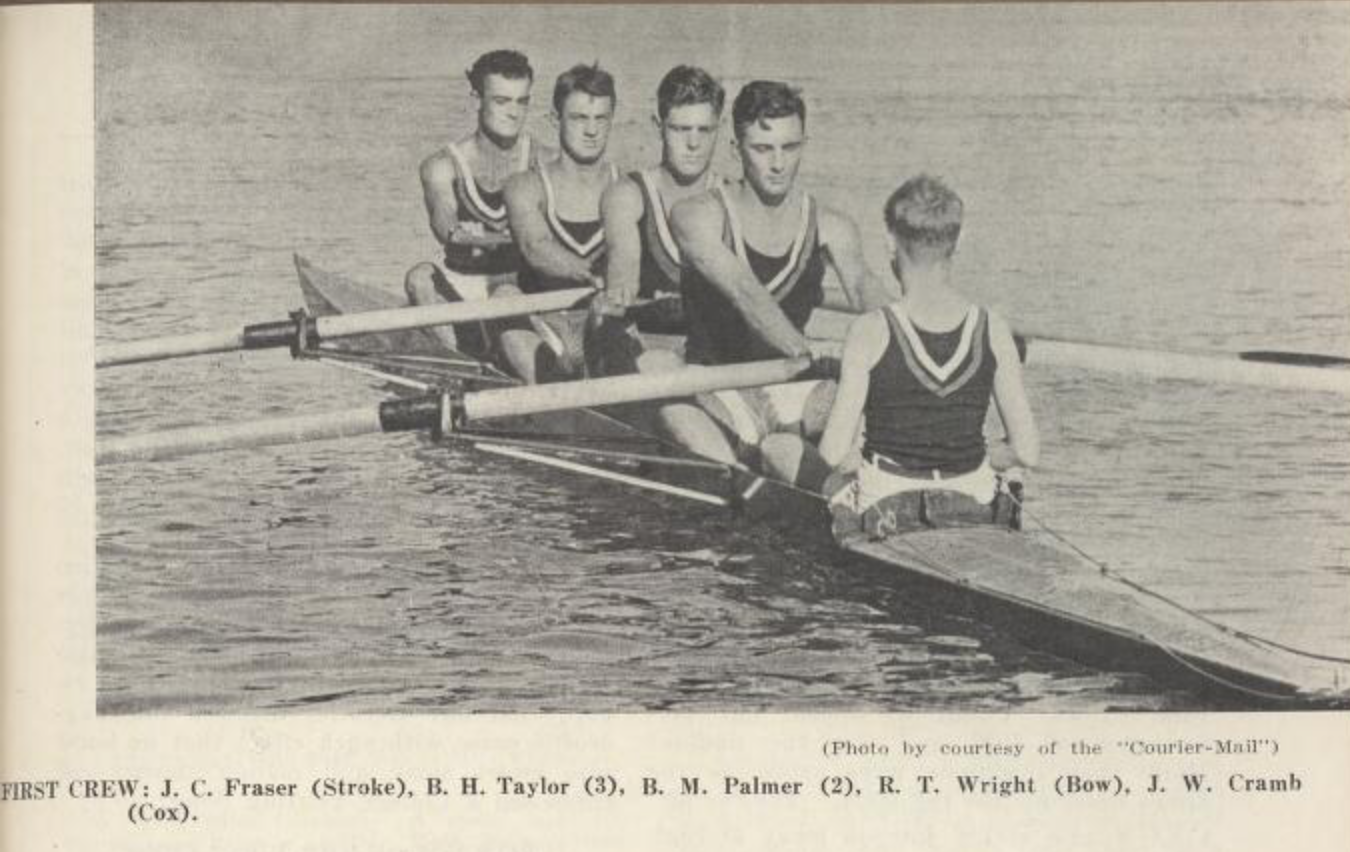 “The starter, Mr. George Smoothey, got the firsts away in an excellent line. B.B.C., B.S.H.S and C.E.G.S. went to the front quickly leaving B.G.S and Southport a couple of yards behind after the first 50 yards had been covered. B.B.C. got to work in fine style a little later and after about 150 yards had been put behind they had a slight advantage over B.S.H.S with C.E.G.S little father back.

C.E.G.S improved considerably approaching the half mile mark and passing the ferry were a canvas ahead of State High and B.B.C., who were almost on terms. Southport too, was almost up with the leaders at this stage but were dropping back. B.G.S. were last. B.B.C. and B.G.H.S. crews were called upon for an extra effort shortly afterwards and they established a narrow lead. C.E.G.S. however were rowing well within themselves and hitting up the rating to 40 they slid into the lead from from B.B.C with B.S.H.S. running close third. T.S.S. and B.G.S. were well out of the race at this stage, battling along almost together lengths behind the leaders.

Approaching the finishing line C.E.G.S obviously had the race won, but B.B.C and B.S.H.S were still fighting out second place with B.B.C having a slight advantage. Over the last 50 yards B.S.H.S with a great burst drew level right on the line and the judges failed to separate them. Officially this pair were a length and a half behind C.E.G.S.. T.S.S. were nearly two lengths away in fourth place, with B.G.S. last.”

John Mactaggart had been a Prefect, Captain of Boats and stroke of the victorious Head of the River crew of 1939. He was also part of the successful School Rugby team that went undefeated that season.

In World War II, MacTaggart enlisted in the RAAF as a flying officer and tragically perished in Egypt on 18th August 1942 aged only twenty. Son of John Lacy Mactaggart and Marjorie Jane Gilmore Mactaggart of Ascot, Queensland, he was laid to rest at the Alexandria (Chatby) Military and war memorial Cemetery in the country he died serving his country.

His father was a veteran of World War I and had been a member of the School Council for about 20 years prior to his death in 1964. All three Mactaggart boys attended Churchie and were Captain of Boats in their final year.

In 1955,  Church of England Grammar School commemorated John MacTaggart by naming a boat in his honour. Below is an excerpt about the boat's christening from Churchie's 1955 School newsletter courtesy of Peter Jell:

"This beautiful N.S.W. regulation four, built by Towns, arrived soon after the School broke up. It had been on order for a very long time, but its beautiful shell of matched cedar bondwood was worth waiting for. We had planned for years to call this four after John Mactaggart, captain of the First crew of 1939. John was killed with the R.A.A.F.

John Mactaggart's father and mother had planned to leave for England during the holidays so the launching ceremony was hurriedly arranged for 11th December, a Saturday morning. There assembled a small but very representative gathering of Old Boys, parents and friends and most of the crews of the school, to see Cannon W. P. F. Morris christen the four. It was also the last time we had Mr. P. A. Krebs with us at the boatshed.

Canon Morris spoke with great feeling of John Mactaggart as a boy, an oarsman, and a man who fearlessly offered at the call of duty. Canon Morris named the boat in the traditional fashion, and , launched over the new pontoon, she was rowed away an Old Boys' crew made up of two brothers of John Mactaggart and two of his cousins." 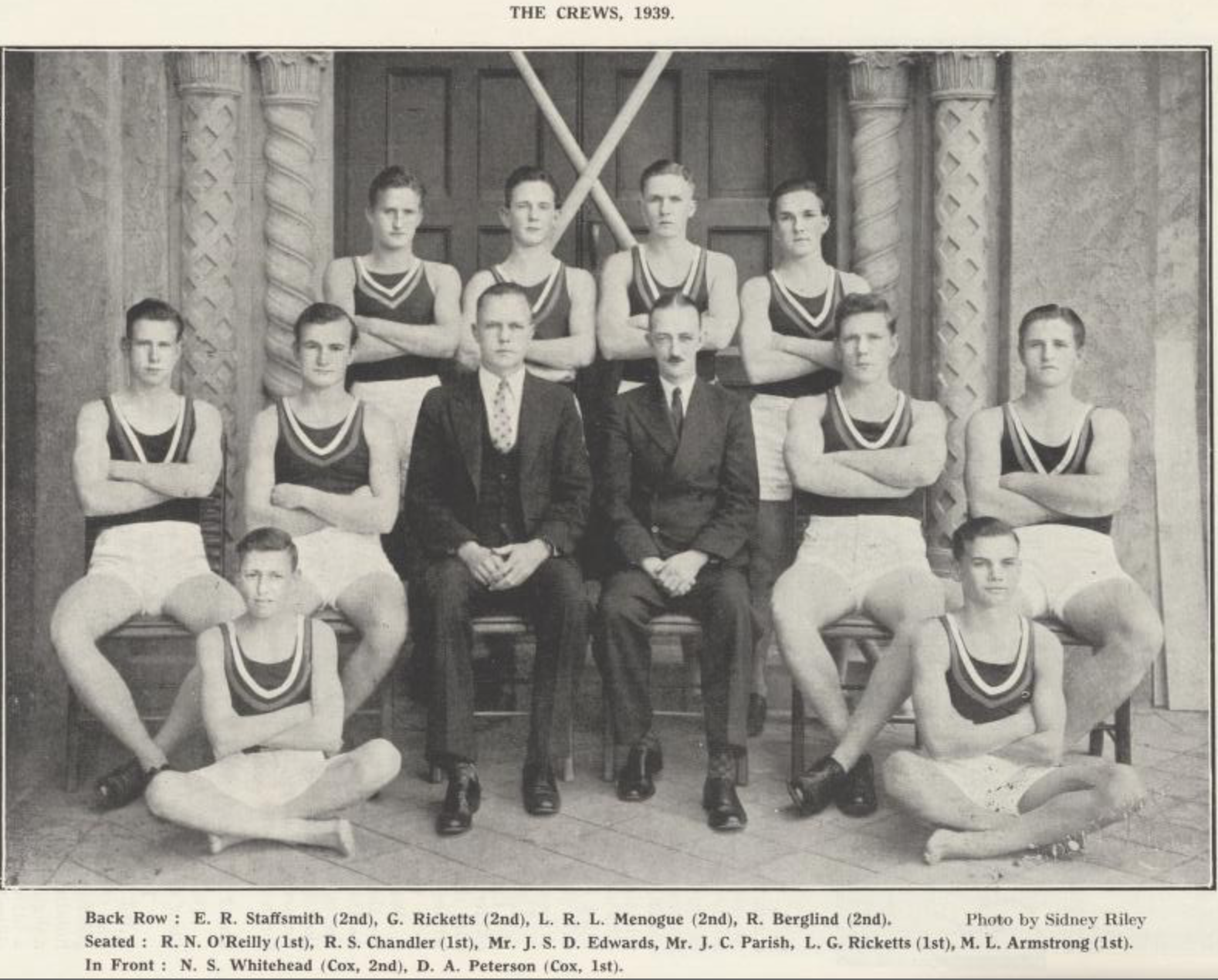 “The five second crews got away well, except that Southport were about two feet behind. C.E.G.S., rating at 41, were the first to show out, while Southport showed early signs of being left during the race. After a little over 100 yards, B.S.H.S, were on terms with C.E.G.S., then coming B.B.C., B.G.S., and Southport. B.S.H.S and C.E.G.S. drew away from the others, and set up a lead of about half a length approaching the half mile mark.

It was close racing between State High, C.E.G.S. and B.B.C. and at the ferry C.E.G.S. had worked into a lead of half a length from B.S.H.S with B.B.C. a close third. T.S.S were next, with B.G.S., rowing very raggedly, a bad last. Just after passing the ferry, State High went to pieces and stopped rowing to pick up timing again. By the time they had settled down once more, C.E.G.S., had gained a big lead, and B.B.C had run into second place.

C.E.G.S went on to win very comfortably by two lengths from B.S.H.S with B.B.C a length and a half farther away in third place. Southport were half a length away in fourth place, leading B.G.S by half a length.”

“The crews got away well, B.B.C. securing an early lead over C.E.G.S.. At the ferry C.E.G.S. went to the front and seemed to have the race well in hand when B.B.C. put in a magnificent spurt to head C.E.G.S. by a length.”