The 29th Head of the River was conducted on Saturday 21st April 1951 on the Toowong Reach of the Brisbane River.

B.B.C.'s dominance of the GPS Head of the River continued in 1951 with the College completing an impressive treble by winning each of the three events on the programme.

A record 10 000 strong crowd lay witness to dramatic circumstances in the Championship Fours contest. Churchie crabbed with only a handful of yards to go allowing B.B.C. to row past them and attain their fifth O'Connor Cup trophy since the competition resumed after World War II.

Having proven victorious at the University Regatta in the Maiden Fours division on Saturday 1st April 1951, The Southport School were considered as strong candidates for the trophy by pundits in the Brisbane tabloids during the lead up the Head of the River regatta.

And for the Second Crews, commencing at 4.15 PM:

The races were rowed rather late in the day to ensure a suitable tide. 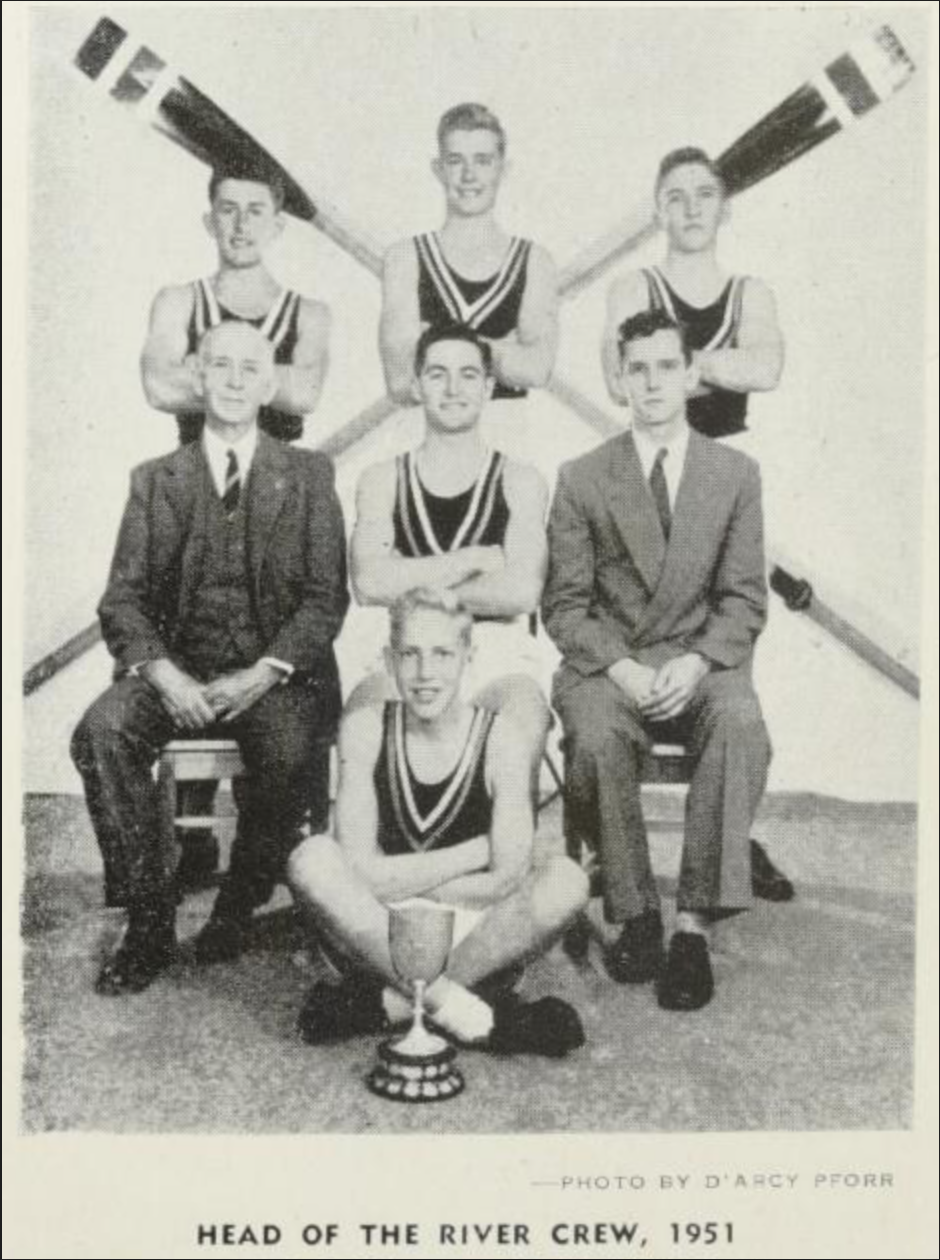 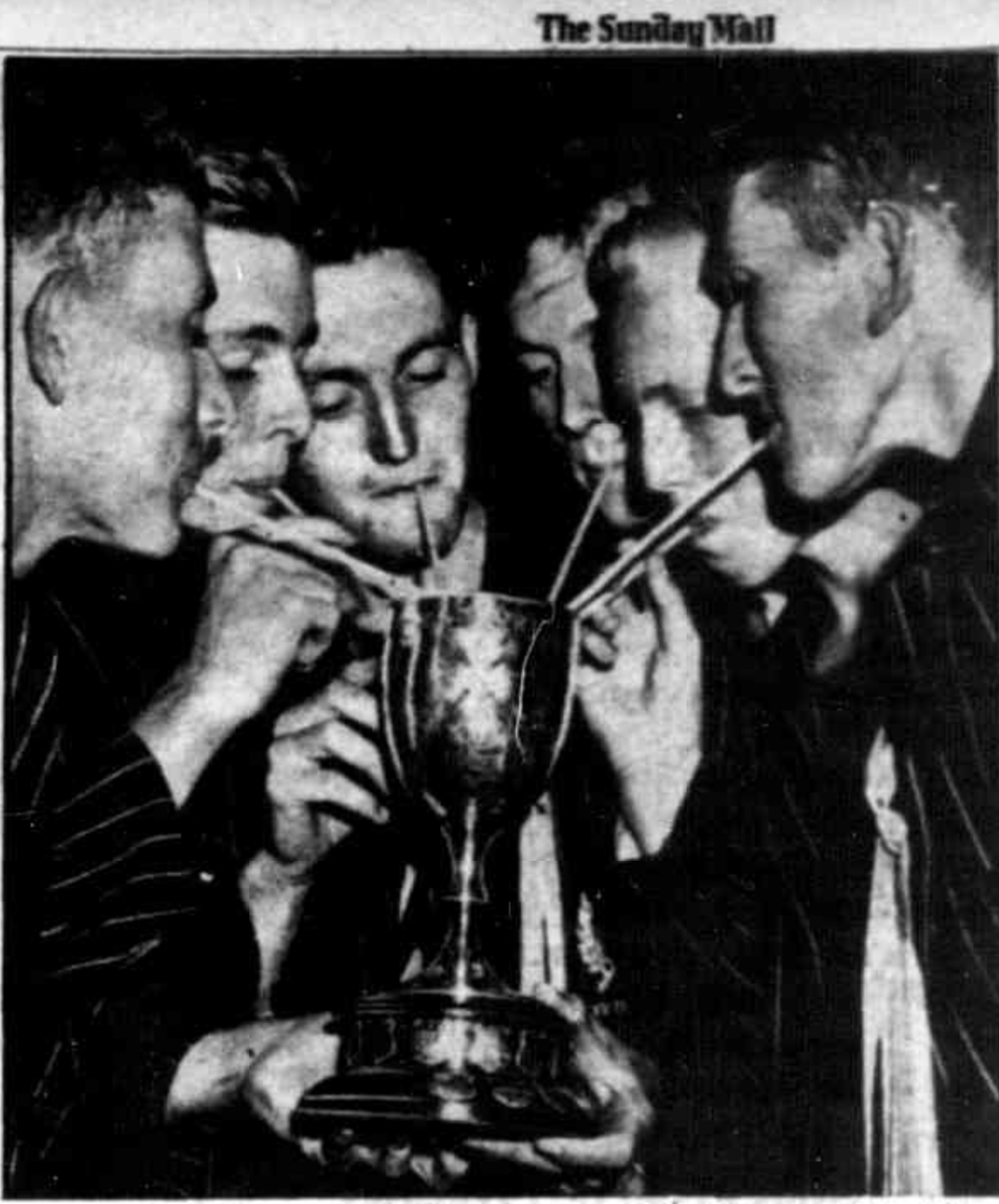 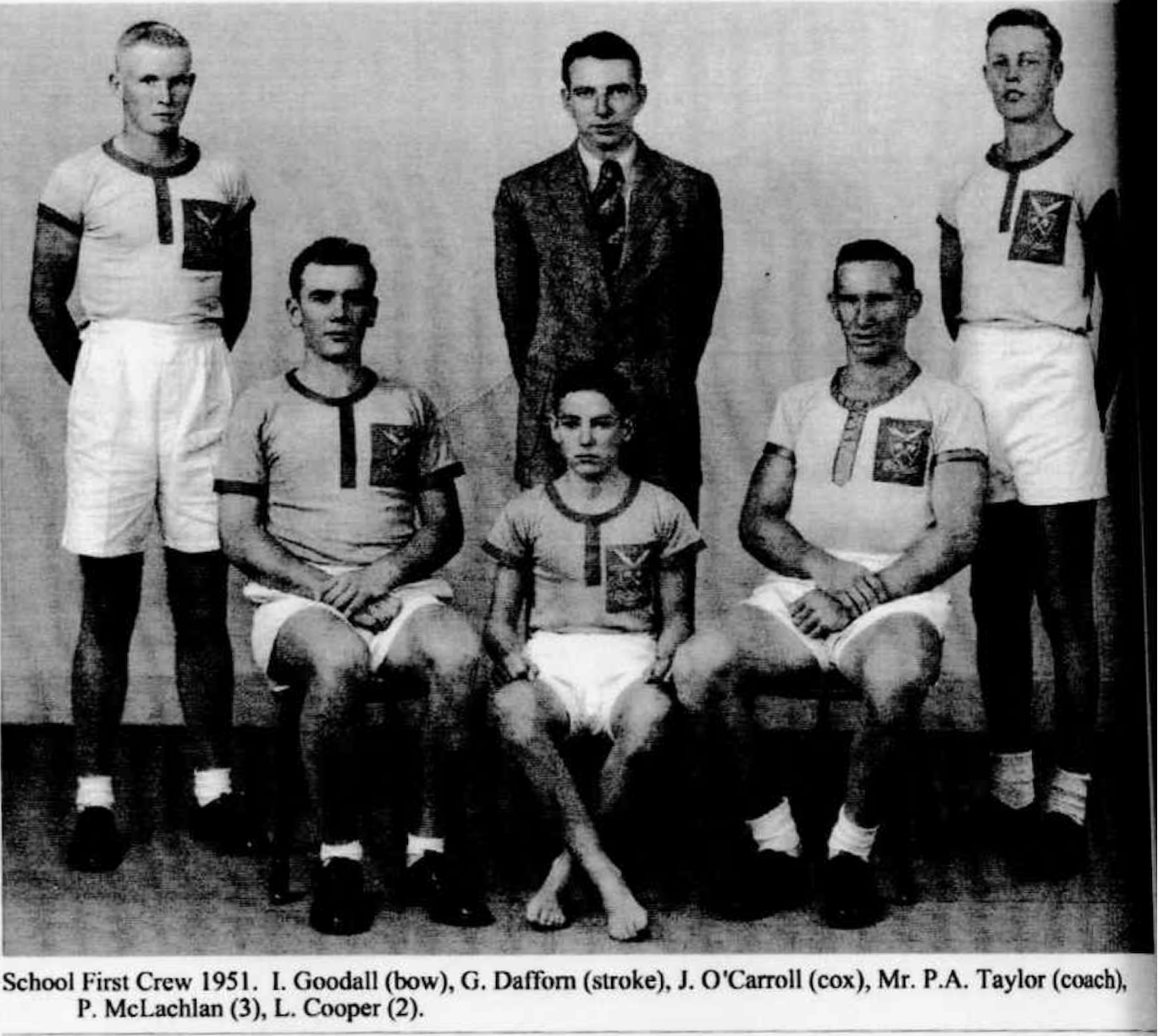 “With victory two strokes away, Church of England Grammar School lost the 1951 Head of the River race in one of the most sensational regattas ever seen in Brisbane. From the start a battle developed between C.E.G.S, Brisbane Boys’ College and the Southport School. At the finish C.E.G.S were giving a last fighting dozen which should have won them the race. Their supporters were cheering the victory when suddenly the crew caught a tremendous “crab”. The shell lurched heavily and stopped running it own length. In a matter of seconds, B.B.C, Southport, State High and Brisbane Grammar flashed by to claim the positions in that order…. The Performance of the C.E.G.S. crew was all the more remarkable when it is considered that they had been only the school’s second crew. In a race eve challenge race they downed the school’s first crew, and the crews changed races. ”

“Brisbane Boys’ College yesterday won the most unusual Head of the River race ever rowed in Brisbane… Church of England Grammar School had the race almost won when they “crabbed” on the line…. In such calm conditions, a crab could only be regarded as bad rowing. The one error cost the crew the race.”

All crews got away to an excellent start, and after the first six strokes B.B.C. had a slight lead on C.E.G.S. and T.S.S. with B.G.S. and B.S.H.S. a little further back. After settling down B.B.C., rating twenty-eight, increased the lead to half a length on Churchie, rating thirty- three. State High and Southport were half a length further back, and Grammar had dropped two lengths further behind. Gradually B.B.C. drew away to a length lead with the other positions unaltered. At the three-quarter mile mark Churchie brought up their rating and gained half a length on B.B.C. still rating twenty-eight. . Now. B.B.C. and Churchie raced for the line, but twenty yards short of the finish a Churchie man collapsed, checking the run of the boat. B.B.C. stopped short also but the running boat carried B.B.C. to victory a half-length ahead of Southport with State High a quarter length back in third place. B.G.S. finished several lengths back in fourth position.” 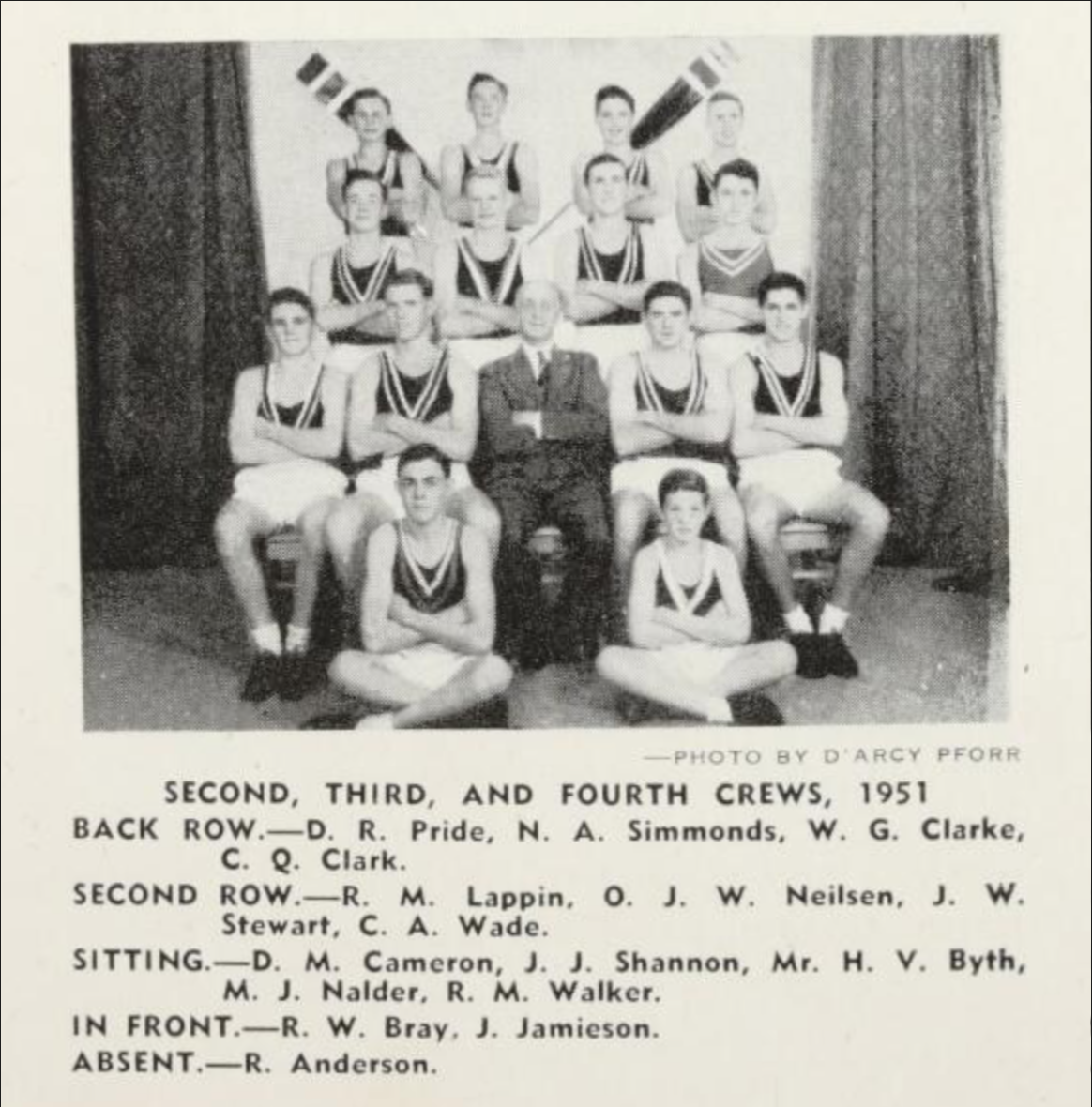 “The crews were lined up well and all got away to a good start. B.B.C. started very fast and took an early lead from State High, with other crews well bunched. B.B.C. gradually increased the lead, but B.S.H.S. on the north bank started their final sprint early and gained on B.B.C. [B.B.C.’s] crew then raised the rating and crossed the line half a length ahead of State High, with C.E.G.S. in third place.”

R. J. Douglas rowed in the two seat of the 1951 Church of England Grammar School 2nd IV. . As a leaving gift he donated the Douglass Cup for competition between School 1st VIII at the Churchie Regatta. It was first contested in 1952 and won by Churchie. This race was the first race for eights among Brisbane Schools in some twenty years and was the beginning of the lead up to GPS Championship being race in eights annually from 1955.

“B.B.C. had four crews in this race. Soon after the start the event developed into a race between [B.B.C.’s] Thirds and Fourths on opposite flanks. The Fourths, in far better water Won by three feet from [B.B.C.’s] thirds, who were several lengths ahead of the procession which followed led by Churchie Thirds and tailed by [B.B.C.’s] fifths and Sixths.”