The 1957 Head of the River was conducted on Saturday 6th April 1957 on the Milton Reach of the Brisbane River.

However, in the lead up to the contest, this result was far from a foregone conclusion. Below are some excerpts from the Brisbane Telegraph in the week prior to the Head of the River:

"The Southport Eight have been putting so much drive into their training rows for the Head of the River on Saturday that 3/8 inch adjusting screws on the swivels have been shorn off. Coach C. Bere claims it is power and not rough work that has caused the breakages. He has replaced the brass with stainless steel. They're not a nice looking crew in the sense of smartness but Southport have adopted some ideas learnt by their coach at the Olympics.

Their ability to wind up a good sprinting burst is most impressive. Gregory Terrace will rely on an early lead as a counter to the heavier crews on Saturday. Most precise crew in timing is CEGS. Winding up a formidable training mileage with a final 2 600 metre course today they could lift CEGS to the standard of their hat trick period of 1939-1941. The solid Grammar combination will work right up to the afternoon before the race.”

“All crews seem to have reached a good rowing standard, In training rows, both BBC and Terrace are known to have done times faster than the race record of 5:58.00.

Pattern the race seems likely to follows is that Terrace should show out early with State High, CEGS and Grammar moving forward at the half-way mark. In the run to the finishing line Southport BBC and Terrace should dominate with CEGS finishing fast”

The Coaches of each crew had this to say the night before the race:

"Southport Coach (Clavil Bere): “ I think we will perform well. Our main worry will be from B.B.C. Since Dave Magoffin took them over again they are a force to be reckoned with.”

Grammar Coach (Norm Hirst): “All I can say is that I expect a tight finish.”

Gregory Terrace Coach (“Tigger Fleming): “Terrace is a tough crew. I think we will find Southport hardest to beat.”

B.B.C. coach (Dave Magoffin): “I never like to make predictions, but this crew is shaping as well as that which won last year’s ‘Head’.”

“Churchie” Coach (A. Kidd): “I think it will be just as close as the maiden eight two weeks ago. This is our best crew for three years.”

State High Coach (Wally Hughes): “I don’t expect my crew to win. They are too inexperiencd. Until four month ago they had never held an oar. But they will be all rowing next year and will be a force in that ‘head’"

Clavil Bere concerns were about the coaching prowess of David Magoffin were justified and he won his second successive Eight-oared O'Connor Cup. However, the opposition coaches would have also revered the stroke of the winning B.B.C. crew, John Adam, who stroked the eight to victory in the Head of the River race for the second straight year.

According to the Truth:

"Weather conditions for the event were perfect, and the river surface was as calm as a millpool, despite a slight south-east cross-wind following the crews." Page 21 Truth, Sunday April 7th 1957 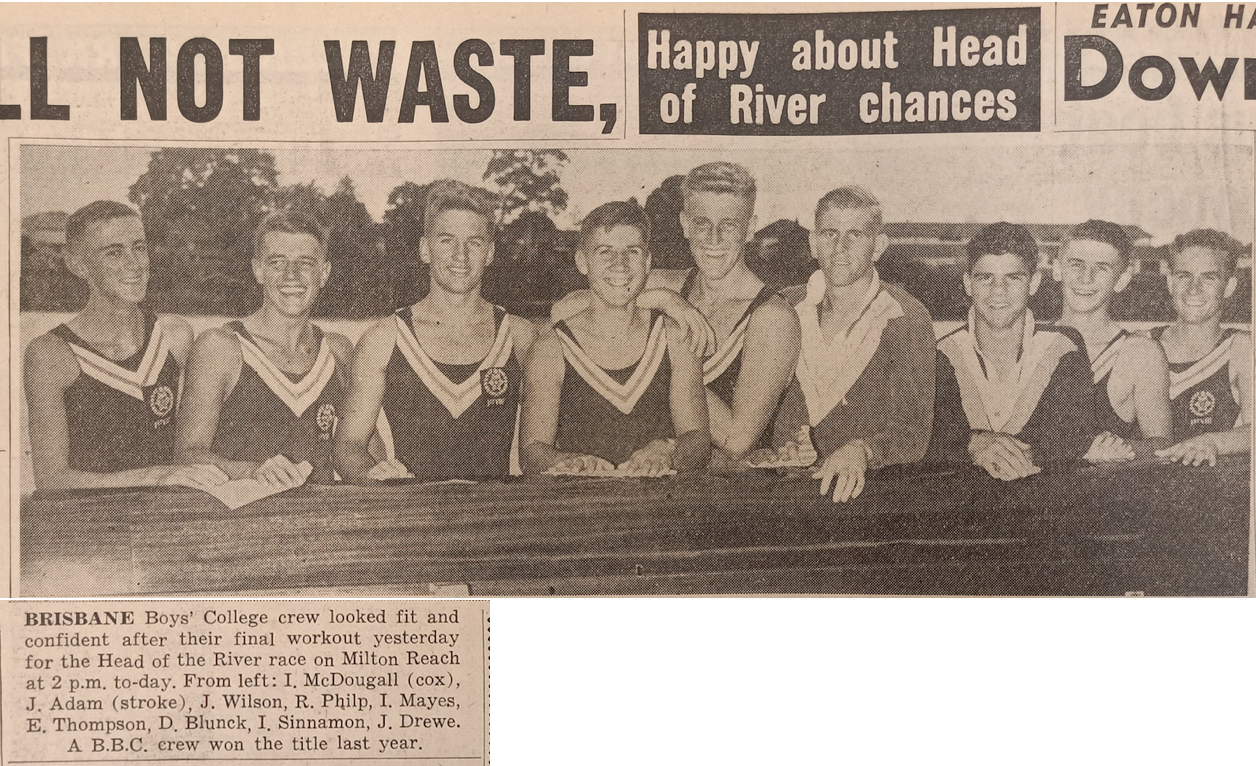 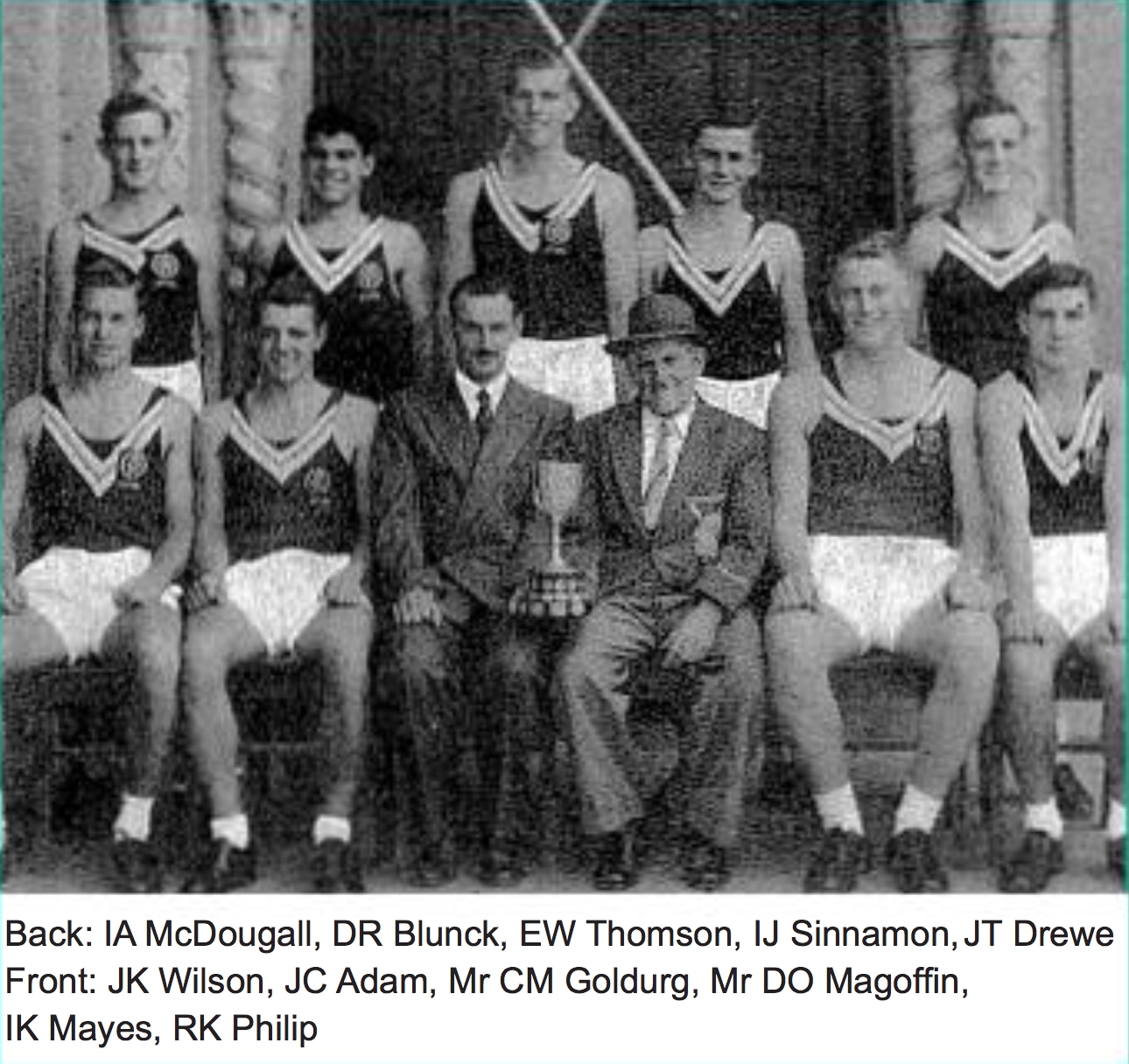 "A big crowd watched the finish of the 1957 GPS Head of the River as the Brisbane Boys' College crew wins by three-quarters of a length from Southport, Grammar was in third place." Page 24, Brisbane Telegraph, Saturday April 6th 1957 Edition 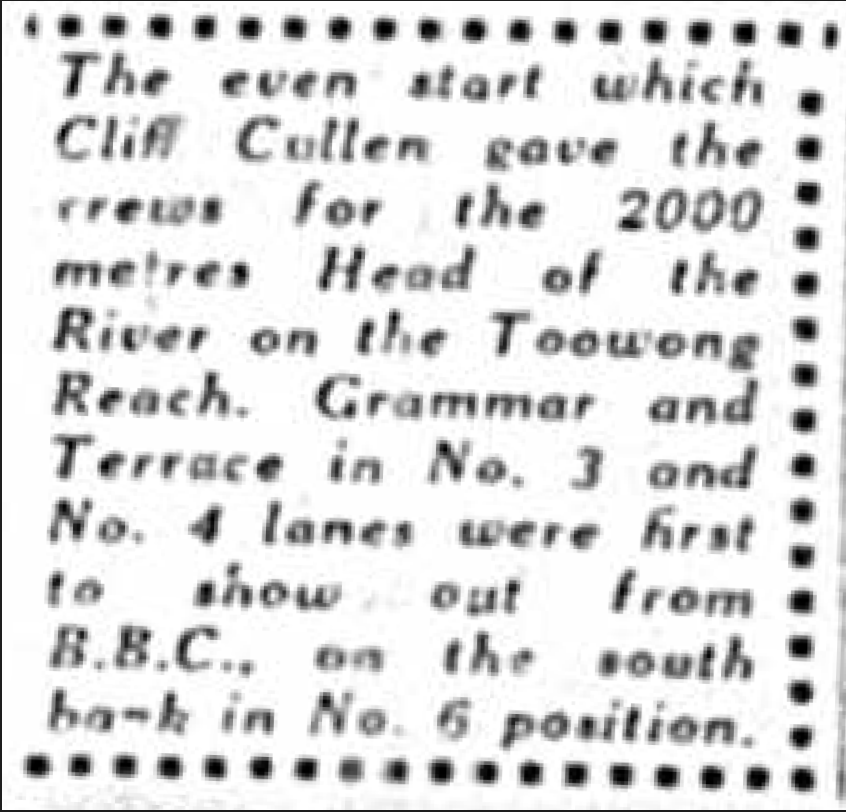 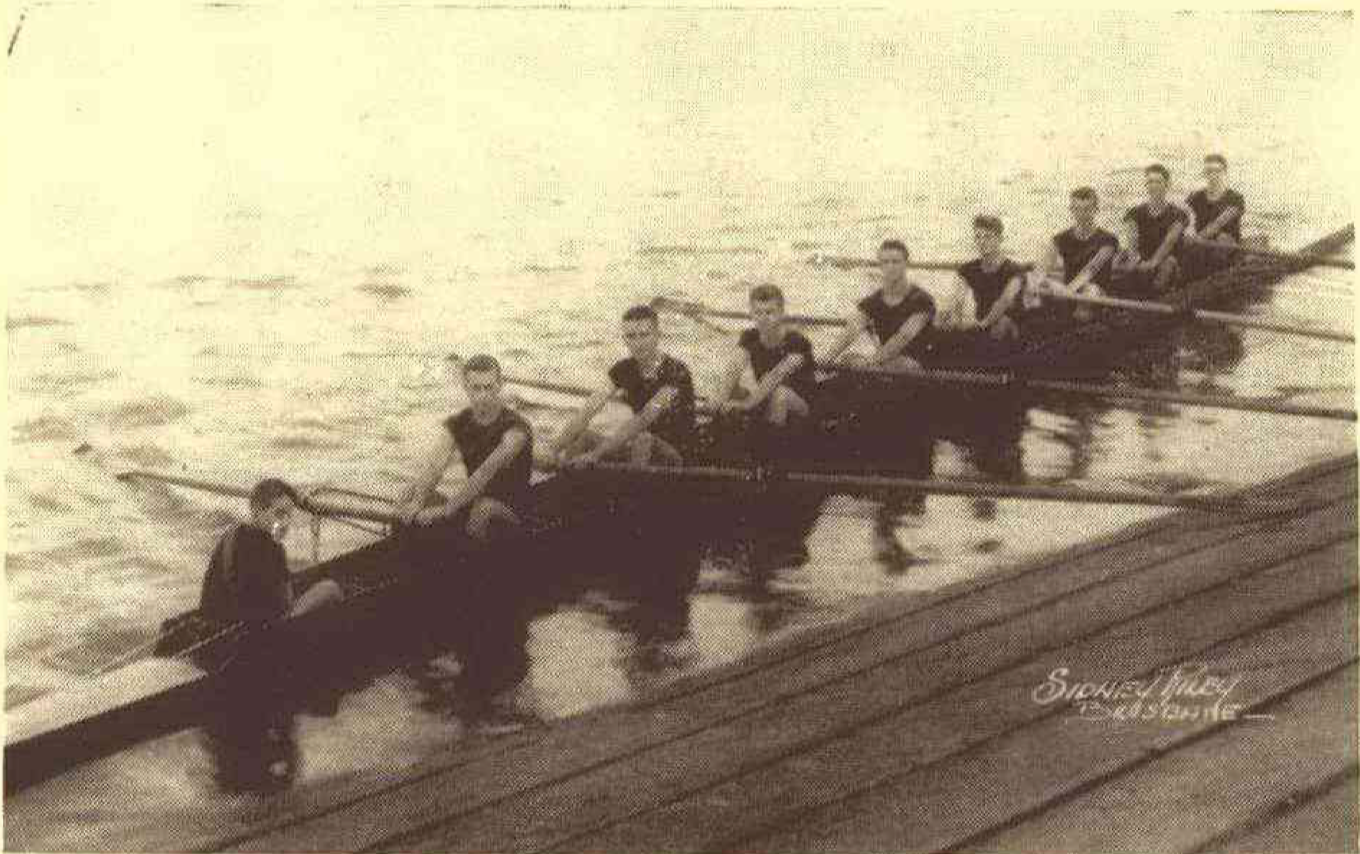 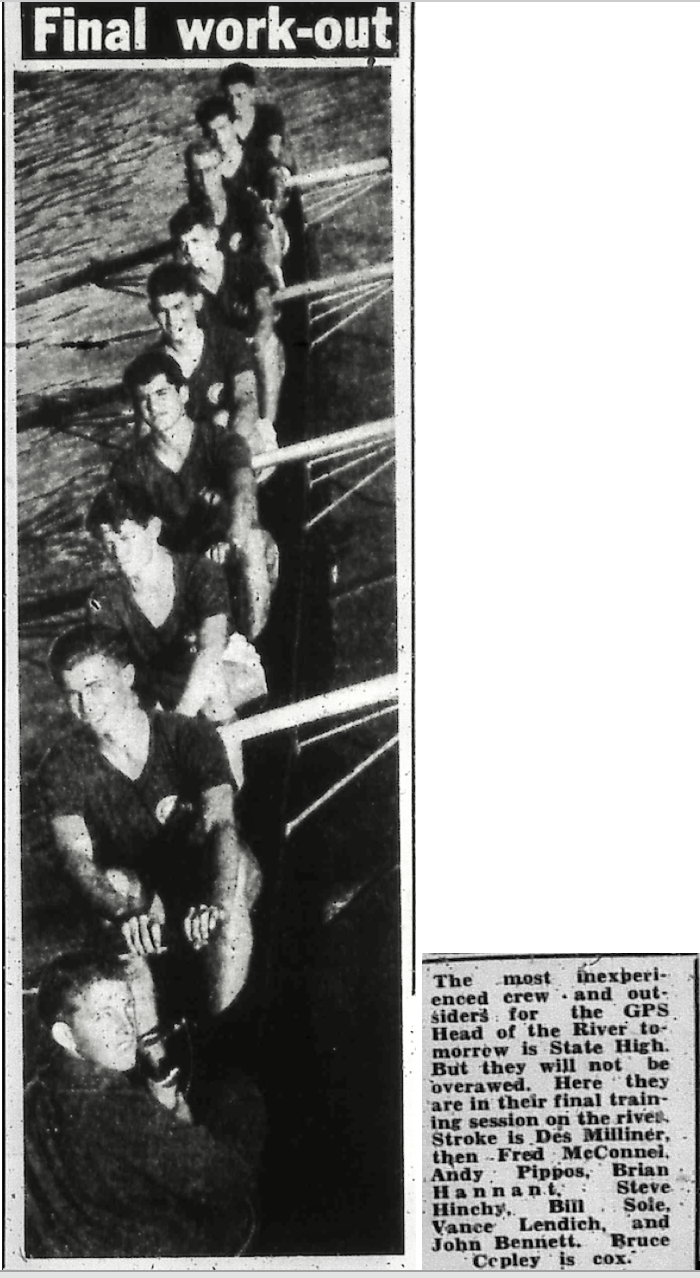 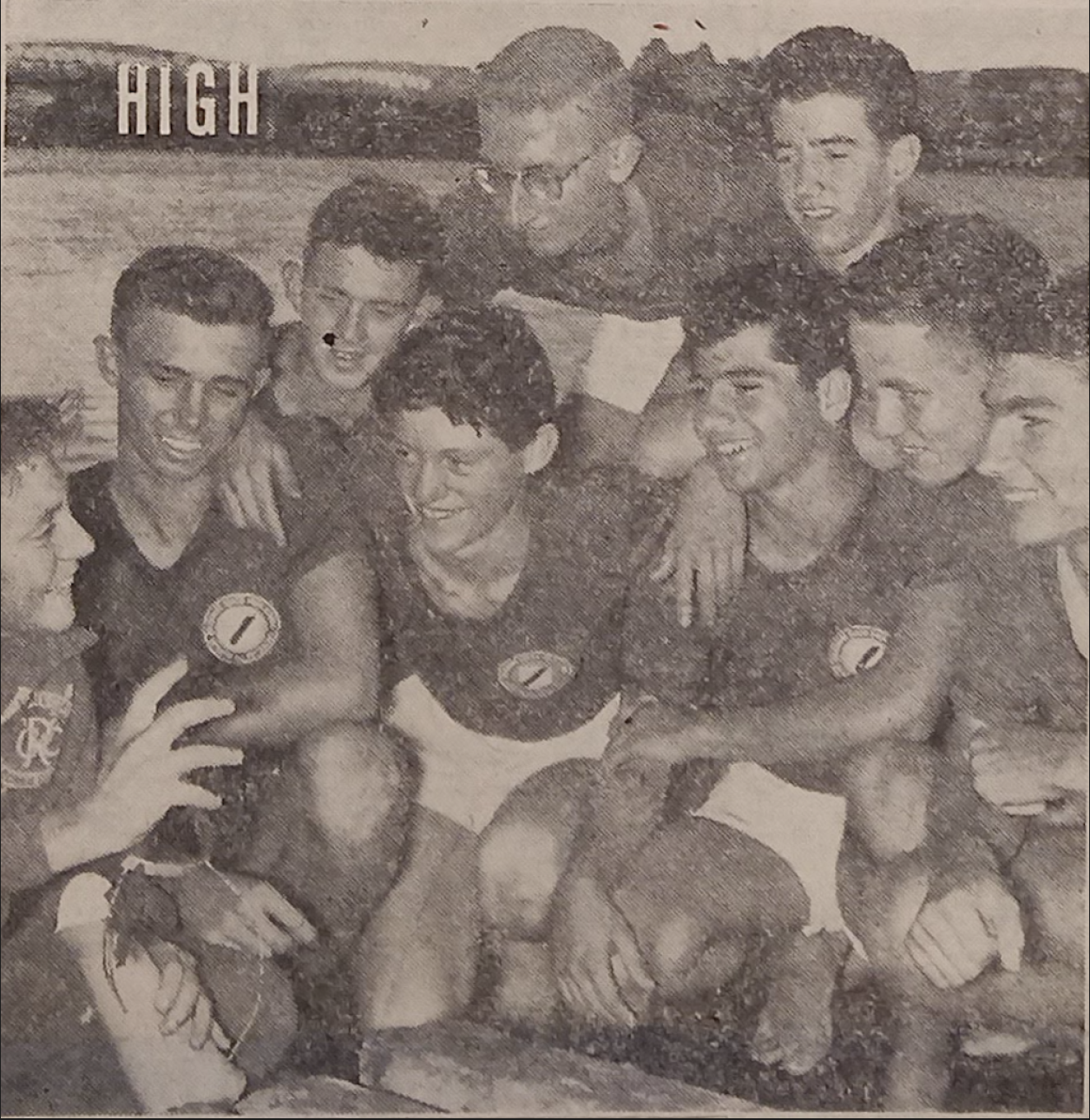 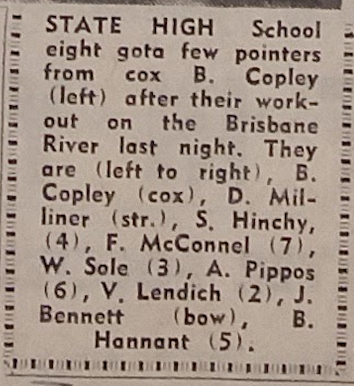 "Starter Cliff Cullen got the crews away well with Brisbane Grammar and Gregory Terrace first to show out slightly from BBC and TSS.Past the mile post Grammar led from Terrace and BBC with TSS a canvas away then CEGS further back by two lengths. BBC rowing beautifully with splendid blade and body work began to open up a lead on BGS and Terrace at the three quarter mile mark. Going to the half mile, BBC was rating 38 strokes to the minute but Southport with a slightly lower rating was starting to move up. Southport’s effort brought them within a quarter of a length of the BBC, with BGS, GT, CEGS and State High following in that order.

BBC coach Dave Magoffin was not available for comment immediately after the race but captain of Boats, Ian Mayes, said his crew never knew they had the race won. Southport coach Clavil Bere said BBC was too good: “My boys may have left their finish a little late but then they probably had a bit of sting taken out of them by BBC in the middle of the race.” He said.

“Cliff Cullen got the crews away to a good even start.

Rating 32, Gregory Terrace and Grammar were a fraction ahead of B.B.C. at the end of the first 100 Metres. Approaching the 500 metres mark, B.B.C. joined the two leading crews who were slightly in front of Southport. Churchie were one and a half lengths further back making no impression. Leaving the 1000 metres, B.B.C. lifted their rating to 34 and took the lead from Southport who were just ahead of Grammar with Terrace dropping back to join Churchie and High two lengths behind.

The B.B.C. crew held off two determined challenges by Southport, first at the 1300 metres mark when Southport drew level, and again in the final dash to the line. Although Grammar rowed an even race to finish third, condition found them out when the pressure was applied.” 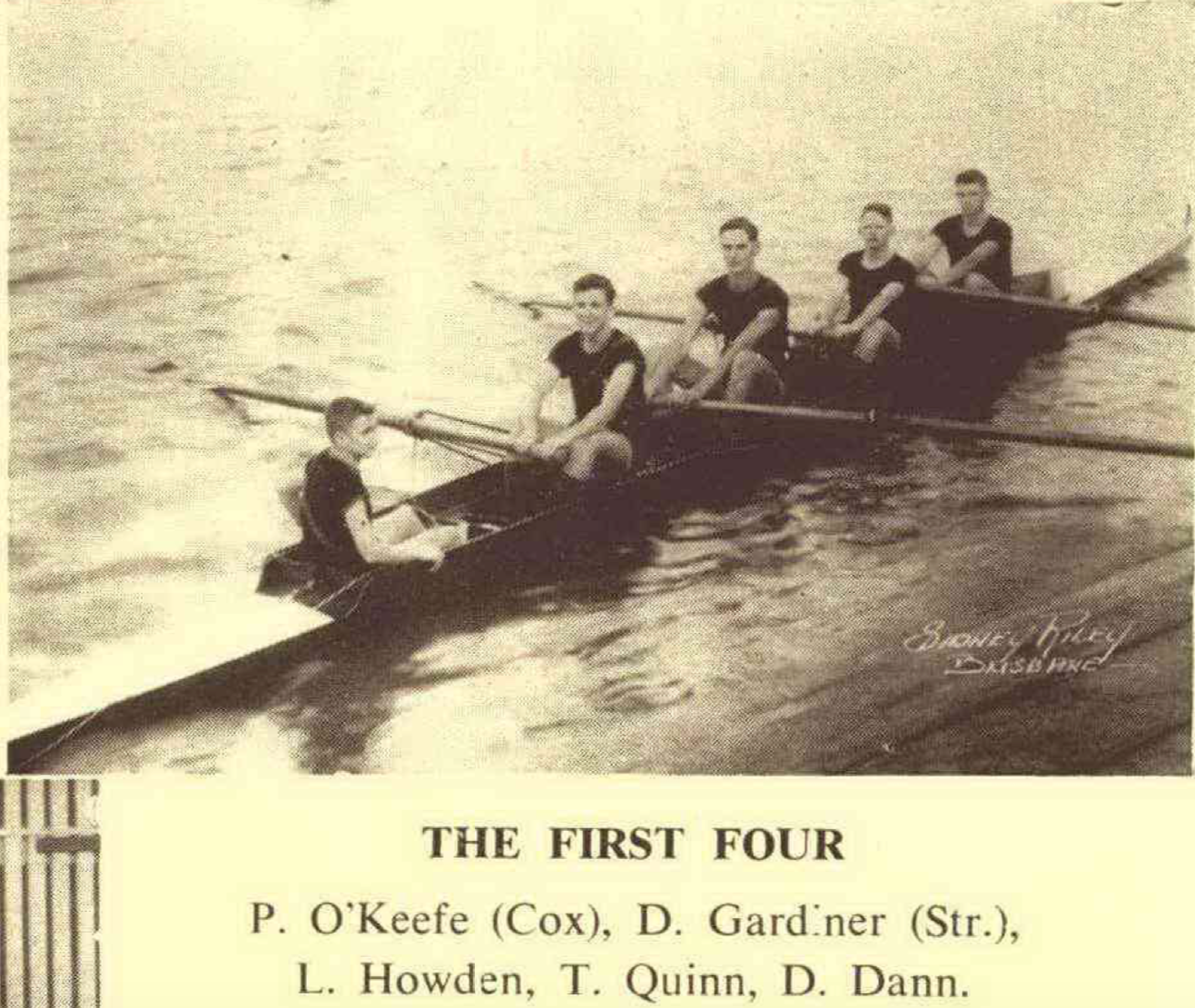 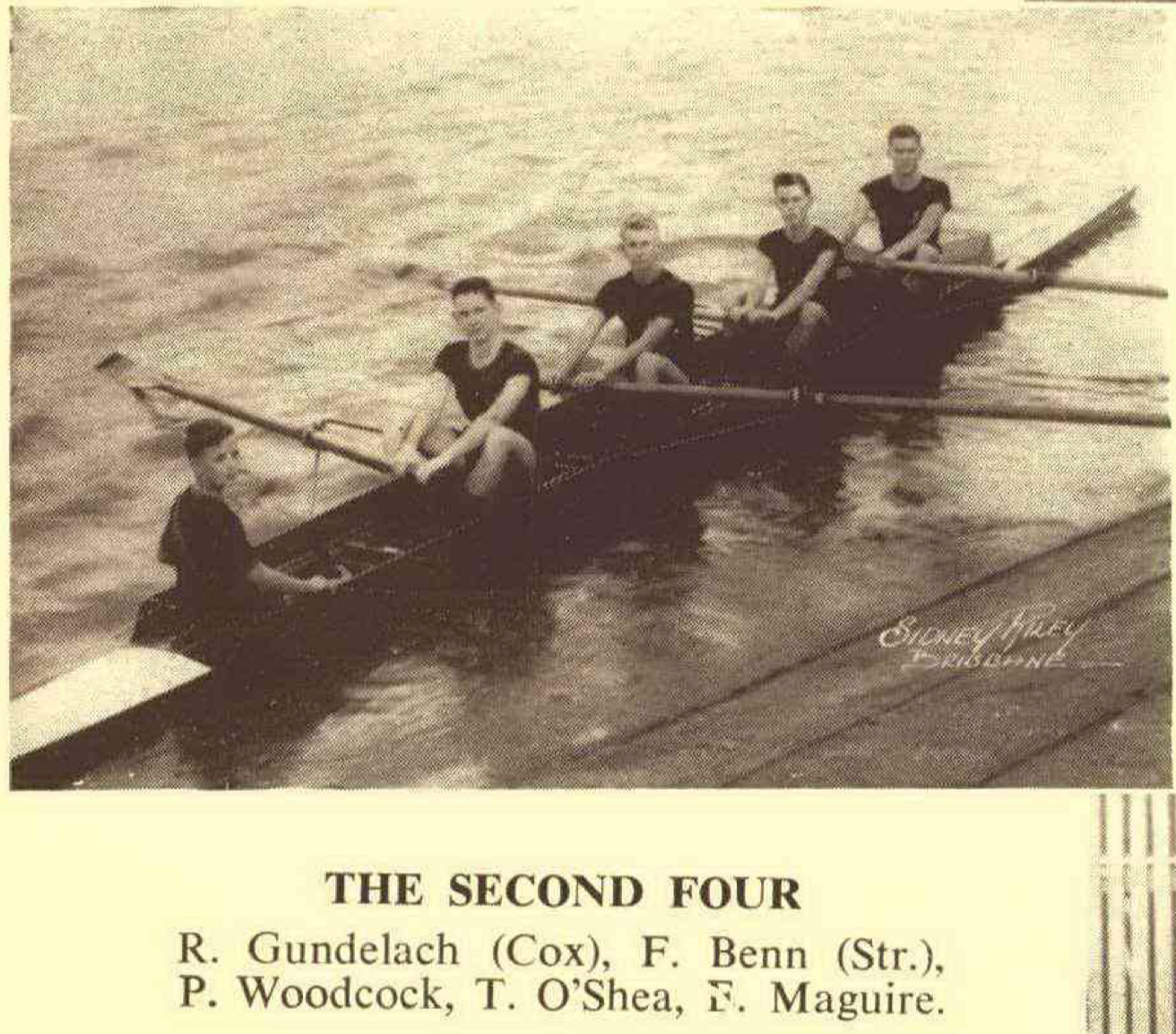