The 1950 Head of the River was conducted on Saturday 15th April 1950 on the Toowong Reach of the Brisbane River.

A new course was initiated for the 1950 event. The championship race was over a straight mile course, with the seconds over three-quarters of a mile and the thirds half a mile. The new starting point was adjacent to the Australian Chemical Company at Montague Road, West End.

The decision to alter the course followed criticism of the old site, which had been considered unsatisfactory by experts since it was adopted by the G.P.S. Association in 1930.

According to the Queensland times:

"B.B.C and C.E.G.S are the only Queensland school with good fleets. The others will have to race either in borrowed racing shells or ones that have been patched, The purchase of boats is quite an expensive business and consequently, this branch of sport in Queensland schools has not received the attention it deserves." (Page 3, 13th April 1950)

Brisbane Boys' College and Church of England Grammar School were the only competing crews with good fleets. The others rowed in borrowed racing shells or ones that had been patched.

"The purchase of boats is quite an expensive business  and consequently, this branch of sport in Queensland schools has not received the attention it deserves." (Queensland Times, Thursday 13th April 1950 Edition)

With Church of England Grammar having made a late change in their crew for the Head of the River due to their bow oarsman coming down with illness, Brisbane Boys' College were heavy favourites. Their victory was by no means a foregone conclusion, yet despite the tight finish, the College won their fourth O'Connor Cup in five years.

In 1970, Anglican Church Grammar School commemorated Pat Fleming who was the school's Rowing Master in 1948-1950 after stepping into the breach left by the departure of J. A. Thompson and M. A. P. Mattingley in the previous two years. Pat remained a staunch supporter of rowing in the school particularly with the School regattas on Humbug Reach during the 1950s. The regard for him was apparent in that the boat bearing his name was acquired by subscription from a large number of old boys were listed on a brass plaque that was fixed to the sneak (Just in front of the bow rower.) 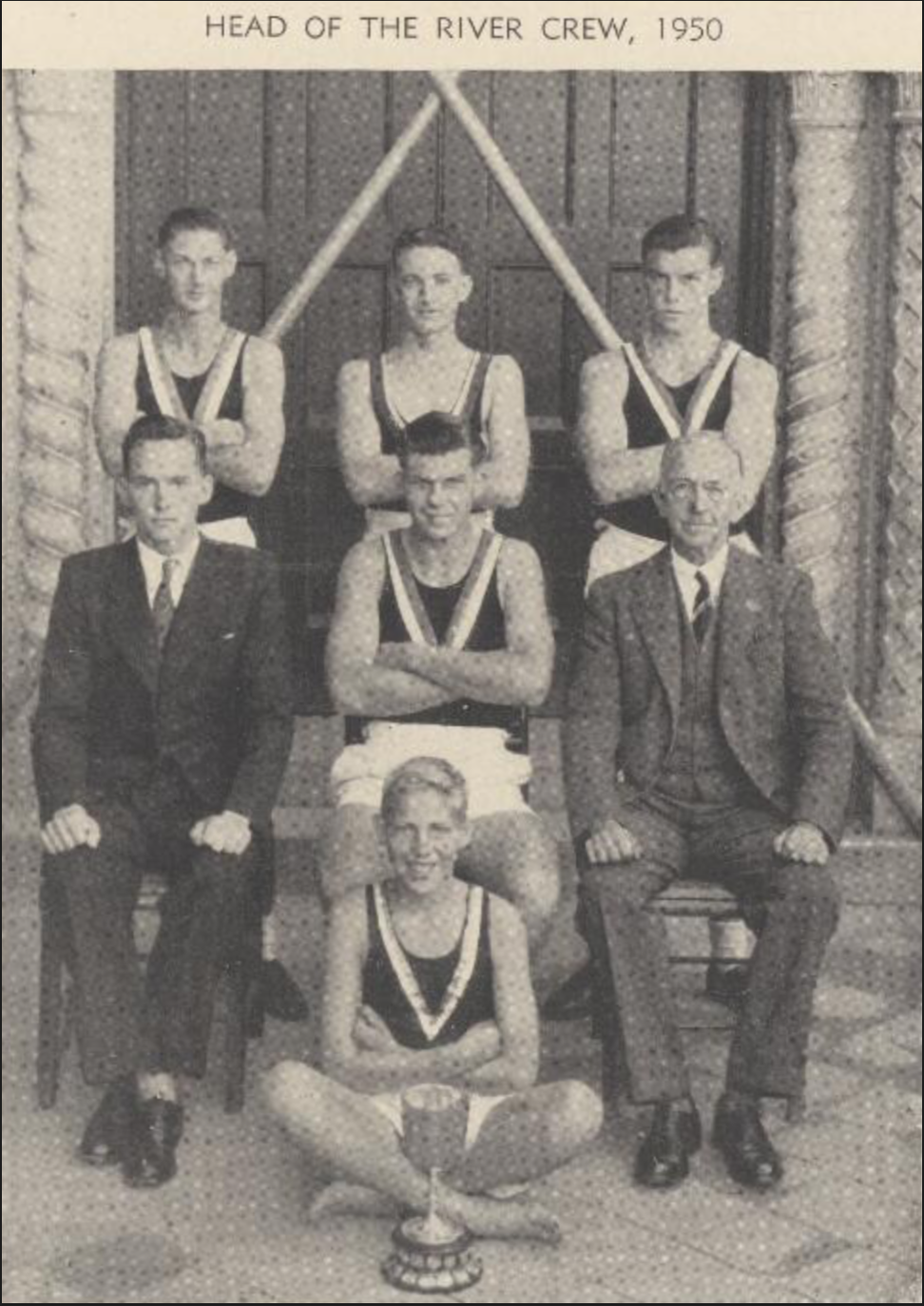 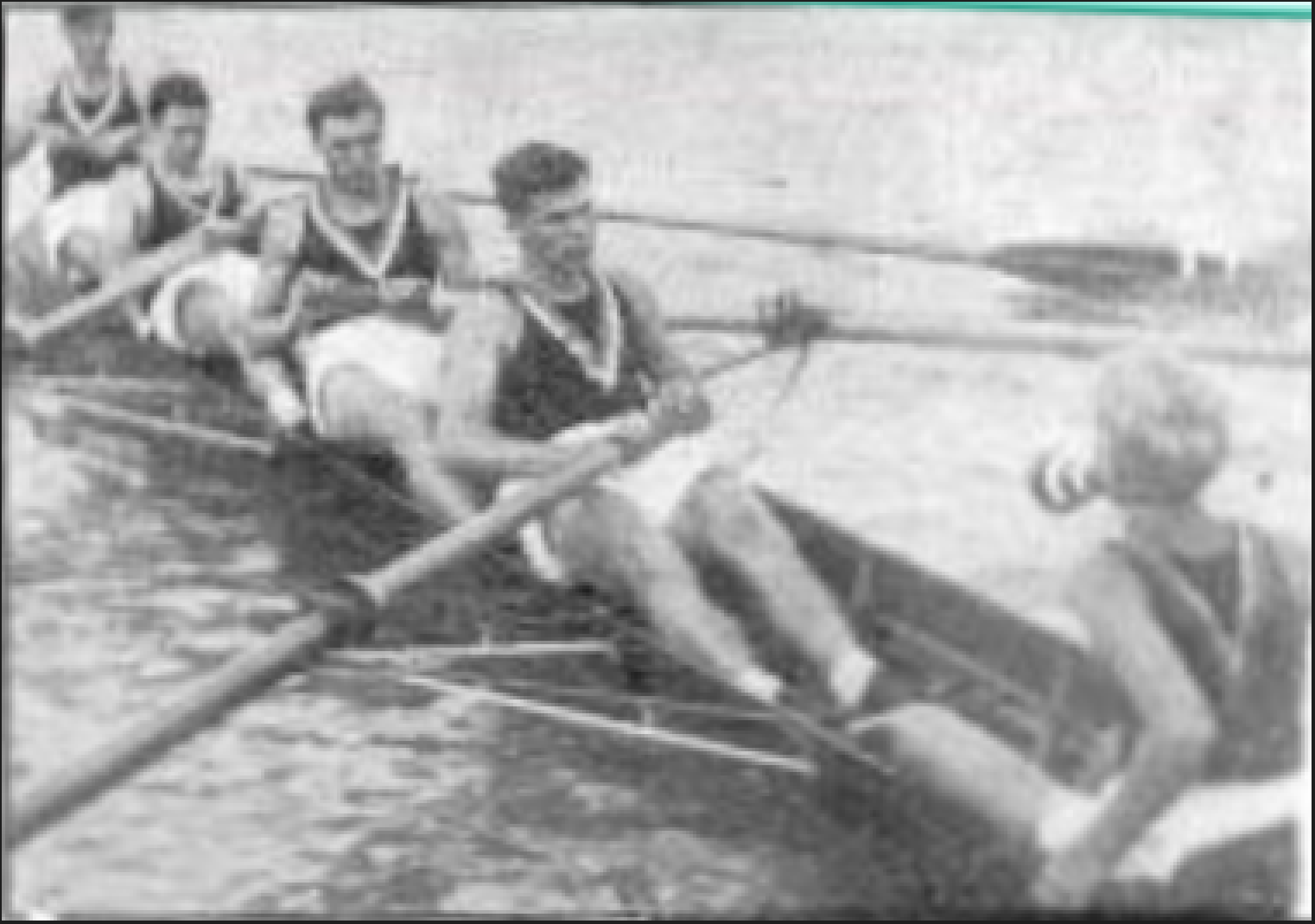 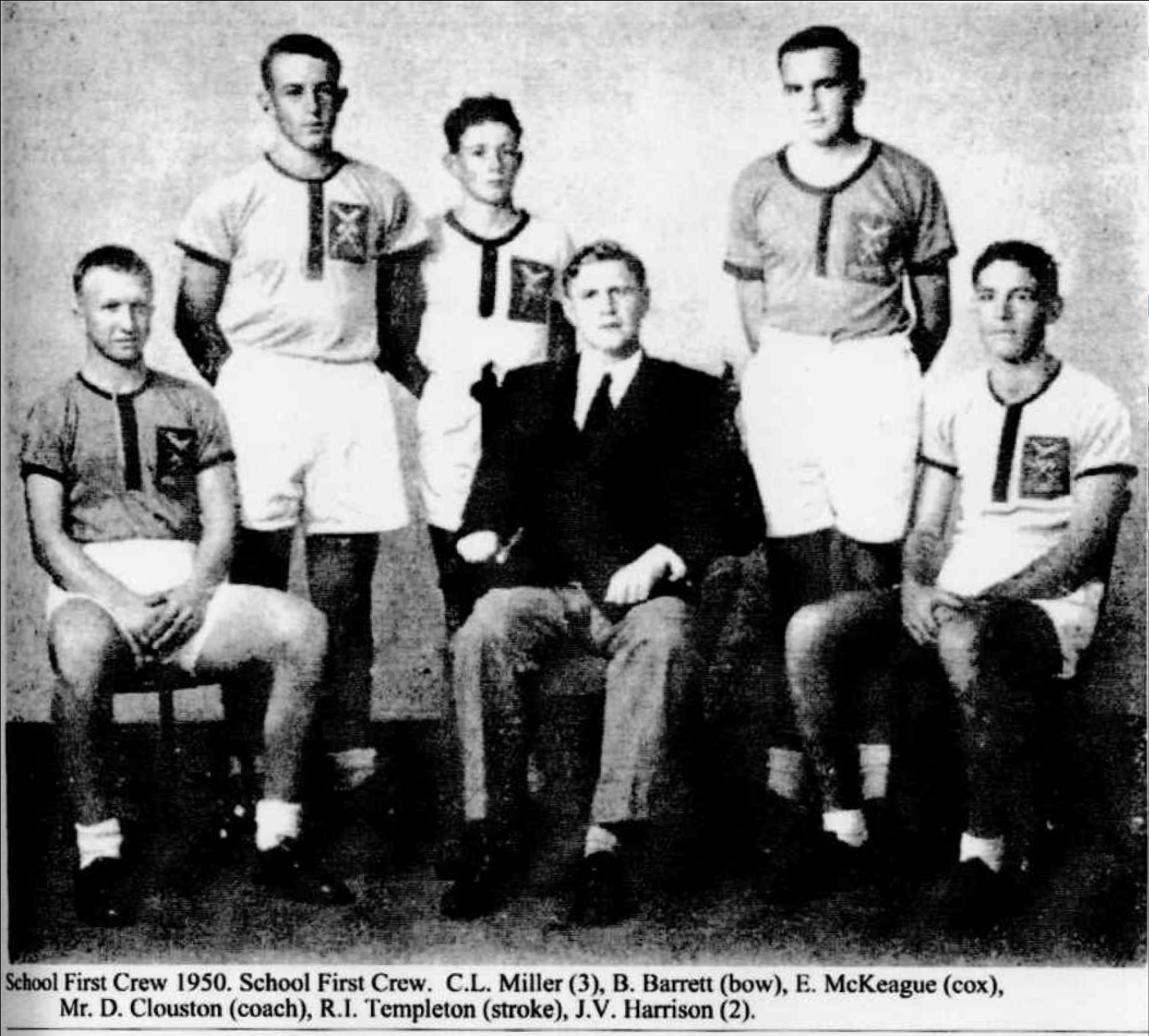 Conditions were fair for all crews but a cross wind made the water slightly choppy.

All crews were level after the start and they kept that way for the first half mile of the course. Then B.B.C., B.G.S., B.S.H.S., and T.S.S. pulled away with C.E.G.S. dropping back. the boats were becoming bunched now as the C.E.G.S. crew were forcing the T.S.S. crew over on to B.B.C. and B.S.H.S.

The four crews rowed stroke for stroke for the rest of the course. Southport making a strong finish, drew up to the leaders. At the finish it was difficult to pick the placings. However, the judges gave the decision to B.B.C., as winners by two feet from B.S.H.S., with B.G.S., third by three feet. Thus B.B.C. were the rowing premiers for 1950."

“The five crews kept together for the first half of the mile course. Then B.B.C, B.G.S, B.S.H.S and T.S.S pulled away together, with C.E.G.S dropping back. The Four crews rowed stroke for stroke for the rest of the course. Southport dropped out near the finish and spectators could not pick the winner from Brisbane Boys’ College, Brisbane Grammar and State High.

Veteran Lance Trout , gave the placings as B.B.C. first by 2 feets from B.S.H.S with B.G.S three feet further away third. Any of the three crews could have won if the race had been further…. Feature of the race was was the complete failure of C.E.G.S. They were second favourites before the race but last minute changes in the crew evidently broke up their combination…. Brisbane Boys’ College have now won the Head of the River six times and for another year they will be the premier rowing school.”

It was a triumph for brothers, Alex and Alan Moore, who were stroke and three for B.B.C. Sixteen-year-old Alan was in doubt for the race until a few hours before the start. He had a painful boil on the buttock which looked as though it might keep him out of the race.

But Alan decided otherwise. Alex was in the B.B.C. first crew last year, which at the last minute was withdrawn from the Head-of-the-River and had the B.B.C second four substituted in its place. Ever since he has been one of the keenest on training and most determined to win the 1950 Head-of-the-River.”

"C.E.G.S. got away to a good start and led all the way to win comfortably by four lengths from B.B.C. B.B.C. rowed a good race, but the opposition was too good. T.S.S. filled third position. The time for the race was 4 minutes 44 seconds." 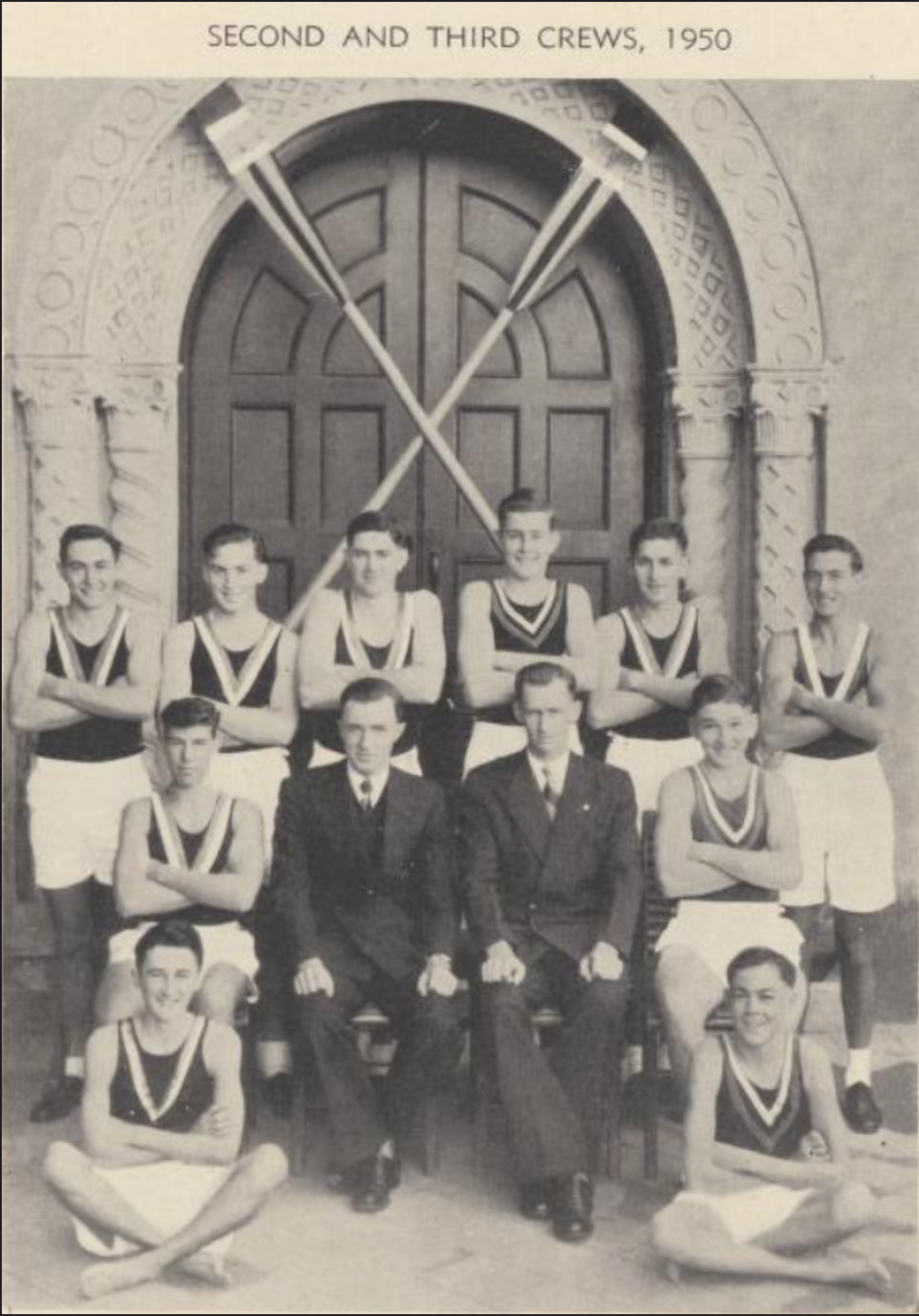 "This was the last race of the day. B.B.C. had a young crew with plenty of racing spirit. They were strongly challenged by C.E.G.S., but succeeded in winning from C.E.G.S. by half a length."