The 13th Head of the River was conducted on Saturday 5th May 1934 on the Milton Reach of the Brisbane River. Both races would be over a three-quarter mile course from Davies Park jetty to a point opposite Morrow's factory.

Great anticipation surrounded the 1934 event with one reporter from the Telegraph reporting the day before that the "supporters of the five rowing schools promise to monopolise the banks of the Milton Reach tomorrow afternoon during the course of the annual rowing races. Decked with their colours and giving vent to their weird war cries, boys and girls will be present to urge on their favourites."

The Positions of the crews from the north bank were as follows: 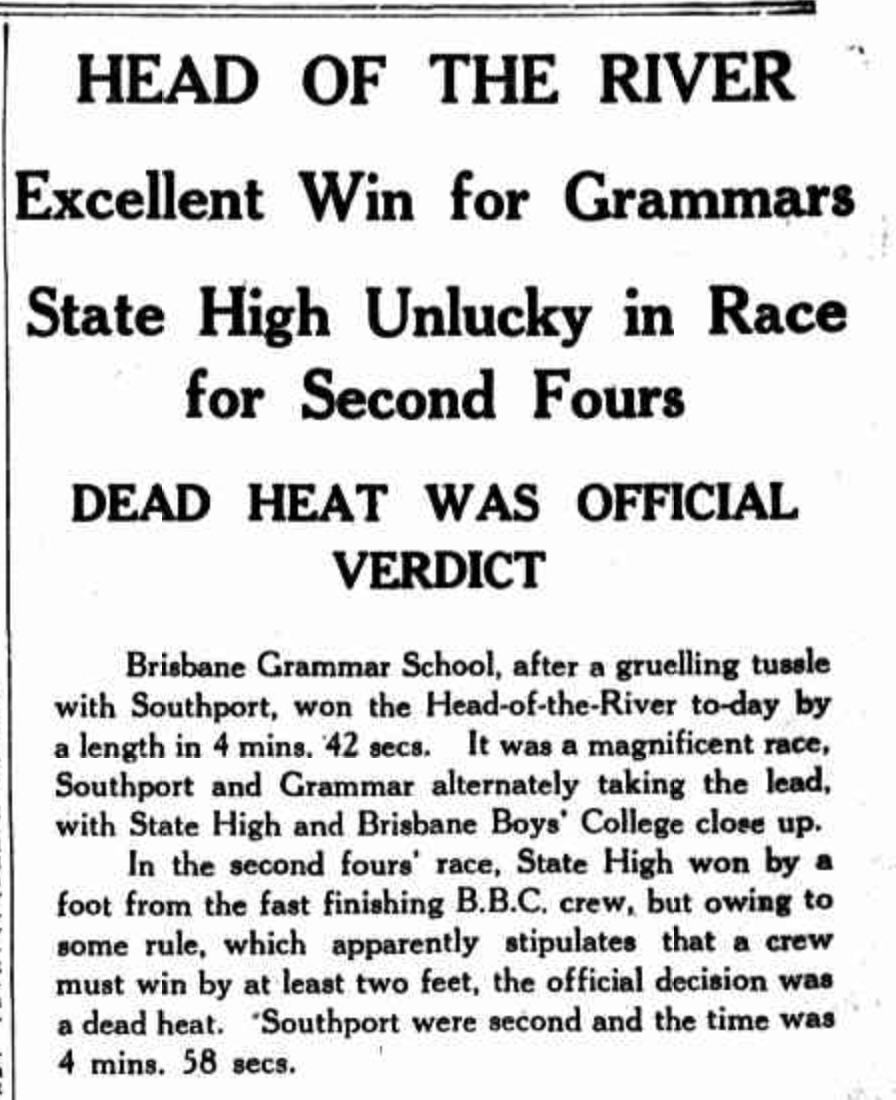 The regatta was conducted by the Queensland Metropolitan Secondary Schools Association. 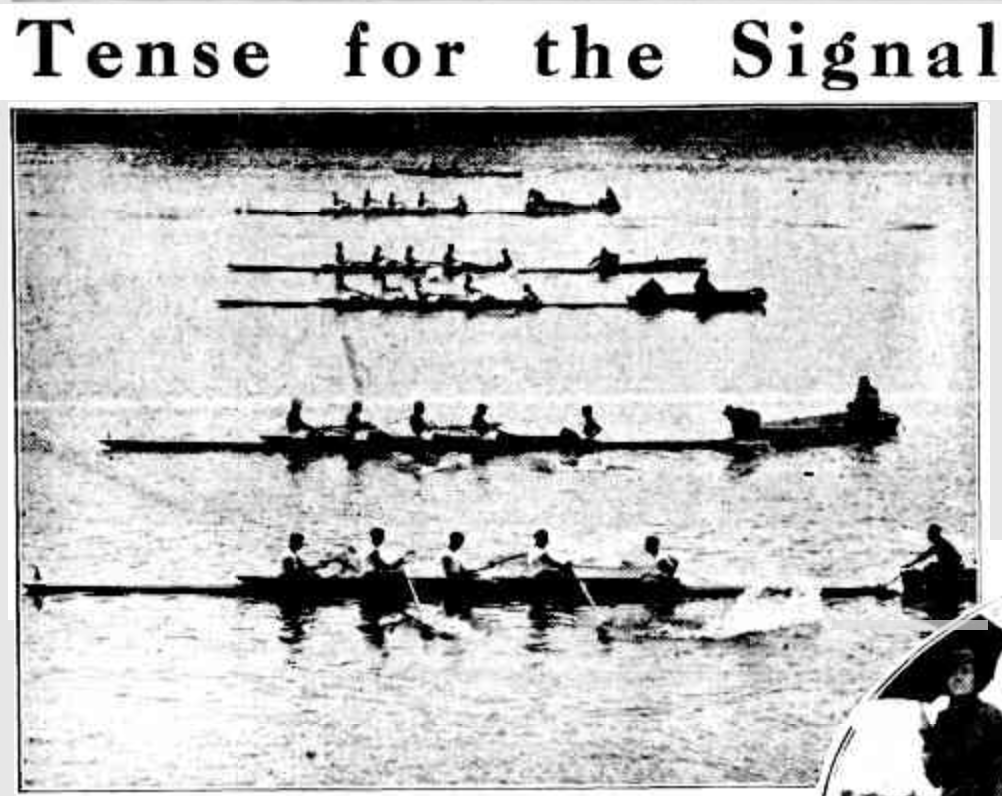 Caption: A departure from the accustomed method of starting was observed in the Head of the Brisbane River race on Saturday. The Boats were held by the rudders from the moored punts until the pistol signal. 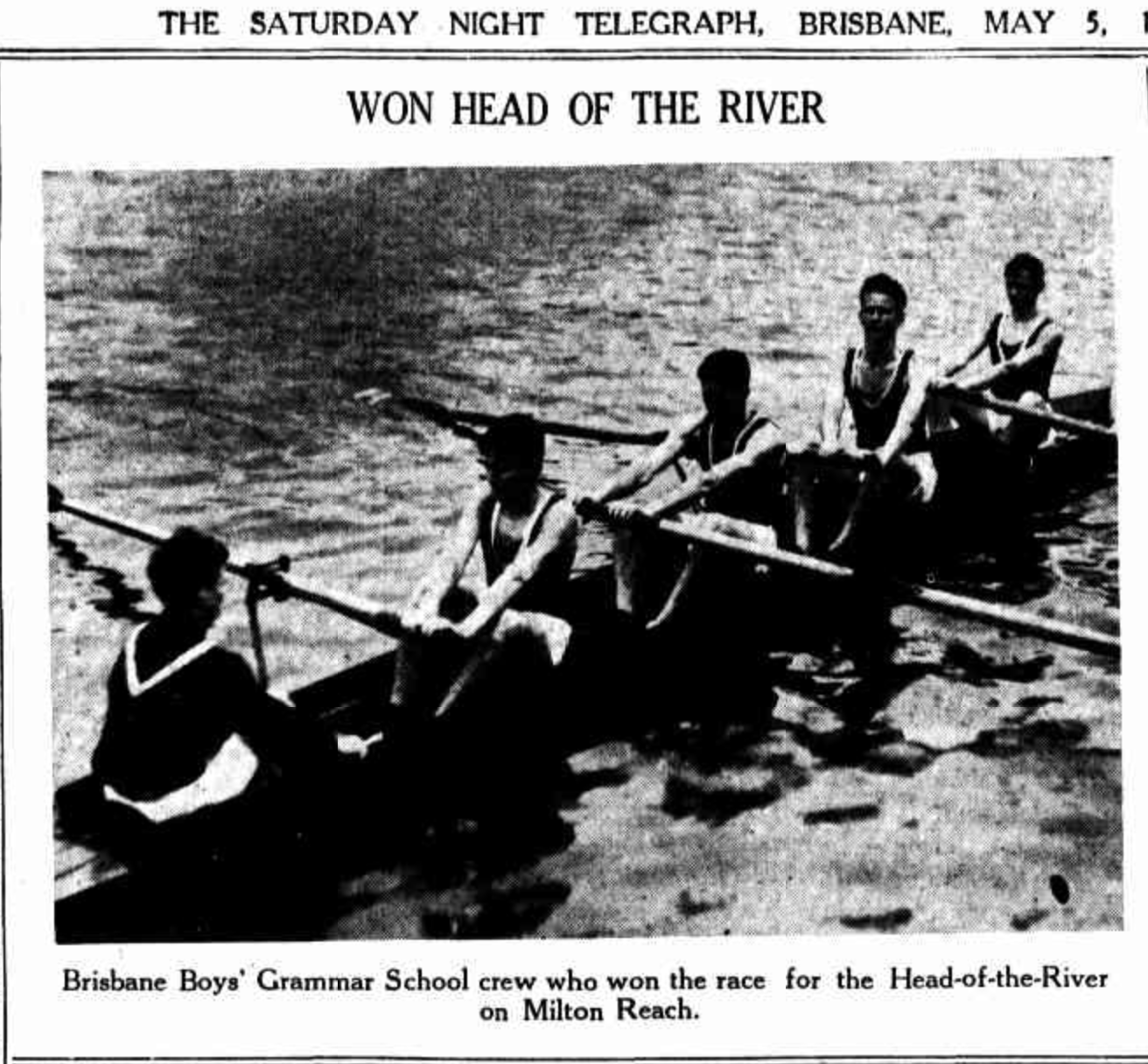 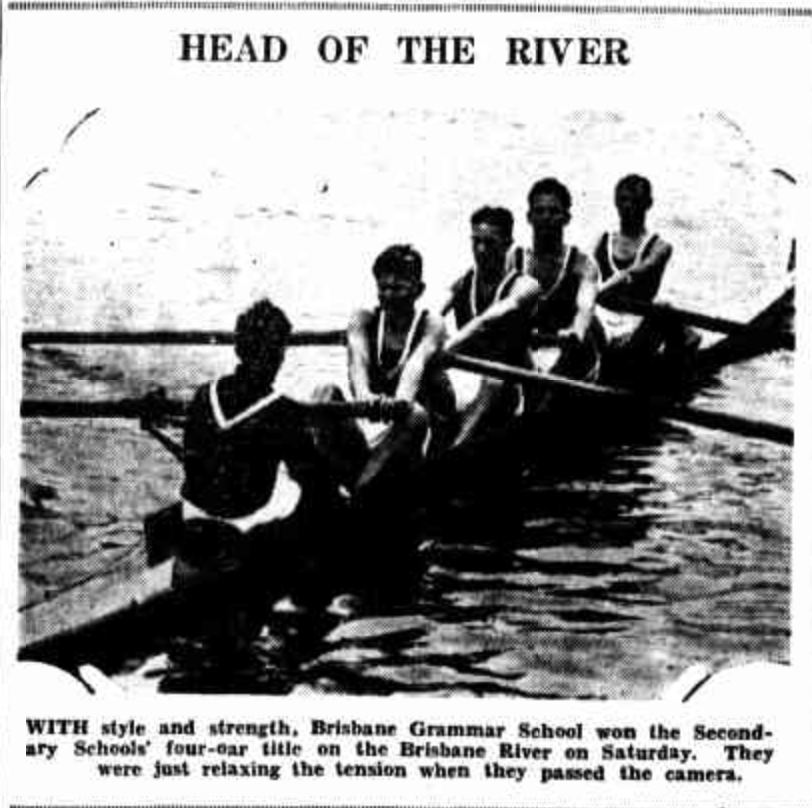 “The crews hit the water well together, Southport getting to the front early from State High and Church of England Grammar.

Every crew was hitting a heart-breaking rating and they kept it up for a very long first burst. During this Southport, State High, Church of England Grammar were fighting it out, with Grammar a little further back. Southport then took the lead, and the crews slowed down considerably, State High was about half length further back, a little in front of B.B.C. while Church of England Grammar, rowing roughly, had dropped back.

Then Grammars came into the picture. They were hitting the water together at a bright rating and from the outside came up on B.B.C., passed them, drew level with State High, passed them and then tackled Southport.

A gruelling struggle followed, with Grammars taking the lead. Southport challenged them, but were repelled the first time. Again they came at the leaders and this time passed them. Grammars put in more work and with bulldog tenacity, kept with Southport over a dozen, and again took the lead. Again and again Southport tried to make up the lost ground, but although they at times drew level, they could not get their nose in front.

In the meantime B.B.C.  had passed State High and these two crews were fighting out a hard race between them. Nearing the finish Grammars gradually increased their lead and completely defied Southport. A final effort between B.B.C. and State High saw State High get into third place and almost overhaul Southport. Grammars crossed the line with a length to spare on Southport, while State High was only half a length behind in third place. B.B.C. was a close fourth and Church of England Grammar well behind last." 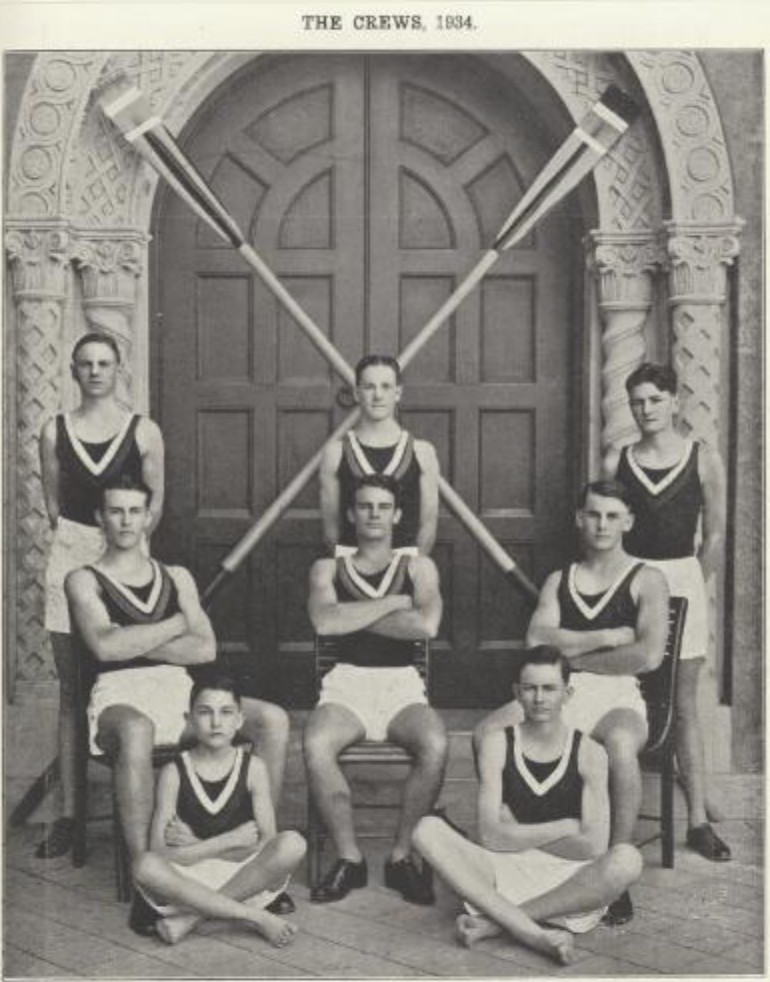 “Mr G. Smoothy had no difficulty in getting the crews away to a good start. Boys’ College however were slow to get going. Grammars hit up a high rating from the start and were very soon in front, hard pressed by Southport and State High , who were rowing powerfully. State High gradually crept up and before long had passed the Southport crew were on the tail of the now slide-rushing Grammars. Boys’ College were about three-quarters of a length behind Southport with Church of England Grammar a canvas further back last.

As they weakened, State High seemed to strengthen, and with a fine burst came to the front, half a length clear of Southport. Southport digging in their heels, made a bold challenge, but were staved off. Then when the Chemical Works were passed, Boys’ College, who had seemed to pass Southport. But that was not all, they slowly but surely began to make up the leeway on State High .

With not very far to go, they crept to the front, but State High who had been rowing a fine race, put in a mighty finishing effort and passed the line with a foot to spare, the judge did not give his decision immediately, but after a conference with officials on the rule which stipulates that a race must be won by  two feet at least or be declared a dead heat, he officially declared the race a dead heat.

Southport, who felt the effects of the hard early stages of the race rowed in third about a length away, followed by Grammars and Church of England Grammar. Grammars’ early effort had been too much for them.”