The 6th Head of the River was conducted on Saturday May 14th 1927 on the Bridge Reach of the Brisbane River.

With their new rowing clubhouse recently erected in the Domain next to the University's, The Great Public Schools Rowing Club, only 18 months old, hosted their inaugural event: the 1927 G.P.S Regatta and the first race on the programme was the All Schools' Championship Fours. This was between crews from five schools and their positions were as follows:

The 1927 Head of the River would run over three-quarter of a mile beginning at the Commercial Rowing Club and concluding at the new boat shed of the G.P.S. Rowing Club in the Domain.

Scenes of great enthusiasm punctuated every vantage point along the course on and off the river with more fortunate spectators finding themselves on the various motorboats charted by the schools. The finishing line would thus reach fever pitch as the schoolboy rowers from Brisbane Boy's College, The Southport School and Brisbane State High School fought desperately to take home the O'Connor Cup and do their supporters proud.

The officials for the race were as follows: 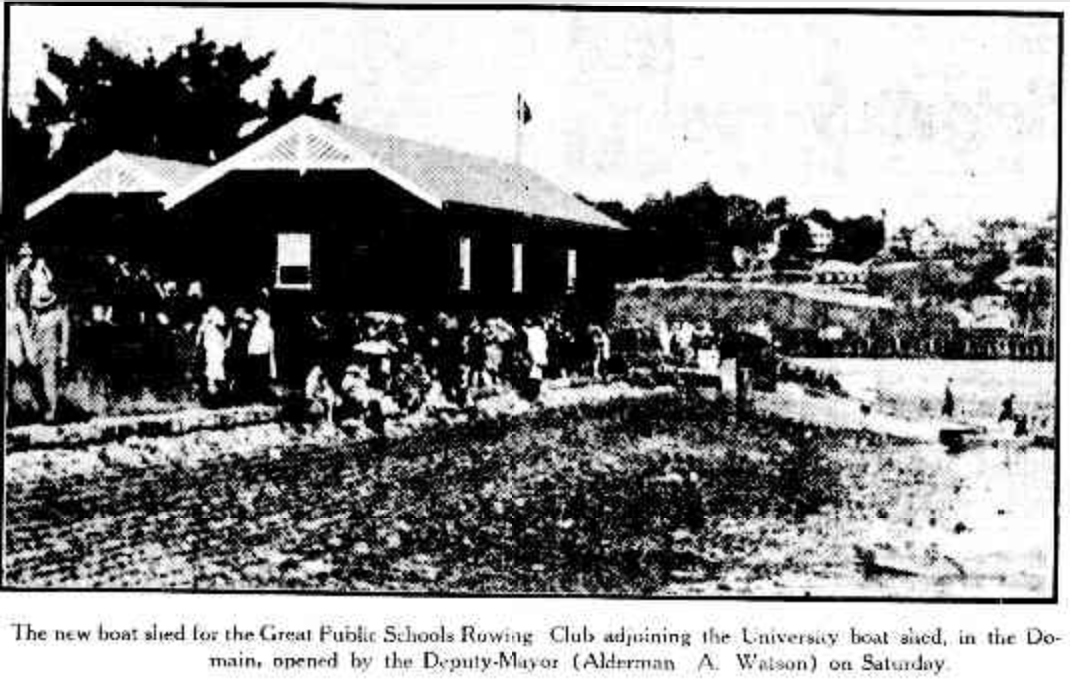 Caption reads: The new boat shed for the Great Public School Rowing Club adjoining the University boat shed in the Domain opened by the Deputy-Mayor  (Alderman A. Watson) on Saturday.

Conditions could not have been better, with the race rowed on the last hour of an ebb tide and consequently there was not much run on the stream. The weather was warm, one of those bright sunny days that has historically made Queensland a famous winter paradise.

The crews alone made a beautiful picture, with their vari-coloured costumes and gaily painted oars dipping rhythmically in a river smooth as class. School colours were displayed everywhere.

It was Brisbane State High School who took home the O'Connor Cup after being touted as favourites on account of their strong performance against senior crews at the Commercial Regatta a week prior, where they defeated the Church of England Grammar School by 5 lengths.

Brisbane Boys' College were the heaviest crew and had fine-tuned their blade work in the weeks leading up to the Head of the River. Southport had arrived in Brisbane on the Wednesday before the contest and conducted a 3/4 mile time trial in 3:42.00 which was 10 seconds better than Brisbane Grammars efforts on the same course the following day.

With all crews well prepared, a terrific struggle across every inch of the course ensued. 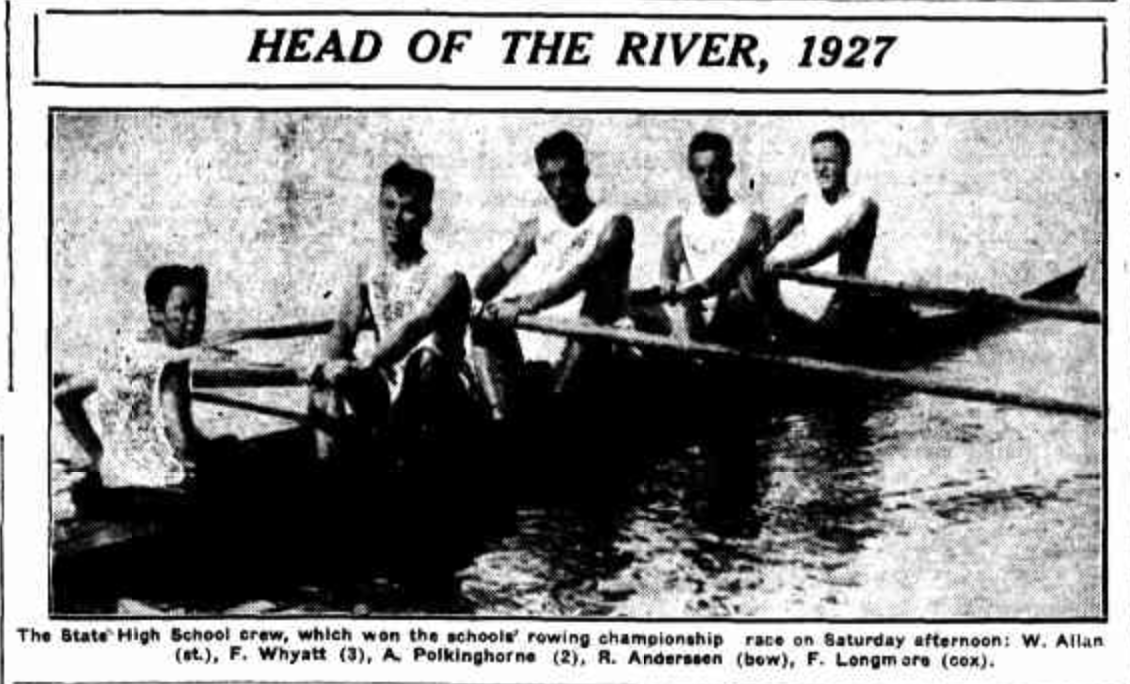 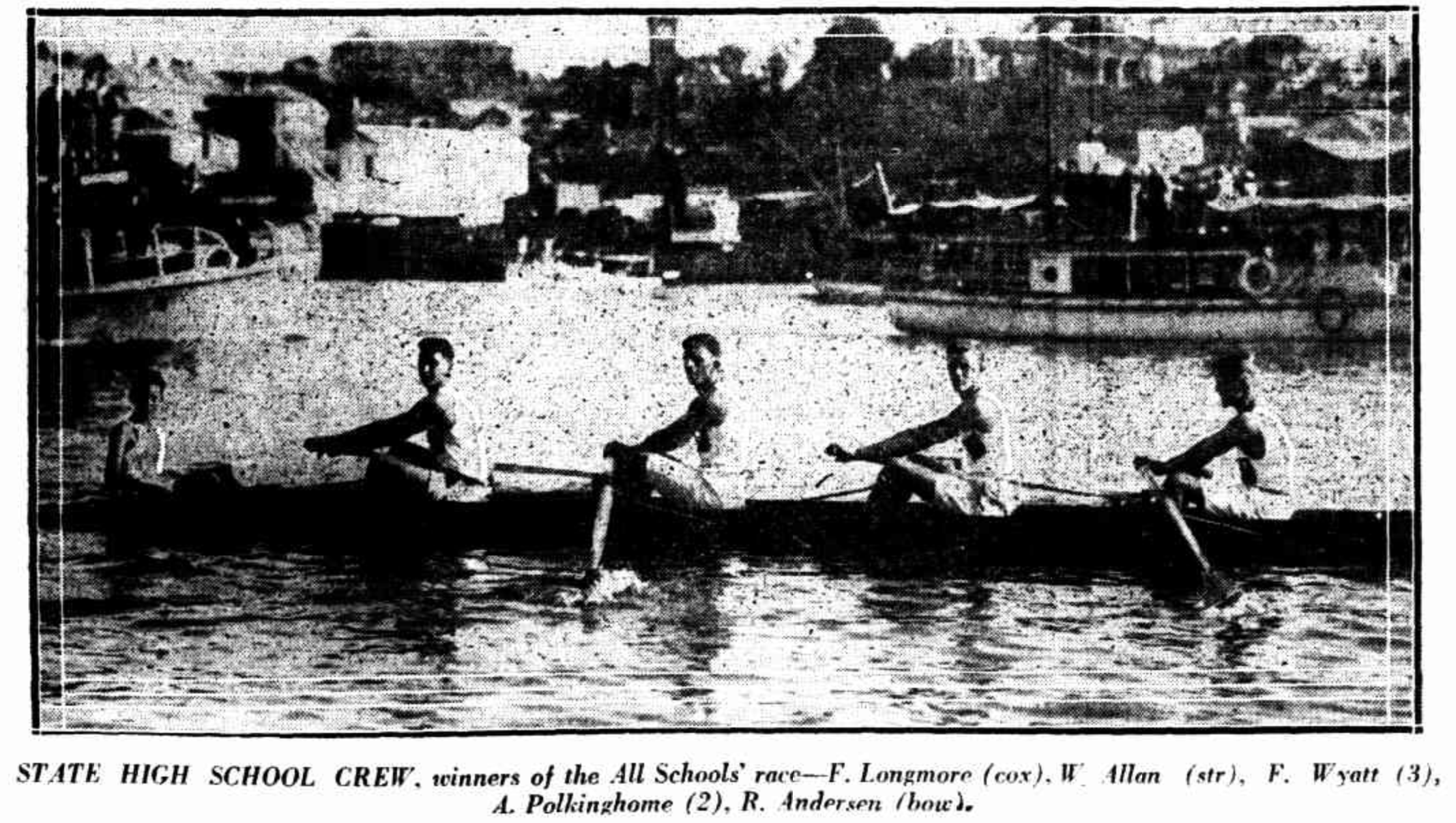 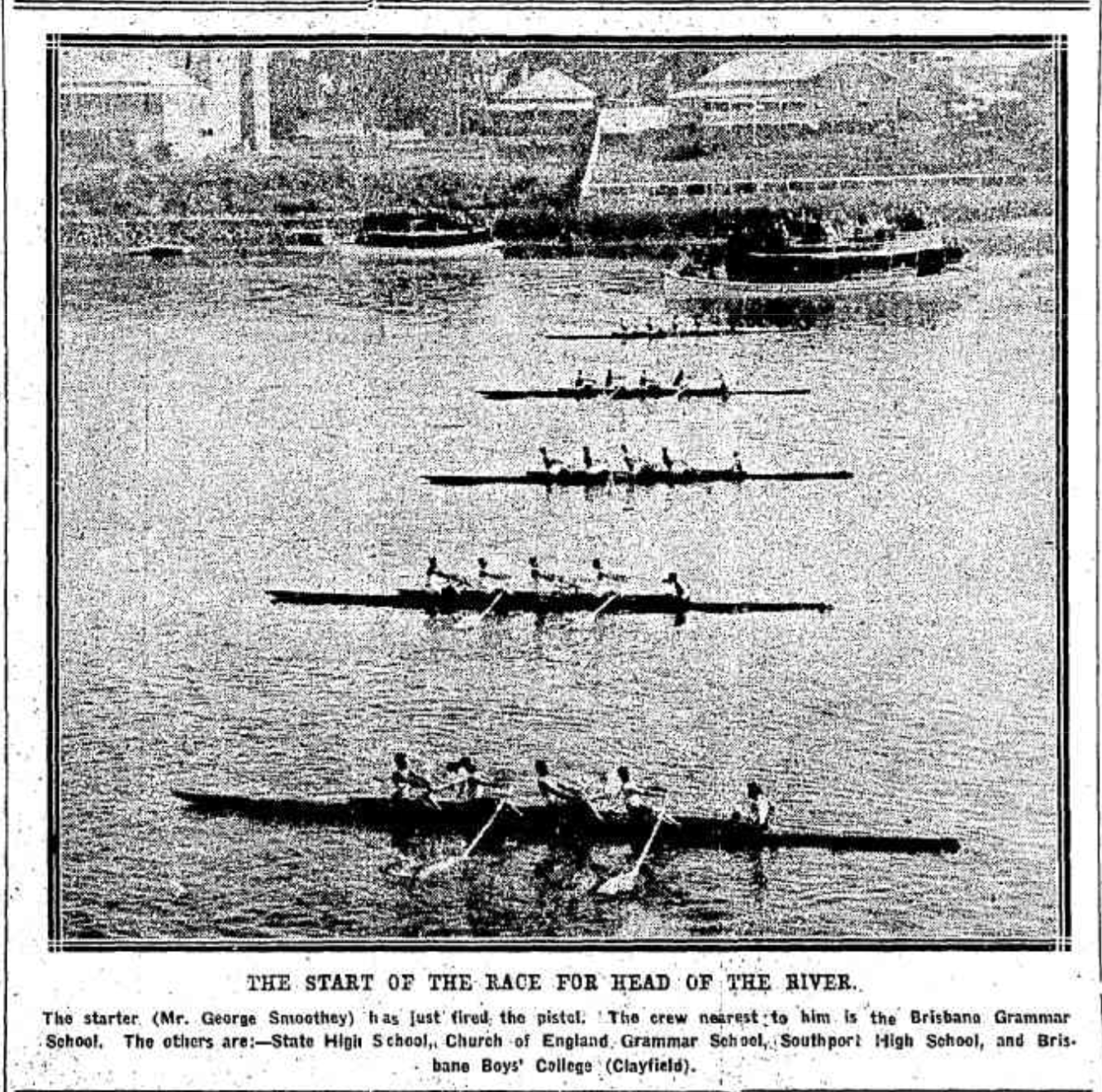 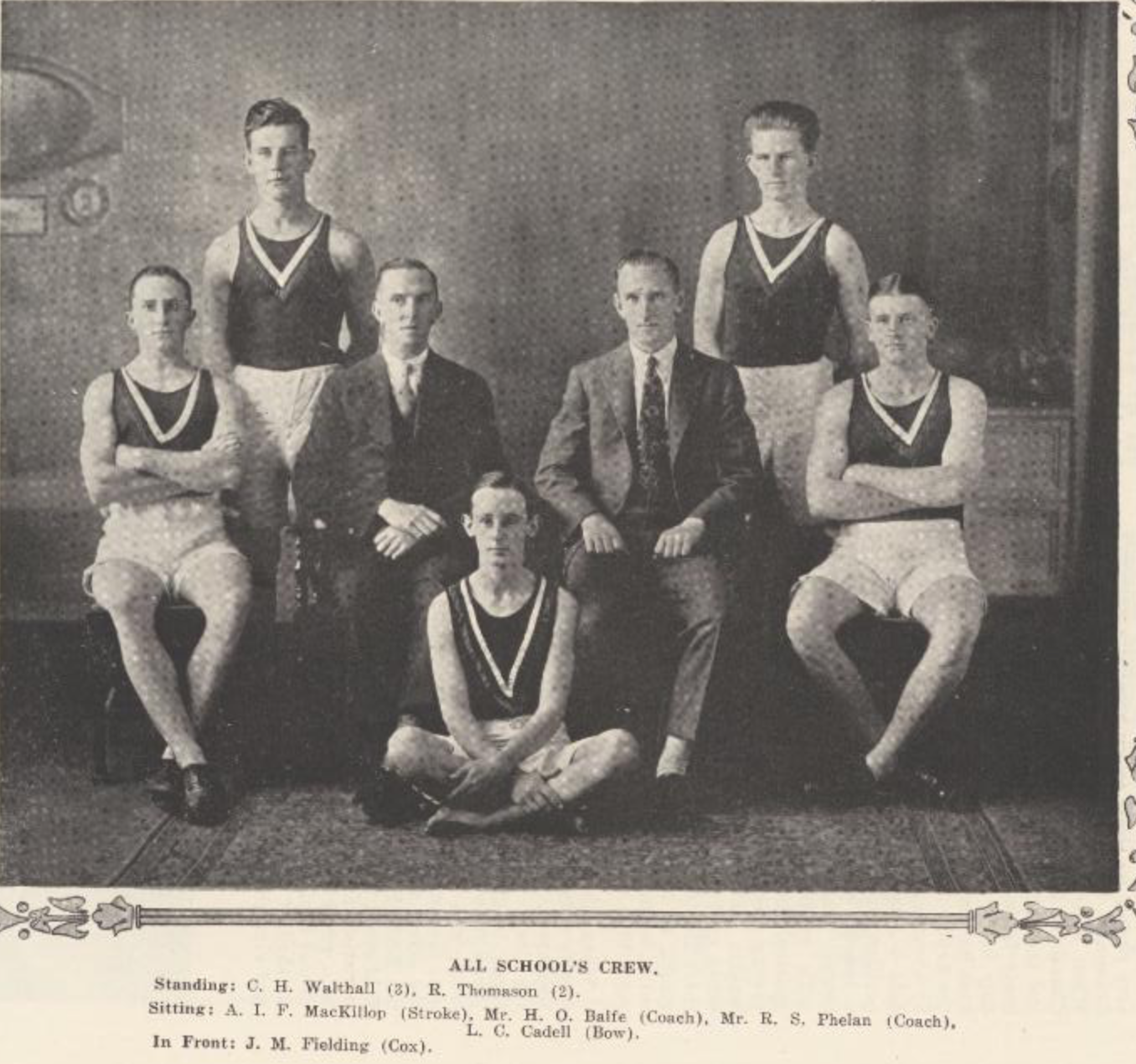 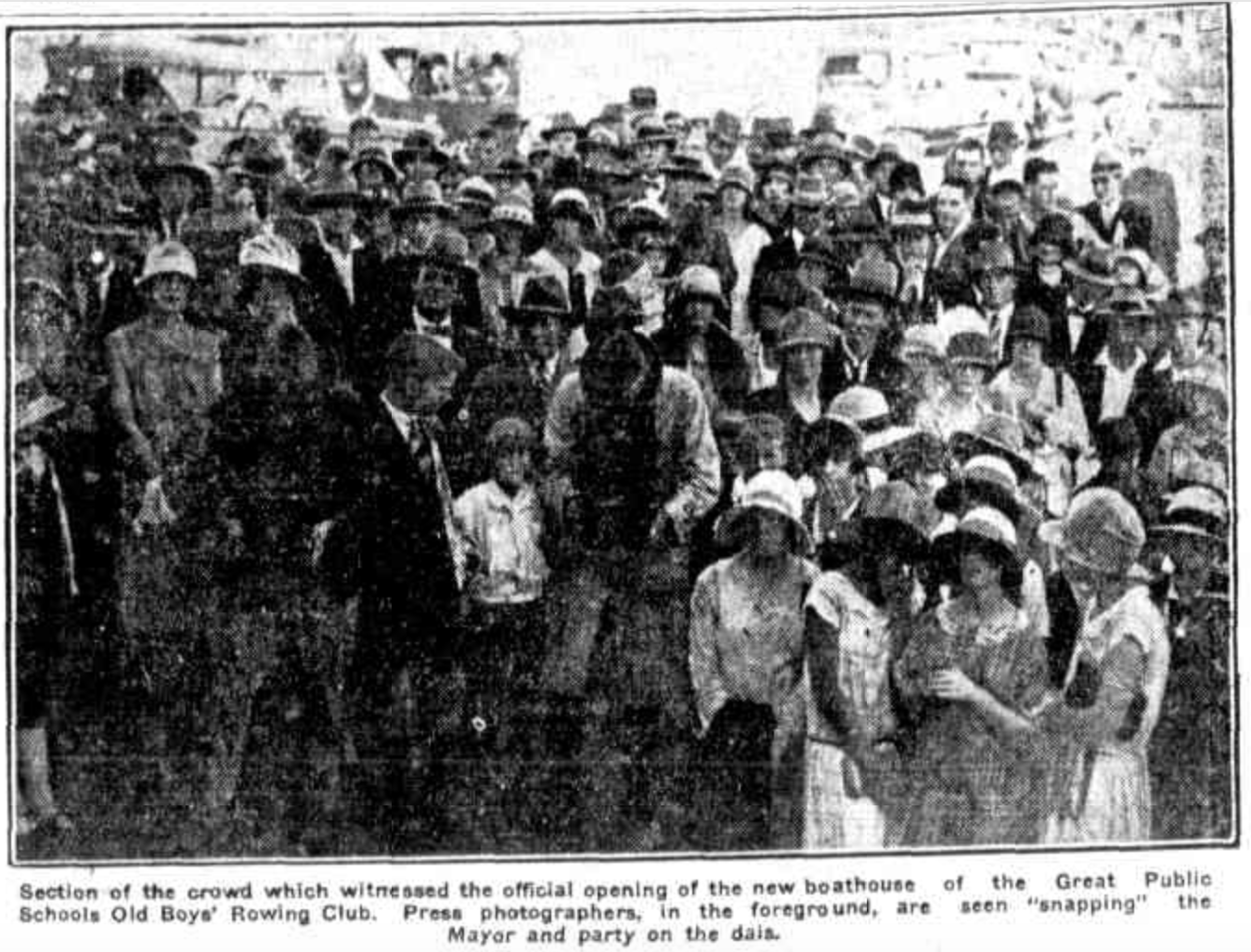 Mr. G. Smoothey got the crews away well yet tragedy struck early for Church of England Grammar School whose number 3 seat lost his slide in the first dozen strokes forcing their withdrawal. Churchie had launched an appeal for a restart but this was declined with the rules providing that a restart may only be granted if an oar breaks in the first half minute.

As such, the race boiled down to four crews and in the first hundred yards little separated them. State High School, rating 44 strokes a minute, narrowly led Southport and College both stroking 40 with Brisbane Grammar only a canvas away fourth at 38.

Approaching the Victoria Bridge, only a length seperate first to last place. As they shot through the bridge, State High School put in a dozen strong strokes to push their lead to half a length, their rating of 36 superior to College's and Southport's 34 with Grammar falling of the pace at 32.

Emerging on the other side, College made the most of their higher weight class. Rowing with great power and clean blade work, they reduced the deficit with State High School. Southport responded in a similar fashion which would set up a tight finish of what had practically become a three horse race.

Passing the Adelaide Steamship Company's wharf, High School began to assert themselves, rowing with a brisk snappy strokeand  maintaining a faster rating than their rivals. Though Southport and College were hanging on fiercely. When level with Brown's Wharf, 200 yards from the finish, State High led Clayfield and Southport, who were neck and neck, by half a length.

When 50 yards from home, Southport, rowing magnificently with a splendid body swing and strong leg drive, made a desperate effort to reign in State High School. The heavy Clayfield crew, rowing with great power, determination and in excellent combination, put in a exhilarating final dash of their own.

State High School though, rowing a most determined race, stalled of their relentless pursuers in a stirring struggle to take victory by three quarters of a length, much to the adulation of their supporters.

The umpire, Mr. C. Grimley, declared a dead-heat between College and Southport in what was a fitting tribute to such a tight race where the three leading crews were never more than a length apart throughout. Brisbane Grammar crossed the line 2.5 lengths away fourth.

Testament to State High School's supreme stamina, the very same crew would win the Under 20 Fours event in the G.P.S. Regatta on the same afternoon by 2.5 lengths. Southport's crew also competed and came a gallant third.

It was a memorable race, an exciting contest from start to finish.