The 10th Head of the River was conducted on Saturday 2nd May 1931 on the Milton Reach of the Brisbane River.

According to The Sunday Mail:

"“Weather conditions were perfect for the contests, which were held on the Milton Reach of the River which offers an ideal stretch of water in which no crew has any advantage over any other. The course was from Davies’ Park wharf to Morrow’s factory, a distance of three-quarters of a mile. A great crowd lined the banks along the course while many motor cars laden with enthusiasts followed the races along River-round."

The Officials for the event are pictured below:

"As the boats lined up for the start the difference in physique of the crews was most marked. Southport averaging 12st 4lb had the three heaviest men in the race. L. E. Powell looked a veritable giant compared to Plumb (9st) bow in the State High's four which averaged 9st 13lb" 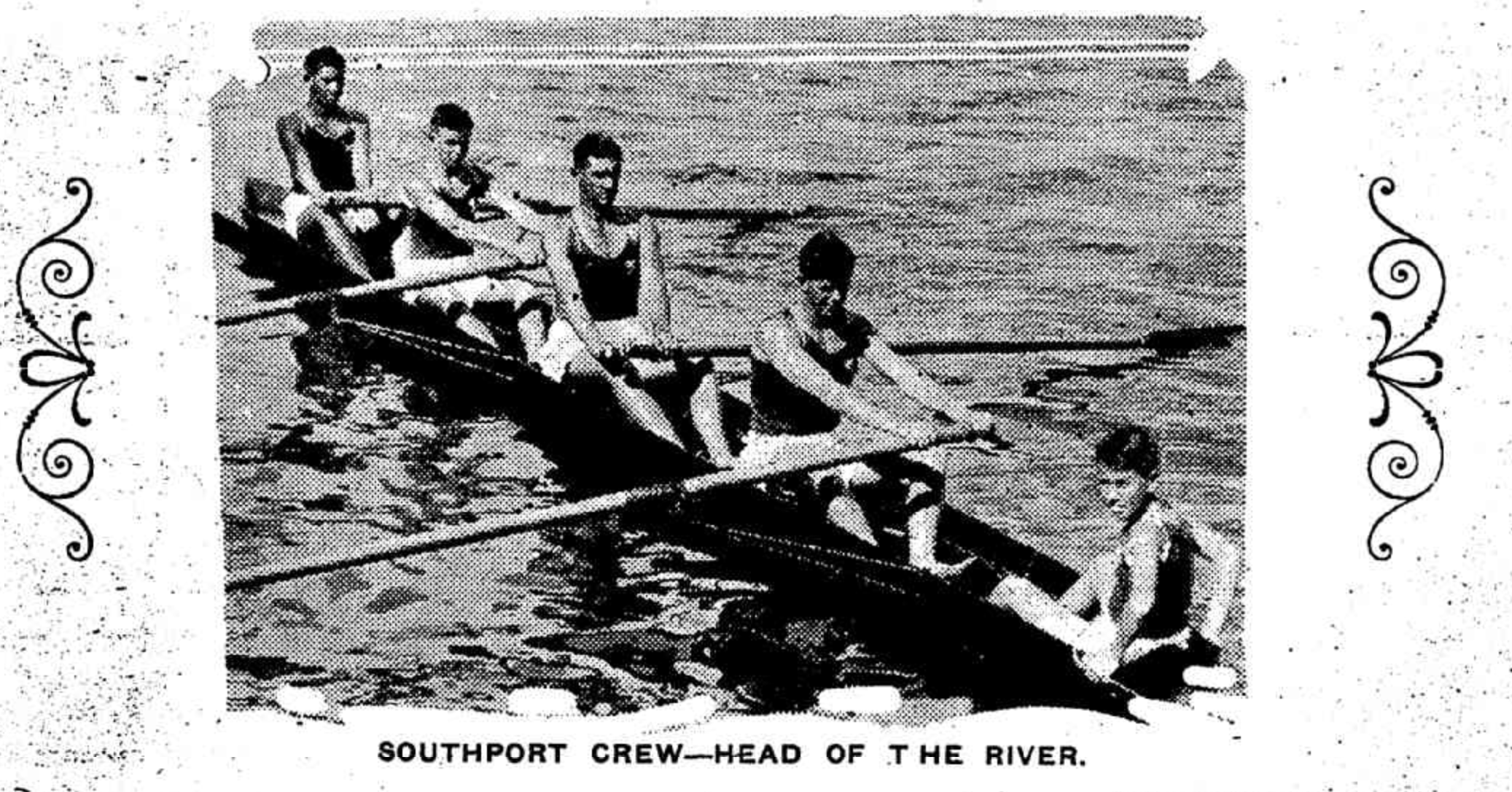 “They went away to an even start, Brisbane Boys College, Southport and State High School moving up quickly. The bow in the Brisbane Boys’ College Crew lost his slide and the crew dropped slightly back, but it was only a momentary failing, the crew being almost immediately up near the front again. Brisbane Grammar then came up with an amazing dash. Rowing at a rating that must have been near 40 strokes to the minute, they leaped to the front and in 100 yards had a clear length’s lead on the other crews who were all within a foot of each other.They kept this gruelling pace up for a quarter of a mile, when they were two lengths to the front. By this time they were beginning to show signs of fatigue and the other crews came up slightly.

Southport and Brisbane Boys’ College were rowing stroke for stroke, the lead alternating every few strokes. State High were about a canvas behind them with Church of England Grammar School a little further back, last. About half way over the course Southport, were rowing very powerfully, and with a steady rating, came up almost level with Grammars. Grammars were tiring, but with a valiant effort they brought the rating up and went to the front again. The effort was too much and the heavy Southport team, quickening their rating, took the lead.

Brisbane Boys’ College and State High were fighting every stroke until the last quarter of a mile, here the Boys’ College, who were also rowing with power and ease, made a fine attempt to take the lead. They left the State High School crew behind and rowed stroke for stroke with Southport and Grammars. Over the last 100 yards the crowds on the bank cheered and the issue of the race was only conjectural. The weight of the Southport crew, which averaged over 12 stone, asserted itself and they crossed the line one and a half lengths ahead of Grammars. Brisbane Boys’ College were unable to make up the slight leeway on Grammars and were half a length behind third.”

Page 3, The Telegraph, Saturday 2nd May 1931 Edition via Trove https://trove.nla.gov.au/newspaper/article/186881670?searchTerm=School%20rowing

“Undoubtedly the best crew won the head-of-the-river race on Saturday, The Southport four had a wonderful advantage over all the other crews physically, the men being exceptionally big and in the pink of condition . They rowed a well-planned and sensible race and looked as if they could have taken command at any stage. Brisbane Grammar School gave a fine display of stamina and determination. They rowed like trojans for the first quarter of a mile at a rating and with power that would have cracked up the strongest crew. They absolutely threw away their chances in doing so, but they stuck to the race magnificently, and tried hard to put in a finish. Brisbane Boys’ College were a surprise and the manner in which they rowed over the last quarter of a mile was a tribute to their spirit and to the coaching of Rev. M. Henderson, who made a wonderful improvement in them in the last couple of weeks.”

Before they had gone 200 yards the wash from the Nirvana, which was right alongside them, caused one of the men to get into difficulties and the crew had to stop. This put the out of the race as by the tie they started again they were hopelessly behind.After a quarter of a mile the race became a duel between Grammars and Boys’ College, first one and then the other taking the lead. Church of England were well behind third and Southport were well behind third, and Southport were further back, slightly ahead of State High School.

With 100 yards to go the two crews seemed to be level. They both put in a powerful spirt at the finish and Boys’ College crossed the line only one third of a length ahead of the Grammar Crew. The Church of England Grammar crew was about three lengths away third. The time was 5 mins 5 1/5 secs.”

Page 3, The Telegraph, Saturday 2nd May 1931 Edition via Trove https://trove.nla.gov.au/newspaper/article/186881670?searchTerm=School%20rowing

“The blade work and timing of the winning crew were the conspicuous features of the race. On an average the crew was rating about 30 a minute, while the second crew, at its best was doing as high as 36. The finish as close, and many spectators were in doubt as to the result of the race . The third boat was about two lengths away and the other two were about two lengths close at hand.”

Page 7, The Brisbane Courier, Wednesday 6 May 1931 Edition via Trove https://trove.nla.gov.au/newspaper/article/21697594?searchTerm=School%20rowing

Page 16, The Queenslander, Thursday 7 May 1931 Edition via Trovehttps://trove.nla.gov.au/newspaper/article/23138745?searchTerm=School%20rowing

Page 12, The Brisbane Courier, Monday 4th May 1931 Edition via Trovehttps://trove.nla.gov.au/newspaper/article/21703234?searchTerm=School%20rowing