The 11th Head of the River was conducted on Saturday 7th May 1932 on the Milton Reach of the Brisbane River over a three quarter mile course starting at Davies Park and finishing opposite Morrow's factory.

"The Secondary Schools’ Association has encountered a good deal of criticism for not holding the schools’ races in conjunction with the parent body and at a time when the public would be given a better opportunity of witnessing the event. The authorities maintain they are capable of conducting their own affairs under the Q.R.A. officials, and they they are loathe to have the boys lionised as they are in Southern cities during the rowing season. That too much publicity of a boy’s prowess is apt to act to the detriment of his moral and stabilities in matters more important than sport is the contention of most of the school authorities."

Despite the afternoon start however, hundred of barrackers assembled on river and congregated at the finish to witness a brilliant closing spectacle in the All School's Championship Four.

In a thrilling contest, Brisbane State High School claimed their fourth O'Connor Cup victory. When handing the trophy to State High, The Southport School headmaster, Mr. B. G. Lawrence remarked that whilst he was sorry that his school had come second, it was a race in which no one had disgraced themselves. In the senior race, only 1.5 lengths separated first from last position.

The five competing crews would line up in this order from the North Bank: 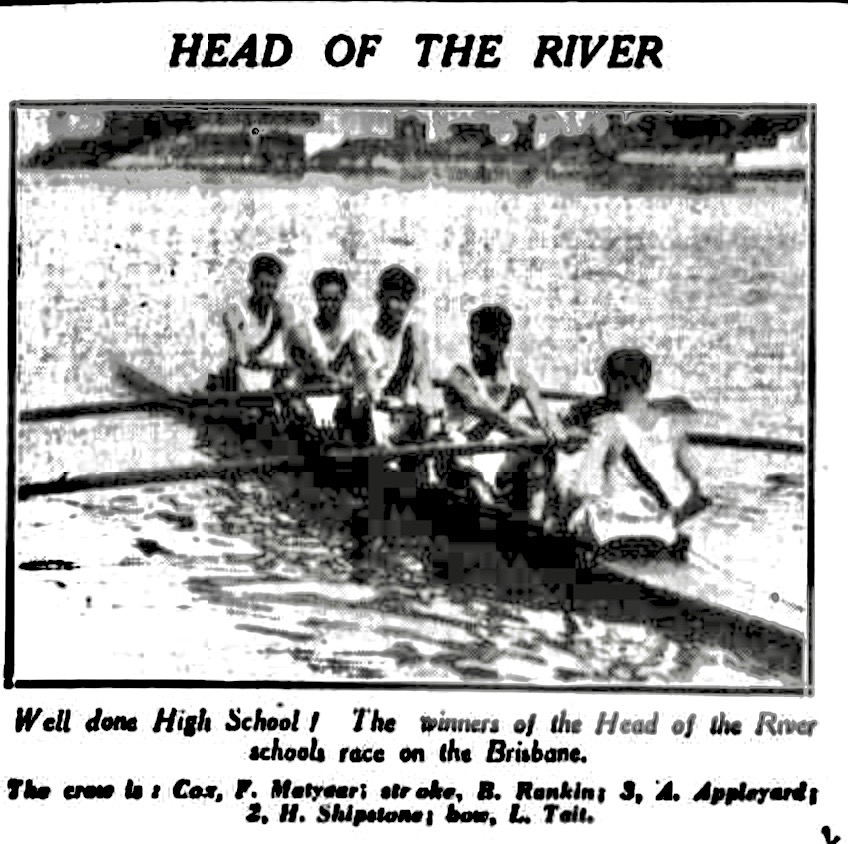 “The first crews got away a little before 12 O’Clock and State High , rowing from No. 1 port, quickly established a handy lead from Brisbane Boys’ College, with Southport and Brisbane Grammar School together next. The two last named crews were rating low and they were soon overhauled by Church of England Grammar School who had been slow to move off the mark.

Maintaining a high rating, State High forged ahead, and with half the distance covered they were more than a length clear of Brisbane Boys’ College with C.E.G.S. on the West End bank, moving smartly along in third position. Grammar School and Southport were inclined to sluggishness, and although they were clearing a long of water they were not striking high enough to keep with the leaders."

“With only 100 yards to go, it was now anybody’s race, and a little over a length would have covered the five crews Church of England, near the southern bank, spurted and seemed to have the race in hand, then Boys’ College spurted, but almost simultaneously State High put every ounce of strength into their last burst and gained the verdict by two feet. Brisbane Boys’ College finished two feet ahead of Brisbane Grammars who were a canvas ahead of Church of England Grammar. Southport being half length away fifth. When receiving the trophy, State High’s stroke (L. Tait) said: “College gave us a great race and we were jolly lucky to win.”

“The wildest enthusiasm prevailed amongst the large crowd of spectators who congregated near the finish and lined the banks of the river along the Milton Reach. Scores of Motor card followed the races along river-road. Barrackers vociferously competed with war-cries, as the gruelling river race finished."

“Brisbane Boys’ College jumped out and secured a lead of a little more than a length in less than 100 yards. Three crews were lying level for second, and Southport, who were very slow in getting away, were half a length behind. Brisbane Grammars moved out from Church of England and State High, and rapidly overhauled Boys’ College and at the Milton Ferry were a quarter of a length in the lead from Boys’ College, who were a length and a half ahead of Southport, who now settled down into a much longer stroke.

Fifty yards from the line Southport and Boys’ College spurted, and rowing neck and neck, both crews reduced the lead between them and Brisbane Grammars, who, however, finished strong, a length a canvas ahead of Southport who were two feet ahead of Boys’ College. State High School were two lengths away fourth and Church of England Grammar were a similar distance astern.”

Page 6, The Telegraph Friday 6th May 1932 Edition via Trove https://trove.nla.gov.au/newspaper/article/180710938?searchTerm=School%20rowing

Page 2, The Telegraph, Friday 6th May 1932 Edition via Trove https://trove.nla.gov.au/newspaper/article/180711264?searchTerm=School%20rowing

Page 3, The Telegraph, Saturday May 7 1932 Edition via Trove https://trove.nla.gov.au/newspaper/article/180701903?searchTerm=School%20rowing

Page 7, The Brisbane Courier, Wednesday 4 May 1932 Edition via Trove https://trove.nla.gov.au/newspaper/article/21959294?searchTerm=School%20rowing