The 1962 GPS Head of the River was conducted on Saturday April 14th 1962 on the Milton Reach of the Brisbane River.

Below are two exerpts from Brisbane Newspapers published in the lead up to the regatta, The Telegraph and The Courier-Mail.

“Choppy water may upset ‘Head’ crews.Five crews have good reason to be hopeful of winning the G.P.S. Head of the River tomorrow - but weather conditions could make a difference in the performance of some eights.

Brisbane Weather bureau in a special forecast yesterday, said that showers and “quite-fresh” south-east winds could be expected on Saturday. This would make the river choppy. The three heavyweight crews - Brisbane Grammar, Southport and “Churchie” - all with eights averaging about 12 ½ stone, must be favoured to fight it out if the water is choppy. Brisbane Grammar are pre-race favourites, and their strong rowing crew have yet to be beaten in an eights race.The Southport School eights is an unknown quantity. In races they have used only a training eight and after a good start they have merely glided to the finish. With two of last year’s crew (Brian McCullough, 14st 3lb, in for the fourth time) and their usual solid training behind them, Southport must have a good chance of winning. “Churchie” will use a new boat this year, a conventional eight built in Sydney for a crew weighing between 12 and 12 ½ stone. They will use the new type “spade” oar, which is shorter and wider than the conventional oar.

With four of last year’s crews place-getting crews and two close finishes with Brisbane Grammar over shorter distances, “Churchie” have an excellent chance of winning their first Head of the River since eights were introduced.

Terrace impress. St. Joseph’s College, Gregory Terrace, again have a lightweight crew, and in number one lane they could run into trouble in choppy conditions. But Terrace, who depend on a minimum number of training hours have impressed all rowing coaches and experts in their training and trial races on the river.

Coach “Tiger” Fleming said yesterday that the crew was as good a combination as Terrace had had. Brisbane Boys’ College rowing in an eight which has won the race three times, must consider themselves a good chance. They are probably at a disadvantage rowing in lane 6, which is said to go through much “dead” water. The race has only been won from this position once, and that was when B.B.C. won in 1957. With a medium-weight crew (average 11st 12lb) choppy conditions could suit, as the crew would be more protected near the south bank. Brisbane State High School has the lightest crew in the race 0 averaging only 10st 8lb. This crew faces tough opposition, but a place would not be beyond them.All crews have been tapering off training this week, and will now rest until the race. The Head of the River race is time to start at 4 p.m., near the William Jolly Bridge and finishes near the regatta Hotel.”

“A complete ban on speedboats and private launches using the GPS Head of the River Milton-Toowong course tomorrow has come as welcome news to the six school crews competing.

A police launch and a special speedboat carrying the course marshall Mr. Bob Longmore and a policeman will patrol the area. Between 15 000 and 20 000 are expected to see the main race at 4 p.m. for which Brisbane Grammar hold slight pre-race favouritism.

Water police advise that the entire area between the William Jolly Bridge and the Toowong rowing shed will be closed to river traffic during the two hour regatta. Only official boats will be permitted to move anywhere on the Milton-Toowong reach. Private craft have been asked to anchor by the south bank well past the finish line. Police will have extra boats on duty to enforce the ban. In previous years crews often have complained bitterly that after months of training their chances were ruined because of swell caused by movement of fast river craft. The weather could help provide an upset to the two most fancied crews, Brisbane Grammar and Churchie. While the weather forecast is for some improvement in the squally conditions, a possible strong fresh which could force an early change in the tide could be to the detriment of the middle crews Grammar and Churchie. Fresh in the river could aid Gregory Terrace who have drawn No. 1 position on the Coronation Drive and perhaps Brisbane Boys’ College who are in No. 6 position on the south bank.

If there is an upset Terrace could provide it but the strong rowing school Brisbane Boys’ College never can be discarded from calculations. It could be a close race throughout with a margin of 60 feet covering the first three crews over the line. One mistake in timing on oarsmanship could cost a crew the race in such a tight finish. On performances in races this year it is expected Churchie will attempt to take the early lead. The solid CEGS combination are getting maximum leverage with their new spade oars and have settled comfortably into their new shell. Over the concluding stages a strong sprinting challenge will certainly come from the whippy Gregory Terrace combination. BBC are reported to have recorded some excellent training times in the last few days in their final preparations over 2000 Metres.”

An Action shot of the 1962 Regatta. The Victorious Brisbane Boys' College VIII is closest to to the camera.

The 1962 First VIII from The Southport School 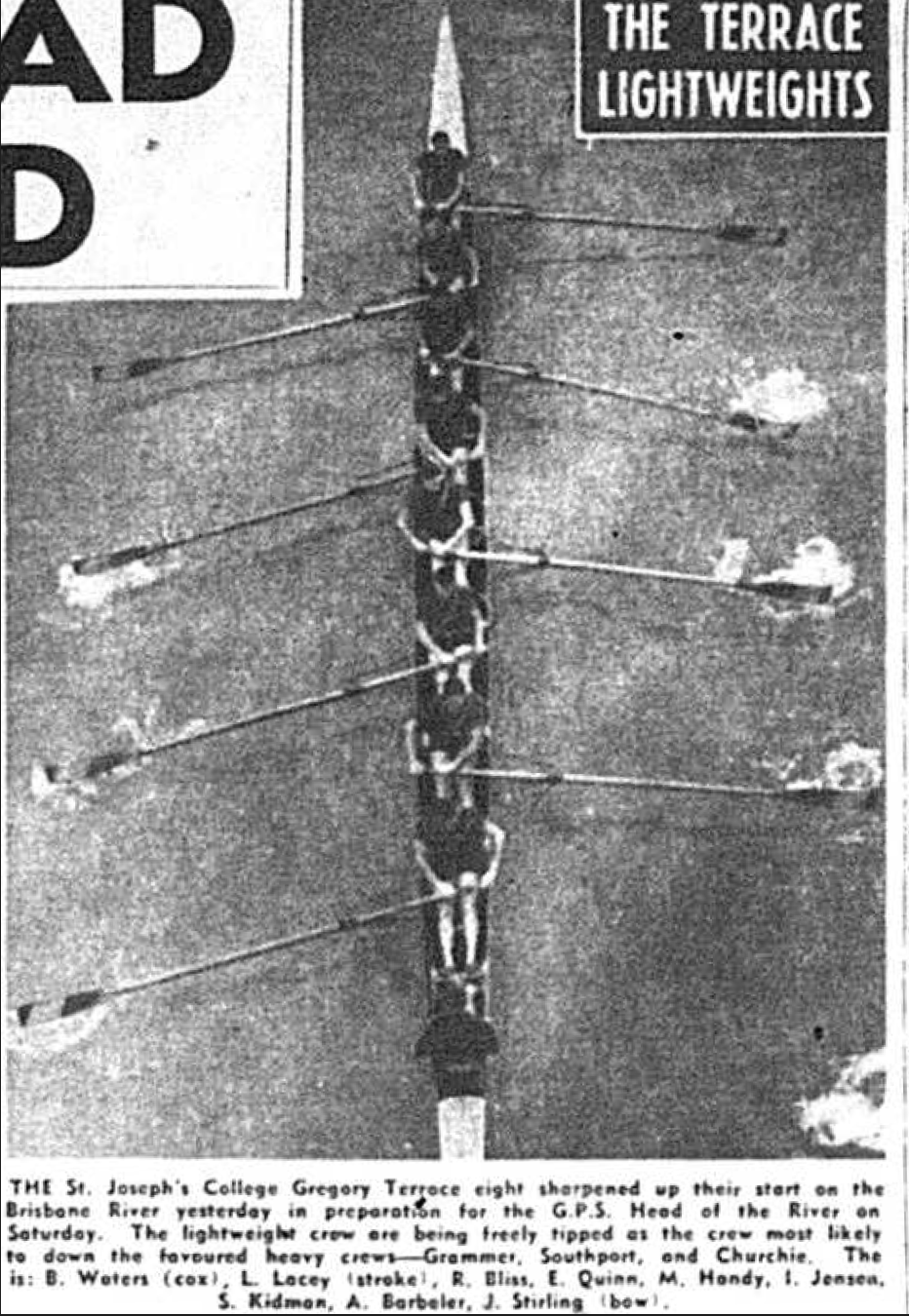 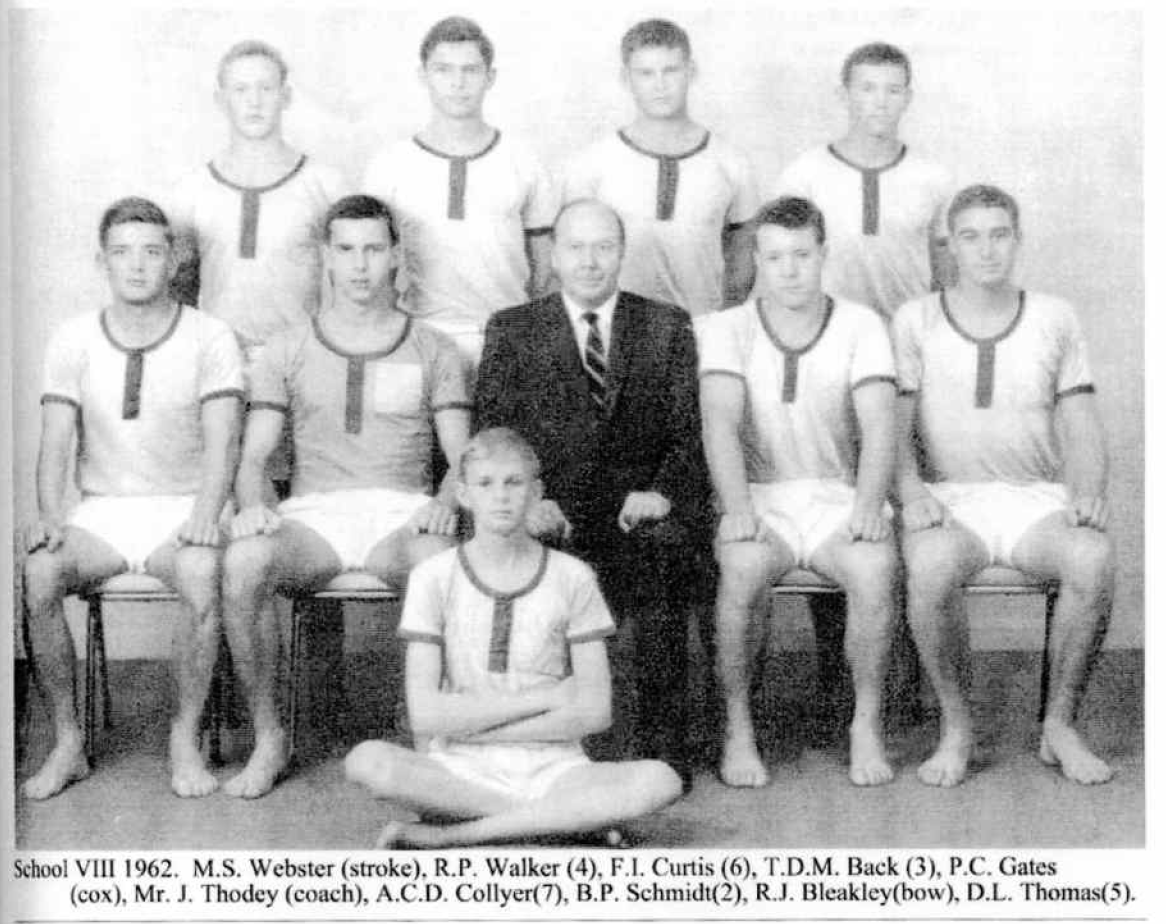 “B.B.C. won one of the most dramatic Head finished by one and a quarter lengths from Grammar, with two feet to Churchie and Gregory Terrace a close fourth. B.B.C. finished strongly with No. 4 man, Ian Robertson (arrowed in picture left) hardly able to sit up. He was out of his seat and tottering in the shell for the last 200 yards, but kept rowing with weakened strokes although out of time with the perfect rhythm of his crew mates.

Magoffin said after the race: “I never like making predictions but I was very confident that my crew could win after their vast improvement in the last three days. “the difference between B.B.C. and the other crews was that we reached peak racing condition during the race. It has been timed perfectly.” B.B.C.’s time for the 2000 metres was 6min 56 sec. Until yesterday the No. 6 lane (Southern bank) was considered a hoodoo lane, as only one crew - B.B.C. - had won from that position which runs though a lot of “dead water.” B.B.C. stroke Douglas Adam gave his family its third Head win. His brother John rocketed to G.P.S. rowing stardowm when he strokes B.B.C. to Head wins in 1956 and 1957.

And in the south…

"The head of the River Eights started at 4 P.M. and C.E.G.S. began well by taking the lead from BGS and BBC. As the race continued it was obvious that it was going to be a battle between these three crews. After 1000m, CEGS was fighting to hold a canvas lead. Soon, BBC began to gain ground while BGS and CEGS rowed almost level in mid-stream. At the finish, B.B.C., rowing magnificiently, had a 2 length margin until one crew member collapsed level in mid-stream. At the finish, BBC, rowing magnificenty, had a two length margin until one crew member collapsed and they finished 1.5 lengths in front. The race had developed into a battle between BGS and CEGS for second place. BGS crossed the line two feet ahead of CEGS. We congratulate BBC on their first win.

Following the Regatta, the annual dinner at the Canberra Hotel, followed by a dance at Riverside Ballroom proved a fitting conclusion to a strenuous season."