The 14th Head of the River was conducted on Saturday 4th May 1935 on the Milton Reach of the Brisbane River.

According to one reporter from the Maryborough Chronicle, "despite the fact that the races were rowed during the morning, there was a large attendance at the finishing point near Grey Street bridge. Boys from different schools turned out in full force to cheer their comrades to victory near the finish, while others followed the three-quarter mile race along River Road."

The race for second crews started at 11.20am and Firsts started at 11.40. Both races finished at the Knoll near the Grey Street Bridge having set off at Davies Park jetty.

The Five crews would line up in the following order:

It was the first time since 1924 the Brisbane Boys’ College crew won the Head of the River title.

By securing the double, Brisbane Boys' College had this to say in their 1935 school newsletter:

"We are very proud indeed of our crews for their double victory, an achievement which has been equalled by only two other schools, Southport and B.G.S.. The Head of the River win is the more meritorious when the fact is realised that in the last week of training one of the crew spent two days in hospital to undergo an operation to his heel, and there were grave doubts as to whether he would recover in time to take part in the race." 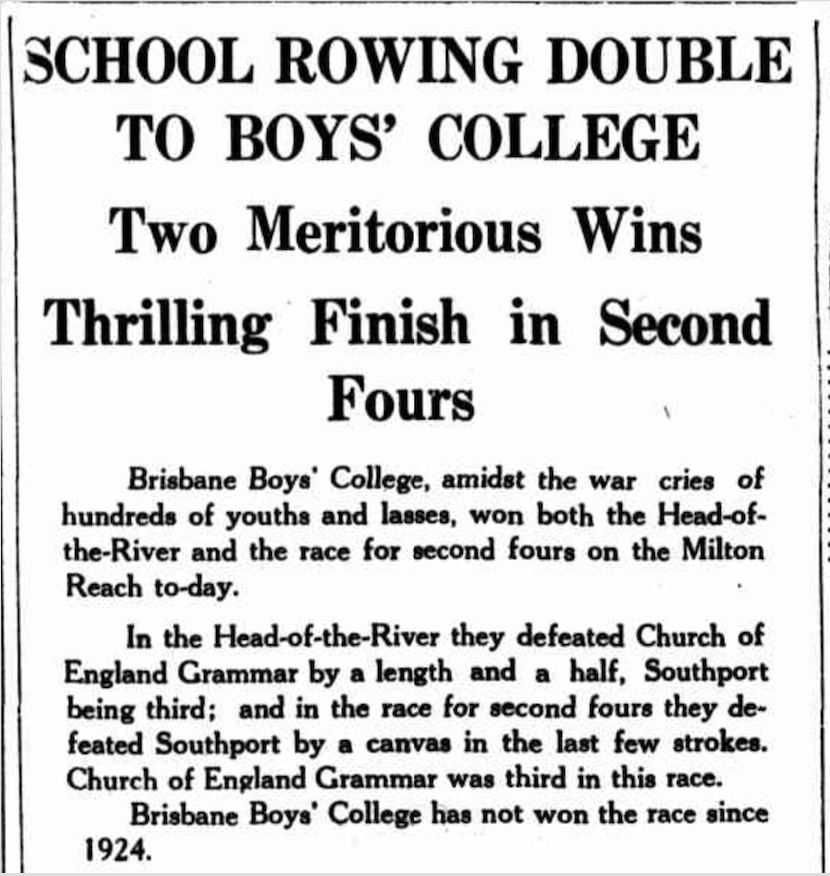 The regatta was conducted by the Queensland Metropolitan Secondary Schools Association.

“Mr Smoothey got the crews away to a perfect start. State High was the first to break the line, followed by Southport rowing roughly and with a terrific rating, and then Boys’ College.

From another excellent start, State High, Southport and B.B.C. crept out to the front in that order. The pace was hot, and B.B.C. were out to gain a lengths lead from the other two crews as early as possible. Rating 38 to Southport’s 40, and State High 34, they soon passed to the front. From then on it was apparent that the B.B.C. crew were an ideal combination and would be difficult to beat.  They rowed like a machine with plenty of length, a fine shoulder life and a good solid finish.

They held the rating at 38 over the whole course, which showed their splendid condition. At the half mile B.B.C. were one and a half lengths ahead of C.E.G.S. also rowing in fine style, though rating much lower than B.B.C. and using a very long reach forward. This seemed to tire them considerably and they were a very exhausted crew at the finish. B.B.C. continued to creep away from the others, and without even a finishing sprint passed the line with two lengths to spare from C.E.G.S., who were one and a half lengths in front of Southport.

The time taken by two watches was 4 mins 43 secs, which we believe is the fastest time recorded on the new course and under slack water conditions.” 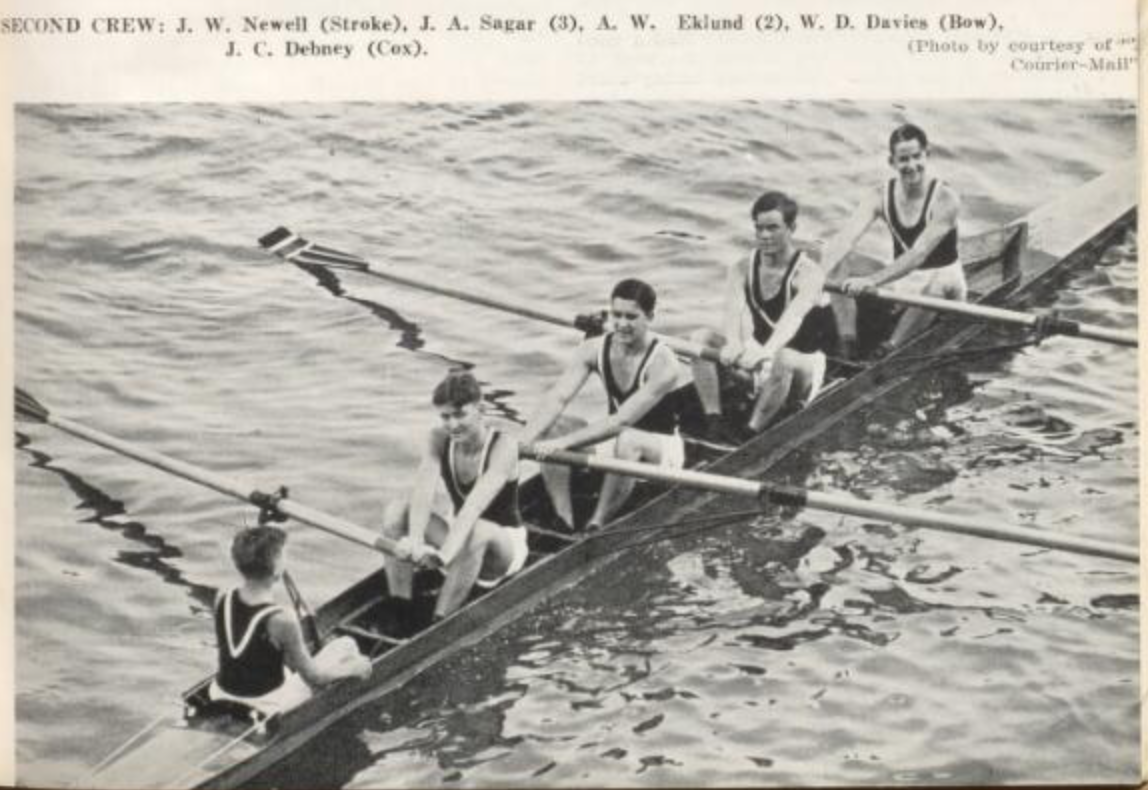 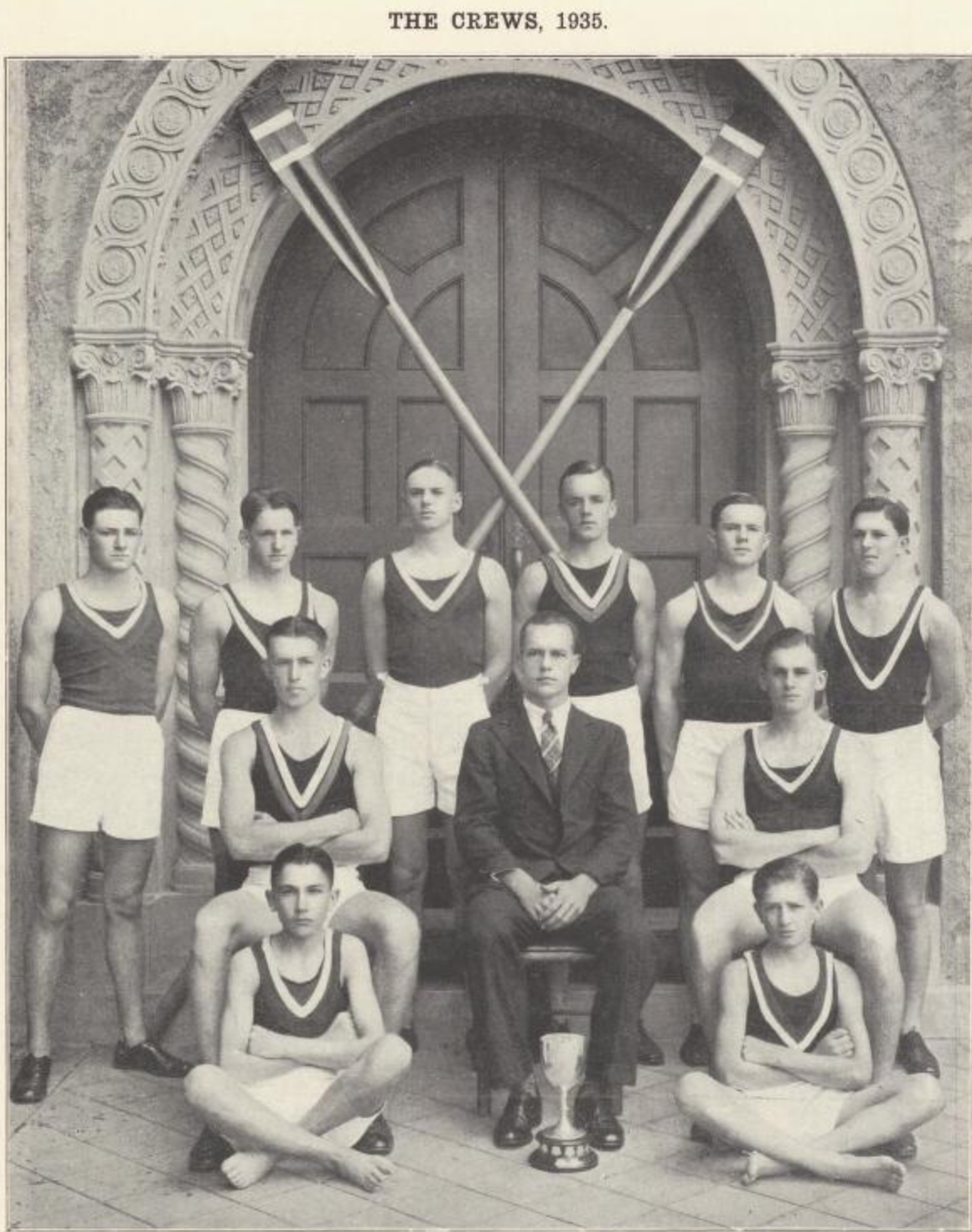 By this time the C.E.G.S. crew had improved their position to be within a length of leaders. For the last quarter mile, B.B.C. gradually came away from Southport, who were rowing well but tiring fast. With an even swing and good timing, B.B.C. went ahead to win by a canvas from Southport, with C.E.G.S. a length further behind.”

Page 10, The Courier-Mail, Thursday 2nd May 1935 Edition via Trove https://trove.nla.gov.au/newspaper/article/36766782?searchTerm=School%20rowing