The Head of Schoolgirls' Regatta (HOSG) was constituted in 1984 after the Principal of Morongo initiated a meeting with interested girls’ schools.

The first regatta was rowed in 1985 at Ballarat comprising 7 events with 16 schools and 240 competitors. These regattas were hosted and run by participating girls’ schools, the task alternating each year.

There is a prescient statement in the 1985 program worth recording: The purpose of the regatta is to allow girls' crews from all schools to compete on an unrestricted basis and we anticipating that it will become the highlight of the Schoolgirls Rowing calendar.

In her 1992 President's report, Susie Palfreyman described the reasons for the establishment of the regatta. During the early 1980's, apart from a few events at the VRA regattas or an opportunity to row at the APS Head of the River, schoolgirl rowing in Victoria was not taken very seriously. Unless a school competed at the National Rowing titles, the highlight of the season was to be invited to race at the APS Head of the River. When that competition was again restricted to APS members, it became apparent that a competition which would cater for all schoolgirl rowers was needed. A meeting was called by Morongo to discuss this possibility, and as a result, a committee was formed and the first Head of the Schoolgirls Regatta was held in Ballarat in 1985.

The restriction on APS invitations arose for a number of reasons. But it is interesting to note that MLC won the Head of the River for girls in 1984, thus being the only non-APS school to ever win an APS Head of the River race.

The second year, the regatta once again was rowed at Ballarat but thereafter from 1987 until the present day the regatta moved to the calmer waters of the Barwon River, thereby allowing the event to rapidly grow.

In the early days from 1985 to 1989 the only senior boats were fours. In 1990 senior eights appeared for the first time.

Quad Sculls were introduced as Division 1 boats in 1993. Then followed the appearance of the Single Scull as a Division 1 event in 2005.

In 1991 the HOSG Regatta Committee was incorporated as an association and in 1993 the timing system was first used. “Active For Life” became the sponsor of HOSG regatta in 1997 and in 2000 Sykes Racing were awarded regatta naming rights.

By 2001 Melbourne Girls’ Grammar, who were to be the last of the host schools, appointed professional event managers SSFD who are assisted by the City of Geelong with temporary infrastructure costs.

In 2002 the HOSG event was managed by SSFD and supported by the Geelong Rowing Association. With the APS Heads of the River Regatta moving to Nagambie, a long-term agreement was entered into between HOSG Regatta Committee, the City of Geelong and the Corangamite Catchment Management Authority to maintain the regatta in Geelong.

Interestingly, the School Snowsports Development Foundation managed the regatta in 2004 and in 2005 and Rowing Victoria undertook the event management task. Participation has grown enormously from its first year of 240 competitors. By 1996 competitor numbers had grown to 1,275; by 2000 there were 1,474 girls on the river, then in 2003 there were 2,151 and now there are more than 2,500 girls rowing at this regatta, making it the largest regatta in the Southern Hemisphere.

GGS remains the most decorated of all Victorian girls’ schools competing at this monster regatta. 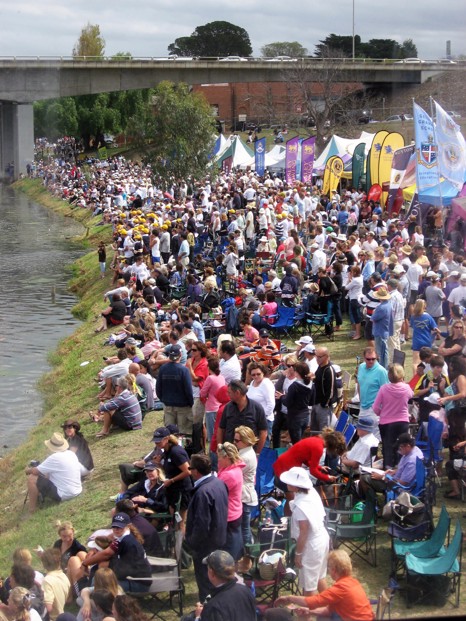