In her 2002 President's report, Susie Palfreyman noted: Our appointed Event Managers SSDF (School Snowsports Development Foundation), took on this daunting task and must be congratulated for their efforts with the regatta being run as smoothly and professionally as in past years. For our committee, having an organisation run the regatta for two years in succession meant that the lessons learned last year were carried over to this year and the burden of having to teach a new group "the ropes" was eliminated.

She also added that the Committee had made representations to the Geelong authorities: This resulted in the river being de-silted to a minimum depth of 2 meters and slightly realigned, making the journey to the start much safer, and the racing lanes fairer.

The Committee also entered into a long term agreement with the City of Greater Geelong and the Corangamite Catchment Authority to maintain the regatta in Geelong. The agreement included course works and improvements because the Committee was of the view that if de-silting works were not undertaken, the regatta could no longer remain in Geelong.

The Geelong Rowing Association also took a more significant role in the hosting of the regatta. 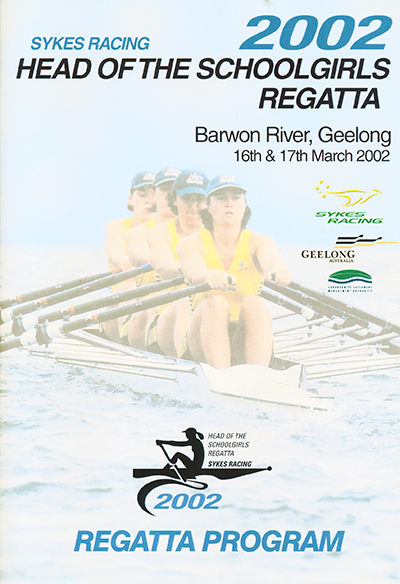