The regatta was conducted in superb weather conditions and attracted a large crowd.

The big change to the Committee was the change of President. The inaugural President Susie Palfreyman stood down at the 2005 annual general meeting and made way for incoming President Josie Millard. The record of Susie Palfreyman was exceptional in building the regatta to such importance. The incoming President Josie Millard, was a successful competitor in the first regatta in 1985. She had an enviable rowing career and being a school teacher, made her an outstanding choice to take over from Susie.

The President's report at the 2006 AGM recorded:

This years Head of the Schoolgirl's was a fantastic regatta, it was exciting to row on the newly dredged and buoyed course. This is the start of the next 5 year contract with Geelong. The new structure for the Friday afternoon session worked well and the change over to the new regatta control system made the regatta run very smoothly. Sadly Frank Covill has resigned from his position as Regatta Executive. We thank him for his hard work and the enormous amount of experience he brought to the committee.

Grant Cosgriff was appointed as the new Executive Officer.

A pdf of the finals results can be found through this link. 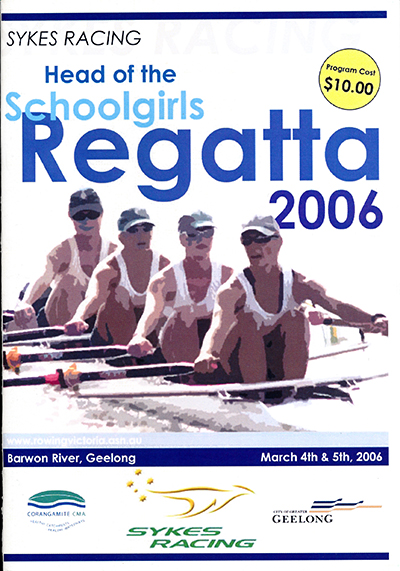